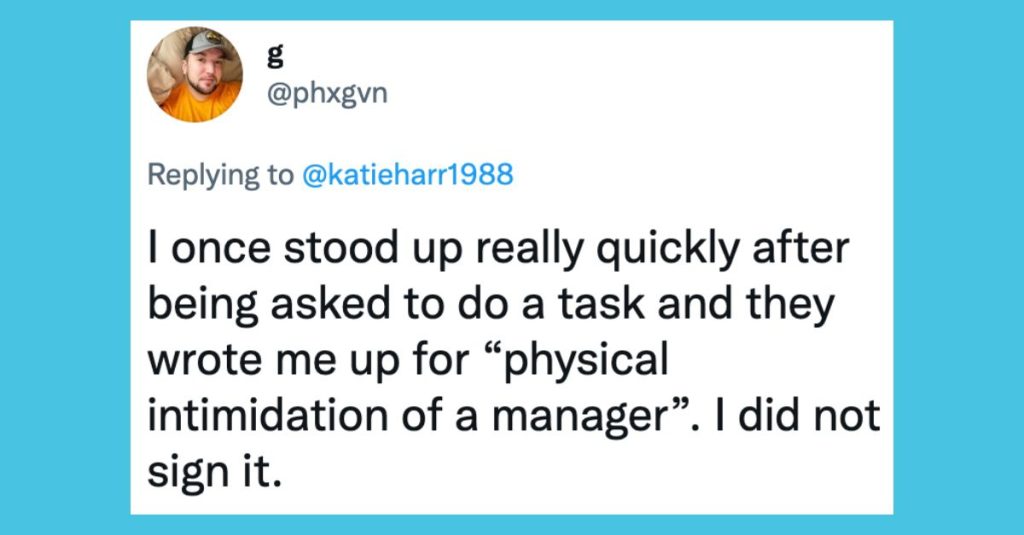 What’s the Weirdest Reason You Got Into Trouble at Work? People Responded.

Never underestimate the stupidity of some bosses and supervisors in the workplace.

I’m sure you’ve been there at one point or another in your working life when you’ve been reprimanded for something on the job that was just totally absurd.

See if they are as good as these gems.

And not a minute more.

I had a week where I worked 39.5 hours because of an appointment and I got a “verbal warning” via email and a long talking to by my manager: “I’m not going to tell you that YOU HAVE TO work 40+ hours”. Ignoring weeks when I did 60.

I worked 40s exactly until I quit

This is just weird.

I was told off for using a word in a report that my boss didn’t know (“minutiae”). I asked her to give me a list of all the words she didn’t know so that it wouldn’t happen again.

3. You did the right thing.

I asked for day off to attend my 23 year old cousins funeral. I was told if I took the day off not to bother coming back. I went to the funeral.

Worked as a server/bartender and was in trouble/eventually fired because a regular who spend hundreds there each time found out I am a veteran and “was a satan sent baby killer here to destroy the Christian values”. I would of sued but a hurricane flattened the restaurant.

Oooh I’ve got one! I worked for a horrible medical trade mag in PA and my boss told me I was in trouble because I left work 30 min early. I had signed a contract to work 8 hrs a day but he expected us to work 9 hrs anyway. So I was in trouble for only doing 30 min of free work

At the very beginning of the pandemic my boss asked me not to wear a facemask because it made others uncomfortable..I work in a hospital

A man I worked with screamed & threw his pen across the office because I’d sent him five emails in one day, which he said was too many, & then came to give me a lecture on email etiquette & flooding people’s inboxes (all of my emails were replies to emails he’d sent me that day)

I once stood up really quickly after being asked to do a task and they wrote me up for “physical intimidation of a manager”. I did not sign it.

9. Not doing anything wrong.

You can’t say that!

Was told by my boss I couldn’t say someone was Asian when indeed they were Asian.

Telling a customer what time we closed at. The company owner felt this was classified information that could be used for a robbery. I wish I was making this up.

It’s a good movie, but jeez…

In a video shop 20 or so years ago, I turned off Gladiator and put on a different film. The Assistant Manager gave out to me because Gladiator was the only film he wanted shown in the shop. When it ended he put it on again. Every day.

Did you ever get in trouble at work for something stupid?