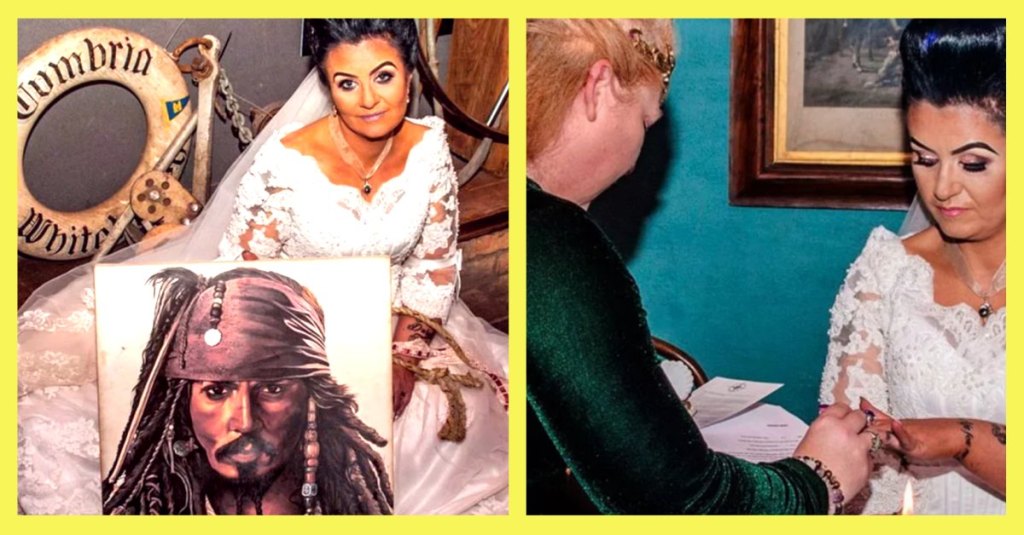 Update: The Woman Who Married A Pirate Ghost Has Gotten A Divorce

Last year, we told you about Amanda Sparrow Large, (née Teague), the Irish woman who married a pirate ghost–specifically, a Haitian buccaneer named Jack who was executed for thievery in the 1700s. Like in every classic love story, Amanda, 46, and Jack, 300-ish, faced many obstacles in the way of their love–like the fact that one of them has a body and the other does not. Despite these obstacles, Amanda and Jack were determined to build a happy life together.

But now, a year and a half later, we’re sad to say that these obstacles were just too much to overcome, and the couple has officially split. Apparently, a pirate’s life was not for her.

“So I feel it’s time to let everyone know that my marriage is over,” the mother of five wrote on Facebook, according to The Irish Mirror.  “I will explain all in due course but for now all I want to say is be VERY careful when dabbling in spirituality, it’s not something to mess with…”

Before meeting Jack, Amanda was already well-known as Ireland’s only female Jack Sparrow impersonator, and she was committed to the performance. After first seeing Pirates of the Caribbean in 2015, Amanda fell in love with Johnny Depp’s swashbuckler, so much that she wanted to become him. She got a full Jack Sparrow costume, authentic pirate tattoos, fitted gold teeth, and even changed her name to “Amanda Sparrow Teague.”

This was when Amanda’s love of pirates took an unexpected turn. Amanda says that she first met Jack when he appeared beside her in bed. According to Amanda, Jack told her that he’s dark-skinned, has jet-black hair.. he was dark-skinned with jet-black hair. She continued to have contact with Jack for about six months, until she discovered she had feelings for him.

But life wasn’t all rum and gold doubloons. Early in their relationship, Jack appeared to only be interested in Amanda for casual sex. Amanda wanted a firm commitment, and Jack appeared to come around. In 2016, Amanda chartered a boat to take her and Jack to international waters, where they were married by a shamanic priest. (Technically not a legal marriage, sadly.)

Just two weeks after their wedding, Amanda began having health problems. “Before the marriage, I worked, I was healthy, I worked out, I was very healthy for my age,” Amanda told Inside Edition. After several emergency room visits, surgeries, and even a near-death experience, Amanda began to suspect that Jack’s intentions weren’t entirely pure.

When Amanda tried to research the paranormal to find answers, she says Jack tried to physically stop her. “He did everything he possibly could to prevent me from finding things out, like when I was talking to somebody, the call would drop. I would have a particularly bad day if I were to meet up with somebody he didn’t want me to meet up with,” she said.

Eventually, Amanda learned that spirits like Jack take energy from the living in order to exist in the physical world. “Unfortunately Jack was taking far too much energy and literally draining me and pretty much just using me for his own selfish intentions. He was a pirate, what he did was steal when he was alive. Now he’s stealing or draining energy, it kind of makes sense when you think about it. I can’t believe it took me this long to figure it out.” (Total landlubber move.)

When Amanda finally confronted her pirate ghost husband, things turned ugly. “He got really really nasty and showed me his true side,” she said. “He got quite aggressive over it and was not respecting my free will […] and he just wasn’t taking no for an answer.”

She has since ended the marriage, and relocated from Drogheda to Belfast. But Jack isn’t quite ready to move on.

When you divorce a ghost, you don’t need a lawyer; you need an exorcist. Amanda says she’s investigating all options for cutting off contact with Jack, including exorcism. “It’s like a case of a possession or a haunting, where a spirit doesn’t want to move on so steps have to be taken to make sure the spirit moves,” she said.

Despite her love story’s unhappy ending, Amanda says she doesn’t regret marrying a ghost. Not only that, she hopes her story encourages more people to pursue romance with spiritual entities.

“I hope by me coming out, it will encourage others to not feel alone or afraid,” she told People. “It’s not all like the entities in other horror films, there are loving caring spirits out there, too, you just need to know what you’re doing.”

But if you’re thinking about marrying a pirate ghost, at least consider the statistics first: literally 100% of all pirate ghost-human marriages end in divorce. Is that a chance you want to take?

If you’d like to purchase Amanda’s autobiographical memoir, A Life You Will Remember, you can do so here.