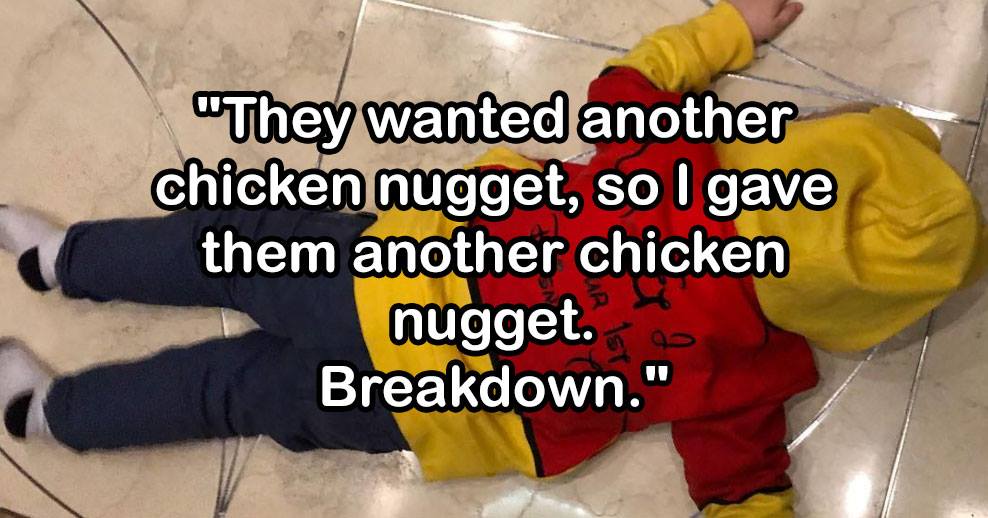 Parents Share The Irrational, Hilarious Reasons Their Toddlers Melted Down

We’ve run articles like this before, but it never gets old. We know that small children aren’t the most reasonable age group. And yet, their capacity to get pissed off about a seemingly infinite number of things will always be funny.

In a recent Reddit thread, a Redditor asked fellow parents to share the most illogical reason their little one had a freakout. The response was a huge, with over 13,000 replies and 57,000 upvotes. And somehow, even though this question has been asked on the Internet many times previously, the answers will still surprise you. When it comes to getting angry, toddlers are endlessly creative.

Here are 15 more kids who got angry when their parents made a perfectly reasonable refusal. You can’t reason with them, you can’t argue with them, all you can do is hold your ground and accept it.

“My son wanted me to wrap him like a burrito for bed. I did, but he was upset that I wrapped him like a bean burrito, crying, ‘I want to be a chicken and rice burrito!'” – Bro4shoe

2. Thanks for standing in the way of scientific progress, Mom.

“Our 1.5-year-old son had a meltdown because I wouldn’t let him pour his apple juice on the cat.” – BrittanyBallistic

3. The grass is always greener in the other car.

“My son lost it because I wouldn’t let him get into the car parked next to us.” – jeannes83

“My 2-year-old son heard my wife crumple up a receipt and for the next hour lost his mind that we had a cookie we were holding out on him. No amount of explaining could fix the situation.” – flypaper1001

“My little guy, who loves hats, was very upset because he wanted to wear two hats. At once. To bed.” – SailorJupiter80

“From the backseat my enraged toddler sobbed, ‘He’s looking out my window!’ He was mad because his brother was looking out of ‘his’ window instead of the other one.” – RavnNite

8. The Crayola company is a big jerk.

“Our toddler cried because we didn’t have the hamburger bun color in our 120 colored pencil set.” – mryazzieyazz

9. An even bigger jerk is physics.

“My kid screamed at his balloons for an hour because they wouldn’t stop floating.” – PRNmeds

10. But the biggest jerk of all? Time itself.

“My wife is four months older than I am and my 4-year-old daughter got upset because she wanted me to be older than my wife.” – amishpapa

“Our daughter cried because she didn’t get to go to her parents’ wedding — seven years before she was born.” – LaziestGirl

“Kiddo flipped out because the cat cheated in a game they were playing.” – johnyann

13. Even when you do everything right, you’re still wrong.

“Inconsolably screaming: I WANT NOTHING” – XenusMom

“My toddler loves being tickled, so I was tickling him one day. He let out a huge fart and immediately started crying and screaming. I asked him why he was screaming and he replied, ‘I was saving that for later.'” – ShutTheFrontDoor__