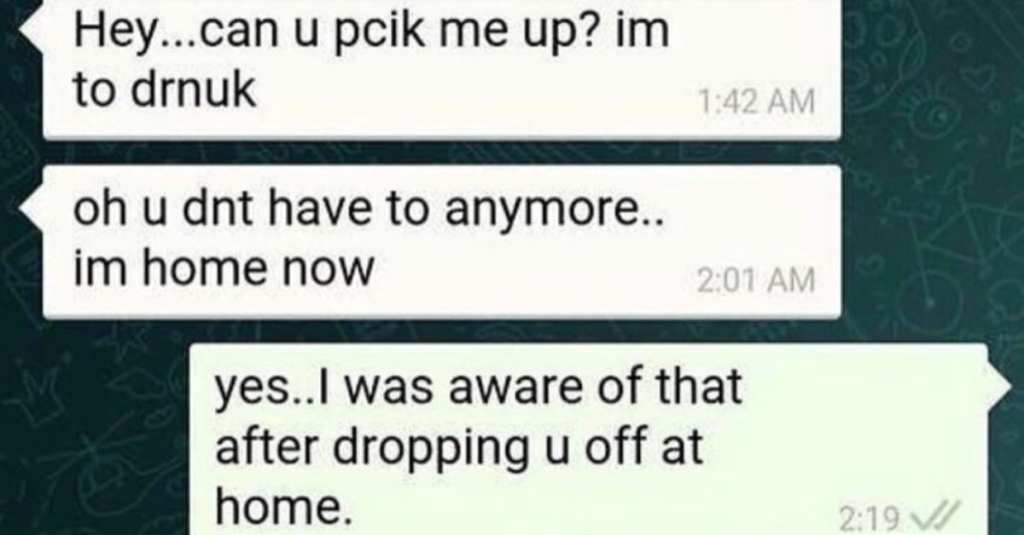 You’ve been a little on edge lately and you need to blow off some steam…with booze!

It’s okay. Most of us do it from time to time when things get a little bit hectic.

But these people…they went a little bit overboard with the alcohol and now they’ve been put on blast for the whole world to see…which is great for us, because we can laugh at all of them!

1. You did the right thing.

And we’re gonna stand behind you on this one.

2. You can never trust yourself again.

What were you thinking?!?!

Woke up this morning with a cup of water and a note next to my bed saying “for hungover me.” I took a sip and it was vodka. Drunk me is such a douche.

3. Alexa can’t help you out out this one.

But that would be nice, wouldn’t it?

my dad last night, completely shitfaced, was trying to get out of the backseat of my car and he gave up, put his head against the car door and said ‘alexa, please get me out of here’

WE DONT EVEN HAVE AN ALEXA IN THE FIRST PLACE

4. You are clearly winning at life.

And we salute you!

I don’t play by your rules. To-go margs are allowed if you’re stealthy enough. pic.twitter.com/RCK8sf6JcO

You can give it a shot, though…

Oh, boy…must’ve been a long night.

Very drunk I guess from Badfaketexts

7. You know it’s bad when you’re writing notes to yourself.

Have you ever done this?

Thought you guys might like this note my friend wrote to himself before going out last night ? pic.twitter.com/NCbqG8W9Pj

Have a great lunch!

Thanks for wasting my time!

My girl is drunk, I woke up to 12 missed calls and texts saying that she’s crying so obviously I was mad worried so I called her to make sure everything was straight.. she’s crying cos her friend took a bite of her burger https://t.co/kpwcjT88rk

a few weeks ago I faked an Irish accent at the bar & ended up meeting a guy from Ireland that night. since then I contemplated if he was faking it or not & I just found him on tinder and his bio says if he gets drunk enough he fakes an Irish accent. I’ve found my soulmate y’all!!

11. I wish there was some video of this.

He sounds like a pretty cool guy to me.

You don’t know what fun is until you’ve witnessed a drunk on the Edinburgh to Glasgow train screaming “A fucking hate hedgehogs, come at me ya jabby wee cunt” while angrily circling a hairbrush that’s been dropped on the floor…

This one really hurts!

Omg so drunk… from Badfaketexts

But at least you got a little bit of sympathy.

y’all… i just hit a new low. i’m in an Uber hungover as fuck, i tried holding in my puke but i couldn’t, opened the door at a red light and puked, told her “sorry, i’m pregnant and my morning sickness is bad” and she was like “aweeee!!” LMAO IM GOING TO HELL

Do you have any funny drunk stories about things that happened to your friends?

Or are you willing to admit the dumb drunken things that YOU’VE done?

Talk to us in the comments. We’d love to hear from you!