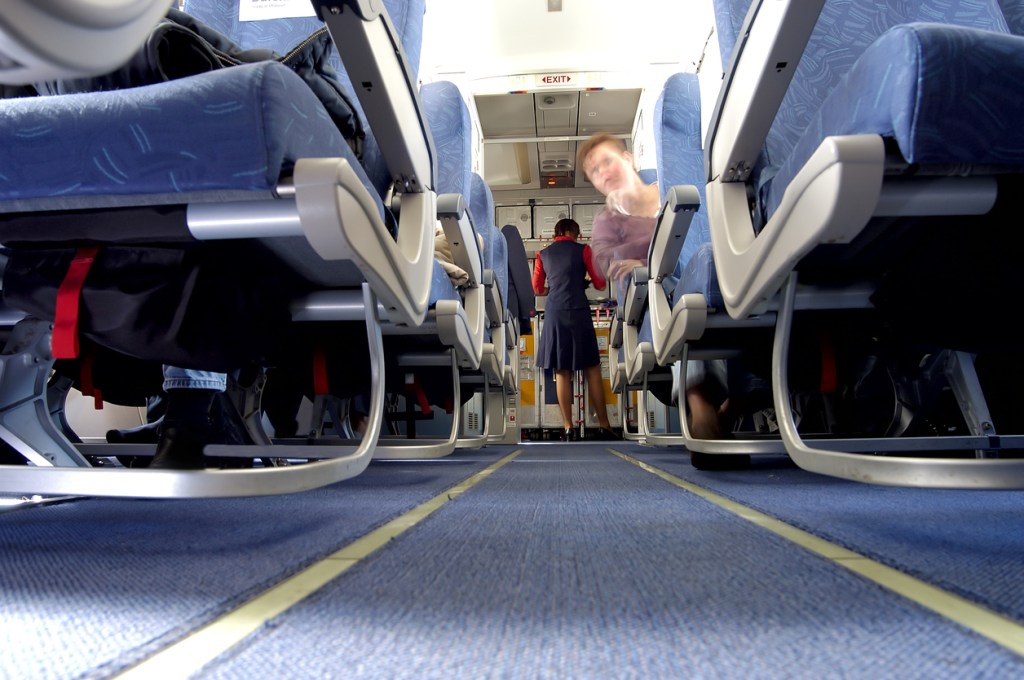 Are you a member of the Mile High Club?

What’s your ninja rating? Did you get away with it?

These 8 AskReddit stories seem to imply that even if you didn’t get “caught,” you were probably a little more obvious than you might have thought.

Also, those bathrooms are gross:

On large commercial planes it can go unnoticed, but as soon as people take their time in the toilets it can become a security hazard, so we watch out for those people and it soon becomes obvious what they’ve been up to…

Was once flying from Copenhagen to JFK.

I have a tendency when I take a long haul flight to not sleep the day before, and then I just sleep the whole flight.

So, I end up sitting with this flirting couple: me on the aisle seat, them in the window and middle. I pull out my earplugs and sleeping mask and proceed to just go to sleep.

After a couple of hours, I feel something bumping into me. At first, I ignore it, but then it just keep going on.

I lift my sleep mask to see whats going on.

Lo and behold, they are doing it right there next to me under the blanket.

They kinda froze and stopped when they realized I was up. … They just stared at me, thinking I was half asleep, which I wasn’t.

I went back to sleep, and they continued.

People sneaking discreetly into the lav happens every now and then, I wouldn’t say it’s a weekly event, or even monthly, but really just every so often.

It’s pretty obvious when people disappear one at a time…

You see two empty seats where a flirty couple was sitting, and an occupied lav, and assume the guy isn’t in there with the girl to help her through a bout of motion sickness.

I generally don’t care enough to do anything about it, as long as they’re discreet and don’t stay in there for a year.

If you’re going to do it, make it snappy. Other people need to pee.

I’ve had people ask me if they could go to the lav together…I just tell them no, because I don’t want to be implicated in any of that.

I think you can get into far more trouble fooling around in your seat area. Don’t bother putting a blanket down to hide the handy or finger blasting in progress, we can tell.

If you get a salty ass old senior mama, she’ll probably call the pilots and have LE meet the plane to bust you for indecent exposure.

Planes are nasty though.

I don’t want to join the MHC, though I do understand the mystique for people who aren’t on planes all the time.

Just keep in mind that all the surfaces in the lav are cleaned dubiously at best, and the smell from the blue goo can be pretty aggressive.

I’ve only had a couple of occasions where they have been caught:

New girl cabin crew (20 yrs) saw a couple going in, gave a knock, no response, so she opened it from the outside (all doors can be unlocked from the outside, so be warned!)

To her shock is a young man who resembled Edgar Prado getting stuffed by a man who could have easily snuck his way into the Russians female weightlifting team.

The other time was a risky couple who decided she would just give oral right there, in their seats.

Now that might be legit on a night-time, long-haul flight.

This was middle of the day. In summer.

It was the passengers who alerted the staff to the man’s dog-roll being guzzled by this girl, going at it like a pelican with a flounder stuck in its neck.

They were met by security on arrival, who then escorted them off. Not sure what the result was.

Being Greeks, they probably patted her on the back and sent them on their merry way.

Two occasions in five years of this type of flying.

Either it doesn’t happen much, or there are some ninja effers out there.

The one experience I’ll probably never forget is on a flight from Australia to Vietnam.

A young couple were very frisky with one another since the beginning of the trip. Turns out it was their honeymoon.

Well, some of the flight attendants decided to give the newlyweds a banquet full of goodies that we all put together. We included goods that are usually reserved for the flight staff (pre-packed cakes, beers, junk food, and other sundries).

Anyway, Debbie goes down to their row with this nice basket with all the goods in it, and we’re all watching from the flight attendant service/wait area, big smiles on our faces.

She reaches their row (at the far end, pretty much at the back), she turns to them, jumps, says something to them, bows a couple of times and walks briskly back towards the rest of us.

Turns out the Ms. was giving the Mr. a nice job of blows.

Good ole Deb said her brain short circuited and all she managed to say was: “Oh! Lovely penis, sir. This is a gift on behalf of the staff for you and your wife. Thanksbyeee.”

We’ve had this happen a few times in economy and first, but only because they haven’t been at all inconspicuous about it.

I usually don’t care as long as they’re not disrupting other passengers, although some of my co-workers do.

We once mistakenly thought there was a couple having sex, because we heard a man grunting.

We knocked on the door a few times…

Turned out he was just severally constipated.

I can generally tell, because the poker-faced man will exit first to see if the coast is clear, followed by a giggly woman.

Never had it happen in the almost three years I’ve been working.

I did find googly eyes on my Safety Demo Oxygen Mask, though

Like what you read? Check out these articles too!

15 Photos Of Victorians Being Silly