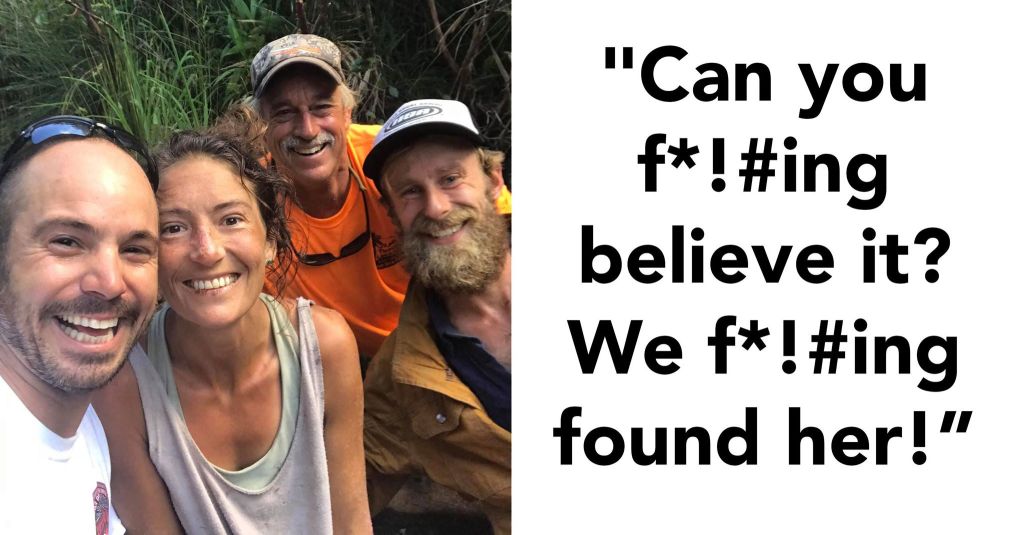 Outside of finding a raccoon foraging through our trash cans, most of us probably don’t come into contact with nature in our day-to-day lives. We live in such comfort that it’s easy to forget just how dangerous nature can be if we don’t take the proper precautions. Well here’s a story that will remind never to underestimate Mother Nature–or at least not to forget your phone when you go into the woods.

Amandas Eller is a Maui-based yoga instructor and physical therapist and an experienced hiker. Back on May 8th, Amanda drove to the densely wooded Makawao Forest Reserve for what was supposed to be a three-mile hike–brief enough that Amanda left her phone in the car. During her hike, Amanda stopped to meditate, then took a nap, but when she woke up her surroundings were unfamiliar. She was lost.

And then things started going really wrong. Her shoes were washed away in a flash flood as she was trying to dry them. She developed a sunburn that later became infected. And on the third day after going missing, Amanda fell, breaking her leg and tearing the meniscus in her knee.

With no supplies, Amanda was forced to forage for food and water. She ate berries and guava when she could find them, and drank water when she didn’t think it would make her sick.

“The cold was what she said was the worst,” said Katie York, a childhood friend from Maryland who flew in to assist with the search. “She slept in a boar den and covered herself with ferns and anything she could get her hands on. The main thing she wanted was for the rains to hold off so that she wouldn’t be cold and drinking muddy water.”

But wait, what does an infected sunburn look like? Glad you asked.

Meanwhile, a massive rescue operation was underway to locate Amanda. Her car was discovered on May 9th, and she was reported missing shortly after. Maui fire and rescue personnel coordinated a search effort until the end of the 72- hour on missing-person assistance, after which it was handed over to volunteers.

The searchers scoured as much of the reserve’s 2,000 acres, sometimes with up to 150 volunteers on hand. One search coordinator, Chris Berquist, was fired just days into the search because his boss was frustrated with how much time he was spending on it. For his part, Berquist was glad to be freed up for the search.

Amanda’s family also used social media to raise awareness about her story. They set up a Facebook page called FindAmanda, and a GoFundMe page that raised over $75,000.

The seventeen-day search was definitely trying emotionally, but Amanda’s parents say they stayed positive. “I felt in my heart she was alive,” Amanda’s mother Julia Eller told KHON. “I never gave up hope for a minute. Even though at times I would have those moments of despair, I stayed strong for her ’cause I knew we would find her if we just stayed with the program, stayed persistent and that we would eventually find her.”

For her part, Amanda continued to fight for survival, it wasn’t always easy. Finding food was a constant challenge, and Amanda ended up losing 15 pounds during her ordeal. Amanda eventually reached a waterfall where there was no food.

“She did get to a place where she thought she was going to probably be found dead at that waterfall,” said Sarah Haynes, a family friend. “She didn’t know how much longer she could make it.”

By day 17, the rescue operation had been using drones and even helicopters to search the forest. Pilot Peter Vorhes, who was piloting a helicopter paid for partly by GoFundMe donations, was nearly out of fuel when he got a call to turn right. In a deep ravine between two waterfalls, there was Amanda.

One rescuer, Amanda’s friend Javier Cantellops, described the moment: “We all look to our right, and out of the woodwork, man, you see Amanda Eller, my friend, coming out, waving her hands. It was unbelievable, dude. And we all of course lose it.”

Cantellops never really doubted Amanda’s chances of survival. He told reporters that her work as a physical therapist and a yoga teacher prepared her for the rigors of the situation. “And those two things together are tied with her knowledge of the local vegetation there and the plenty of water, our beautiful tropical climate,” he said.

Amanda was taken to a nearby hospital to receive treatment for her injuries and the infection, and has already been released. From the hospital, she shared with reporters how she ultimately survived.

“It came down to life and death and I had to choose. I chose life,” she said. “I wasn’t going to take the easy way out. Even though that meant more suffering in me for myself,” she said.