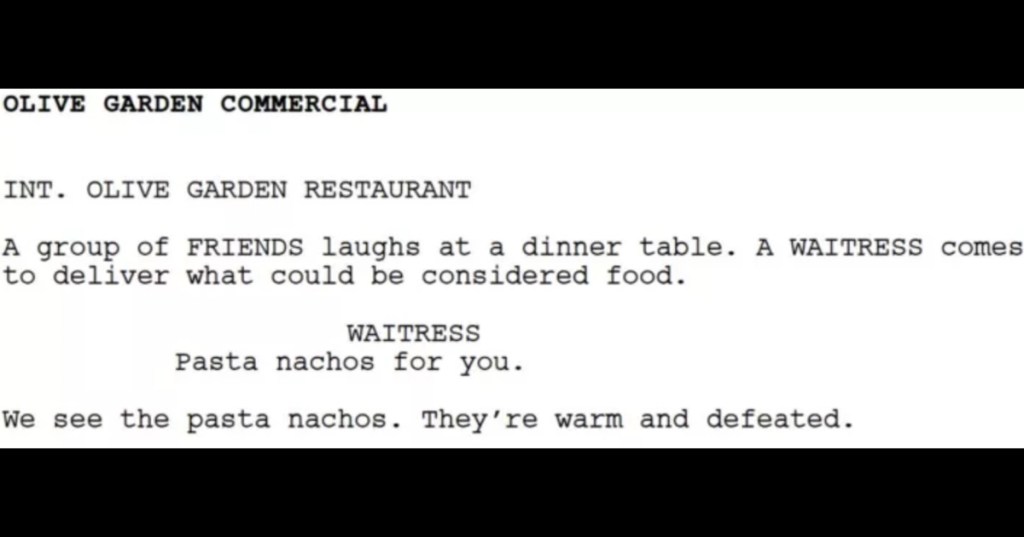 Writer “Forced” A Bot To Watch Over 1000 Hours Of Olive Garden Commercials, And Then Asked It To Write One

We live in a world that’s making constant innovation in the field of artificial intelligence. And yeah, we’ve nailed the simpler stuff, like smart ovens and smart watches, but whenever an A.I. tries to mimic complex human behavior, it’s hilarious. Do you remember when the folks over at Botnik programmed a “predictive keyboard” to write a chapter of a new Harry Potter book? The machine spat out such literary gems as this line: “He saw Harry and immediately began to eat Hermione’s family,”

It’ll be a long, long time before a machine is able to write as well as a human, if it ever is at all. But in the meantime, comedian Keaton Patti poked fun at the concept of predictive computer writing. In a Twitter thread that’s now gone massively viral, Keaton imagines what it would be like if TV commercials and movies were written entirely by a bot.

The first script and most popular is a two-page script for an Olive Garden commercial. As with all his other fake scripts, Patti claims to have fed a computer “1,000 hours of video” to concoct the following masterpiece: 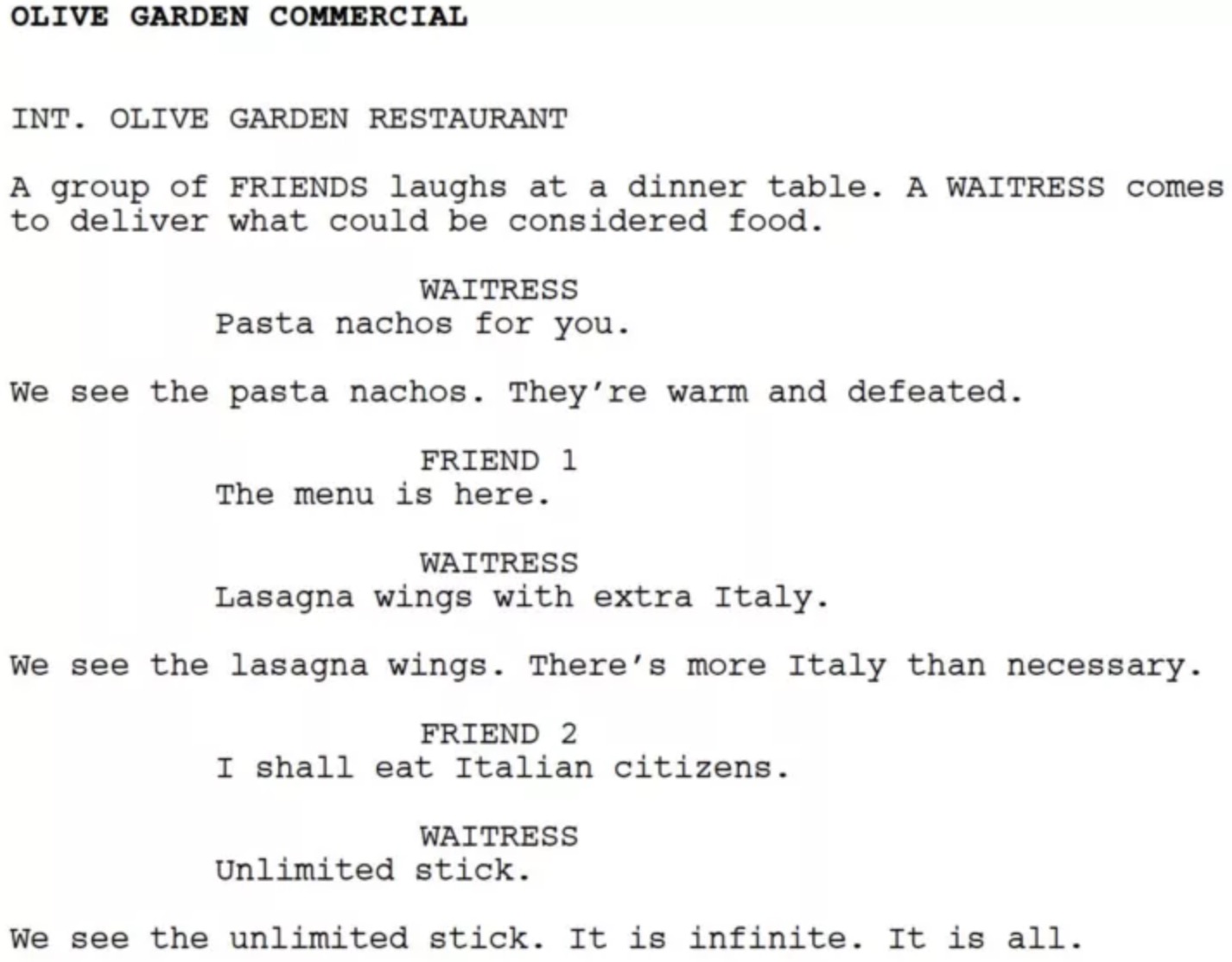 Lasagna wings? Still sounds better than anything you could get at an actual Olive Garden. The ad continues: 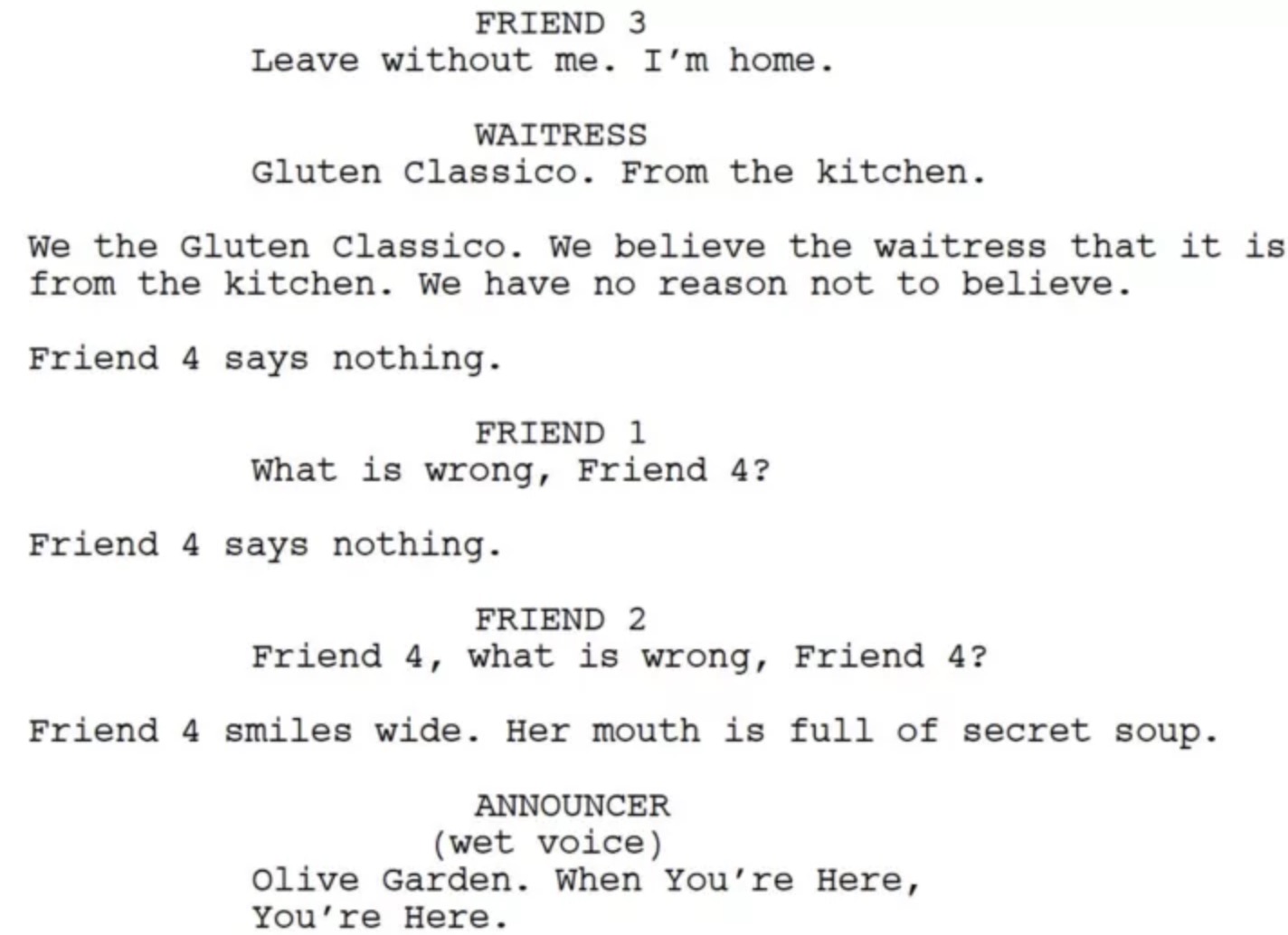 “When you’re here, you’re here” is the most honest slogan Olive Garden could possibly have.

Then, Patti turned his attention to the Transformers films, which, to be fair, are so formulaic they might as well be written by a computer. In a scene from “Transformers 6,” he imagines a much less ambitious sort of movie. 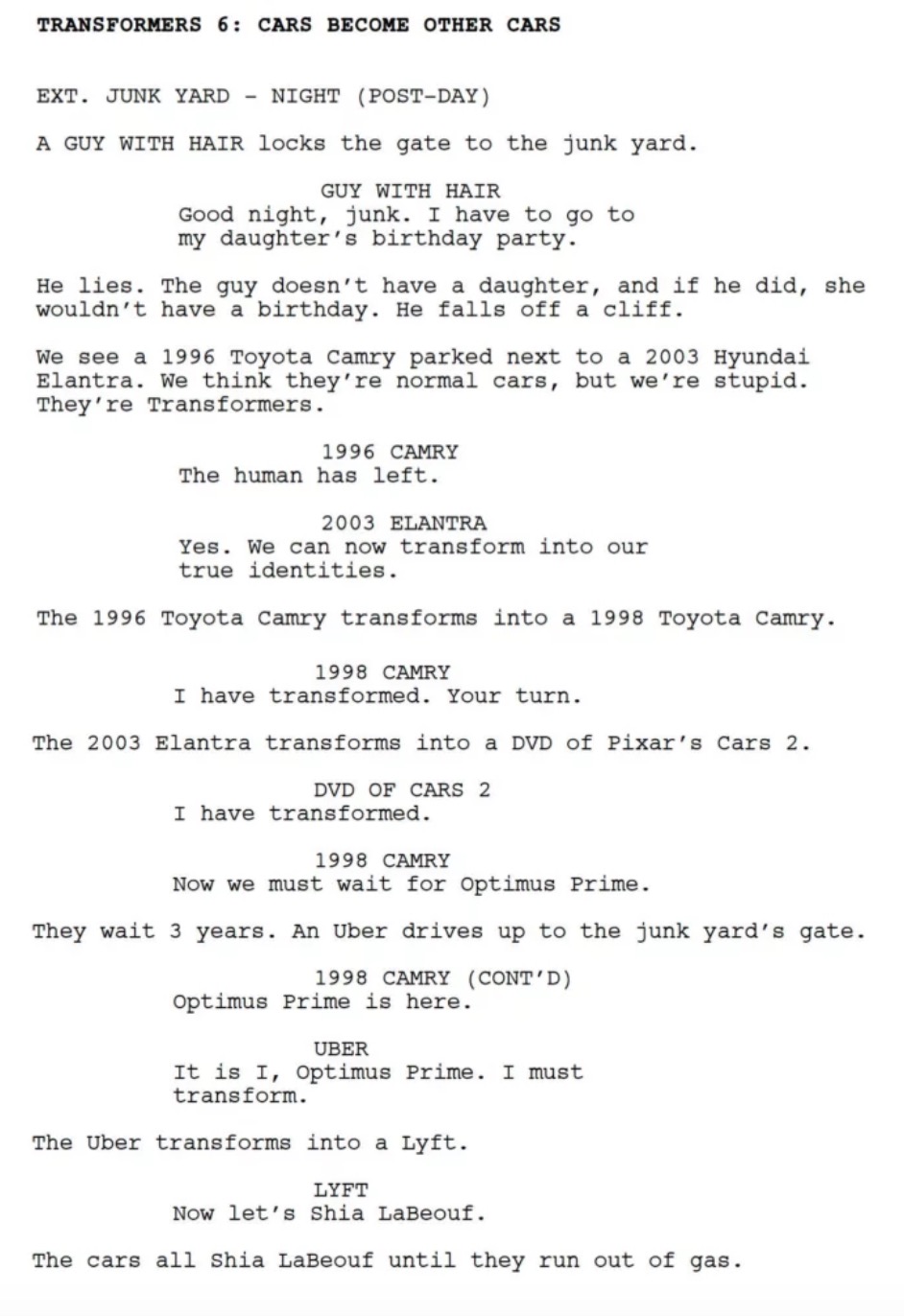 After that, the Saw movies get the “written by a bot” treatment. Here’s a scene from Saw 9: Sawitdaba Da Bang Da Bang Diggy Diggy, with the main character Becky Sexwoman. 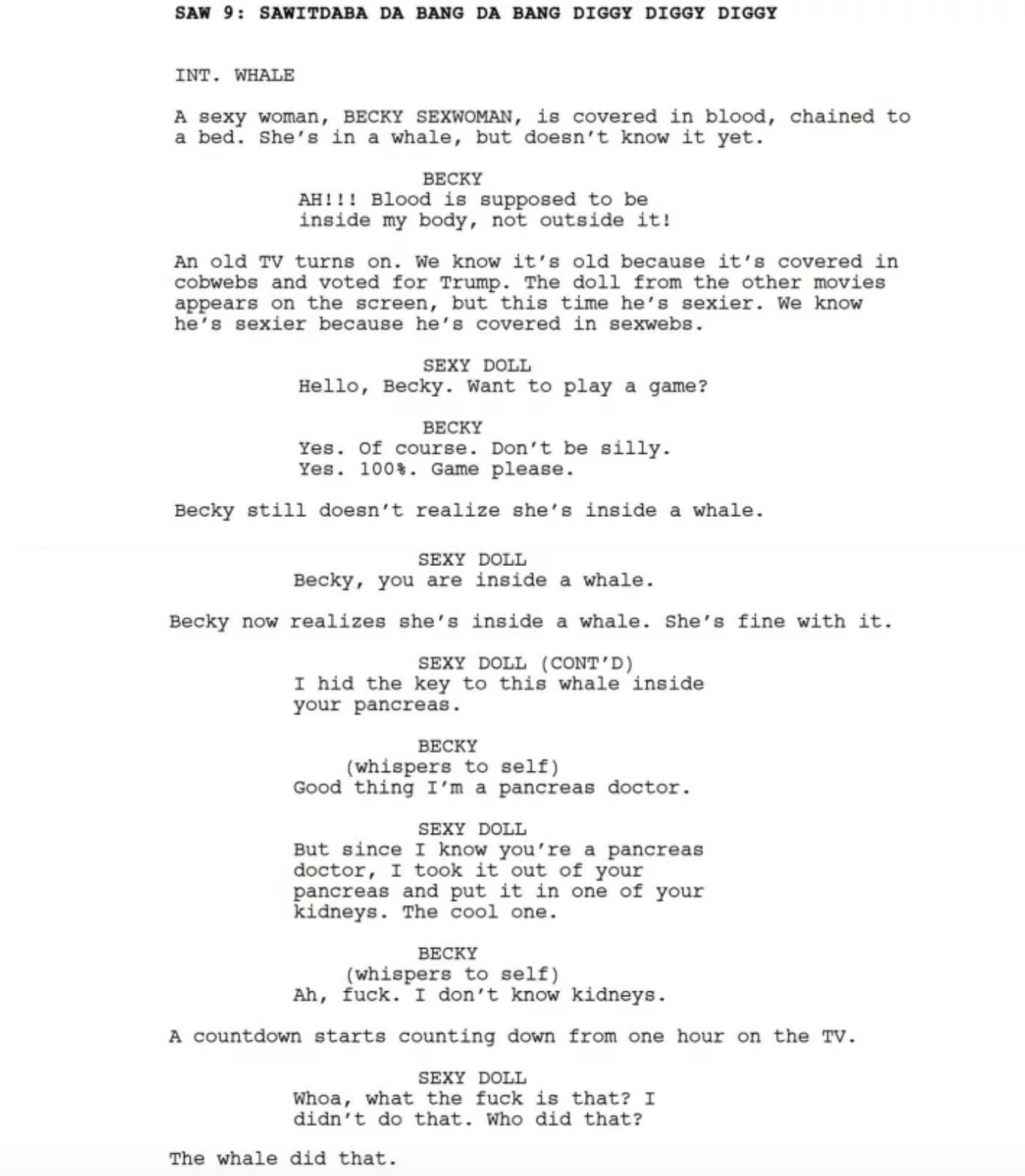 Next he takes aim at the Mission: Impossible franchise, which has already done so many different kinds of stunts, this scene can’t be too far off: 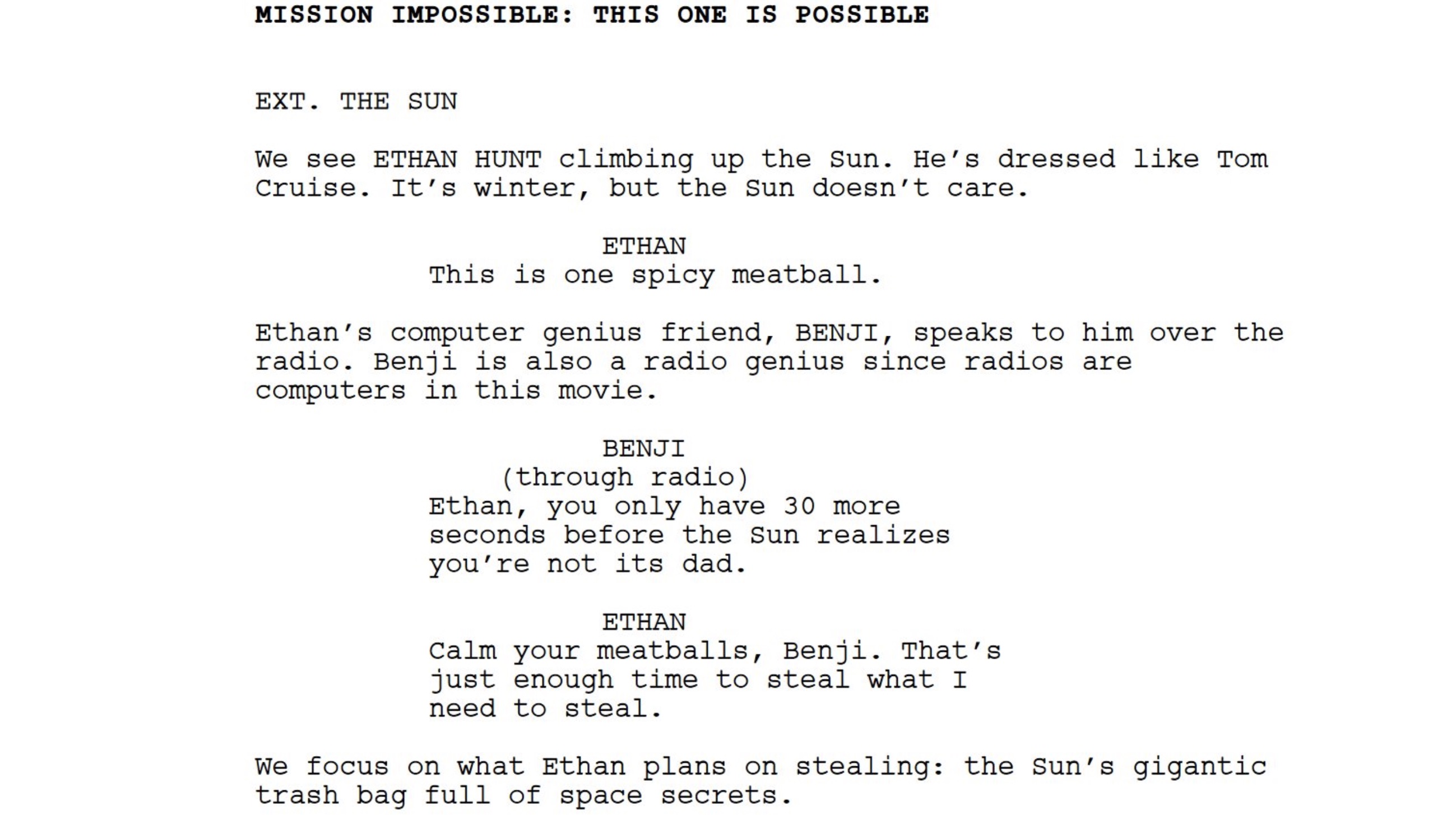 There’s even an informercial for an exploding saw that fabricates lasagnas from thin air. 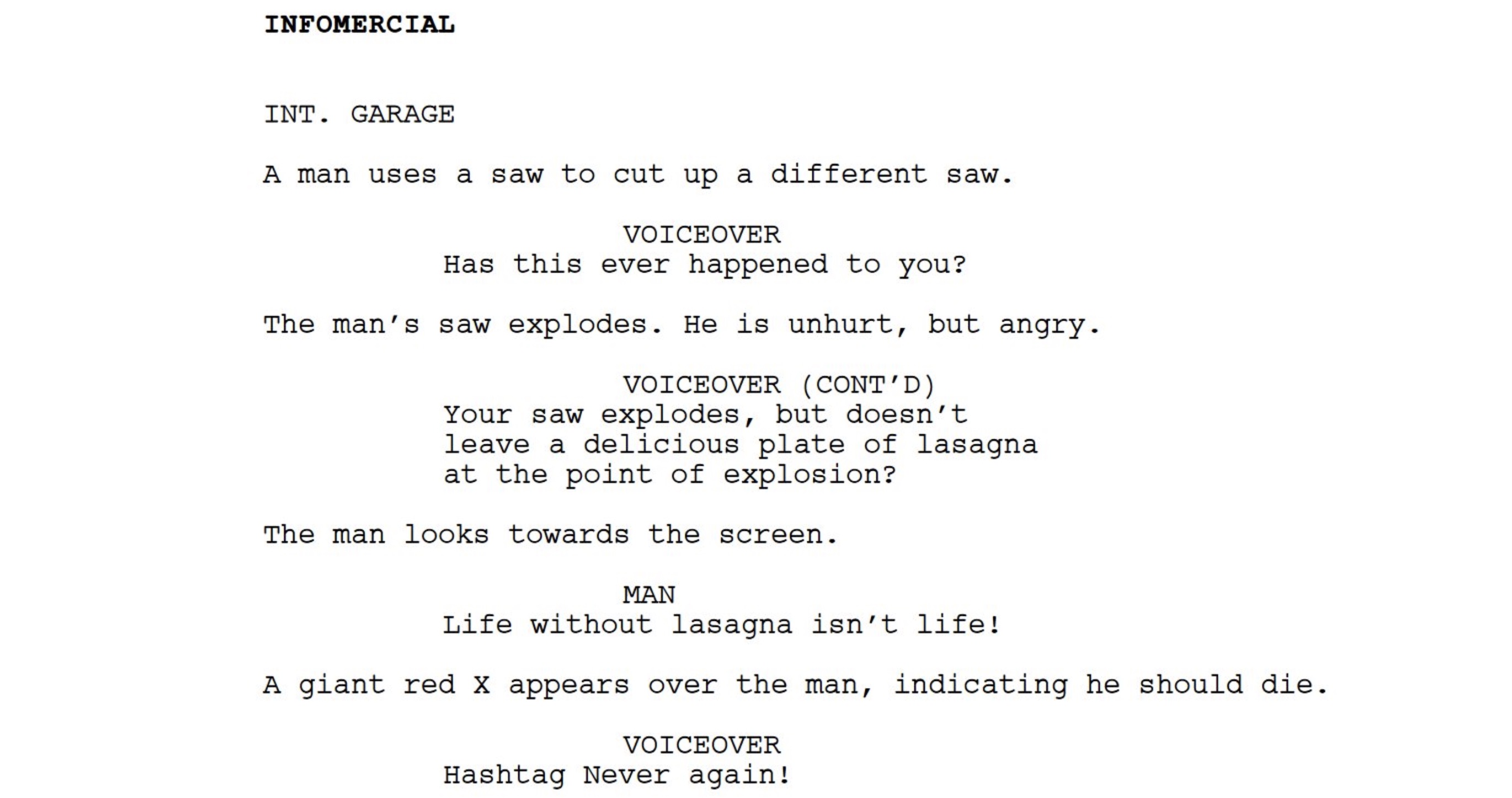 There’s not much of a takeaway for this one, other than “Robots shouldn’t become writers.” The real takeaway is that Keaton Patti is hilarious.

Now, who wants some pasta nachos?