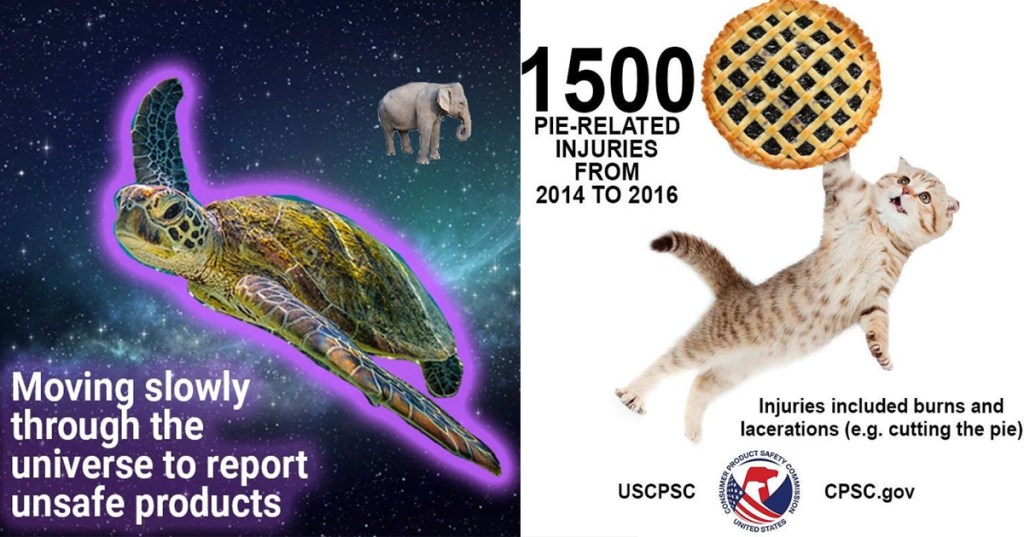 Twitter’s Strangest Account Is Run By The US Government

The government gets a lot of flack these days, so it’s always nice to highlight a federal employee who’s doing great things for a change. And today, that person is Joseph Galbo, the social media specialist who runs the Twitter account for the U.S. Consumer Product Safety Commission. The commission’s purpose is “protecting consumers and families from products that pose a fire, electrical, chemical, or mechanical hazard,” which sounds very important and very dull. That’s why Galbo’s surreal, meme-like images are so unexpected, and popular.

This is the most popular Twitter post from the USCPSC, in response to the Tide Pod Challenge from a couple months ago:

From Safety Whale and all of us here at CPSC, Happy #313Day, Detroit. pic.twitter.com/5QDfBzRBGz

(Pretty sure Detroit is located on a freshwater lake, which isn’t very safe for our new friend Safety Whale, but we’ll give them a pass this time.)

Galbo realizes that many of his images appear to be rushed and amateurish, and that’s the point. “A lot of people assume that it’s an intern or someone’s dad trying to do memes,” he told Chron.com “Very rarely do people think it’s someone who knows what they are doing. That’s part of the charm.”

The idea is, with so much online content, you have to do find a way to stand out. And something must be working, because the commission’s Twitter following has grown 37% since Galbo took over in 2016.

Below, you can check out a sampling of Galbo’s work. Not only will you have a chuckle, you might even learn some useful safety tips.

After trying to figure out if we could provide a realistic estimate of math-related injuries, we settled on edible pie. Learn more about the National Electronic Injury Surveillance System: https://t.co/9V44pxD8vP #PiDay #PieDay pic.twitter.com/DkvipCmt63

2. Cleaning products have identity issues, too.

Everybody. Poison Prevention Week is back again. Our new blog has everything you need to #preventpoison in your home https://t.co/w9ybt7po30 #MondayMotivation pic.twitter.com/tIcLJqclUN

3. The next thing in baby furniture: zero gravity.

Best way to lay your baby down to sleep on this #WorldSleepDay On their back. Every time. #SafeToSleep pic.twitter.com/gp7sdkcij7

5. I think we know why the electric bill is so high.

Keep your space heater at least 3ft away from flammable objects #WednesdayWisdom pic.twitter.com/3HpSCvWDOD

7. What do sleeping babies have to do with unicorns? Nothing…until now.

Still trying to get those green alligators and long-neck geese on board with the campaign. #StPatricksDay #bareisbest #safetosleep pic.twitter.com/upExjgaocU

8.  The USCPSC even has a mascot, Barks McWoofins

New MCWOOFINS – “IF YOU’RE AT A POOL PARTY AND THERE ISN’T A FOUR-SIDED FENCE, FIND THE HOST AND ASK THEM WHAT IN THE NAME OF POSEIDON’S GHOST THEY’RE WAITING FOR” #NCPW2018 #BarksMcWoofins @poolsafely #WhenINeedAHero pic.twitter.com/ygK5aC7xBC

Dogs may have psychic abilities. They may not. What’s important is that cordless window coverings are available in stores #GoCordless #MondayMotivation https://t.co/UvPl0zEAgs pic.twitter.com/FazTNDaxPm

10. Knowledge might be power, but he prefers a fireball spell.

h/t: Splinter and The Houston Chronicle