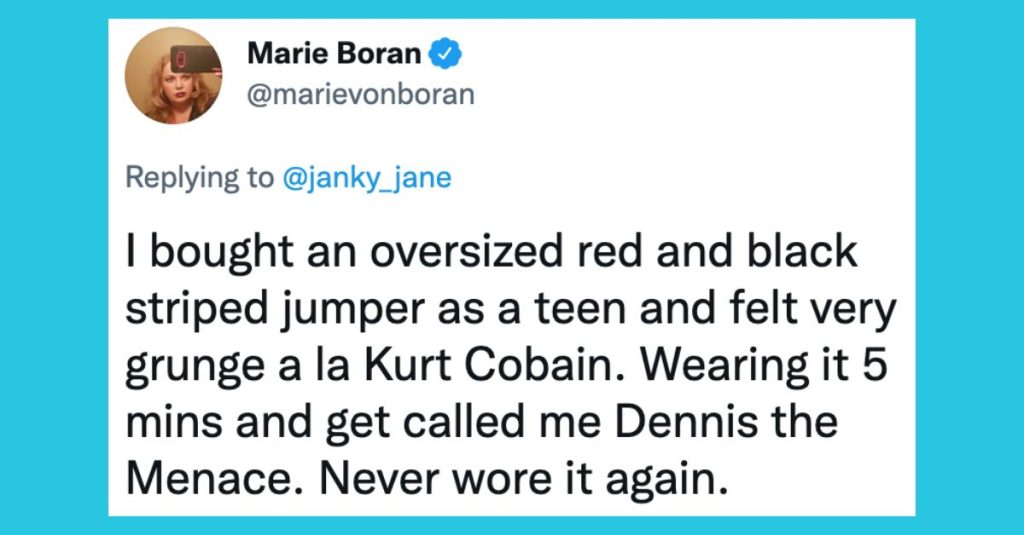 Have you ever been called out by friends or total strangers about something you were wearing?

But hey…it happens to the best of us…

Take a look at these folks who shared some roasts from the dreaded Fashion Police.

I was wearing my super-fashionable short trench coat. My friend took one look at me wearing the jacket and said, “Where are we off to now, Columbo?”

I once ordered a taxi in Belfast for a night out. The driver pulls up to my house and just says “yer not going out like that. Go back in and change, I’ll turn off the metre.” I swear I was wearing normal jeans and a normal jacket.

I’m in the U.S. but at university there was an Irish student in acting classes with me. I bought a purple suit for the opening of a play I directed. He took one look at me and said, “Who bleached Prince?”

I had a soft, furry pink jacket that I loved. It was like fake fur, but clearly fake.
Friend said to me, feigning genuine disgust, “Do you know how many muppets died to make that jacket?”

Walking into the local and one of the lads wearing skinny jeans was asked by an old fella smoking “did those trousers grow out of your arse or did they paint them on?”

8. Back into the fields you go.

Had an admin wear one of these two work. Lad walks up and says, “Mary dear we’re all out of coffee, would you mind harvesting some more?” pic.twitter.com/VNucVEMw9D

Back in Dublin after travelling S. America, decked out in a visually assaulting combo of zebra print leggings and tiger pattern knee high boots. Queuing into well known Dublin nightclub that evening was asked “Did you get let out of Dublin zoo or make a break for it yourself?”

I bought an oversized red and black striped jumper as a teen and felt very grunge a la Kurt Cobain. Wearing it 5 mins and get called me Dennis the Menace. Never wore it again.

You had it coming.

Came back home with a jacket I bought in Manchester thinking I was cool…first pub I walk into…. “If it isn’t Sgt.Pepper” pic.twitter.com/sqkwQKzBSg

Have you ever been roasted by the fashion police?

If so, tell us your stories in the comments!