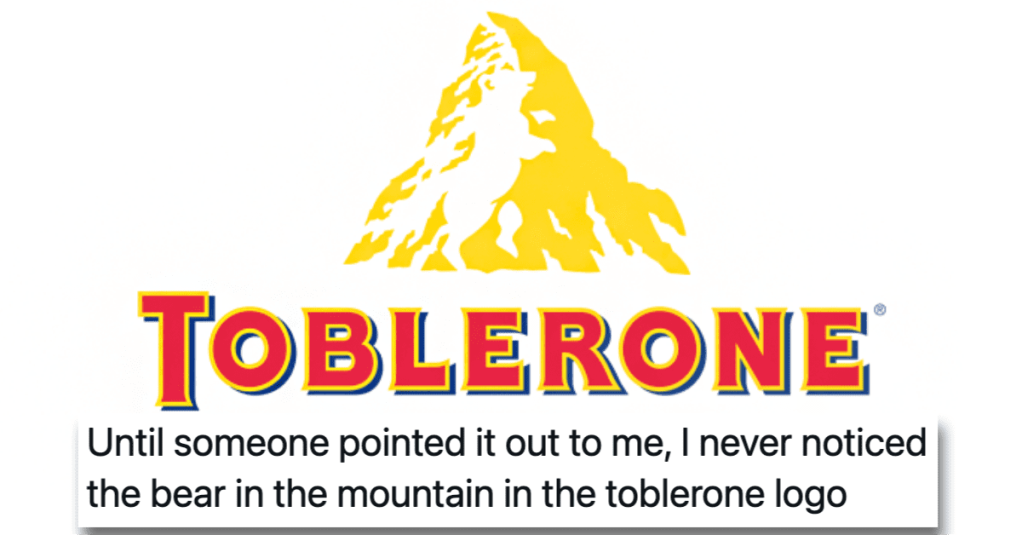 I gotta say, I felt kind of stupid after I looked at these tweets about hidden things in famous logos, because I’ve never noticed ANY OF THEM before…not even one…

What does that say about me? I’m not sure and I don’t even want to go there right now…

But enough about me. Take a look at what people had to say about famous logos where there is definitely more than meets the eye.

My wife just confessed that for her entire childhood she thought Colonel Sanders’ bow tie was his whole body and now I can’t stop seeing a tiny stick body every time I look at him. pic.twitter.com/qVad6t93SA

Now you can’t unsee them.

I asked my husband “What gorilla?” & he just looked at me. I never noticed the animals before. pic.twitter.com/Uo14qGTYQT

When my youngest was 4 or 5 he kept begging for “high-five guys” from the grocery store. He got VERY angry with us bc we had no idea what he meant. We finally figured out he wanted Annie’s cheddar bunnies. He was looking them sideways and thought they were fat little men. pic.twitter.com/s03Woz2HXn

Until someone pointed it out to me, I never noticed the bear in the mountain in the toblerone logo pic.twitter.com/eE6jQVXAUl

Do you see that?

When my daughter was little, she asked why they have a dead clown on the box: pic.twitter.com/Mktgdxm7Pu

As a child I went into a store and asked for a bottle of ‘Zup’ pic.twitter.com/zG3CB9Z53q

And she’s not exactly wrong…

When my daughter was 2 she would yell out “strawberry “ every time she saw the Canadian Tire logo. pic.twitter.com/FfiOqybpmF

LOL on this one.

I used to work at agency that rec’d federal funds. This sign was a fixture. One day a coworker asked why I was staring at it so intently. Me: “I can’t figure out why this guy is standing like this wearing Yosemite Sam boots?” She started laughing. pic.twitter.com/0nApMG3b4K

And it was also pretty funny.

I lived in Fort Worth for about 2 years before realizing that the logo of our zoo is an elephant, not a hula dancing octopus pic.twitter.com/QnHtSOj3bG

My entire childhood I thought the MLB logo was a floating duck and I didn’t understand it. I was not a smart kid. pic.twitter.com/0DESh8vk70

Take a look for yourself.

How about the arrow in the E in FedEx. I never saw it until my son pointed it out… and now it’s all I see. pic.twitter.com/fepI10eHuP

Have you ever realized later in life that a famous logo wasn’t what you thought it was?

If so, tell us all about it in the comments.