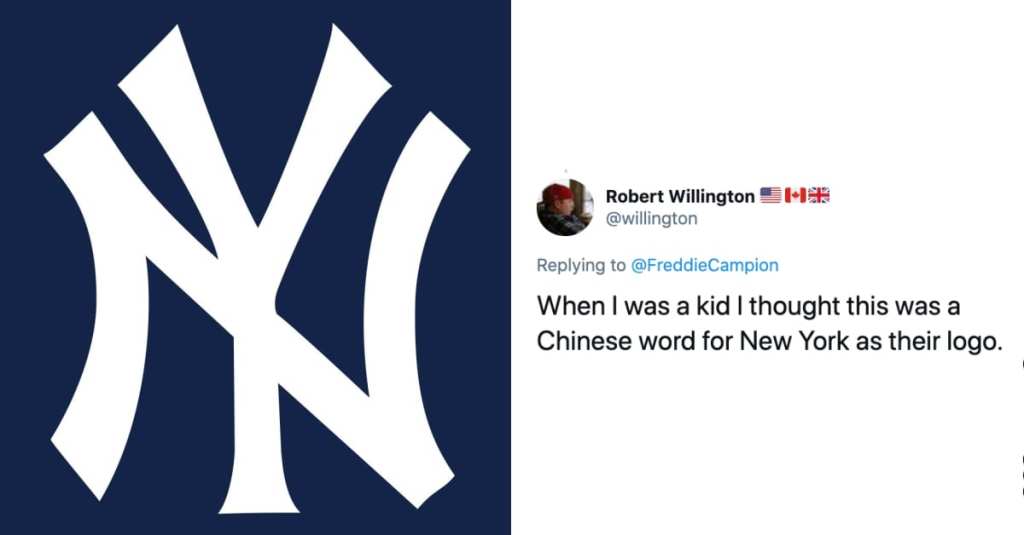 Do you know what I’m talking about?

My mind was BLOWN. I was completely flabbergasted.

And that’s why I enjoy these kinds of posts so much!

Let’s see what people had to say about what’s hidden (or not hidden) in famous logos.

Sounds like you were a little bit behind the times…

? I couldn’t understand why people were wearing black and yellow cartoon teeth t shirts. Then I finally found out it was the new Batman logo (in my defence the yellow “teeth” stand out)? pic.twitter.com/rs34YpWkks

What am I looking at here?

In a similar vein, until just recently I 100% believed that the Hawaiian Punch mascot had antlers for some reason instead of a straw hat. pic.twitter.com/7L6v0OXvib

Okay, we’ll give you a pass on this one.

When I was a kid I thought this was a Chinese word for New York as their logo. pic.twitter.com/KS72zc5lbO

Just wait until you realize that Cap’t Crunch’s eyebrows are on his hat. pic.twitter.com/t8sadBPVW9

If you say so…

Until about my mid 30’s I thought the front feet were his jaws and he had a little white eye. pic.twitter.com/wj0MbVgliA

It was an honest mistake.

That’s what the company is called?

I was like 25 when I realized this was D. When I was a kid, I thought it was a weird treble clef cause all the movies were musical ?? pic.twitter.com/aQjqeiLwY4

You were just a kid!

When I was a kid I thought the Montreal Expos logo was the letters “ELB” instead of a script letter M. I also thought “ELB” was was a word in French pic.twitter.com/HonzSTY5pl

9. I never saw that either…

My friend never saw the 1 in the old F1 logo and just thought the streaks were supposed to be the one pic.twitter.com/1dFLCAAAZ2

I lived in DC a long time before I realized the Capital Dome is at the bottom of the eagle. pic.twitter.com/1wWIItM7WS

I thought the Browning logo (seen on stickers without the name) must have been the symbol for a heavy metal band. I thought it was a pregnant devil woman. Mother of Satan? Hell Child? ? I finally took a picture and asked what it meant. Didn’t see the deer until someone told me. pic.twitter.com/lrQvBjPRDc

My 9 year old daughter recently asked, “I have been wondering…how does that guy drink a soda without any arms?” (A local shop in Helena, MT) ?? omigosh, we laugh every time we pass it. #FinAndClara pic.twitter.com/GTWvqNetn7

Have you ever had any experiences like this with famous logos?

If so, tell us your stories in the comments.