If you have kids, then you are already well aware that plenty of people you don’t know and who have no personal investment in your child’s life or well-being will one day line up to offer you unwanted and unsolicited advice.

That’s what happened to Jessica and Steve Rold when they were picking up their two-year-old son and infant daughter from daycare. The staff apparently took issue with the fact that their little girl wore “boyish” clothes (probably hand-me-downs – money saving ftw!) and suggested that – for the benefit of the other children, you understand – they dress their daughter “more girly.” Otherwise (gasp!) they may not realize right off the bat that the infant has female parts.

Since they have a good sense of humor and didn’t just flip the person who brought this up the bird (like I might have), Jessica sent her daughter to daycare dolled up like this: 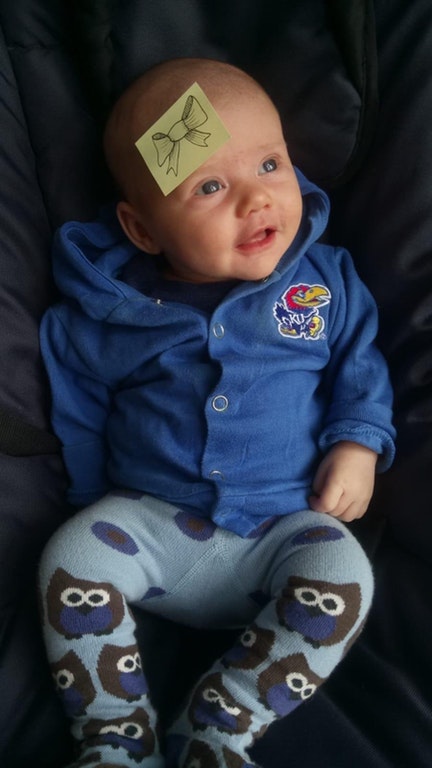 Steve got in on the fun, posting the story and the photograph on r/daddit, and getting back plenty of commiseration in the form of other dads telling stories about gender-obsessed people commenting on their own children.

Like this guy, who was quick to point out that the blue/pink gender assignment is total crap.

And a bunch of posts that prove that while some adults are super concerned about what your child is wearing, kids don’t give a crap – and you shouldn’t, either.

Someone eventually pointed out that we were all missing the point, which is that the drawing of the bow is like, very good!

Husband Steve was quick to point out that his wife is a professional artist and we shouldn’t let it go to her head.

Too late, because this whole situation deserves exactly how much attention it’s gotten – a lot.