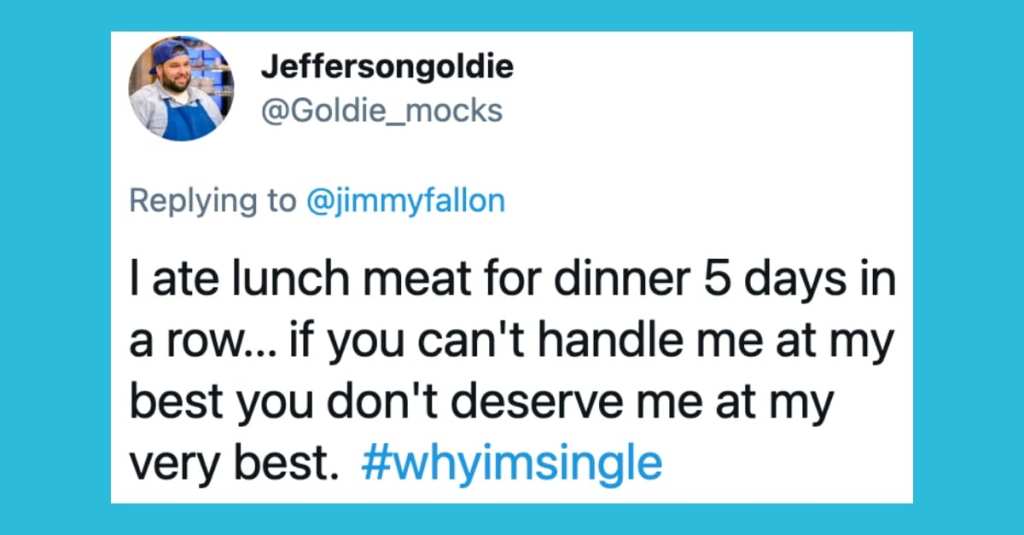 I’ve been single for quite a while now, and that’s okay.

I know I have my quirks and I also know that it’s gonna take a very special someone for me to give up my independence.

And knowing is half the battle, right?

These brave souls were nice enough to get real about why they’re single. Let’s dive in.

1. That wasn’t a compliment.

In case you didn’t know.

My last girlfriend said I chewed like a horse eating toffee. #WhyImSingle

If you say so…

I ate lunch meat for dinner 5 days in a row… if you can’t handle me at my best you don’t deserve me at my very best. #whyimsingle

Last time I checked, Jennifer Aniston had not returned my calls… #WhyImSingle

Time to move on.

I was on a lunch break with one of my colleagues who I had a crush on. In the middle of our conversation he raised his hand and I assumed he wanted a high five. Turned out he wanted to wave to his friend, who just walked into the room. #WhyImSingle

That was a test.

Girl I was with, I felt like lied to me a lot. I was cooking supper and made pork chops – I didn’t put a single sprinkle of seasoning on them and cooked them on a George foreman. She said it was the best pork chops she had ever had. I immediately told her to leave. #WhyImSingle

6. That could be a problem.

Because I take my superhero action figures to the theater for MCU/DC movies so they can watch themselves on the big screen.#WhyImSingle

My ex and I did laundry together and we broke up because he could not admit that my way of folding towels and sheets was the correct way. #WhyImSingle

Not by a longshot.

My date pronounced the L in salmon, and I said out loud, “well, you’re not the one.” #WhyImSingle

And here’s one more example.

At my youngest sister’s wedding, the photographer asked my dad if she was the last of his daughters to get married. He said yes. Father knows best. #WhyImSingle

And sleep in a cave?

I don’t want children and basically want to date a female version of myself. I also choose to sleep in basically a windowed closet because I like the cave like environment. #WhyImSingle

I decided after my first mega fail of a “relationship ” it’s better to stay single and be yourself. Happiness should not come from a relationship, but from yourself, happy that you are with this person, and they’re happy to be with you. Focus on you first. #whyimsingle

Because people are crazy! #WhyImSingle

Talk to us in the comments and spill your guts!