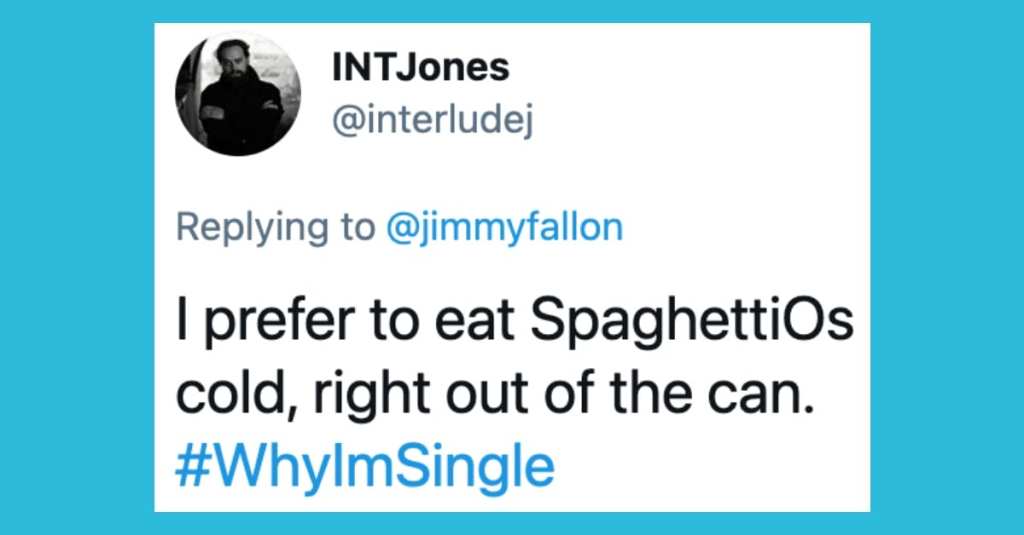 Hey, let’s face it. Some folks are just better off by themselves.

Or that’s the only realistic option…

But knowing is half the battle and these people DEFINITELY know why they’re spending their nights alone.

Take a look at why they believe they’re single.

You might want to get rid of that thing.

Apparently, having a weighted blanket on the bed “kills the mood” ? #WhyImSingle

#WhyImSingle My last serious boyfriend told me I will never love him or anyone as much as I love my dogs. He was right and he is gone ✌️ He also told me I cant “foster anymore dogs” The next day I went and picked up a 100LB German Shepherd to foster. True Story.

To each their own, right?

I prefer to eat SpaghettiOs cold, right out of the can. #WhyImSingle

Oh, well, there goes another one…

My Tinder opener is “Choose between a compliment or a roast” and someone chose both. So I told her she reminded me of Sid from Ice Age, and she promptly unmatched.

At least think about it…

I have a lot of Captain America themed items (from phonecases, to power banks, to earphones, keychains, household items, you name it). Apparently it’s immature and unreal to crush on a fictional character ? #WhyImSingle

7. You know what you’re doing.

I foster and rescue the loves of my life. My ex told me if I brought one more dog home, he was gone. I brought two for insurance purposes.
That’s #WhyImSingle pic.twitter.com/ks0HUl6nAu

At least you have hair!

Because I hire Dr. Seuss to do my hair some mornings. pic.twitter.com/M2pgcq8eDB

9. I could see how this would be creepy.

I have various pillows with actors’ faces on them…my fav two are of Danny DeVito #whyimsingle pic.twitter.com/FowNTRpIO5

This is real life!

One time I went to my gf’s daughter’s bday party at Chuck E. Cheese. She sneezed on my pizza so I stole half her tickets and got a super soaker #WhyImSingle

Hide those things next time!

My friend used to put Post-it Notes on his mirror for daily inspiration. His date came over one night and saw one that said, “Just be yourself, Kevin!” #WhyImSingle

In the comments, tell us why you’re single.