If you were a pharaoh of ancient Egypt, you had it pretty good. Not only did you enjoy an unfathomable level of power and wealth, your subjects went as far as worshipping you as one of their gods–during a pharaoh’s life, they were considered the incarnation of the god Horus, and after their death they became the incarnation of the god Osiris. When a person attains that level of influence in the world, it’s understandable why their own servants would have been happy to be killed so they could be buried with them.

To paraphrase Mel Brooks’ History of the World Part I, “It’s good to be the pharaoh.”

But for a brief moment in 1974, the mummy of Pharaoh Ramesses II was just like any other Egyptian leaving the country: he needed a passport. 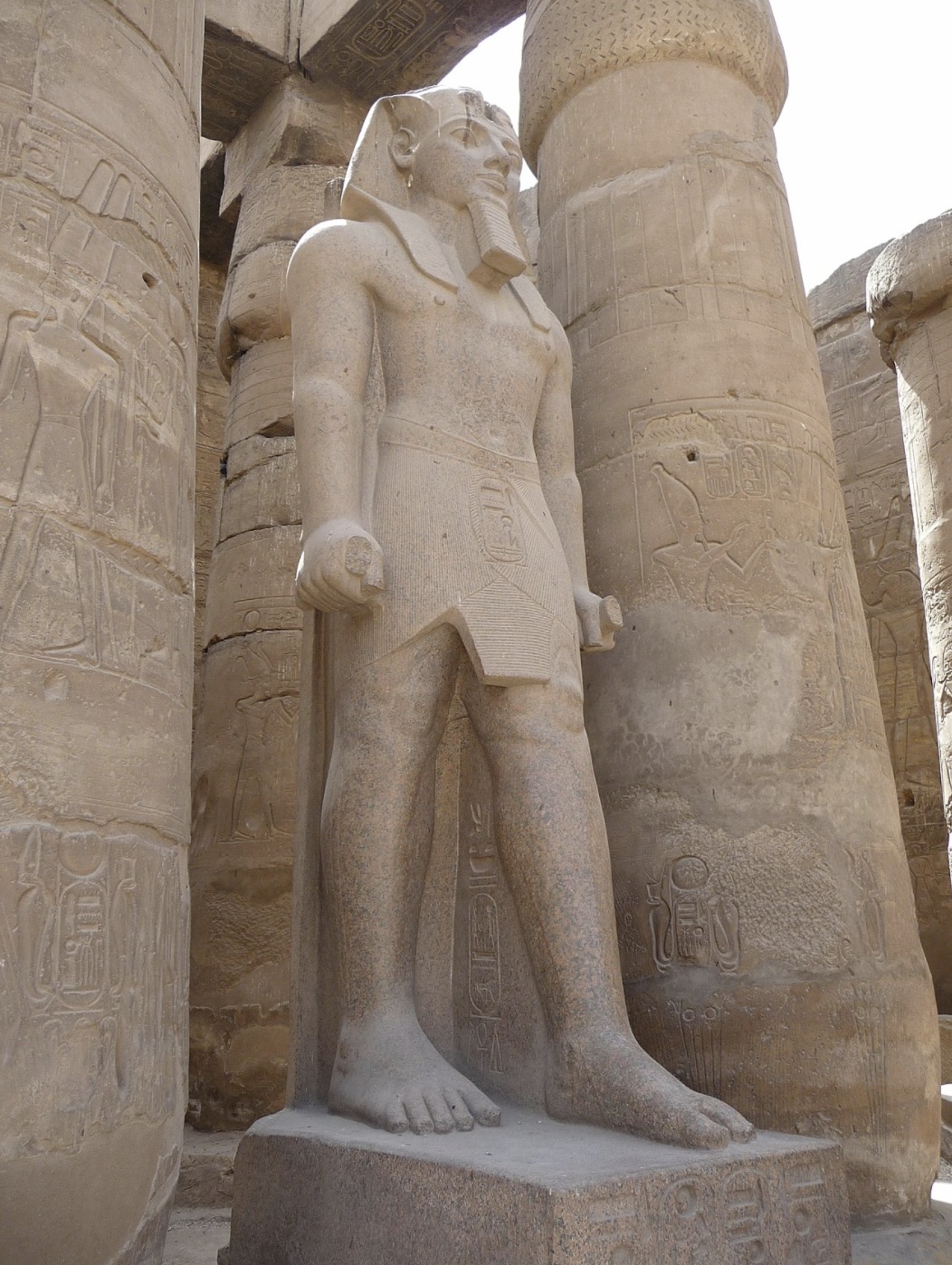 Today, Ramesses II is considered one of the most successful pharaohs of ancient Egypt. Born in 1303 B.C., he is believed to have taken the throne as a teenager and ruled into his 90’s. His reign lasted 1279 B.C. to 1213 B.C., or 67 years–which was the longest  of any pharaoh in history.

He was a strong military leader, overseeing a standing army of about 100,000 soldiers–enormous for the time period–and reconquering territory that prior pharaohs had lost. When he wasn’t in battle, Ramesses II was focused on building more temples than any other pharaoh in history. His massive Abu Simbel temples, carved into a mountainside, were a monument to both himself and his queen Nefertari and are still one of the most impressive sites in Egypt today.

When he died, Ramesses II was first buried in a tomb in the Valley of the Kings. But grave robbery was a constant problem in ancient Egypt, especially for pharaohs buried in rooms full of gold, so Ramesses II’s mummy was repeatedly relocated. Eventually, the location of his body was lost to history, until it was finally rediscovered in 1881, in the tomb of a priest who lived about 400 years after Ramesses’s death.

In 1881, Ramesses II’s body was in pretty good shape for someone who had been dead for over 3,000 years. Thanks to ancient Egyptian burial techniques, his skin, hair, and facial features were still mostly intact. He even seemed to have a resemblance to the many statues from his reign. In 1885, Ramesses II was relocated to the Egyptian Museum in Cairo.

But by 1974, after decades of storage in the comparatively humid museum, the mummy began to break down. Researchers discovered that the body had begun decomposing and was infested with bacteria.

Ramesses II needed to be flown out of the country for restoration. And to do that, he would need a passport. 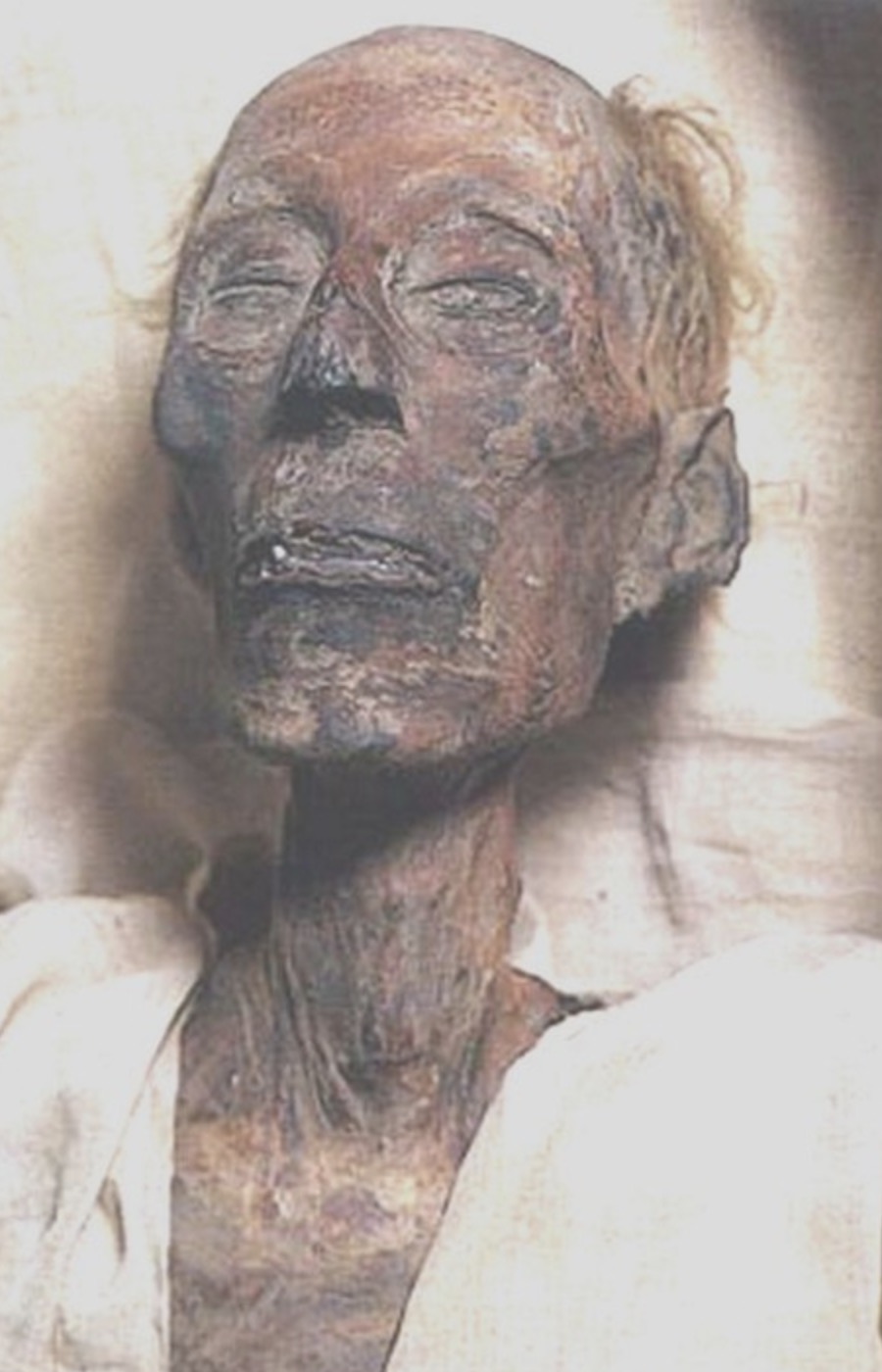 There are two reasons why a guy who’d been dead for over 3 millennia needed a passport. First, according to Egyptian law, anyone who leaves the country either living or dead needs paperwork–even if a dead person lived well before passports or modern nation-states existed. And second, a passport gave Ramesses II’s remains legal protection. Egyptian antiquities have been looted for centuries, with many artifacts still on display in other countries to this day. Without a passport, it was feared that Ramesses II’s remains might not make it home.

And so, Ramesses II became the first and only pharaoh to receive his own passport. The passport listed his birth year without a day or month; it featured a mugshot photo of his mummy, just like a regular passport; and it listed his occupation as “King (deceased).”

Here’s a mockup of what his passport would have looked like. A photograph of the actual passport hasn’t been released–you never know, someone might try to steal his identity. 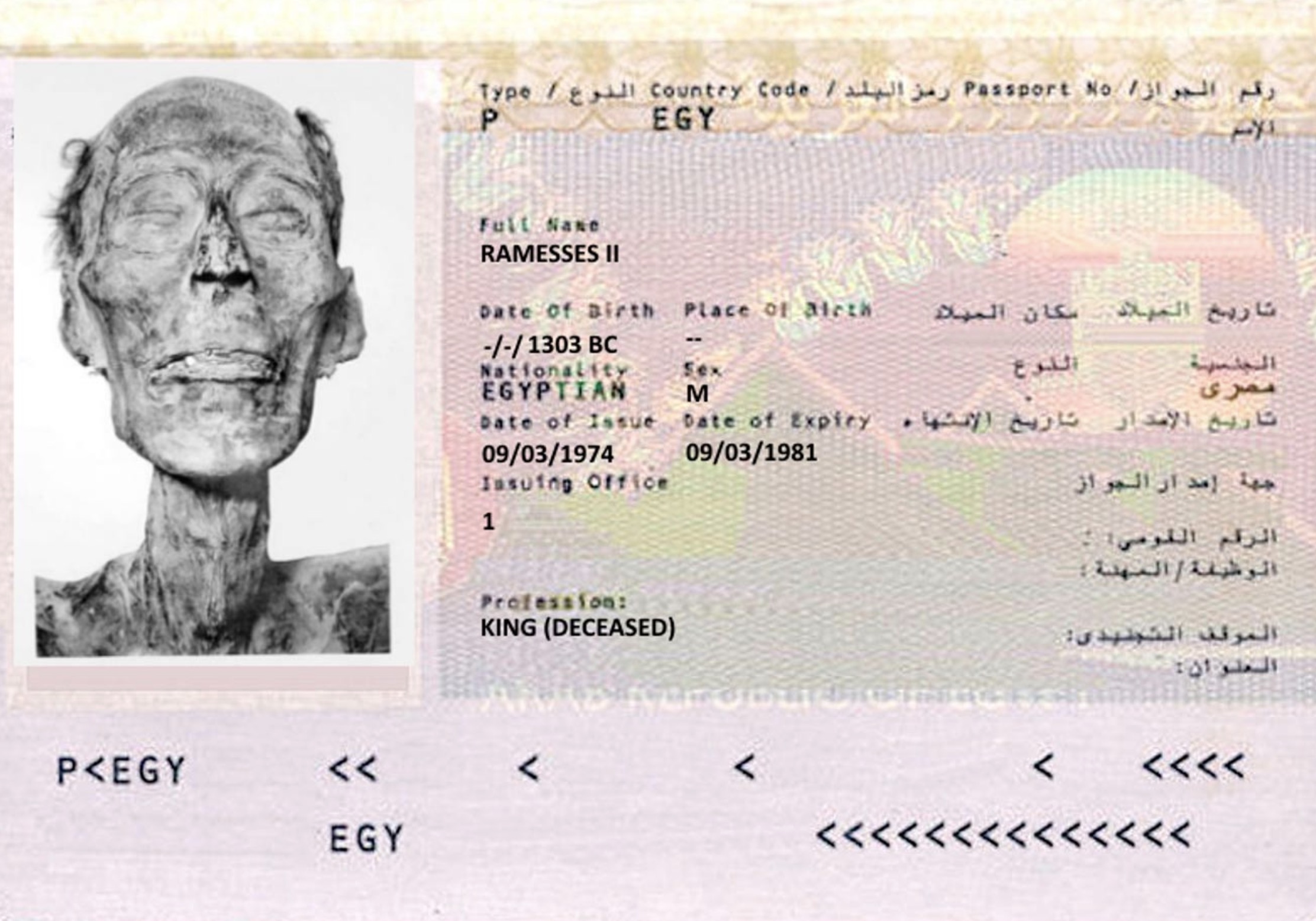 Now with a passport, Ramesses II was flown to Paris–Le Bourget Airport in 1976, where he received full military honors. According to tradition, France welcomes any foreign ruler into the country this way, but Ramesses II was the first and only pharaoh to receive such the honor.

The French team were able to halt the mummy’s decomposition. They also examined the mummy and made several interesting discoveries. Ramesses II stood at over 6 feet tall. His body displayed old battle wounds, broken bones, and evidence of poor circulation. They theorized that his cause of death was either arthritis, which was so severe it caused him to walk with a hunched back later in life, or a tooth abscess that created a large hole in his jaw. And finally, an examination of his still-preserved hair revealed that Ramesses II was likely a natural redhead. 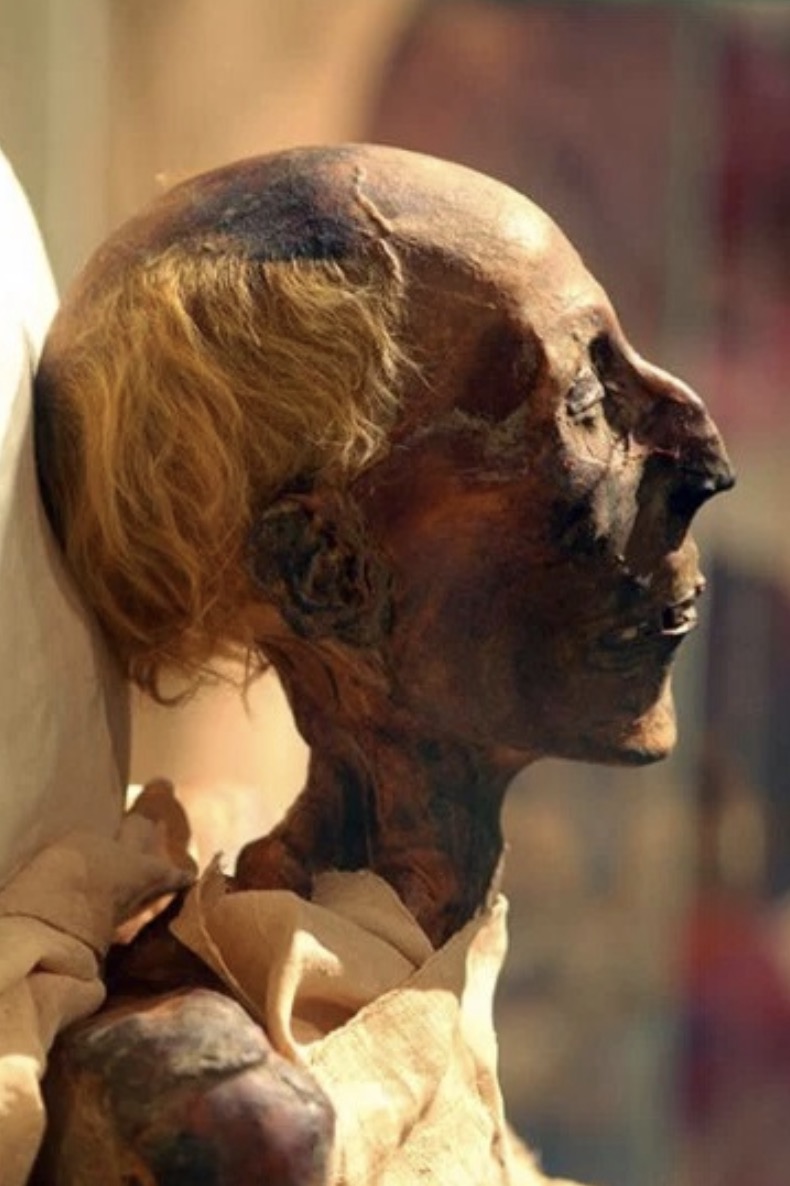 After the procedure, Ramesses II’s body was returned to Egypt, where it’s still on display at the Egyptian Museum of Antiquities. But if Ramesses II ever wants to leave the country again, hopefully he won’t have too much trouble getting his passport renewed.