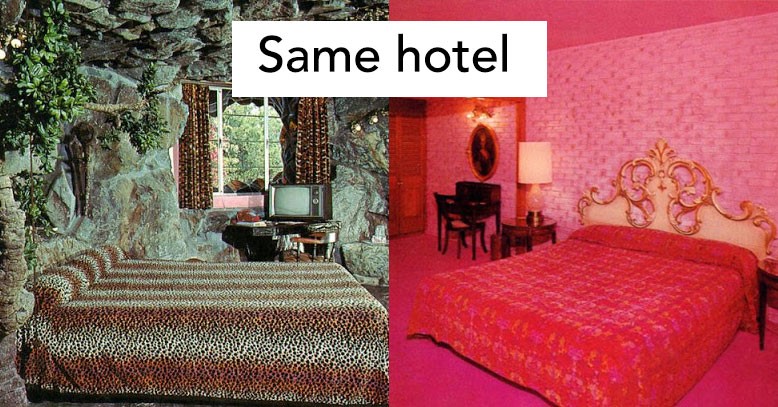 Revisiting The Madonna Inn, An Icon Of Midcentury Tackiness

For the modern hotel industry, these days the name of the game is “conformity.” Your average huge hotel corporation wants all of their hotels to be the same, no matter where they are. That way, whether you’re driving past a Comfort Inn anywhere between Key West, Florida and Sitka, Alaska, you basically know what you’re going to get.

It’s a great business model, but it isn’t much fun. If fun is what you’re looking for, you need to stop at California’s Madonna Inn. 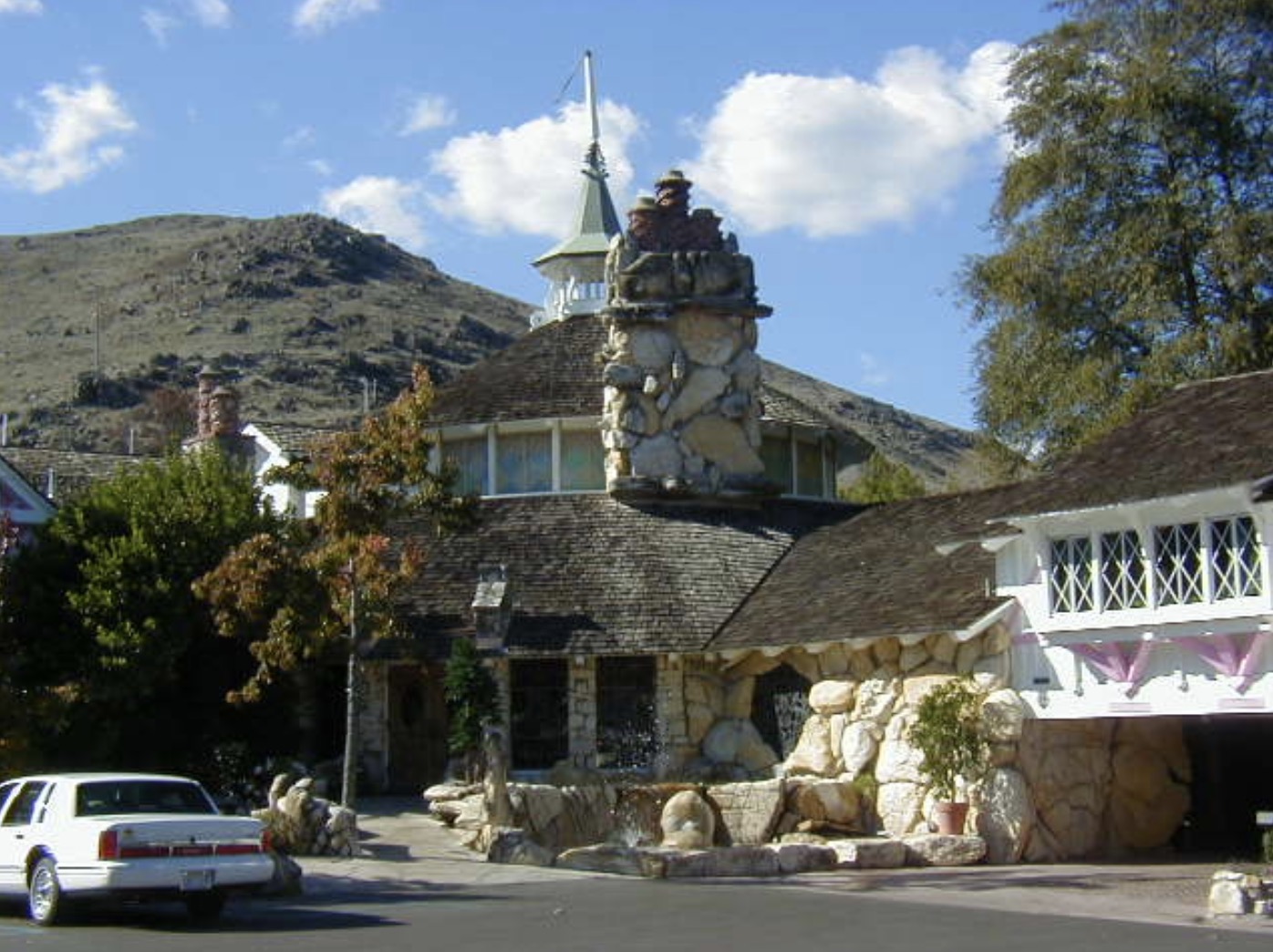 The San Luis Obispo hotel has offered travelers along the 101 freeway a memorable place to spend the night. The exterior of the hotel is decorated in a pseudo Swiss Alps style, with pink roses, Western murals, and hammered copper. But the interior style is best described as “a combination of every other style on the planet.” Each of the motel’s rooms is decorated with a different theme to suit different tastes.

“Anybody can build one room and a thousand like it. It’s more economical. Most places try to give you as little as possible,” founder Alex Madonna told The New York Times in 1982. “I try to give people a decent place to stay where they receive more than they are entitled to for what they’re paying. I want people to come in with a smile and leave with a smile. It’s fun.”

Like Room #137, aka “The Caveman Room,” which looks like something from The Flintstones. How do you stay here and not have fun? 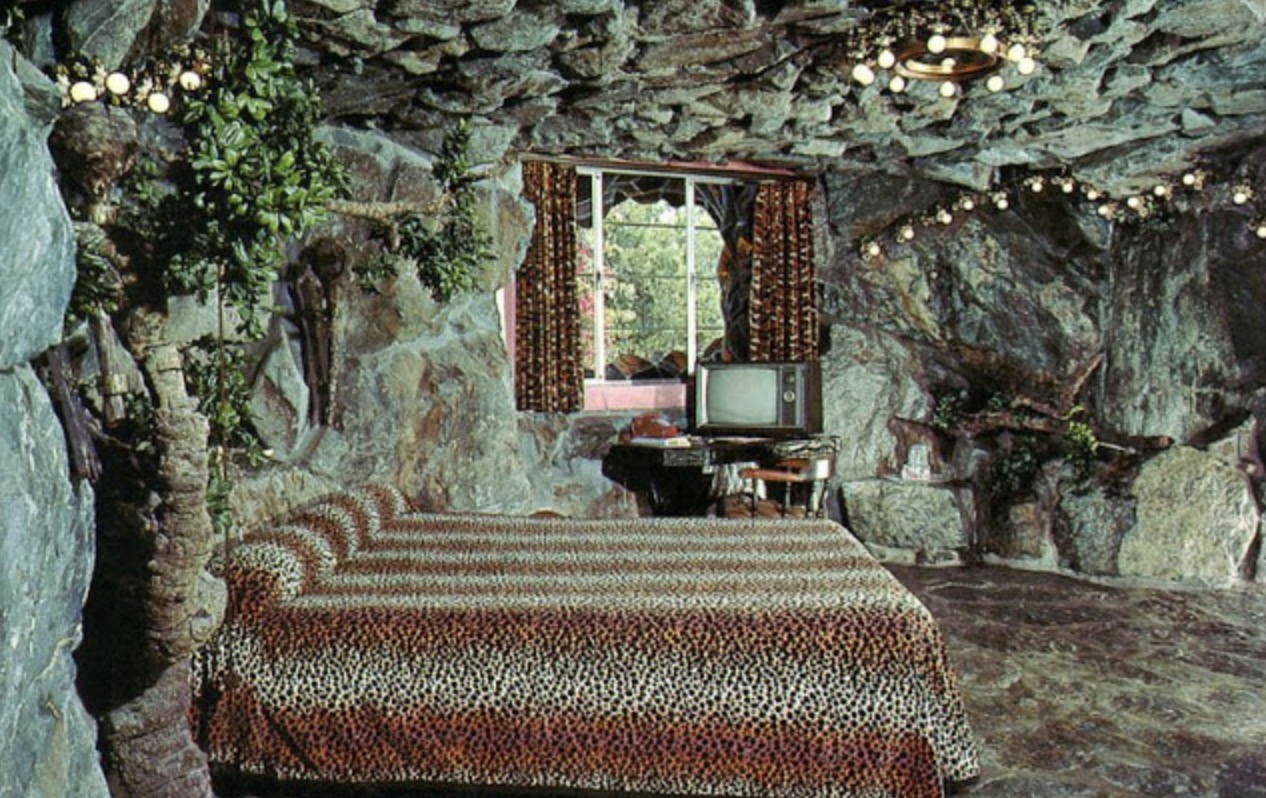 The hotel opened in 1958, with twelve unique rooms. It was so popular that Mr. Madonna expanded to 40 rooms the following year, and added a restaurant, and bakery in 1960. In 1966, the original Madonna Inn was destroyed in a fire, but it was rebuilt and restored by the end of the decade. Today, the hotel has 110 different rooms. Many of the rooms are inspired by California’s landmarks, ecology, and history. Like the “Gold Rush” dining room, if the Gold Rush was way more pink. 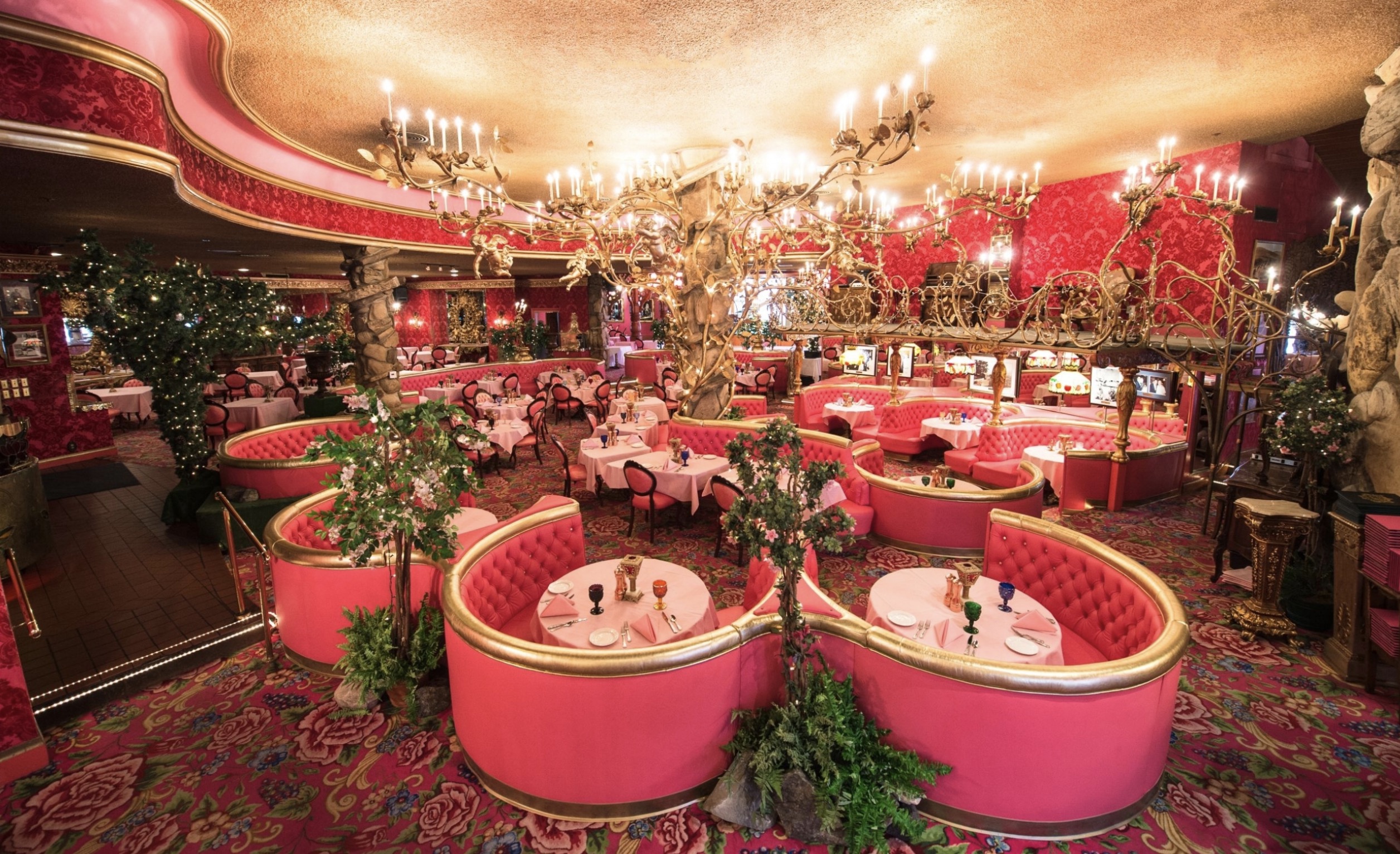 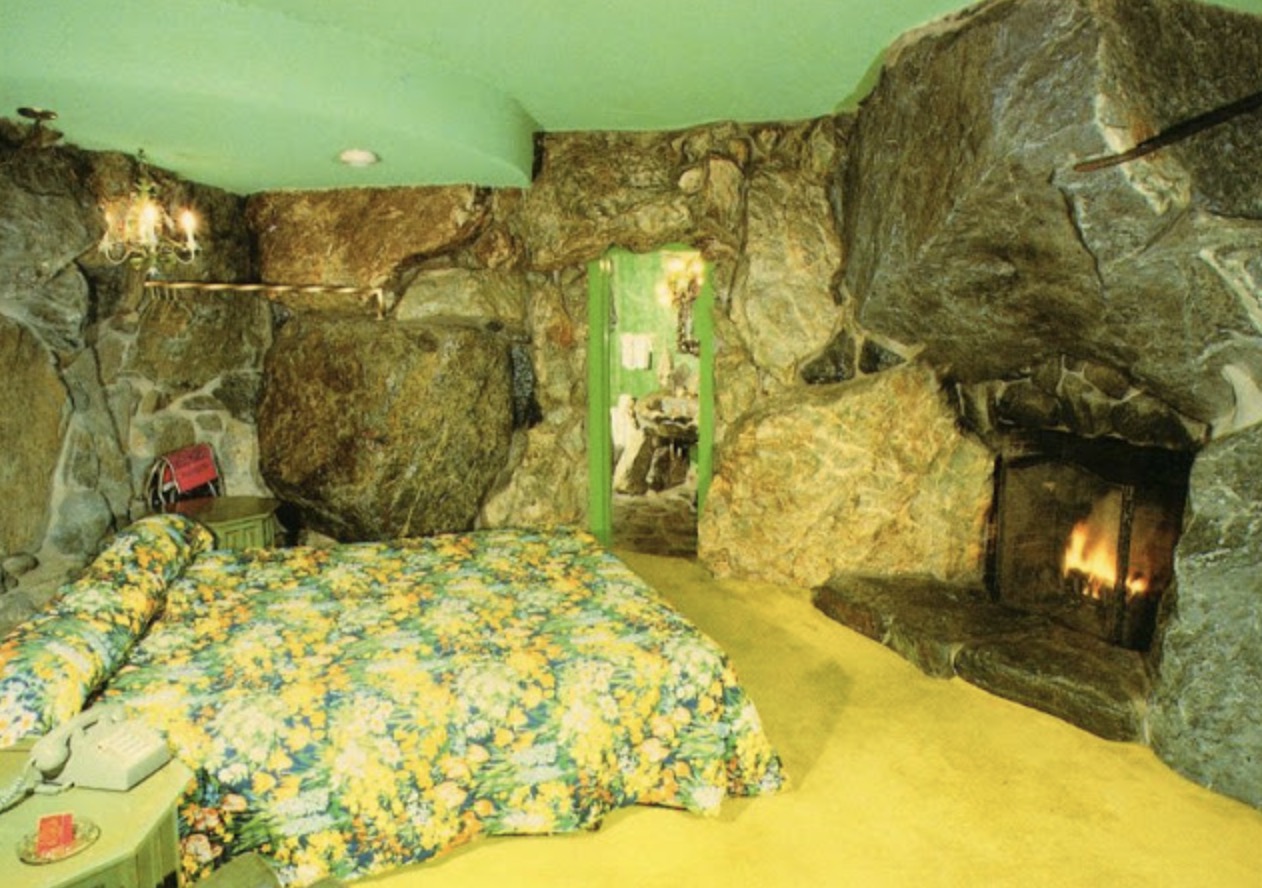 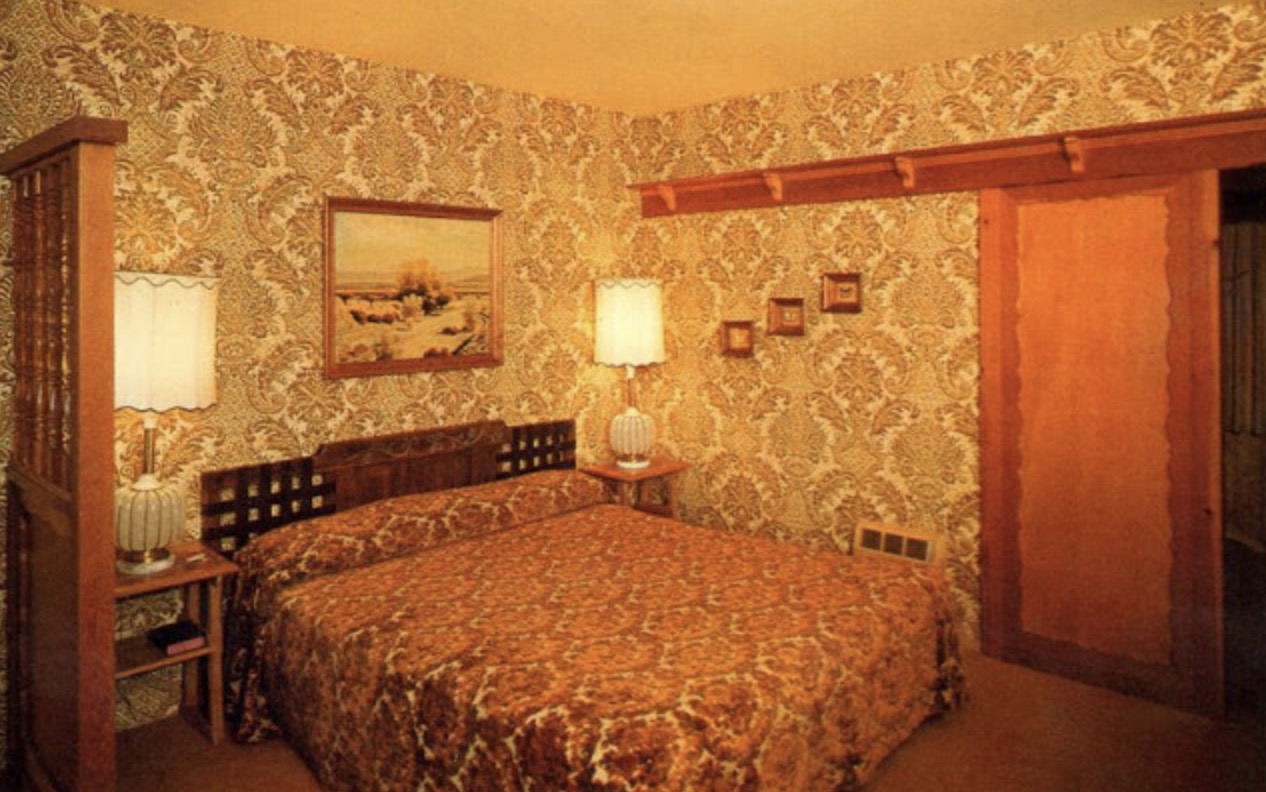 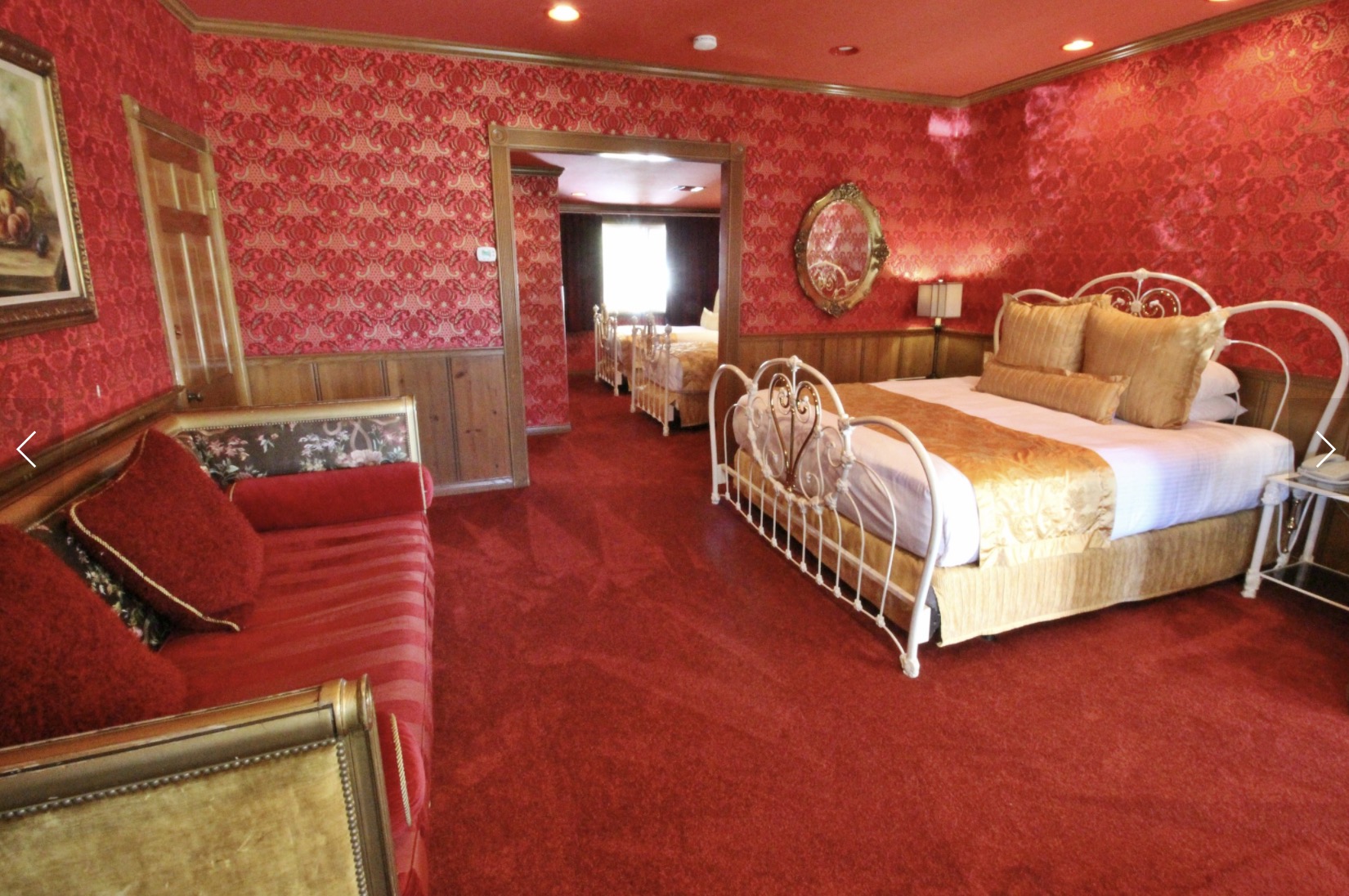 Some rooms are inspired by other countries, like room #216, “Matterhorn.” 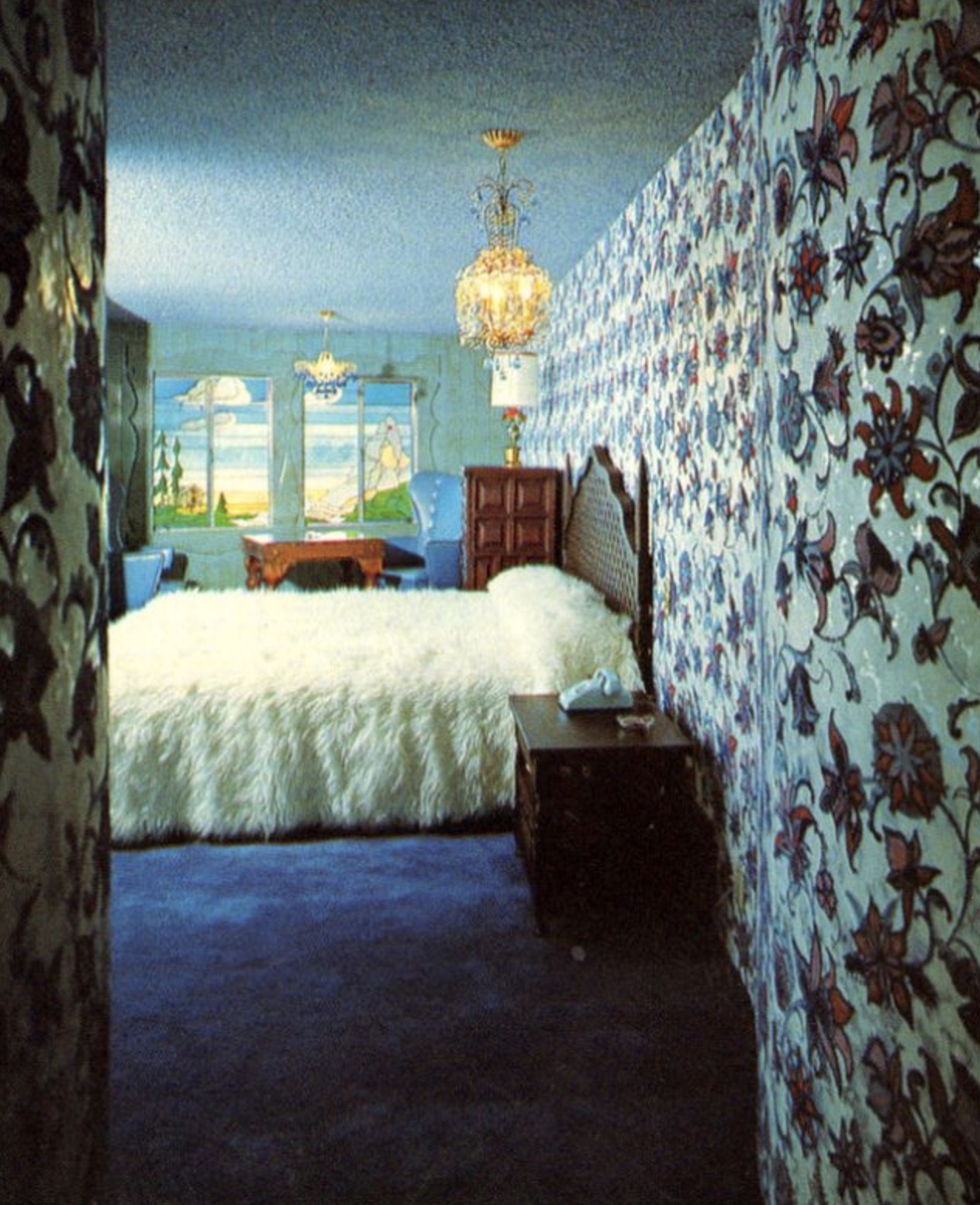 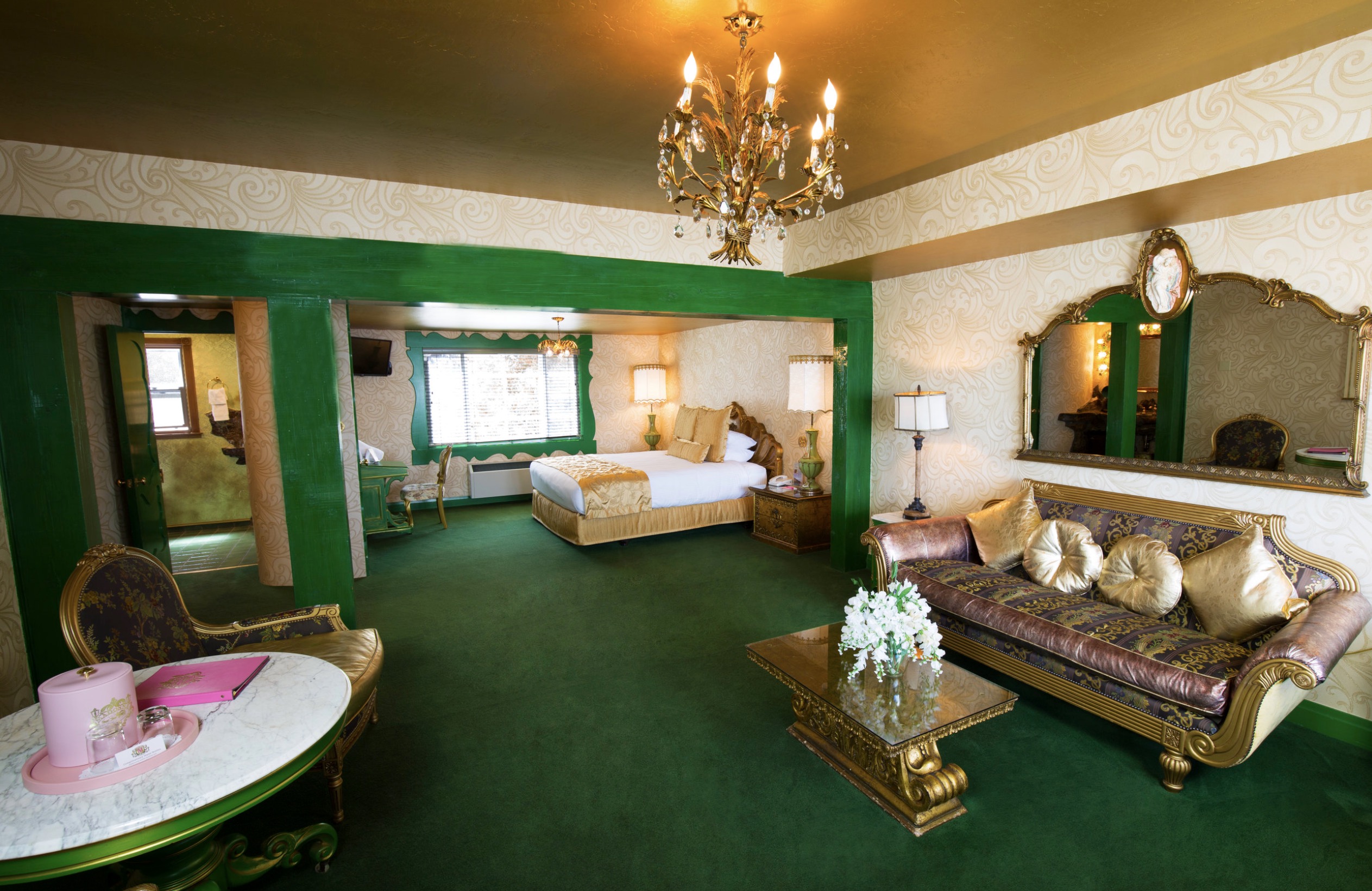 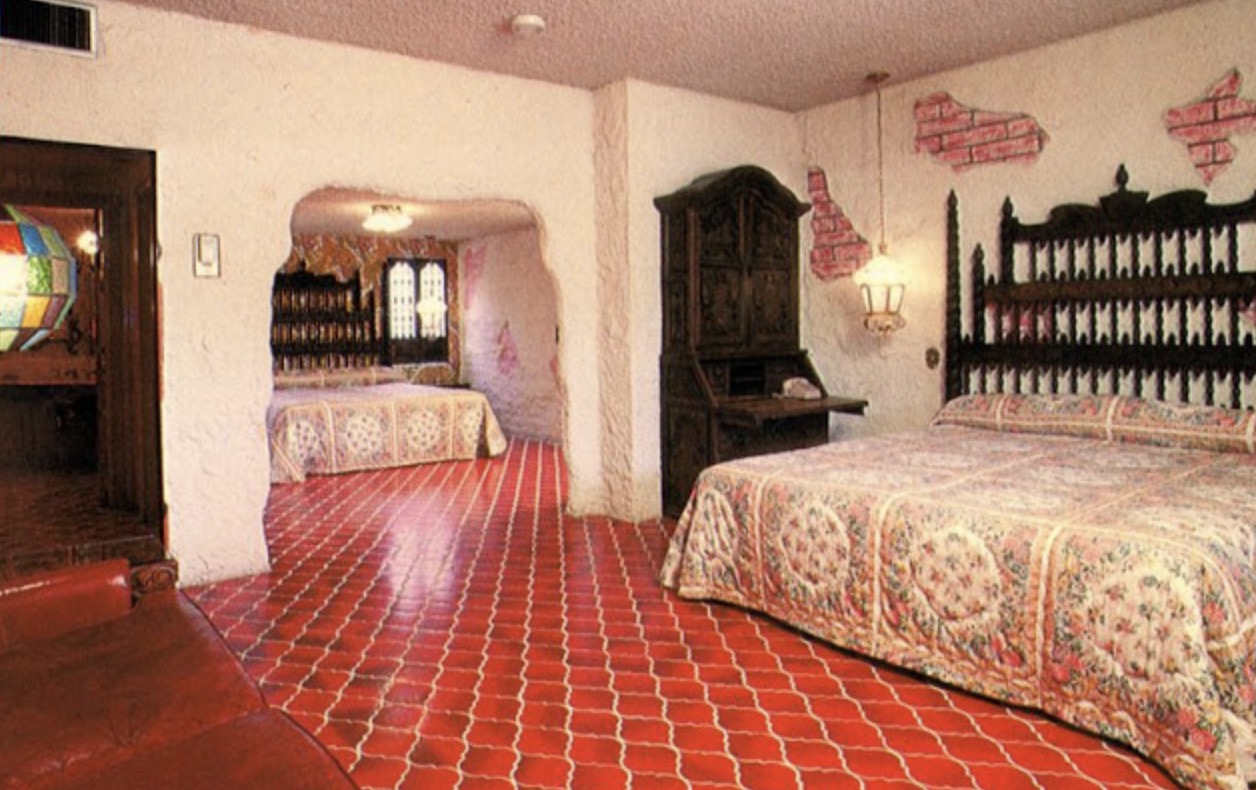 Or the room #209, the unfortunately named “Oriental Fantasy.” (Still has that name, by the way.) 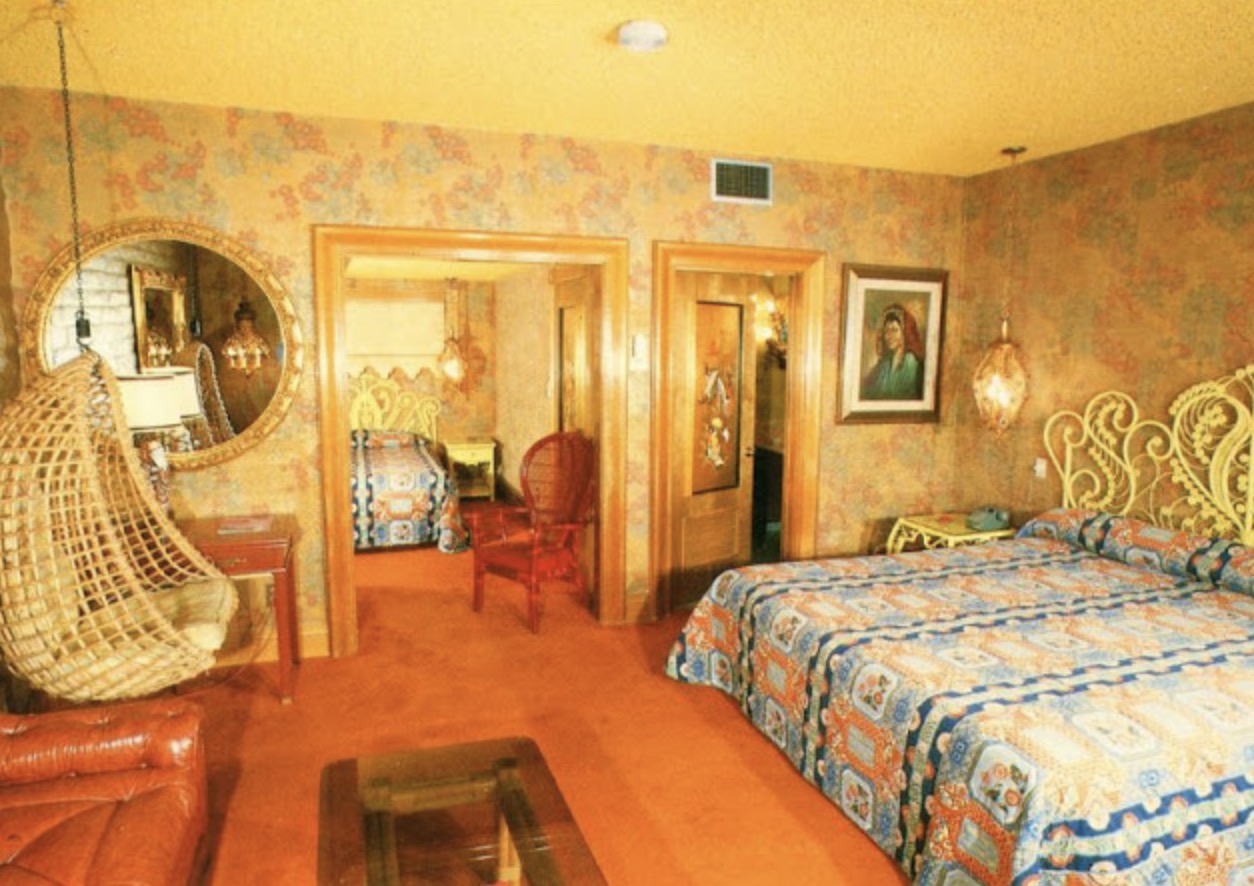 Other rooms are meant for couples having a romantic getaway. (Or a steamy affair.) Like room #181, “The Love Nest.” 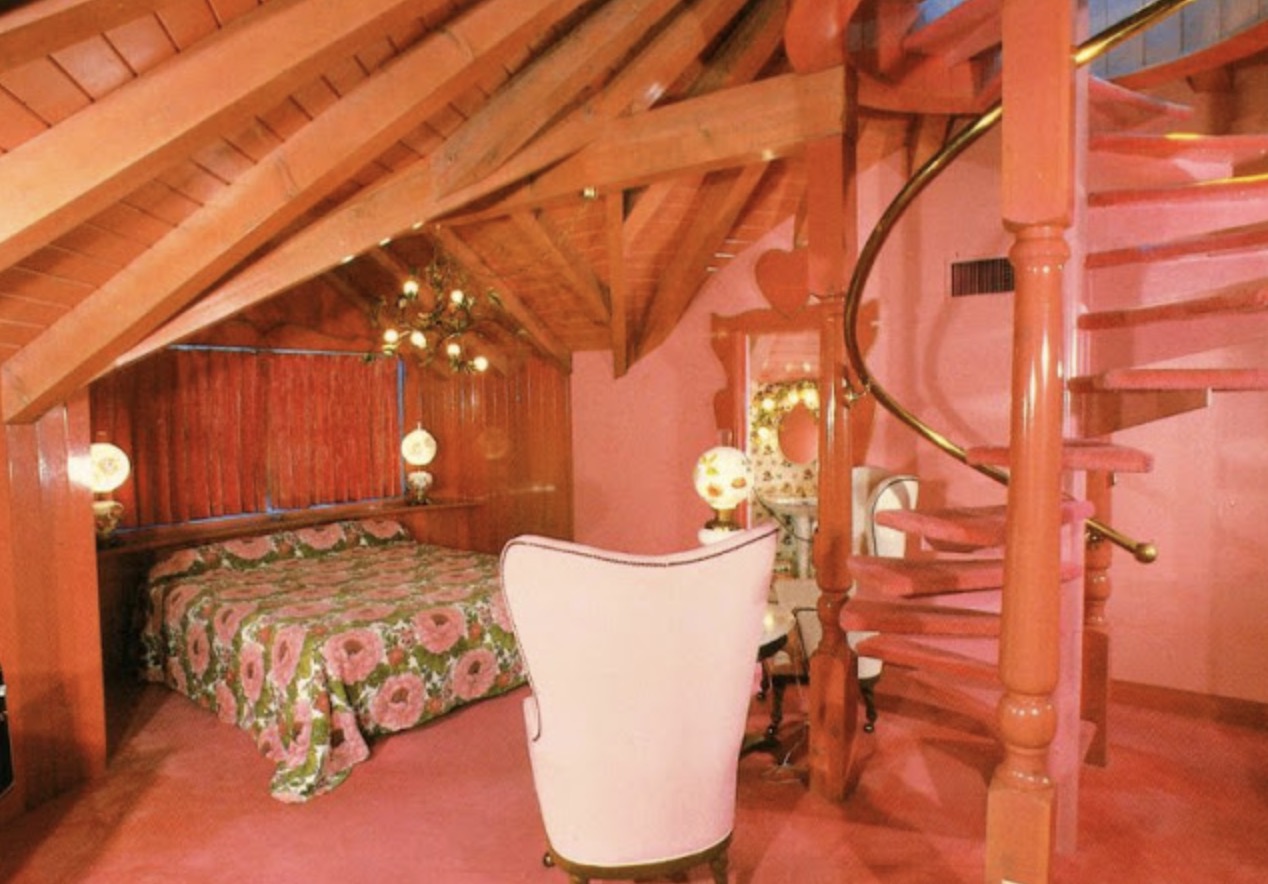 Or room #112, “The Rose Room,” which has levels of pinkness far above what’s safe for humans. 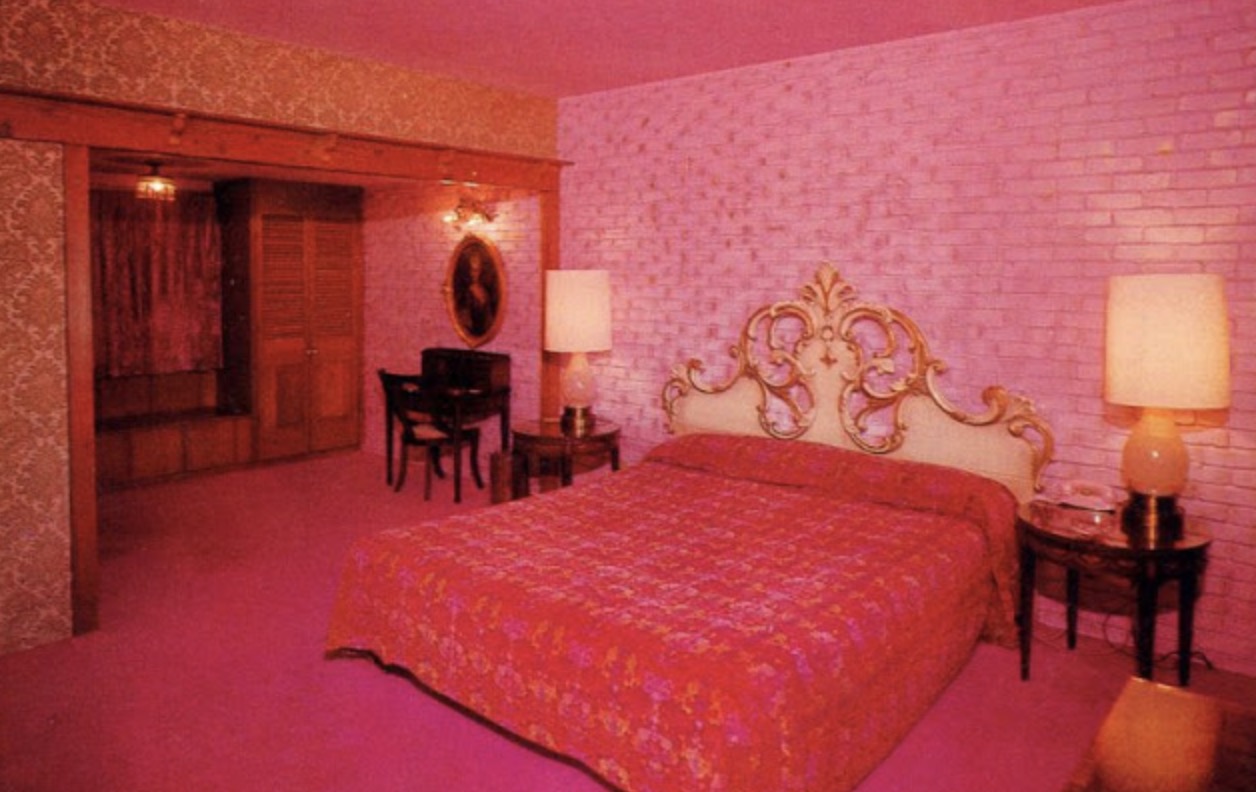 Or maybe you prefer your romantic eye sore in green? If so, room #149, “Old Fashioned Honeymoon” is for you. 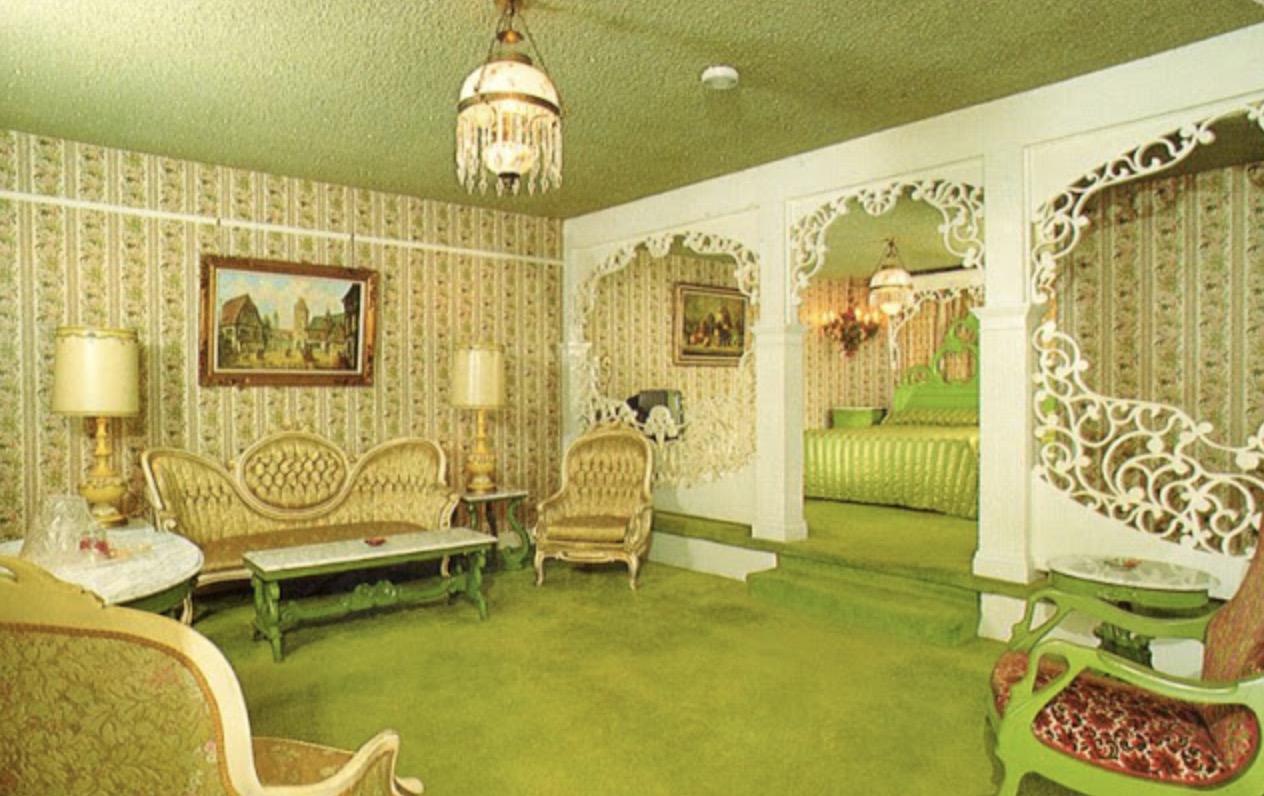 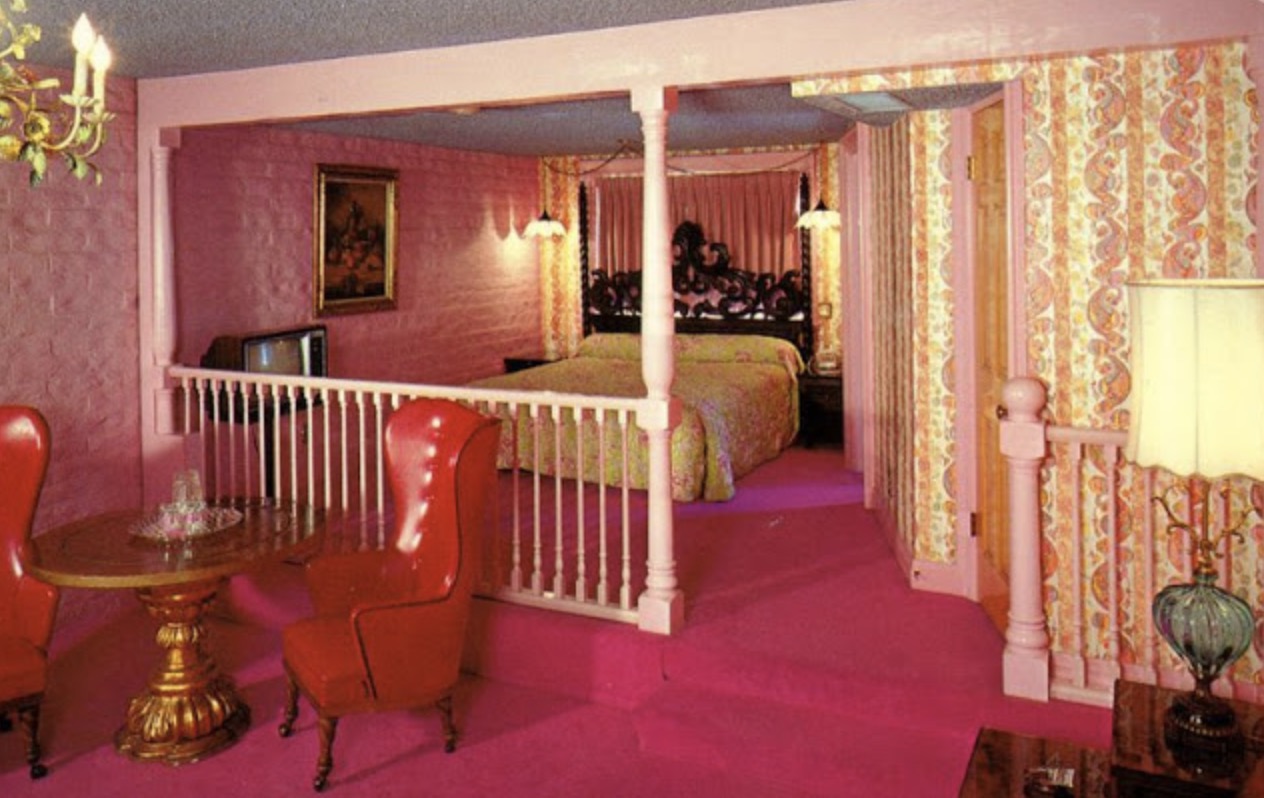 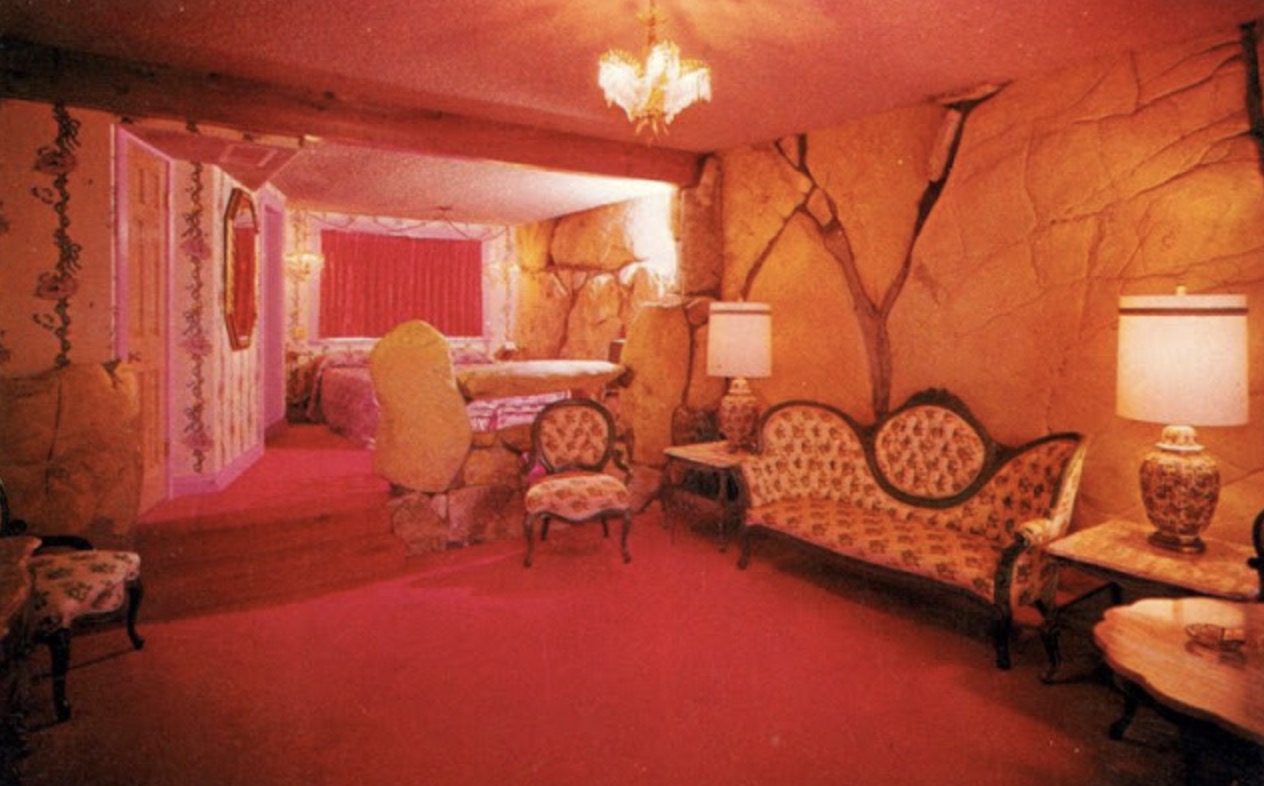 And then there are rooms based on a theme. Room #111 is “Classic Cars.” 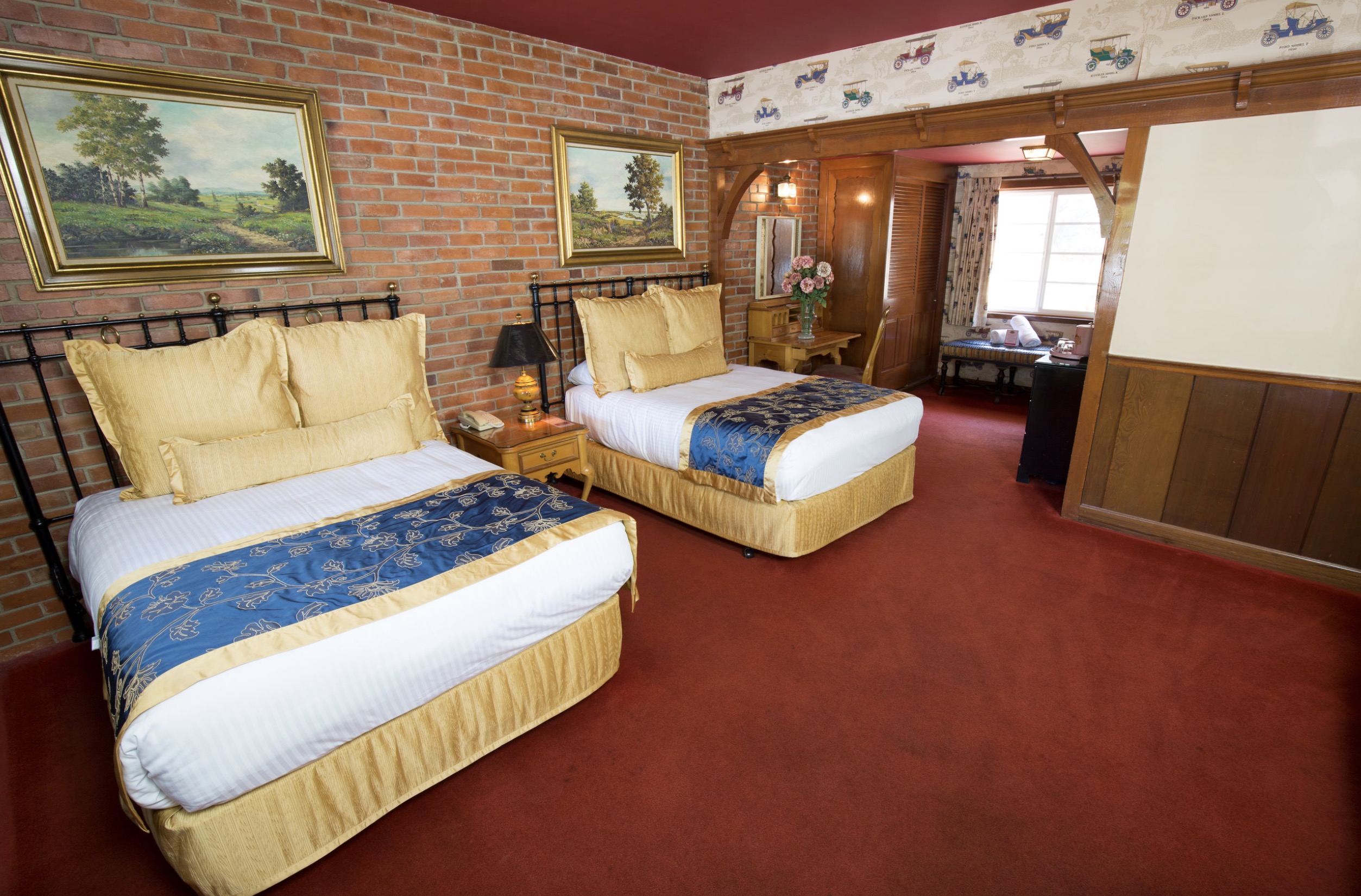 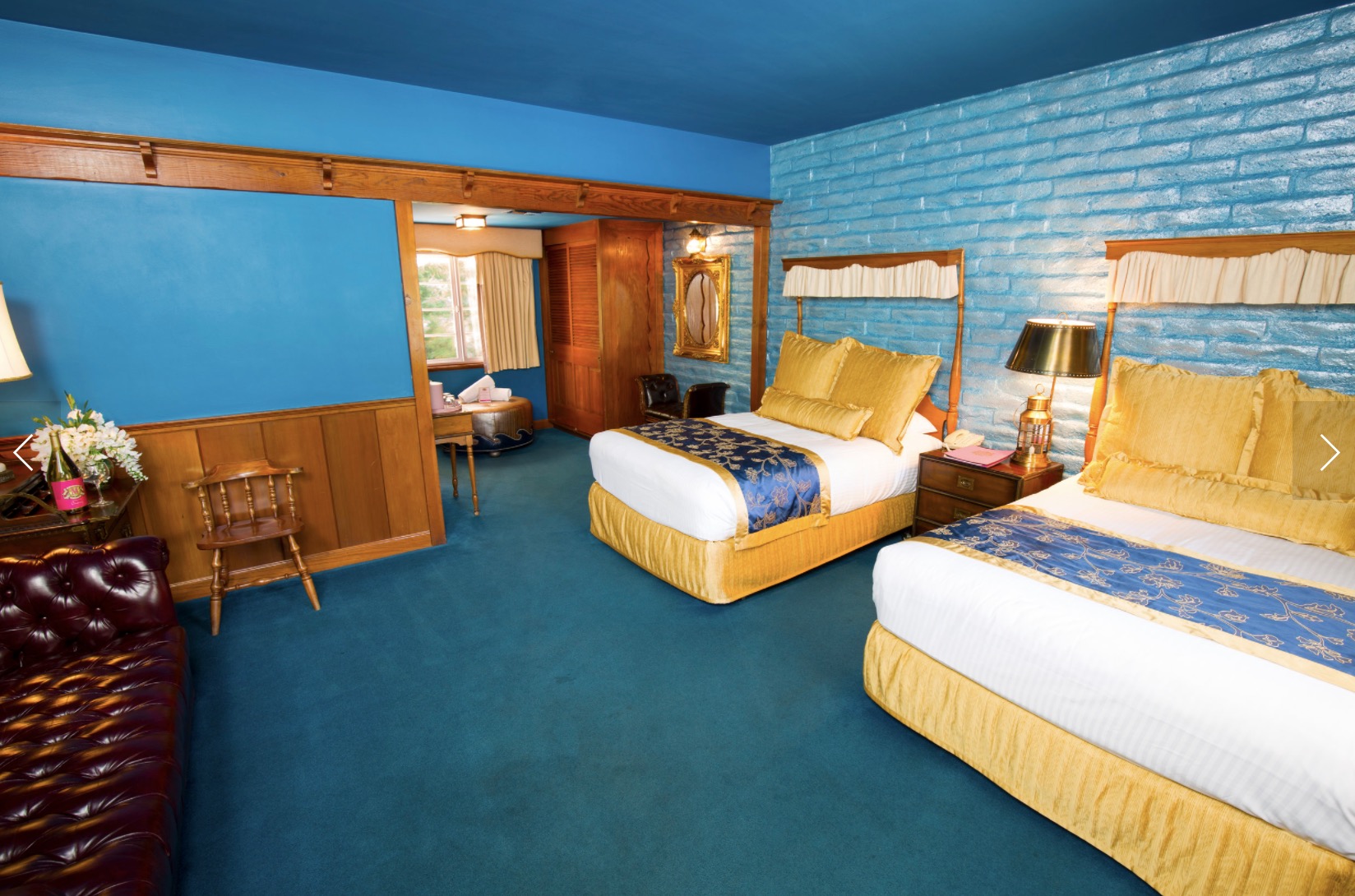 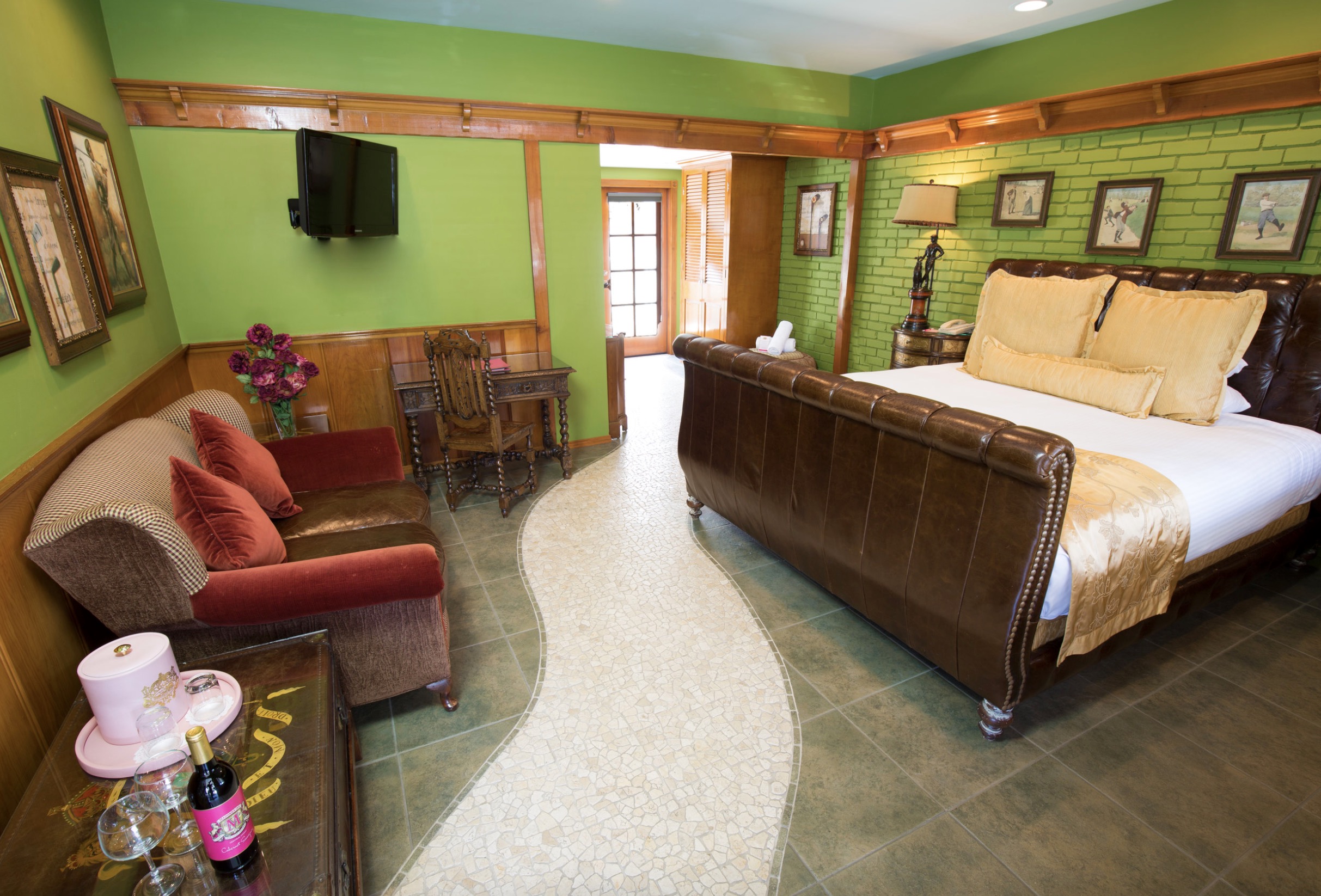 But the most popular of all the Madonna Inn’s attractions is a urinal. Not a joke! Weird Al mentions it in his 1978 song “Take Me Down“! The Madonna Inn men’s room features a “waterfall urinal,” which is a real working waterfall you can whiz into. For decades, men have been sneaking women into the men’s room to peek at the waterfall, a tradition that I’m glad to see continues to this day–here’s just one of many videos people have posted on Youtube.

You can check out the website here for info on booking, amenities, and the rooms, which each have their own description and photo slideshow. The next time you’re in the Central Coast region, you should definitely stay at the Madonna Inn. You won’t soon forget it.