Lots of us are reluctant to pursue our dreams. We believe that our dreams are too unrealistic, too likely to fail, and thus we never go after them. Well, friends, I’m here to tell you: never give up on your dreams, because they can always come true. Just ask the ladies of the Milton Lodge retirement home, who recently enjoyed a catered dinner straight out of Magic Mike. 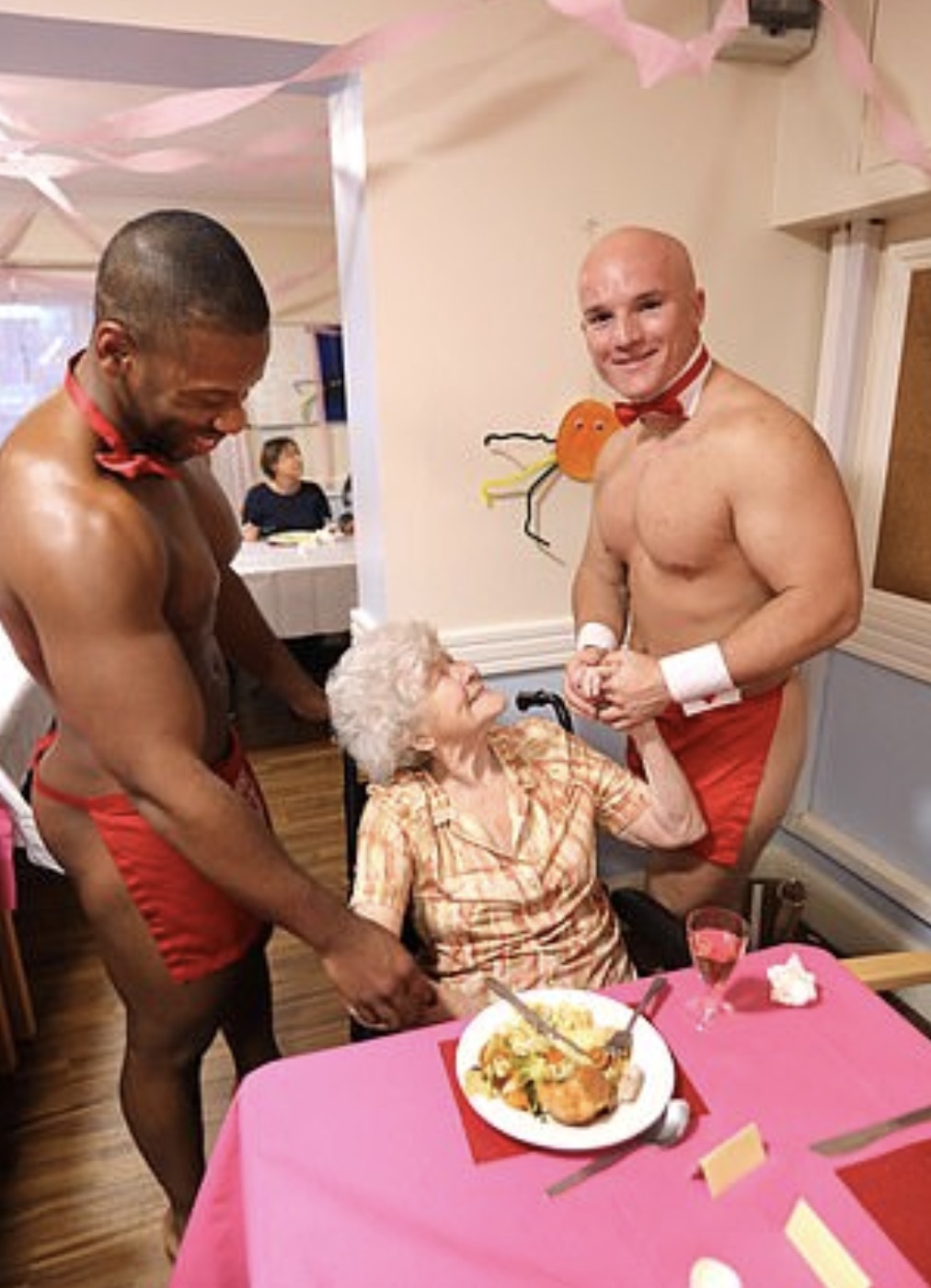 And it all started with a wish. Milton Lodge, which is located in Colchester, Essex, runs a program called “The Sparkle Initiative,” where staff raise money to fulfill the residents’ wishes. Usually, those wishes are what you’d expect, like seeing a play or going to the beach. But when staff asked 89-year-old resident Joan Corp what she wanted, her response was always the same: “a man.”

Joan is the coolest person in the world. 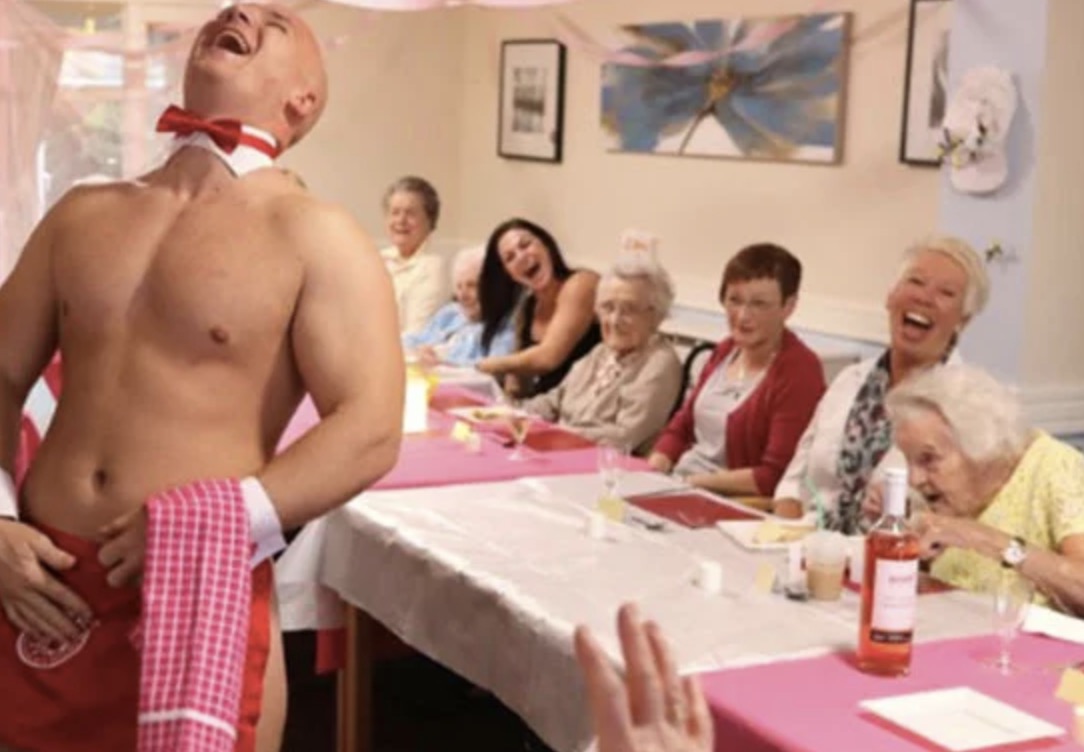 When Joan officially requested that the Milton Lodge bring in a bunch of male exotic dancers, the staff debated what to do. “We had a chat here and everyone was really keen to support it,” said activities co-director Claire Martin. “We had a look online and found a company called Hunks in Trunks.” 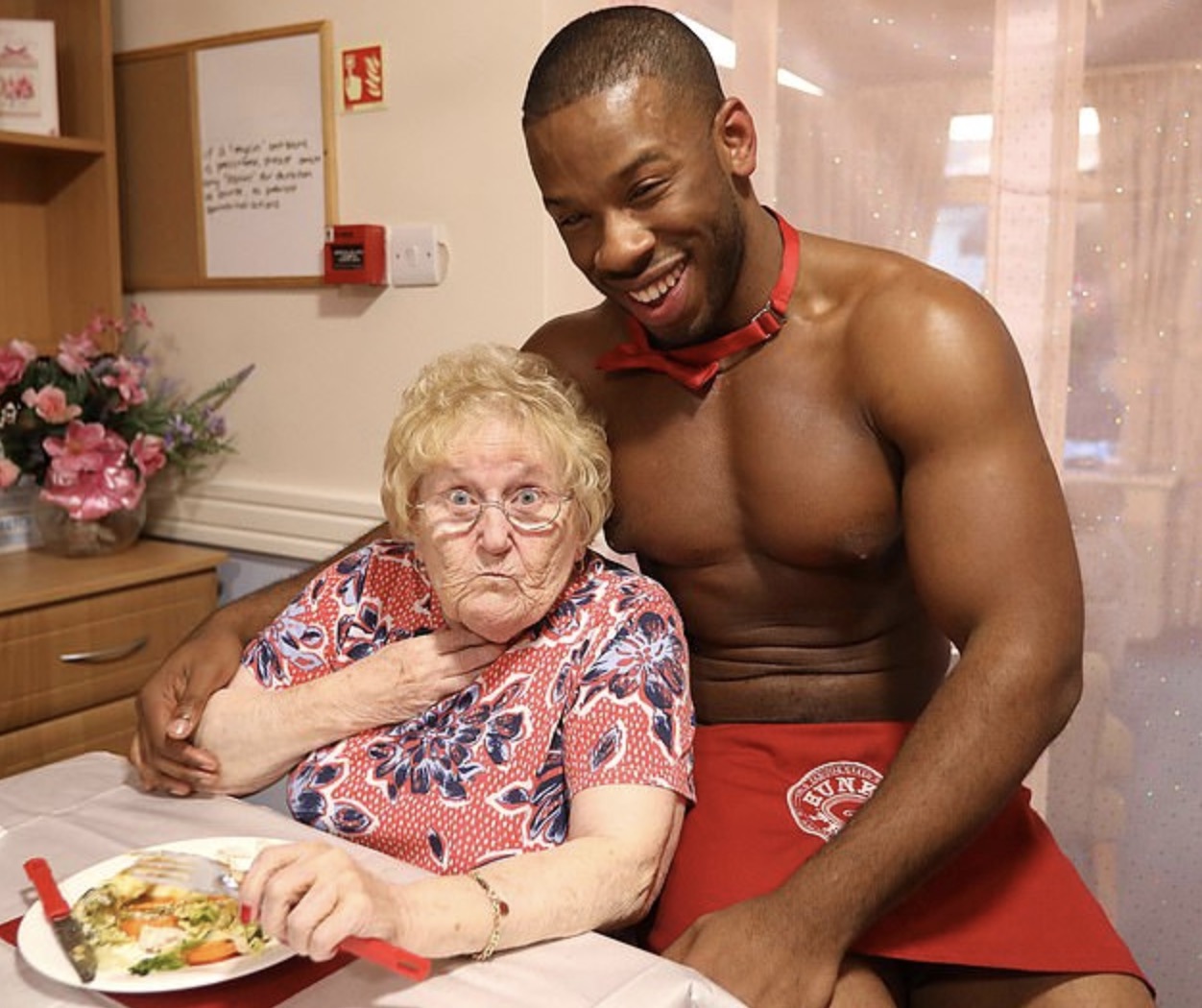 But Hunks in Trunks isn’t your run-of-the-mill Chippendale’s knockoff. It’s a catering and entertainment company hires out nude and nearly nude men for bachelorette partiers and other events. If you’re in the UK, you can hire Hunks in Trunks for their Nude Butler service, like the ladies of the Milton Lodge did. Or if you really want to splurge you can get their Naked Chef service, where a buff gentleman cooks your food, too.

Not sure if he’s naked while he does that. I’d have to think he’d be at risk of  painful grease splatters. 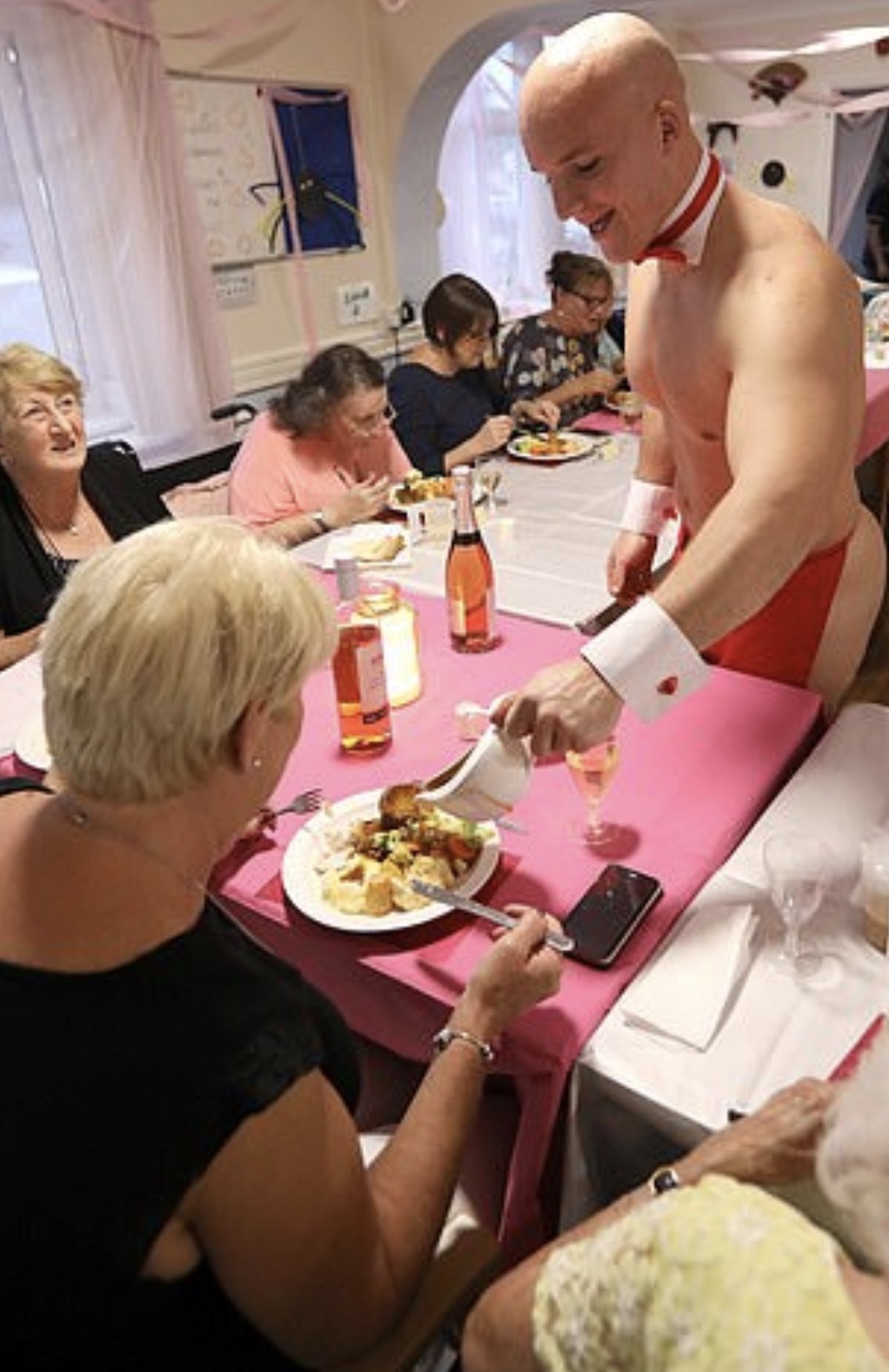 When the Hunks in Trunks arrived for the dinner, Martin went over what the Milton Lodge expected of them. “We asked them to do some harmless flirting, it doesn’t matter how old you are, so why not?” Martin said. “The ladies were really excited, they had all been giggling and they dressed up.”

The Hunks in Trunks served a dinner for 23–11 Milton Lodge residents, as well as some of their daughters and granddaughter’s. There was plenty of flirting and food–it was a three-course meal, including a roast. And after everyone finished eating, the Hunks in Trunks treated all the ladies to massages. 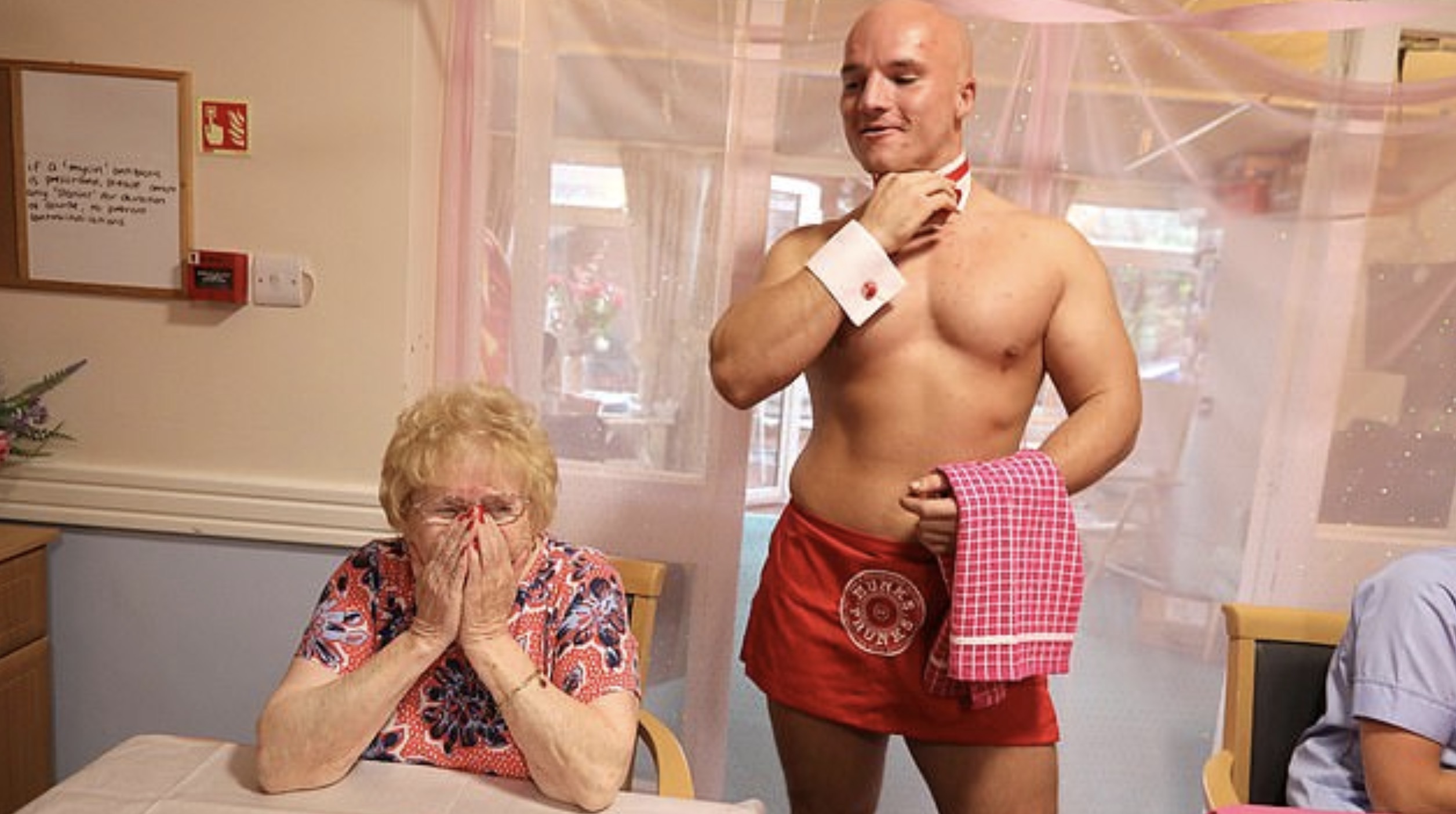 As you can see from the photos, everyone had a great time.  “I had the front seat,” said resident Gladas Smith, 82. “It made quite a change and the boys done well. It was a good evening.”

Milton Lodge’s oldest resident, Doll Jenkins, 99, was particularly impressed. “After it had all finished, Doll told the staff she wanted them back for her 100th birthday, so we are going to have them back,” Martin said.

You better! I say when you turn 100 you should get whatever you want. 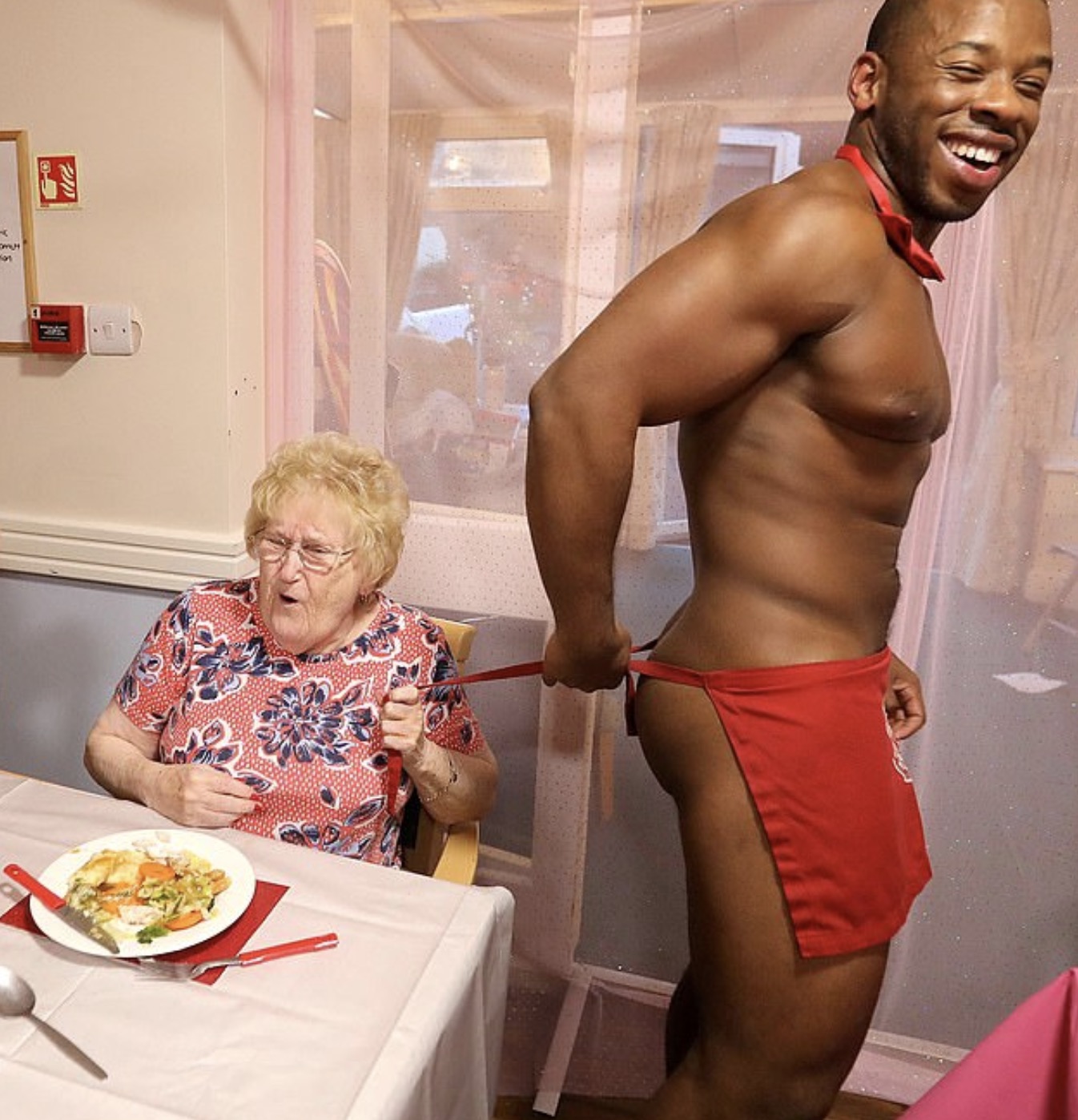 The story has gone massively viral, appearing in newspapers across the UK, the US, and Russia. Milton Lodge director Trui Snee told The Essex County Standard that everyone was surprised by the response. “”It’s unbelievable that it has gone so crazy. It was never done for publicity, it was what the residents wanted.” 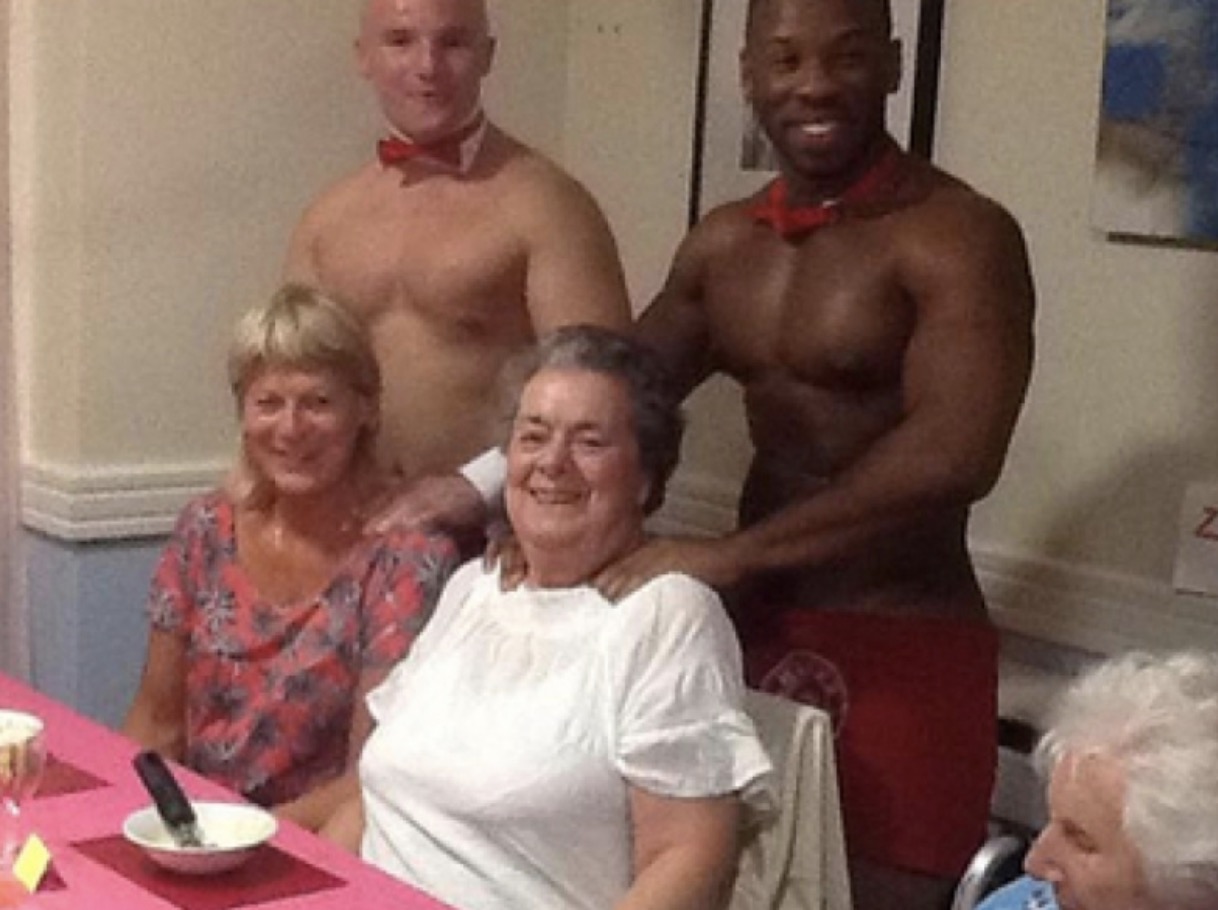 She also said that while some people did object to the event, Milton Lodge has no regrets. “Our saying is life doesn’t stop because you are in a care home. We will continue to do this as a team and go above and beyond.”

But most people were thrilled for the residents of the Milton Lodge. The story even had some younger folks looking forward to their own retirements. So thank you, ladies of Milton Lodge, for showing us how to live our best lives and never give up on our dreams. Rock on!

Can You Solve This Crime by Spotting the Single, Crucial Detail?
Major Beauty Fails People Are Enduring While Stuck at Home
Luckily These Scenes of Horror Just Turned out to Be Optical Illusions
15 Times Librarians Had The Best Sense Of Humor
Enjoy These Tweets About the Various Stages of Quarantine We’ve Had to Deal With
New Study Proves Millennials Actually Do Have It Harder Than Generations Before Them