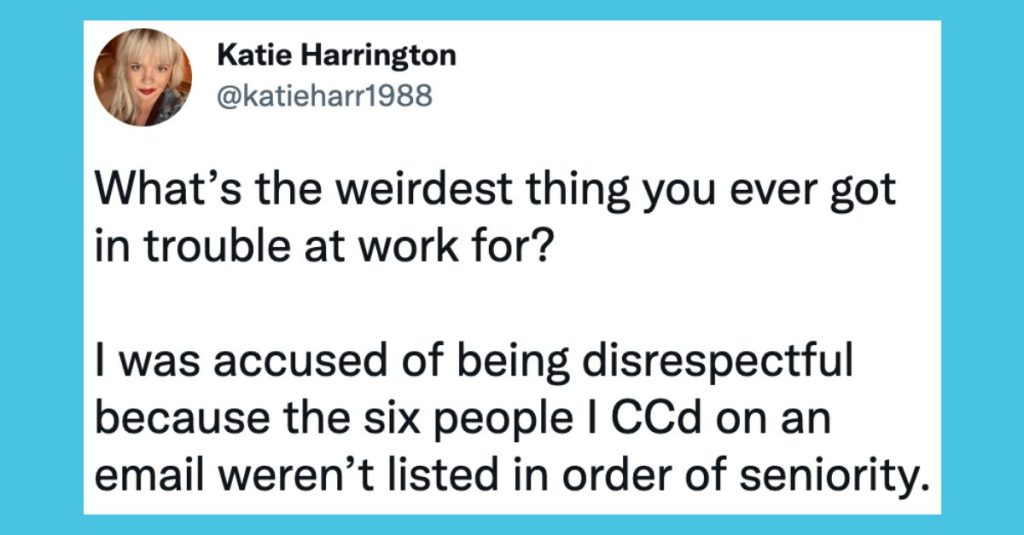 At my very first job when I was a teenager, I got sent home on my very first day of work by a manager at the fast-food taco place I worked at.

The manager who overheard me ask my co-worker to go next door said I was being bossy. Let me reiterate that this was my first day of my first job ever and my co-worker was the same age as me.

This lady was nuts! Long story short, she ended up getting fired about a week later and I worked there for about a year until I got another job.

Take a look at these tweets from people talking about the dumbest reasons they ever got into trouble at work.

This is so weird to me.

What’s the weirdest thing you ever got in trouble at work for?

I was accused of being disrespectful because the six people I CCd on an email weren’t listed in order of seniority.

Okay, whatever you say.

When I worked in Lidl, I got told by the manager that I “wasn’t hired to think.” I asked him if he meant it and he said yes. From that day on I asked what needed to be done every single time. It drove him mad, but when he told me off for it I told him “I wasn’t hired to think…”

3. You did the right thing.

I asked like 3 months in advance to take a day off to attend MY OWN graduation ceremony from college. And the day before the ceremony, I was told by my ex-boss that if I took the day off, not to bother coming back. So yeah: here’s a picture of me in my graduation. pic.twitter.com/icS4lhDvUn

Solving a big problem at work, but I didn’t tell my boss how I came up with the solution. When he presented to his bosses, he felt embarrassed he could not answer how HE came up with the idea and HAD TO give up the credit

5. It was totally worth it.

Got caught with another girl at work weighing our heads on the office postal franking machine to see how much it would cost to airmail them to the US. ??‍♀️
Hated the job anyway ??

Talk to me about it later…

For not taking calls during my lunch break ? this was like 4 years ago at an old job. I didn’t stick around long after this. pic.twitter.com/ynAJkmpZwl

I guess you need to be more rude?

It was once written in an annual review that I was too happy.

Better knock it off…

I got an official warning for humming the theme to Thomas the tank engine whilst at the photocopier…..I had been doing it for around 6 months.

Can’t please everyone. Or anyone…

(I.e. why aren’t you working past your contractual hours?)

New boss asked me to cut & paste some info in a Word document & was aghast when I did so using the, er, cut & paste function. Swore at me, then made me print the doc out, cut it up with a pair of scissors to move paragraphs around & then re-type it from scratch in the new order.

Have you ever gotten in trouble at work for something dumb?