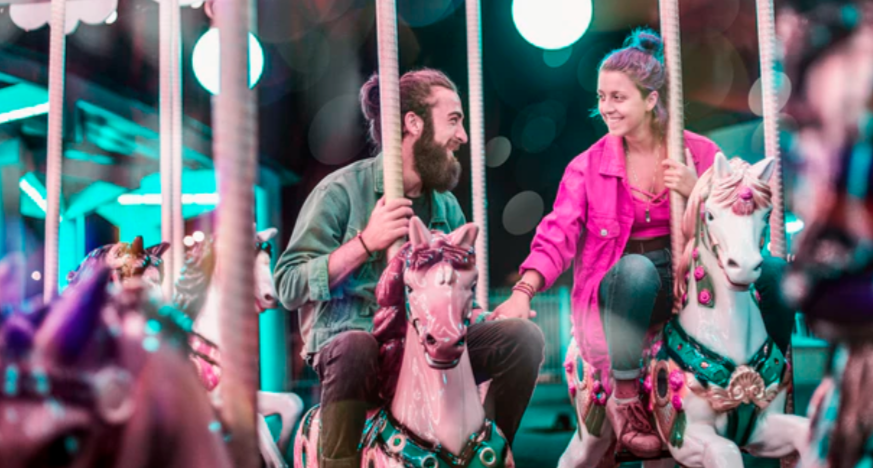 Tinder is a whole lot of weird. If you’ve spent time on there swiping right and left, you know exactly what I’m talking about.

Now, if you have been on Tinder dates, see how yours measure up to these horrific tales on AskReddit.

“Went on a date with a girl who had already told her whole family about me, before we even met. And she wanted me to meet them in person on the first date.

“This was back when tinder first came out and wasn’t quite as known as a hookup app. We met and had a great first date. Second date was even better. Things kept going for about 2 months when she told me she went out with me originally in an attempt for a Dinner with Schmucks type thing where her and all her friends would bring the worst Tinder date. We both really liked each other, but I couldn’t get over how we started.”

My roommate is my tinder nightmare.”

“My buddy isn’t the smartest man. He picked a chick up and drove to a motel. They were walking into the room and she says, “I forgot my purse in the car do you mind if I go grab it?” He says, “yeah that’s fine,” and tosses her the keys. 5 minutes later he walks outside wondering where she is and his car is gone.”

“I went on a date with a guy and the entire time he was talking about how men are superior and how there have been scientific studies to show that “women have an emotional reaction to the color red when they see it”. I wonder why he was single.”

6. Good on paper doesn’t mean much

“I dated someone I met from tinder for a month. Seemed good on paper: masters student, yoga teacher, cultured, etc.

Found out she was doing heroin and didn’t consider that a big problem. I actually had to explain to her the definition of a high functioning addict because she felt that having a job and going to school meant the heroin thing wasn’t a problem. We broke up and she went back to her junky ex-bf.”

“There was this guy, he was a solid 10 in his pictures. He messages me, asks me if I want to meet up for coffee, so I say yes. He messages me and tells me that I have to pick him up… Okay whatever, I’ll do it. I pick him up, and we decided to go eat instead, he’s super funny and cute so we hangout some more after dinner. Then he pulls out his phone and proceeds to tell me that he has a son and his baby momma took of to Washington (but has no idea what part or anything) with him and he hasn’t seen him in months. So he then takes out his phone and tells me to go through a folder on his phone of pictures of his son.

He sat there and made me look through every single one, and he would tell me the back story to basically every single video and photo in that folder. I felt so bad, but man I was happy when he left. That whole date just got so weird after that, he did some more stuff but those are good stories for another time lol.”

“Showed up to the restaurant, waited about 30 minutes. Ordered myself some food and was about to leave when he texted me: “there’s a liquor store across the street from the restaurant, can you pick me up 2 six packs?”

I told him I wouldn’t. He says he’s decided to play frisbee with his dog instead. Deleted app, went to liquor store, picked up wine and went home.

He texted me for a month or so after to tell me he’s just bought tickets to see me dance (I’m a retired ballerina, haven’t been in anything for a few years). Then he texts me an hour after and tells me how great I was on stage. I never responded.

Dating is too confusing. I’m all done.”

“Matched with my cousin.”

10. A different kind of nightmare

“My Tinder nightmare began on Jan 8 2014 when I started texting with a beautiful woman who I knew was out of my league. I’m a 50’ish Caucasian guy, out of shape, overweight, but otherwise stable and normal. She was a 30 year old Black woman, college educated, stunningly beautiful and very elegant and slender. Nonetheless, after a few days of texting I invited her to join me for dinner at a very nice restaurant downtown. To my dismay she actually accepted my invitation. I was waiting for her at the bar and when she walked in my jaw hit the floor. She was so beautiful I literally lost my breath for a moment. She was taller than me in her heels and was wearing a beautiful short dress with the most amazing legs I had ever seen. She greeted me with a bright smile and a gentle hug and we were escorted to our table. We had a very good date, the conversation flowed, and she seemed to have a good time as well. We decided to continue the date and went to a couple of bars for drinks. Finally she said it was time to go home and, since she had taken Uber earlier, I offered to give her a ride home and she quickly agreed.

All this time I thought that, even though the date was fun, and comfortable, I assumed it would possibly lead to a friendship at best considering the obvious differences. Well when we got to her place we talked for a few minutes more. I offered to walk her to her door but she declined. She then got out and walked around to my door. She leaned through the window and planted a very brief but sensual kiss on my lips. My heart stopped! She then leaned back and smiled. I was able to stammer out an invitation to go out again and she accepted without hesitation. I was on cloud nine! I knew that this remarkable woman would have a profound affect on my life, it seemed pre-destined.

Fast forward a couple of weeks, She and I had been seeing each other nearly every day and I was developing strong feelings already. But, something was wrong. I had a weird nagging sense that she was hiding something. Although she was being very affectionate , something just felt off. Then finally it happened. We were out at a bar together. It was a good time but she seemed distracted. As we were leaving she turned to me and said, in a serious tone, “we need to talk”. I thought, this is it, the differences between us are too much for her and I’m about to be friend zoned. But nothing prepared me for what came next. She asked me to just listen and not say anything, and I agreed. She then started out by saying that she had developed strong feelings for me but there was something that I needed to know about her that might make me want to change my mind about pursuing a relationship. My mind was spinning and so many scenarios raced through my head. Is she married? Is she a criminal? Then I remembered a few day earlier when we were making out and I touched her breast lightly and realized that she had breast implants because it was quite hard. So I thought, is she a trans?

But, as it turns out, she wasn’t but that would have been better than what came next. She looked at me, and with a tear in her eye, she told me that she has stage 4 breast cancer. She was originally diagnosed 4 years earlier as stage 3 and had beaten it back into remission after having a double mastectomy along with radiation treatment and chemotherapy. Now it had returned as stage 4 and she was to start chemo again in two weeks. I was floored! She then stated that she will understand if I wanted to turn and run and she wouldn’t think less of me for it. My response was to re-iterate that I adored her. And I thought she was an amazing woman and if she wanted me to take this journey with her that I would be honored to do so. We kissed and just held each other for a while. Finally she said goodnight and went to her car to go home. I cried all the way home. We had a full amazing year together. I had to go to Japan for work and she met me there in between chemo treatments. She never cried and was always elegant. I learned what the true definition of grace meant. We lived a lifetime in 2014. She died 9 months ago, 15 months after we met. I am a much better man for having met her and shared in her struggle. I love you and miss you so much Genny!”