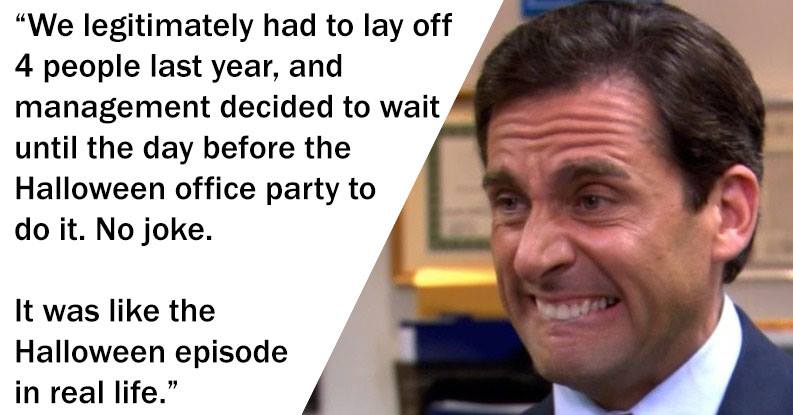 The American version of The Office is one of the most successful sitcoms of the 21st century, airing 201 episodes over nine seasons, from 2005 to 2013. There are many reasons why the show worked. It was damn funny, and the cast and writers were some of the most talented ever. The show’s themes of the misery of working life, and the struggle to find happiness in spite of it, resonated with everyone who’s ever been a stuck in a cubicle.

And then there was Michael Scott, the quintessential terrible boss. He made the show relatable, because everyone’s had a horrible boss. (And everyone’s probably been a horrible boss once or twice.) But while Michael was hilarious, he wasn’t particularly realistic. Seemingly every week, he would get away with a stunt that would get you or I fired on the spot. He was an exaggerated comedic character, not grounded in reality.

Or so you would think! Reddit Multicalibrador recently posted a question on Ask Reddit, inviting people to share their bosses’ most Michael Scott-like moments. The thread got over 6,000 comments and 21,000 upvotes, because it turns out that many real life bosses are just as insane as Michael was. Here are 15 of the best responses, which are just as crazy as anything that happened on the show.

“It was this guy’s last day with the company, and the managers brought in a cake for everyone to share. A very nice farewell gesture.

Except he wasn’t moving to a new city or leaving the company for a new job. He had gotten fired. The managers literally fired this guy, then called everyone into the kitchen and said ‘Okay, today is Steve’s last day with the company, let’s have some cake!’ Most oblivious, socially awkward, tone deaf moment imaginable.” – bird-ghost

2. Let us show you our appreciation…or else.

It fell on my day off, and I had to come in, to participate in the team-building activities that were scheduled. It went from 7am to 7pm, which was longer than a normal shift. That was my only day off that week.” – 1YearWonder

“My boss put candles in his dishwasher to clean them and they ended up melting and distributing a thin layer of wax over everything.” – frangoon1984

“My boss took us to a Farmer’s Market for an office lunch outing, and when me and my two coworkers walked over to his table after having browsed and eaten, he told his attorney friend he was with, ‘They don’t like to be too far from daddy.'” – carbcat

“I had a boss who got a promotion to senior manager. The very next day he pulled into the parking lot with a BMW 1-Series. No one on my team even knew they made a 1 series (cheapest possible BMW/badge car). He gets out wearing a BMW polo and a white BMW hat. He offered to take me to lunch in it. He jumps on the highway, adjusts his BMW hat and says to me, ‘I don’t exactly do 60 in this thing!’ does a little triumphant laughter and starts going 80. There was a cop on the bridge above us. We were immediately pulled over. I will never forget the look of defeat on his face.” – BasicAlgebrah

“Announced it to everyone if he got laid the previous night. (Fortunately it wasn’t that often).

Same guy put it in one person’s performance appraisal that she’d get a better rating next year if she didn’t ‘Do something dumb like get pregnant.'” – Jakebob70

“We had mice. Boss man was terrified of mice and a total skinflint who didn’t want to pay for an exterminator. His big idea (I shit you not!) was to give me cotton to put in my ears and a blow horn. He then opened the back door, closed all other doors in the little shop, and I had to attempt to herd mice out of the store with a fucking air horn, with cotton balls sticking out of my ears. I tried to explain why it wouldn’t work, but he essentially told me not to worry my pretty little head over it, and that was my entire afternoon. Most ridiculous shit I’ve ever done at a job ever before, and ever since.” – taoshka

“A few coworkers and I competed in a local Office-themed trivia contest. We came in second place, and one of the prizes was a ‘World’s Best Boss’ mug. We brought it into work and displayed it proudly like a trophy in one of our offices. My boss–who was not involved in the contest, has never seen The Office, is not friends with or well-liked by any of us, and is a huge idiot–saw the mug in someone else’s office and just took it. None of us could figure out where it had gone until we saw her drinking out of it.” – MyHandsAlwaysHurt

“After a successful project, owner of the company invited everyone out to lunch (about 12 employees) at a nearby restaurant by the office. Little did she know, the place was very expensive, so she bounces early before the check comes, stating that she had a client call. She gives us money to pay for her meal and takes off, leaving the rest of us to figure out the check. It also turns out she didn’t give us enough money to pay for her potion of the check so someone had to throw in a few extra bucks to cover that.” – Ricetaco

“As a blizzard approached, he offered to drive home anybody who needed a ride because he’d just bought a new ‘badass’ Hummer H2 that ‘could drive through anything.’

And hour later, he and three of my coworkers are sitting in his new SUV in a snow drift on the side of the road, waiting for the wife of one of them to pick them up.” – Smiling_Mister_J

“Made someone come with him to get his shoes shined because he wanted someone to talk to. Except, we all wore sneakers, so the lucky guy got to just stand there and wait while he got his shoeshine.” – Hrekires

“My one boss, an absolute nightmare of a human, carried all of his paperwork around in a black trash bag. And he was rich, like filthy rich. he inherited his father’s contracting company and during the boom of the early 2000’s made a ton of money.

But he said he didn’t trust briefcases… yeah, i know. So one night he left his trash case in an office and a cleaning woman threw it out. All contracts, building specs, whatever, gone.” – Theres_A_FAP_4_That

“Wore a tuxedo at work lunch to give out superlative type rewards. The lunch was at a local sports bar.

He had never seen The Office.” – Chosen_Fighter