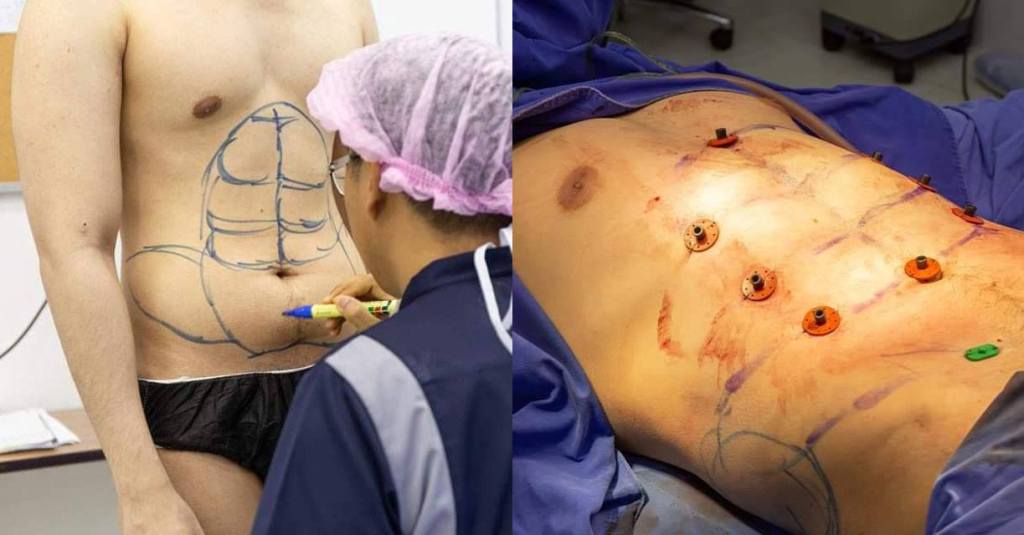 People Are Having Plastic Surgery To Get A Six-Pack

Six-pack abs are considered attractive these days, but for many they’re just not attainable. For lots of us, genetics decides that, no matter what we do, we’ll never have washboard abs–not even if we do 1,000 crunches every morning and eat nothing but celery and egg whites.

If you’re someone who can’t and won’t ever get a six-pack, the best thing to do is accept your body for how it is. And maybe reflect on how realistic and absurd our society’s beauty standards are.

Or at least that used to be the best thing to do, because now a surgeon can just give you a six-pack! All you need is a couple thousand bucks, and your torso will look exactly like Zac Efron’s torso.

The technical term for the procedure is “abdominal etching.” It was first developed in Texas in the 90’s by Dr. Henry Mentz, but it’s become much more popular in recent years.

Masterpiece Hospital in Bangkok, Thailand regularly performs the surgery. “We’ve been doing this for about three to four years now,” hospital CEO and surgeon Raweewat “Sae” Maschamadol told Coconuts Bangkok. “We get anywhere from 20 to 30 customers requesting a six-pack every month.”

Dr. Maschamadol is careful to point out that the procedure does not involve implants, because they look too fake and don’t last very long. Instead, abdominal etching, which is also called “six-pack liposculpture,” involves making tiny incisions either in the belly button or within the abs’ natural creases–hence the name “etching.” Then, the surgeon sucks out the fat from the abdomen’s superficial and deeper layers in order to accentuate the body’s natural ab lines. Depending on the patient’s preference, their new six-pack can be softer or more defined.

If you decide to get your abs sculpted, Dr. Maschamadol stresses that it’s important to still exercise to maintain your musculature. Recovery can take from three to six weeks, and Masterpiece Hospital charges THB 120,000 for the procedure, which is about $3,700 U.S.

Like any plastic surgery, abdominal etching involves risk, but not an excessive amount. A study by the American Society of Plastic Surgeons found that about 12% of patients experienced minor irregularities. One in ten developed post-surgical pockets of fluid called seromas, which require draining.

Most of Dr. Maschamadol’s patients actually aren’t couch potato types, but “fitness freaks” who already have muscle and just need definition. “Most of our clients come in with a lot of muscle, they just want to save themselves months of leaning down,” he said.

One former patient is Thai model Ome Pangpaparn, who wrote about his procedure on Pantip. “Fitness is not always the answer,” he wrote. “I worked out regularly, but I still couldn’t get rid of the fat around my stomach,” he wrote.

Here are the photos of his progress. On the left is Ome before the procedure; the middle is Ome two weeks after surgery; and the right is Ome one month out:

Ome isn’t ashamed to let people know he obtained his look through plastic surgery. “I do what I can. But in the parts I can’t, I leave it up to the doctor. I am confident that it will bring me more happiness,” he wrote.

If abdominal etching sounds like the right procedure for you, great. But fair warning: the Dad Bod is becoming more and more popular. Some day soon, a plastic surgeon will no doubt come up with “abdominal schlubbification.” We’ll be waiting for you.