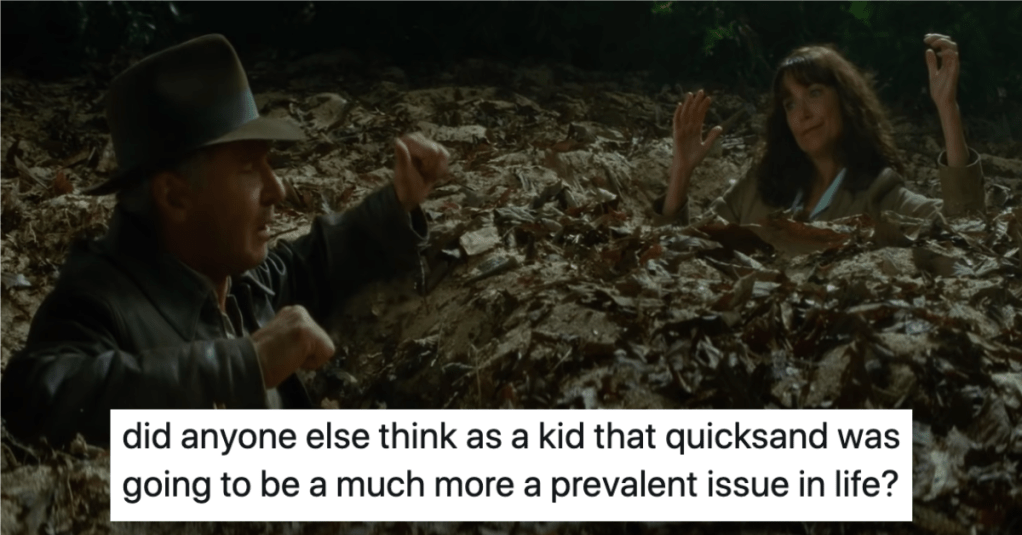 People Admit the Irrational Fears They Had During Childhood

I think we can all agree that 99.9999% of us had fears when we were kids that we later realized were totally irrational and pretty funny.

Maybe it was getting caught in quicksand, maybe you thought an escaped lunatic lived in your basement, or perhaps you thought every clown you saw was out to torment you and your family…actually, that one COULD be true.

But anyway, the point is that we’re all afraid of stuff during childhood that we think are kind of hilarious later in life.

People took to Twitter to share the irrational fears they had when they were kids…let’s see what they had to say.

I really hope parents today still use this one.

Do parents still tell their kids “your face is going to get stuck like that” when they make ugly faces? Or was that only used to traumatize our generation?

2. I used to have nightmares about it.

I’ll never figure out the Z!

Did anyone else as a kid, believe that when you got older you had to write in cursive all the time?

I still have yet to encounter any…

did anyone else think as a kid that quicksand was going to be a much more a prevalent issue in life?

4. You thought they were everywhere.

And that you would definitely get sprayed.

Did anyone else genuinely believe as a kid that if you swallowed a watermelon seed, you’d grow one in your stomach???

You don’t want to get sick, do you?

Who else believed as a kid this silica gel packs had poison in them…? ☻ pic.twitter.com/oQhWOhN8VD

You thought it could happen to you.

Why did you believe that, sir?

That my family was going to intentionally abandon me in a grocery store. I had a survival plan and everything. #WeirdChildhoodFears

9. Don’t let any limbs hang over the side.

It was part of the routine.

11. Flowers in the Attic haunted me.

And we didn’t have an attic, either…

Getting locked in the attic. And we didn't have an attic. So no one would ever look for me there. #WeirdChildhoodFears

12. Studying up on volcanoes.

Did anyone else as a kid think volcanoes would be a much more pressing issue in day to day life than they turned out to be?

What were the childhood fears you had that you later realized were pretty silly?

Don’t be embarrassed! We all have ’em!