When a young adult finally reaches the age when it’s time to move out of the family home, it’s difficult on everyone. For the young adult, you’re leaving the safety and security of home and venturing into the unknown. And for the parents, it’s just as disruptive. First of all, the person you love dearly no longer lives with you. That’s painful under any circumstances, even when it’s a normal part of  life. On top of that, raising a child affects literally every part of your daily routine for 18+ years. With your child no longer living at home, your entire day gets reshaped. It takes time to adjust.

As with lots of things in life, one way to make empty nesting a lot less painful and scary is to find the humor in it. And that’s exactly what Amy and Randy English of Pontotoc, Mississippi did when their daughter, Haley Jones, recently left home, with an “empty nest” photoshoot.

Haley is a full-time nanny who started a photography business back in January. In March, Haley signed a lease for an apartment in nearby Oxford. At the time, Haley tried to mark the occasion by photographing her mother in front of her new apartment complex. But it didn’t feel right.

“She wasn’t feeling it,” Haley told Insider. “I snapped a picture anyway and she just looked sad. She said that we should do a photo shoot closer to my moving day [instead].”

With time, Amy and Randy’s attitude about Haley’s move-out changed. “Fast forward to a couple weeks ago, move-in day was getting closer and she was realizing they would soon have an empty nest,” Jones told People. “Then we just decided together that it would be a fun thing to do. All of the signs were her idea! She nailed it!”

The photoshoot was inspired by pregnancy photoshoots that dominate social media. In one photo, Amy and Randy posed with a silver “zero” balloon, and a sign that said “Expecting 0 Kids, June 2019.”

In another photo Amy and Randy had some fun with the difficult emotions associated with empty nesting. They posed with a sign that said, “So Sad,” which turned out to be a fakeout.

After a move-out, lots of empty-nesting parents become even more affectionate towards their pets. Amy and Randy made sure to pose with their two dogs, Marley and Buck, who are now officially their “favorite” children.

Haley, Amy, and Randy never expected the photos to get much attention. But since Haley posted them to her photography business Facebook page, they’ve gone massively viral. “[My parents] still can’t believe this has happened or that it is STILL continuing to be shared,” Haley said. “It’s so strange to see their faces in the news.”

“I just started my business in January of this year. I wasn’t big at all. My page only had 286 likes the day I posted those pictures and now I have almost 15,000,” she told People.

“I have booked tons of shoots and I’ve talked to so many people about potential business,” she adds. “I’m super grateful — I have my parents to thank!”

As a “moving out” gift, you can’t do much better than that.

Of course, as with anything on the Internet, some of the attention has been negative. A few viewers thought Amy and Randy were a little too cheerful, not appropriately “sad” enough, and that they don’t love their daughter enough.

Which is nonsense. Anyone can clearly see that the photoshoot is in good fun.

For her part, Haley brushes off the criticism. “My mother insisted she was staying with me the first night, and she did,” she said. “See, she does love me. They just don’t get our humor!” 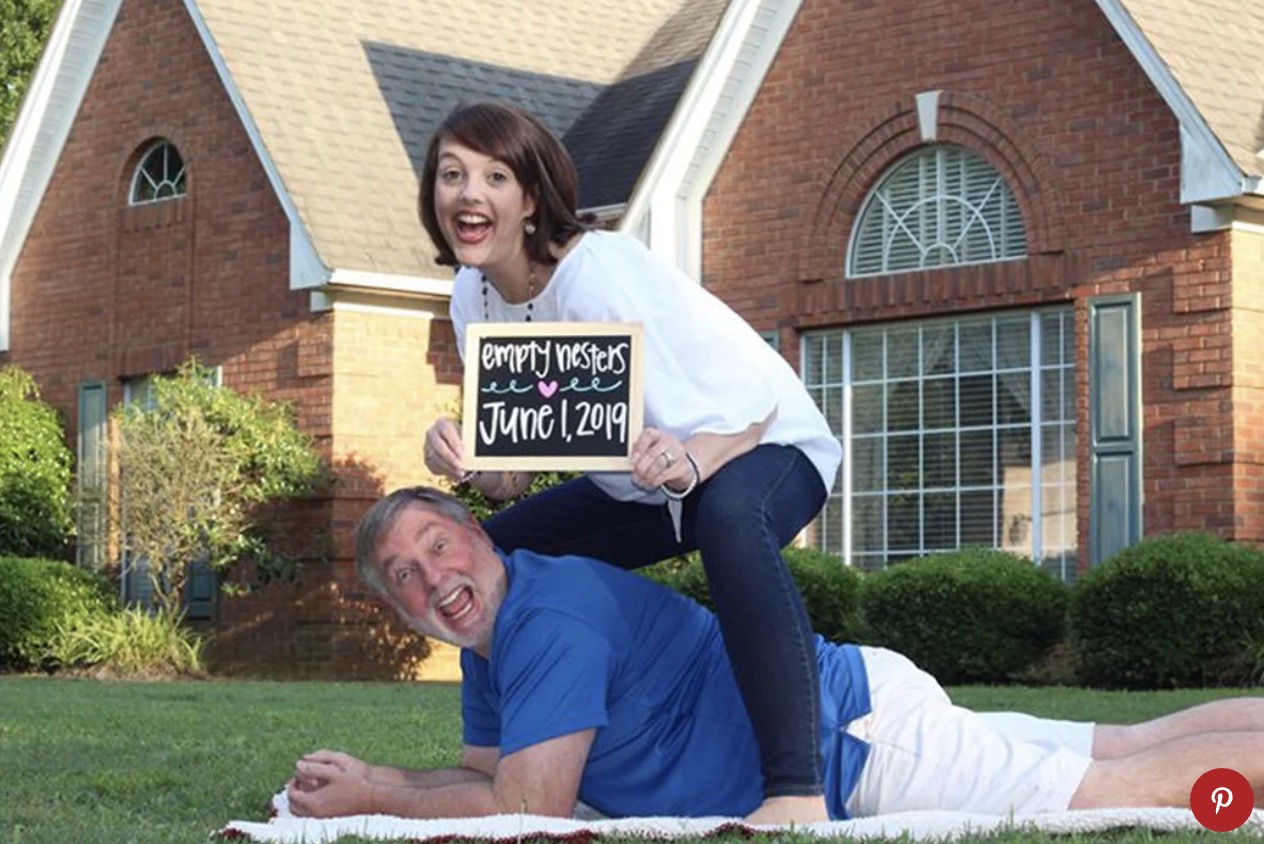 It looks like Haley, Amy and Randy are all adjusting to their new normal, and it definitely looks like Haley’s business is off to a good start. But if she ends up like 50% of her fellow millennials and moves back in with her parents, all the more reason for another photoshoot.