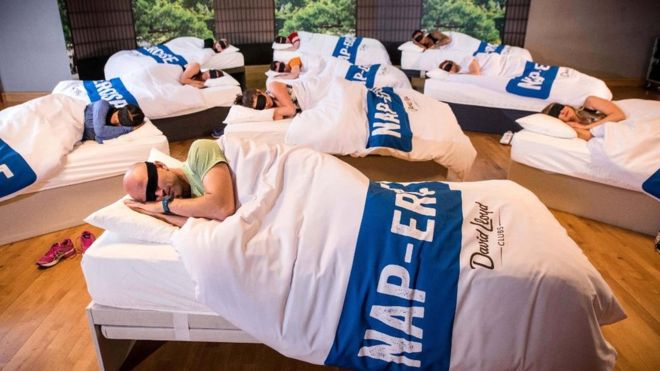 New Gym Class Lets You Work Out By Sleeping

The fitness industry is constantly churning out new exercise fads, taking practically any physical activity and turning it into a workout. Ever tried Laughtercise? Well, it looks like the process has reached its logical conclusion: a class where you work out by sleeping.

This weekend, David Lloyd health clubs, a British chain, is introducing a new class called “Napercise.” It’s exactly what it sounds like: the classroom is full of beds, and participants sleep for 45 minutes, helped along by soothing nature sounds. After that, they do some light stretching.

Pictured: a group of Napercisers feeling the burn.

The logic behind Napercise actually sounds pretty solid. Sleep is essential to physical and mental wellbeing, says Kathryn Pinkham, a researcher who helped David Lloyd design the program. That’s why the class is primarily marketed to the most notoriously sleep-deprived: parents with young children.

And, for an added bonus, the rooms will be kept at low “calorie-burning” temperatures.

Pictured: a group of Napercisers coming down off a grueling workout.

Lots of people are already excited about the program. But any revolutionary idea always has its naysayers and Napercise is no exception. Twitter user @omutts characterized Napercise as paying for the fantasy that you’re actually working out. Another user, @Ullcity, wondered why you couldn’t just nap at home for free?

For now the class is only available at David Lloyd’s Sidcup, Kent location, but if this weekend’s test run goes well, the company plans to expand the program. It could very well become the next Tae Bo or anti-gravity yoga.

If you ask me, Napercise sounds great, but I think you could go one step further. Why not have a class where you losing weight by having nightmares? With all those terror-induced cold sweats, you’d drop a ton of water weight.