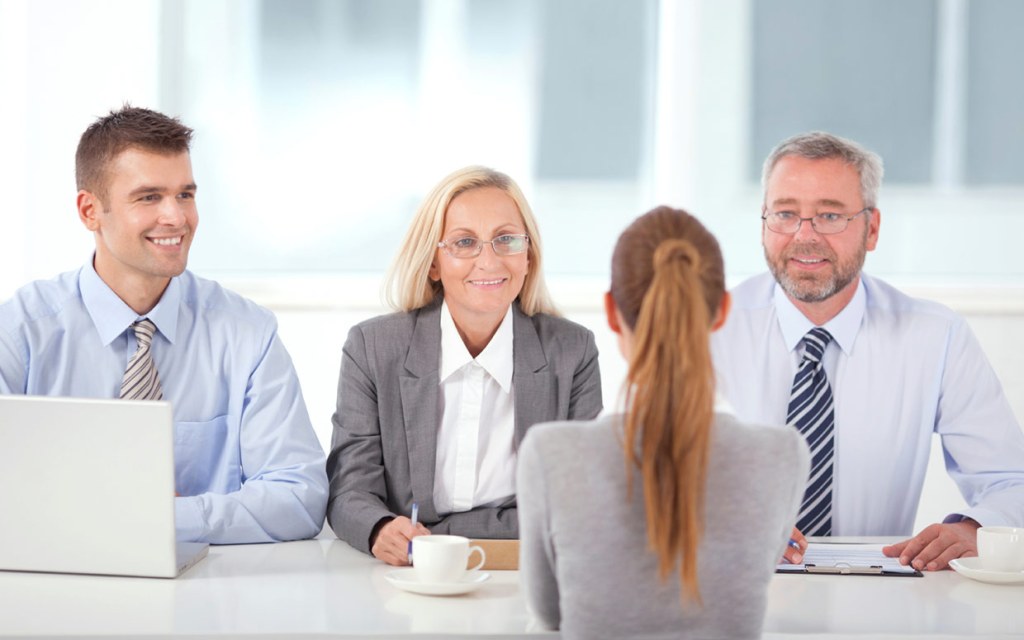 Sometimes during a job interview, you just know it’s a bad fit. I remember one interview I had where I was certain it would be a bad idea to take the job. I accepted it anyway, and I was right…the job sucked. Money is a harsh mistress…

These 20 folks from AskReddit recall the exact moment when they knew the job they were interviewing for would be a no-go.

I had the worst interview ever. It was a husband and wife duo furniture design company. She said as the front desk person/ designer I would have to “keep track and take care of her husband.” This was before the husband interview portion where he asked me questions like: are you married and do you have children? Are you healthy? We don’t want people with kids because they always have issues and we don’t have health insurance. Then he offers me 20k. I have a masters degree.

Me: “What are your actual hours? Like, if I looked at your employee sign in/sign out book, what would I see?”

Employer: “Well, um…we work hard, but we try to be reasonable, and…”

Employer: “We also have an office-wide conference call every Wednesday night at 9PM with our main office in…”

She asked me who I voted for. “Isn’t that illegal?” “You tell me and you’ll start tomorrow” I just left after that comment.

She told me that the team i would be working with had a lot of interpersonal issues to the point where they couldn’t fill out their own schedule without someone from HR mediating. Later on in the interview I asked her why she liked working there, which prompted a long awkward silence followed by a half-assed response.

Was being interviewed by a large west coast search engine company several years ago. One of the interviewers noticed I had a thick southern accent and asked where I was from. I said Kentucky, and he asked me if it was true that a lot of people from there marry their cousins and if anyone in my family had done that. He was dead serious and wouldn’t move on until I answered. I said no, and he looked at me like he didn’t believe me. Super awkward.

In the next interview (that guys boss) he asked how my other interviews had gone so I mentioned the remark, and he seemed very put off that I brought it up. Interview went really cold after that. Got a call from them a week later and said I wouldn’t be offered a job. A month later they called me back and asked if I was still interested and I declined.

I forget the actual wording, but he said something about how everyone who worked there hated him and was out to get him, and he wanted to make sure I would take his side.

Interview for a transcriptionist job, me with 20 years experience, I had just moved to a new town. Older lady gives me the test tape and says it’s timed, and I shouldn’t feel bad if I can’t finish it all in an hour. I type up the five very short and medically easy reports in about 15 minutes, that includes proofreading them and checking to make sure that was all of them (?) I tell her I’m finished and she’s all flustered ‘already?’ and goes and has a confab with another older woman. They acted like I must have cheated somehow and I leave, never hear back.

Got a call from them six months later (I would have starved to death by then) asking if I was still interested. Nope. Interviewed at Kaiser Permanente for the same kind of job, was hired immediately at top wage based on my experience, not ‘starting’ wage like most places do it. KP is a good place to work in my honest opinion.

“We don’t force you to do overtime, but we encourage it. I was here at midnight on new years eve”

This was for a web developer position and he actually looked smug about it, like this was a no brainer. I mean, it was, but not in the way he thought.

Applied for a second part time job to pick up some extra hours. Was told in the interview that I would have to quit my first job (completely unrelated area and both are part of the local university) because it was a “conflict of interest”. My primary job is management in charge of 350 people. Made that choice pretty damn easy for me.

Interviewing at Freebirds (restaurant) I was asked, “We believe there’s a lot behind a name. Do you know where the name Led Zeppelin comes from?” Well, I’m a big fan of rock music, “Sure, it’s named ironically, because a zeppelin is a flying machine, but a ‘lead’ zeppelin wouldn’t take flight-”

Supervisor: “Actually, Led Zeppelin was named after the gym teacher of the founding members. He didn’t believe in them, and they knew they were going to be a success. Not only that, but this restaurant is named after one of their songs.”

Supervisor: “No. And I really recommend you do your research to get to know the company if we do end up offering you a position.”

Applied at a local hotel while in college. Was advertised as “checking people in, cash handling, computer experience needed, etc.”

I’m made to wait over an hour after scheduled interview time then the manager tells me that I will be working completely alone in the hotel with no help. I will be required to do front desk, food prep, housekeeping, etc. All while making $8 an hour.

I interviewed at two different hotels before I moved to the city I live in now. One is the hotel where I now work, but the other was a smaller place that was part of the chain where I had been the AGM of a property two hours away. At the smaller place, they seemed really excited to have me, but once the interview was wrapping up, things took a downhill slide.

I ended up sitting through the interview before being told they couldn’t honor the pay I was promised, they didn’t have the management position I was applying for, but they wanted me around anyway to do the manager’s job for less pay (literally told me, “The GM is very overworked and would appreciate the help”). I would be split between three different properties, would be paid and treated like a front desk clerk, but would be expected to do much more.

Took a job on a different team at the same company instead.

During a phone interview, I asked the potential manager about work life balance. He started out by telling me that his team worked reasonable hours, which gradually turned into a rant about how his team never brought their laptops home at night and didn’t reply to email after 7pm, despite him having multiple “discussions” with them about “being more reachable”.

During the same conversation, he mentioned that the company had grown so fast that there had been a lot of battlefield promotions that put some less-than-qualified people in management, but that it had slowed down a lot recently. So… It’s hard to get promoted AND a lot of managers are unqualified?

I was applying for an unpaid internship as part of my master’s degree. The interviewer showed up 30 minutes late to the interview with no explanation other than “I lost track of time.” I’m not going to work for you for free if you’re going to treat me like crap.

Went to interview for a job as a summer day camp counselor at a community center. I had worked in multiple other positions and was excited to work closer to home.

They made me wait twenty minutes past my appointment time, first. Not a deal breaker.

Second, the man who was interviewing me/would’ve been my boss came to get me and didn’t apologize, but instead began to complain immediately and very fast about his co-worker who had messed up that day somehow.

Third, when I was in the interview, it was clear that he was not listening to me and was impatiently checking his watch while I was giving answers. This made me feel like I needed to cut my answers short because he was so hurried.

Last, when I left, he didn’t shake my hand and didn’t get my name right. It was embarrassing for me to watch. Painfully terrible experience.

Literally left saying, “If they offer me the job, I’m turning it down.”

The employer asked me if I was comfortable confronting thieves, or taking things out of people’s hands and pockets if they tried to steal. It was a high theft store in a bad part of town. She wanted me to work night shifts alone while I did this. I’m a 5’3, 130 pound unathletic girl. I’m not getting my butt kicked for a bag of chips.

I work at another store in the same chain now. I found out that this is completely against company policy, and recently had a meeting about someone who was shot and killed for trying to chase a thief.

Pulled me into a back room, told me a filthy joke (and I’m no prude) out of the blue, and then said he thought I’d understand because ‘I wasn’t like those other women’. This from the area’s most prominent eye surgeon.

Interviewed for an IT job at GameStop. I thought hey, I’m a gamer. I bet there’s a lot of gamers working here, it could be a really cool place to work.

Then the guy interviewing me mentioned that they had just removed all of the cubical walls, and then asked me if I could work well under pressure, because every time something broke, I’d have 3-4 VPs physically standing behind me watching while I tried to fix it.

I nope’d right on out of there.

The employer was a publisher. First they told me about the job, which was basically the entire duties of a graphic artist plus the entire duties of a web programmer put together, and honestly, at the time there were undoubtedly only a handful of people (including myself) who could do the job in the first place.

Then they told me how marvelous the company was going, with X billion dollars of profit in the last year, and how this meant I’d have a bright future there with lots of stability.

I gave some thought to what they were asking me to do, what I was already earning (being just a web programmer without the graphic art duties), and what I’d want to earn for that job. I decided that I wouldn’t consider it without a $30,000 raise.

We got around to the discussion of what they were willing to pay for the position, and the number they mentioned was a $5,000 pay cut from what I was already earning. I explained that this was, frankly, insulting, and that they had no business wasting the time of the best people in the industry with interviewing for such a ridiculous salary.

They told me that they’re the publishing industry, and publishers traditionally pay less than other employers for the same job. I asked why. They said it was because publishing is a low profit margin industry.

So I pointed out that they had some nerve to try to claim poverty to me after their little lecture about how many billion dollars of profit they’d made last year. Then I stood up and walked out. No way in hell was I ever going to work for that employer.