Need An Xmas Gift For The Hipster In Your Life? Try This Nativity Set

The Christmas season has officially begun! For lots of people, their favorite part of Christmas is the traditions. From baking cookies to trimming the tree to hanging the stockings, these yearly rituals are what the holiday is about. Nothing else can get you in a festive mood quite like doing the exact same things you did as a child.

But traditions can have a downside. Sure, they’re familiar, but they can also be a bit stale. Once you’ve read The Night Before Christmas 30+ times, the charm begins to wear off.

If your traditions are feeling tired, it might be time to update them. And that’s why someone decided to make a Hipster Nativity Set. Ever wonder what would happen if Jesus were born in Silverlake instead of Bethlehem?  Now you know! 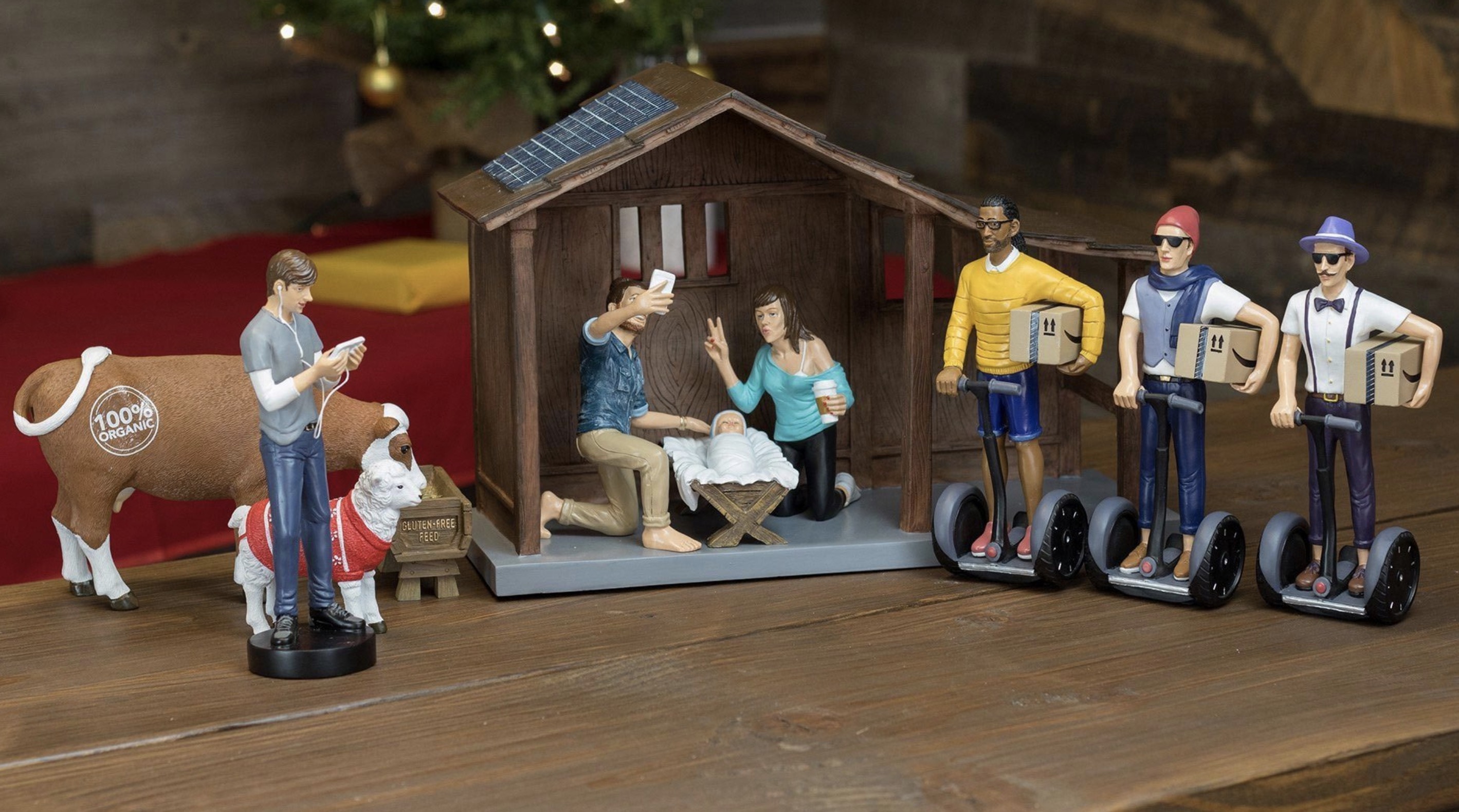 The set is produced by Gorilla Goodies, a San Diego-based gift company that makes knick knacks for millennials. The set includes a manger, seven human figurines–all standing 7′ tall, except for baby Jesus–and a couple animals, and right now it’s on sale for $59.95.

The set itself is fun, but what really makes it hipsteriffic is the details–and there are a lot of them.

First, there’s the stable itself, which is powered by a solar panel. Hipsters are nothing if not eco-conscious. They’ll use solar panels even when there’s no need for them! 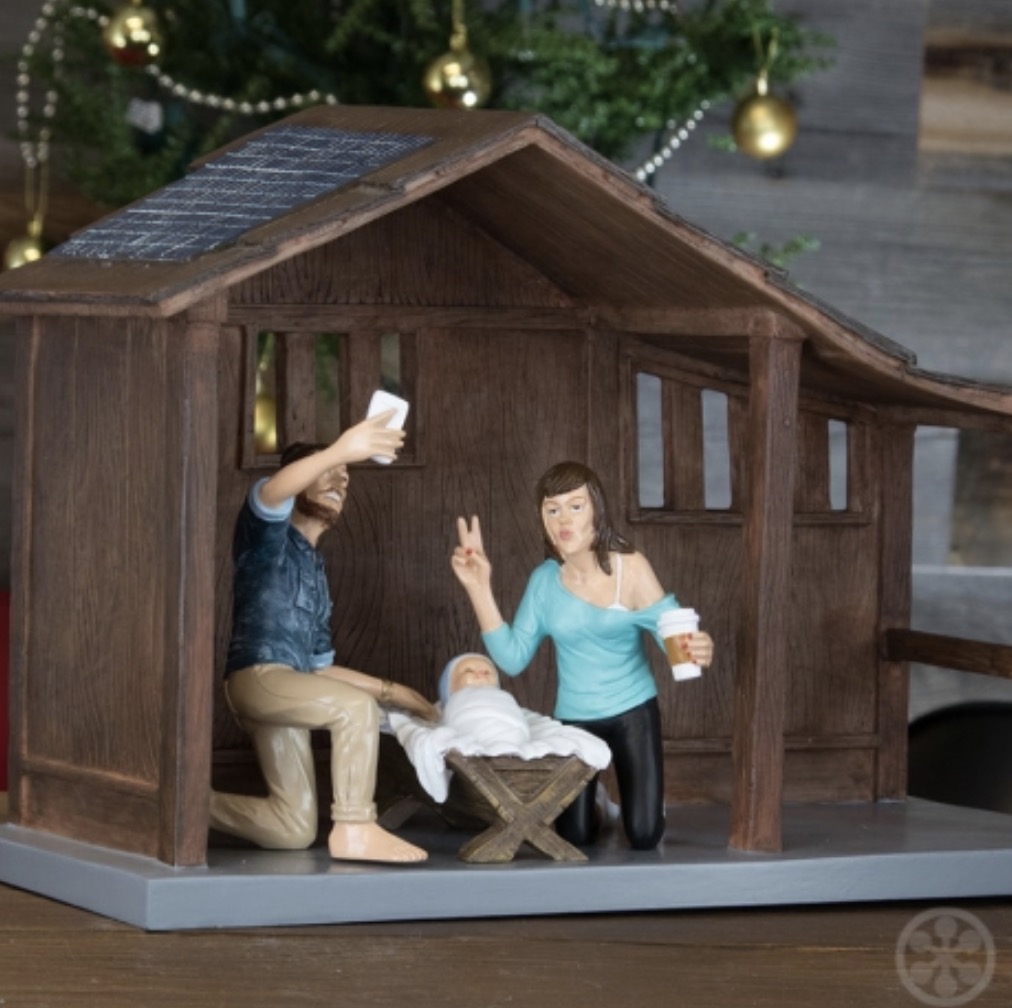 You can’t have a nativity scene without Joseph, Mary, and the baby Jesus. Hipster Joseph is dressed like a J. Crew mannequin and taking a selfie. Mary is wearing yoga clothes, enjoying an overpriced coffee, and making a duck face. Those are really less hipster-y stereotypes than just generic millennial stereotypes. Maybe they were too busy having the baby to get fully decked out in hipster gear.

Speaking of the baby, little Jesus is right there in the manger. He’s got a blue bonnet but otherwise nothing that says “hipster.” They couldn’t give him a Daft Punk onesie? Or a bottle filled with vegan formula? 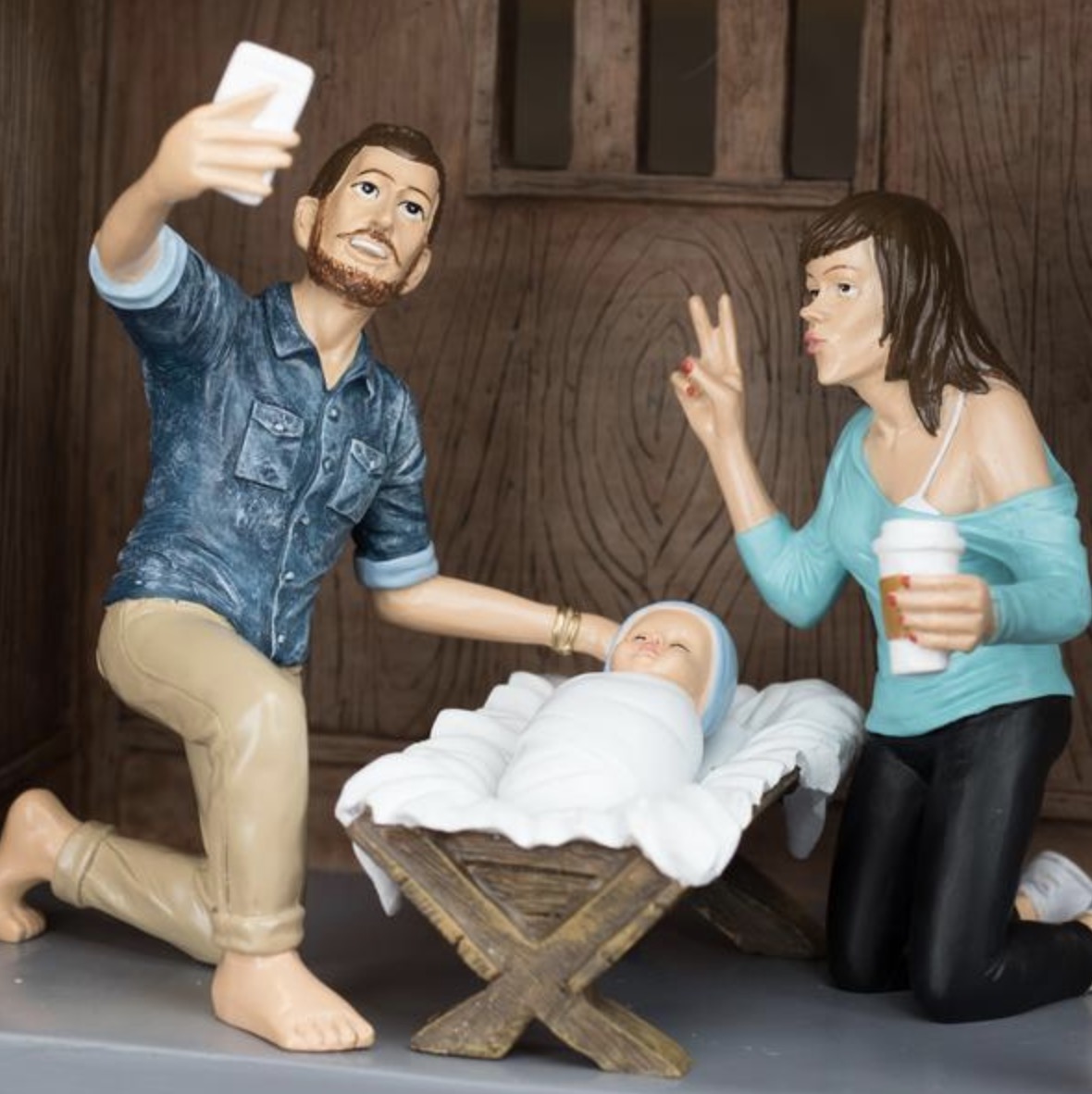 The Three Wise Men are where the set really shines. Here’s where we find many of the classic hipster stereotypes. Skinny jeans. Suspenders. A vest-scarf ensemble. A waxed mustache. Black-framed eyeglasses. A bowtie. And of course, a fedora.

They’re also riding Segways, which, honestly feels more “early aughts” than 2018 hipster. I feel like hoverboards would have been a better fit, but I’m quibbling.

Instead of the classic frankincense, gold, and myrrh, they’ve got packages from Amazon Prime. Are hipsters associated with Amazon Prime? I’ve never heard that. Why not three different gifts, like avocado toast, a fixed-wheel bike, and a case of PBR? But again, I quibble. 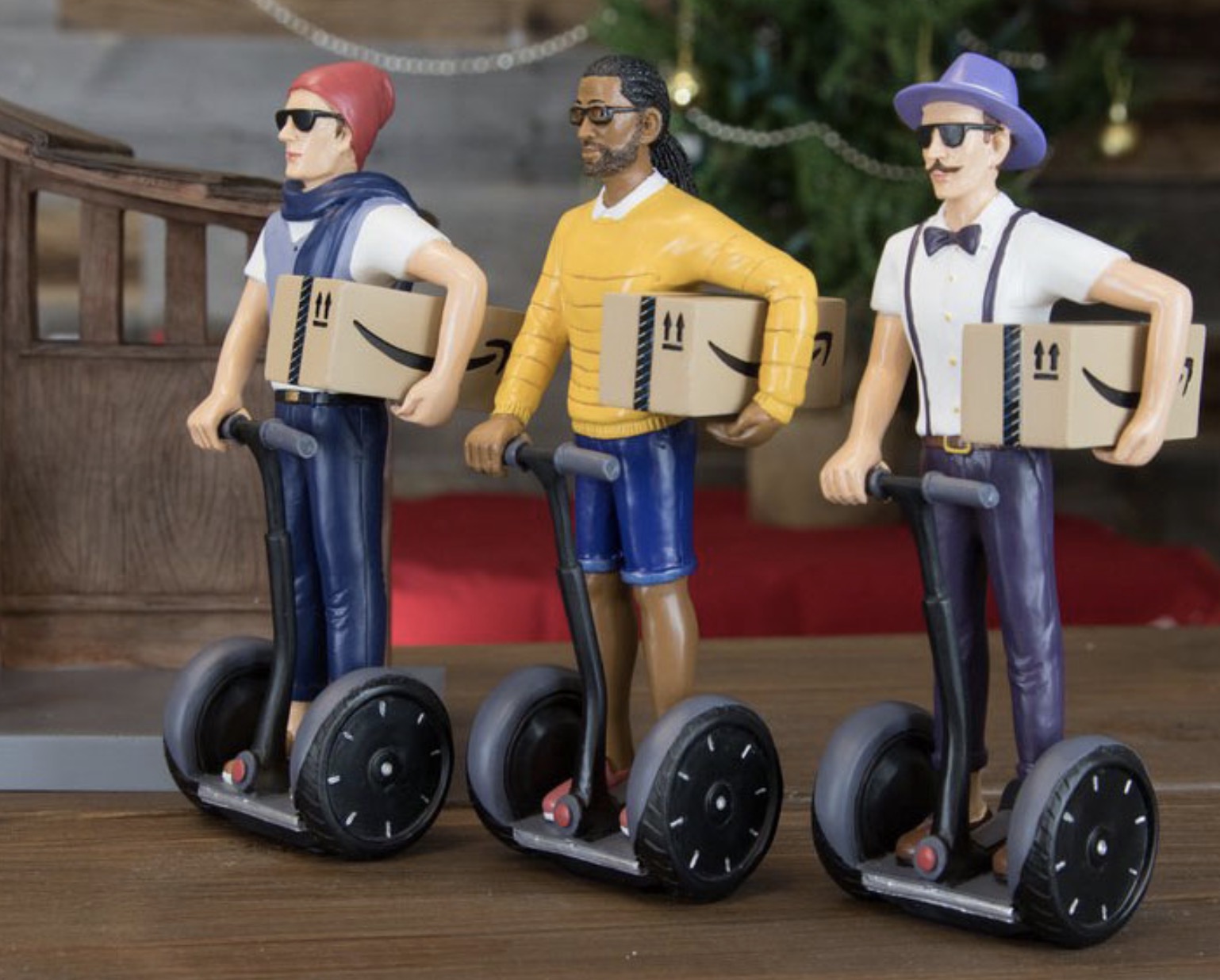 Your traditional nativity scene also includes livestock–if you remember your Sunday School lessons, there was no room at the inn, forcing Mary and Joseph to sleep in the stable.

This nativity scene has animals too. There’s a cow labeled 100% organic, naturally, and eating from a trough of gluten-free feed. There’s also a sheep wearing a festive Christmas sweater…possibly made from the sheep’s very own wool! 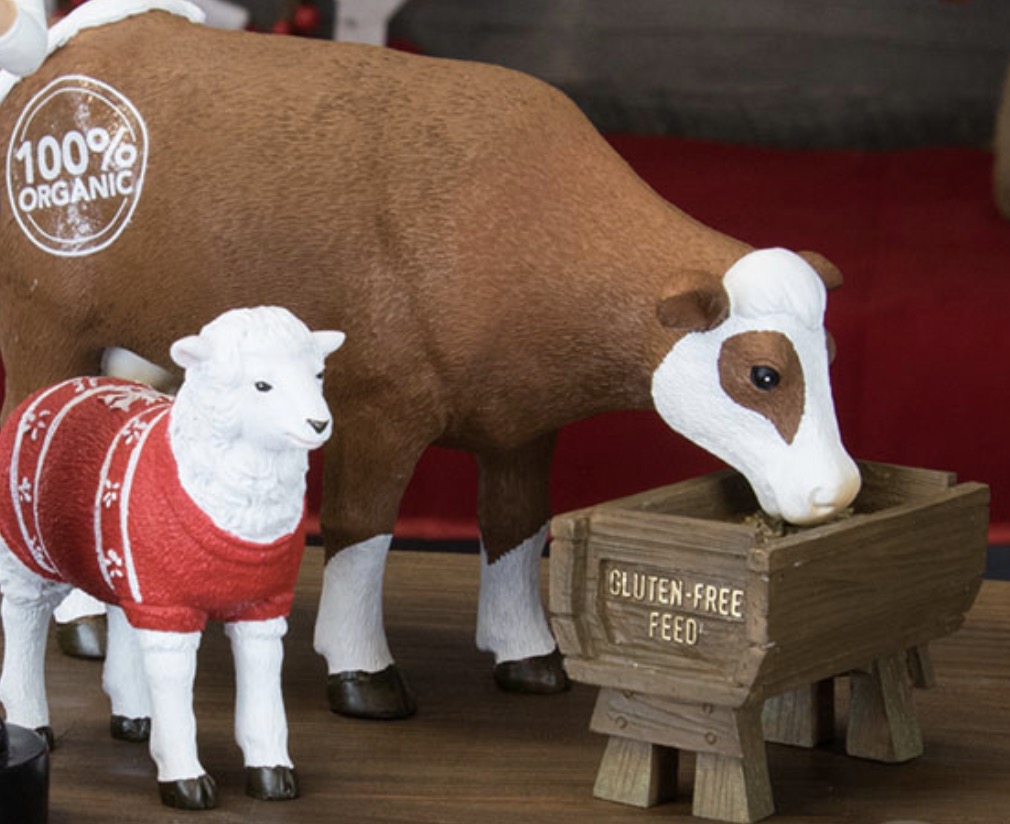 And then there’s this guy. Most old school nativity scenes have a few other folks hanging around the manger, hoping for a glimpse at the baby messiah. Usually they’re shepherds or angels. This is just a man engrossed in his tablet device, with a pair of earbuds. But sure! 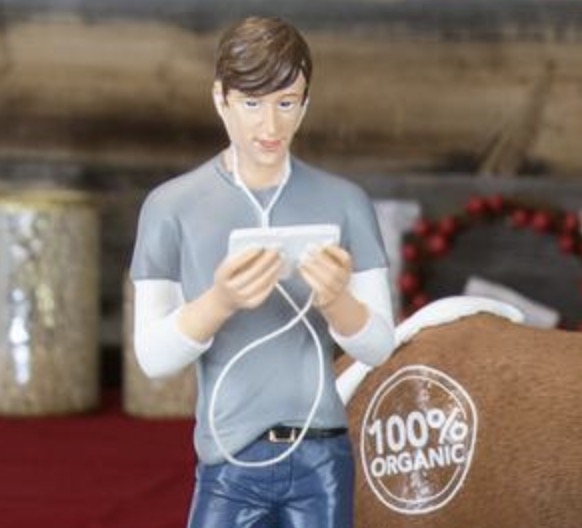 Make sure you pick up your Hipster Nativity Set soon, before everyone else gets theirs and it becomes lame.

And have a meh-rry Christmas!

This Company Makes Slippers That Look Exactly like Your Pets
15 Times Gordon Ramsay Savagely Roasted Amateur Chefs On Twitter
Enjoy These Memes About Your Summer Vacation
The Science Behind Your Poop; And What It Says About Your Body
20 Awesome Acts of Vandalism
15 “Beware Of Cat” Signs That Are More Funny Than Menacing