We live in a time when scientific progress is constantly being made–breakthroughs happen so often that it’s easy to take them for granted. In our young century alone, scientists have proven the existence of water on Mars, they’ve performed the first face transplant, and they’ve detected gravitational waves, which could make time travel possible. And that’s just three of countless examples.

No matter how much science accomplishes, there are some people who stubbornly cling to beliefs that are just flat-out wrong–like the Flat Earth Theory. We’ve previously covered Flat Earth Theory before, so we won’t rehash it much here. All we’ll say is that even though the Earth is a sphere, and that humanity has known this for a fact since at least the days of ancient Greece, some people still think it’s flat. According to one study, 16% of them do!

Basically, what it sounds like: Earth is round and flat with a big hole in the middle. The north and south poles are on the inside of the donut, and the equator is on the outside.

To be fair, these people are impressive in their own way. It’s not easy to look dumber than people who think our planet looks like a big pancake, but by golly, Donut Earthers did it! 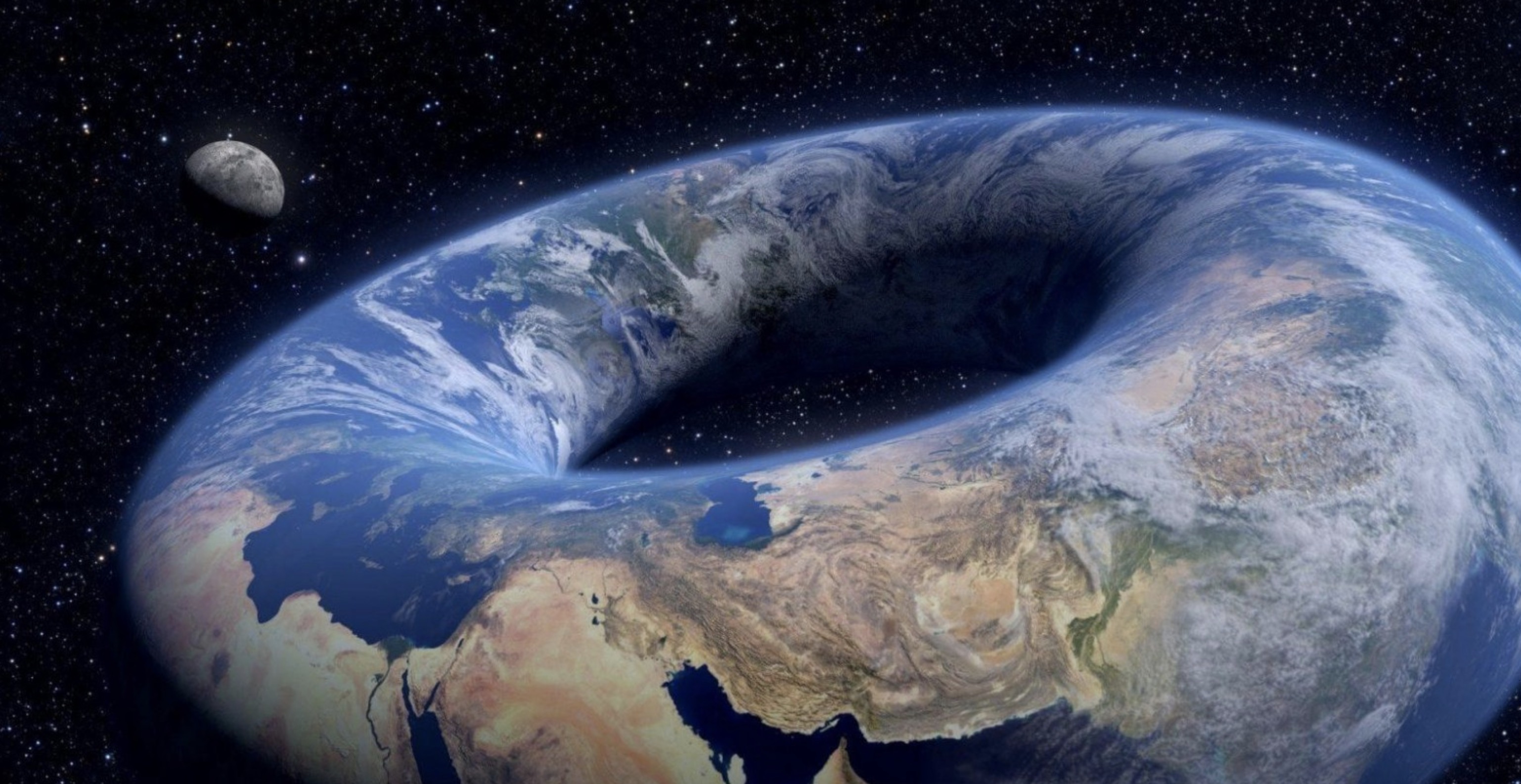 Maybe the best part of Donut Earth theory is how it started. The folks over at Vice did a great job of getting to the bottom of it, and it all starts with the forums on FlatEarthSociety.org, an organization that promotes Flat Earth beliefs. Way back in 2008, a forum member named “Dr. Rosenpenis” first floated the donut theory, apparently as a joke.

But then, somehow, another user named Varaug picked up the theory up in 2012 and expanded on it. This Varaug character proposed the theory that Earth is “torus” shaped–basically a fancy scientific word for “donut.”

Varaug hosted a Q&A on the forum, inviting users to poke holes in his theory. They did, but he had answers.

‘If Earth has a giant hole in the center, why can’t we see it?’ one asked.

Because ‘Light bends and follows the curvature of the torus, making the hole ‘unseeable,’ Varaug answered.

Another forum user wanted to know, if Earth is shaped like a giant Krispy Kreme, how does it rotate? How come we have a day and night cycle.

Varaug was ready with an analogy: turn on a flashlight and put it on a table. This is the sun. Then place a donut on the table on its side, with the donut hole perpendicular to the flashlight. The lit-up side is the daytime side, etc.

“Over 24 hours, the donut performs one complete revolution,’ Varaug wrote. “Spin it half way around, this signifies the passing of 12 hours.”

Go ahead and mop up the gray matter that just leaked out of your nose. I’ll wait.

After Varaug’s dissertation, Donut Earth theory kept popping up every now and then, just like herpes. By 2016 it had made it to Youtube,  where more-would be scientists further elaborated on Donut Earth and how it works. Here’s a video where a robot explains that the Bermuda Triangle is really caused by ships falling through the hole in the center of Donut Earth. Here’s another where a guy shows off his 3D-printed Donut Earth, along with another Earth concept called “Twisted Earth.” 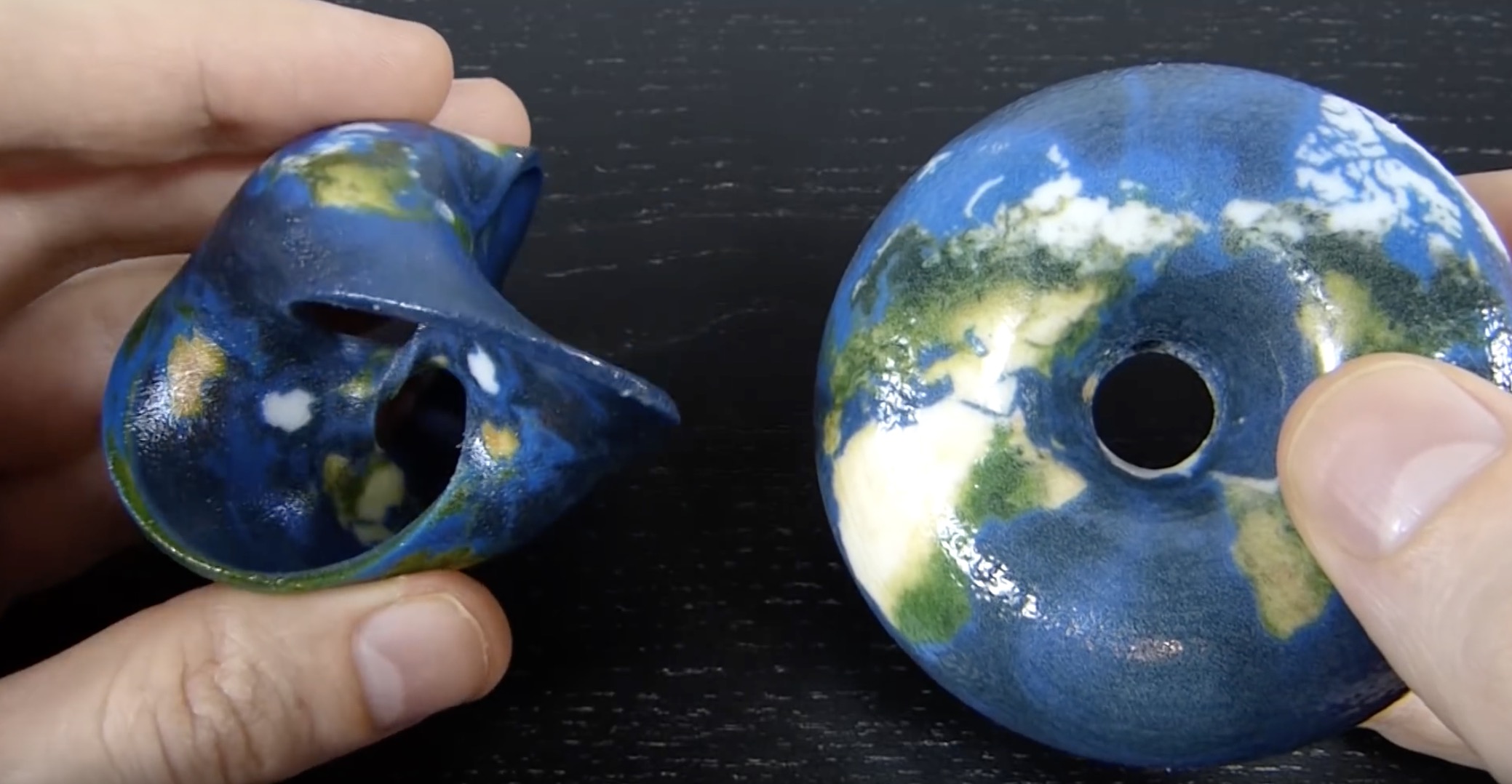 It’s hard to tell which of these people are serious and which are pulling our legs. Probably a combination of both! But enough people are open to the Donut Earth idea that real scientists have been forced to debunk it.

First up, Tabetha Boyajian, who in 2015 helped prove that what people thought was an alien structure in space was really a trick of the light caused by dust clouds.

Dr. Boyajian points out that if Earth really were donut-shaped, it would be completely different than the Earth we know. There would be no sunrises and sunsets like we know them, nor would we have night and day. (Sorry, flashlight analogy.) Sunlight would hit Donut Earth unevenly, causing wild variations in the seasons, and wind so strong it would make the planet almost unlivable.

She also pointed out that, if Earth were donut-shaped, it would create a donut-shaped shadow on the moon during an eclipse. 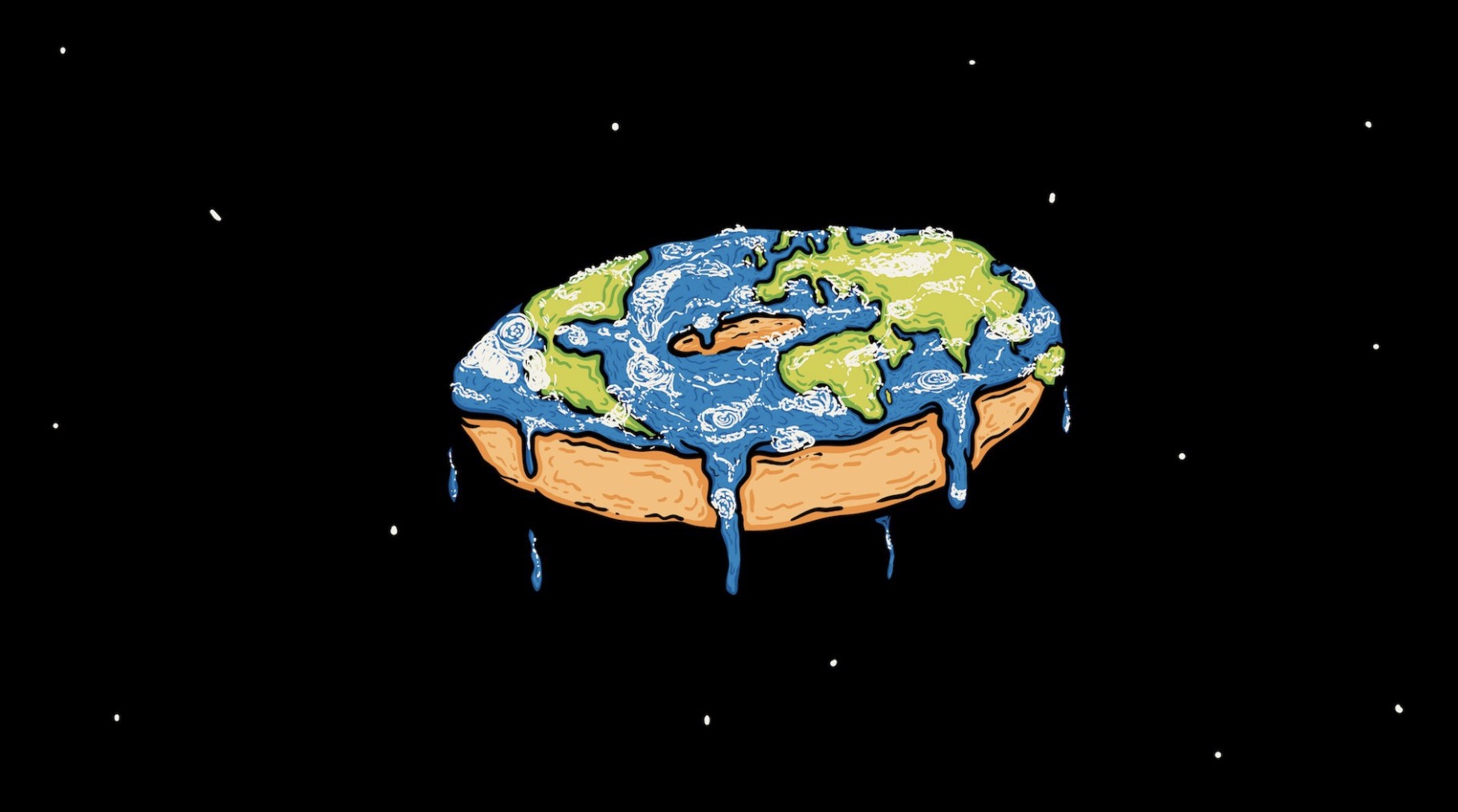 Dr. Anders Sandberg of Oxford published his own takedown of Donut Earth theory over on io9. If you want to go deep into the weeds on astrophysics and gravity you can do so here, but the gist of his argument is that on Earth, gravity is the same strength everywhere. If Earth were donut-shaped, gravity would have to be weaker on the outside of the donut (at the equator) and weaker on the inside, (at the poles.) But since gravity is the same in Antarctica as it is Quito, Ecuador, Earth can’t be a donut. 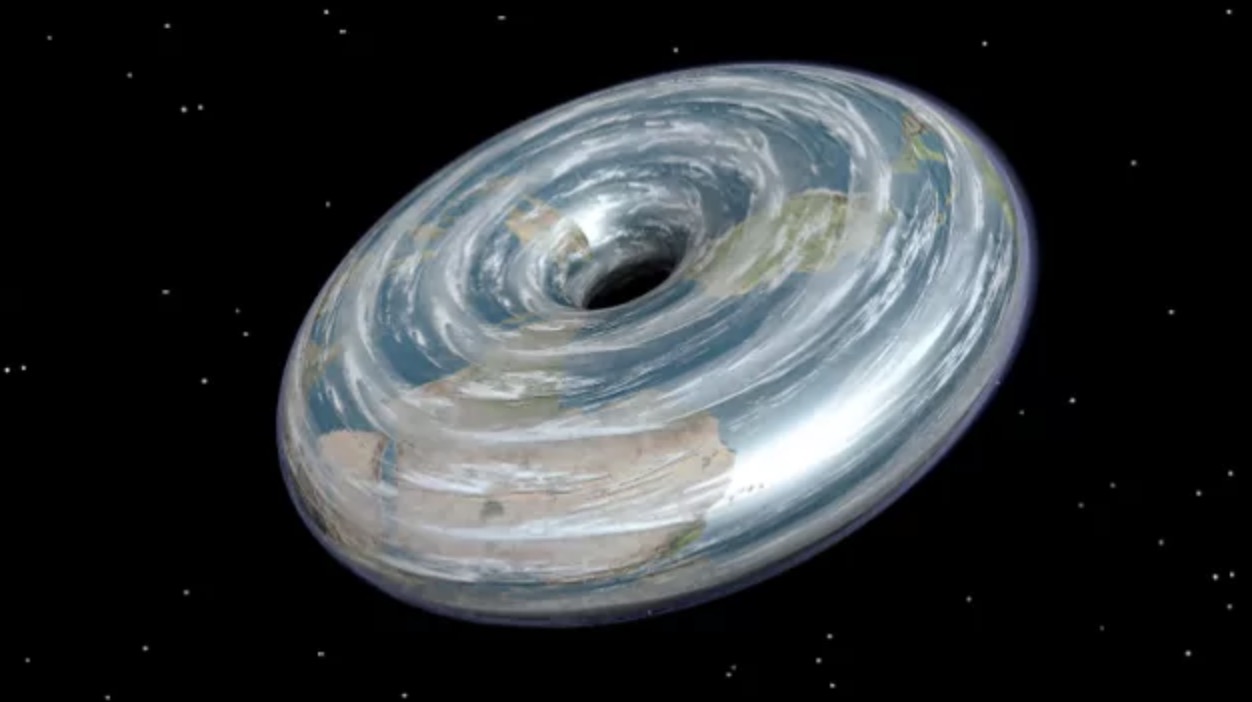 But really, all this debunking is beside the point. Of course the Earth isn’t donut-shaped, and proving it is almost a waste of time. It’s clear to anyone who knows what they’re talking about that Donut Earth Theory is unscientific malarkey.

“Any of those claims is just saying, ‘You know what, I’m going to just come up with a new idea with no motivation for it. Just eight things that can possibly be consistent with it,’” Dr. Boyajian said. “And that’s not how we develop theories.”

You tell ’em, Doc Boyajian. These Donut Earth people need to step aside and make room for legitimate Earth theories–like the existence of the Hot Dog Ring. Unlike Donut Earth, this is totally real, as the graphic below proves: 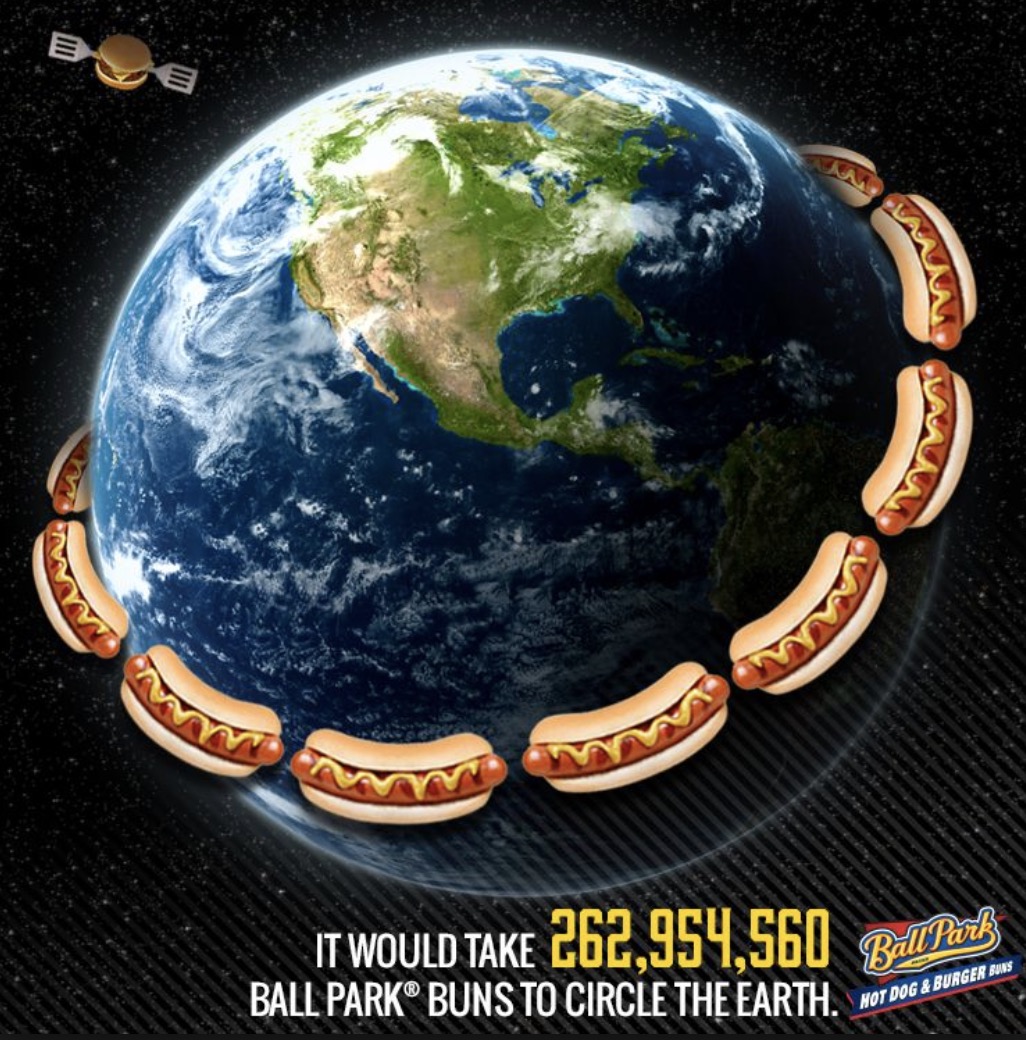