Depending on who you ask, the following story is either an example of a parent going way too far in pursuit of uniqueness, or an example of an airline employee acting with complete unprofessionalism–or, it’s a mix of both. Let’s see what you think!

At the beginning of November, mother Traci Redford and her five-year-old daughter were flying from Orange County’s John Wayne Airport to El Paso, Texas. Redford and her daughter were pre-boarding a Southwest Airlines flight due to her daughter’s epilepsy, like they normally do. And that’s when Redford says the gate agent mocked the little girl’s name, right to their faces.

That name? Abcde. Yes, you read that correctly–it’s just the first five letters of the alphabet, pronounced “ab-city.” 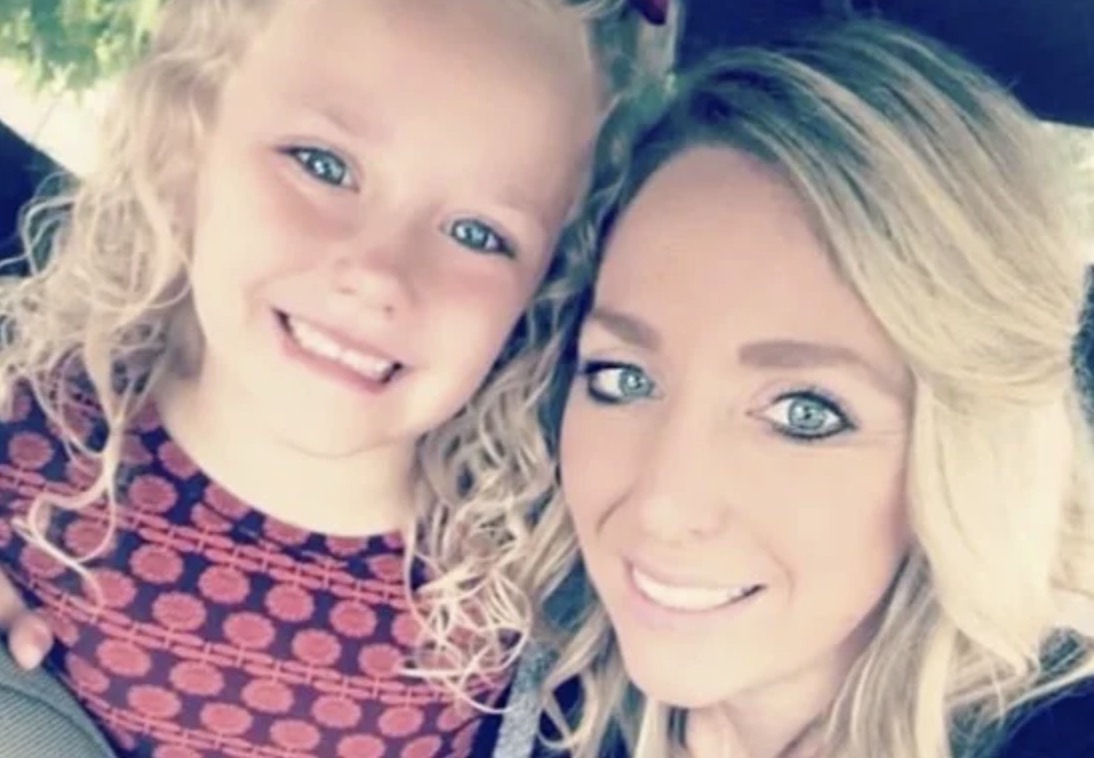 The Southwest employee noticed Abcde’s unusual name on her boarding pass. “The gate agent started laughing, pointing at me and my daughter, talking to other employees. So I turned around and said, ‘Hey if I can hear you, my daughter can hear you, so I’d appreciate if you’d just stop,'” Redford told ABC7 in an interview.

But the mockery didn’t stop there. Redford explained that even after being asked to stop, the employee chose to share Abcde’s boarding pass online.

“While I was sitting there, she took a picture of my boarding pass and chose to post it on social media, mocking my daughter,” Redford said. “It was actually brought to my attention by somebody who had seen it on Facebook and reported it to Southwest Airlines. And after two weeks of doing a formal complaint, Southwest hadn’t done anything.”

Abcde was fully aware she was the butt of the employee’s joke, Redford told reporters. “She said ‘Mom, why is she laughing at my name?’ And I said not everyone is nice and not everyone is going to be nice and it’s unfortunate.'” 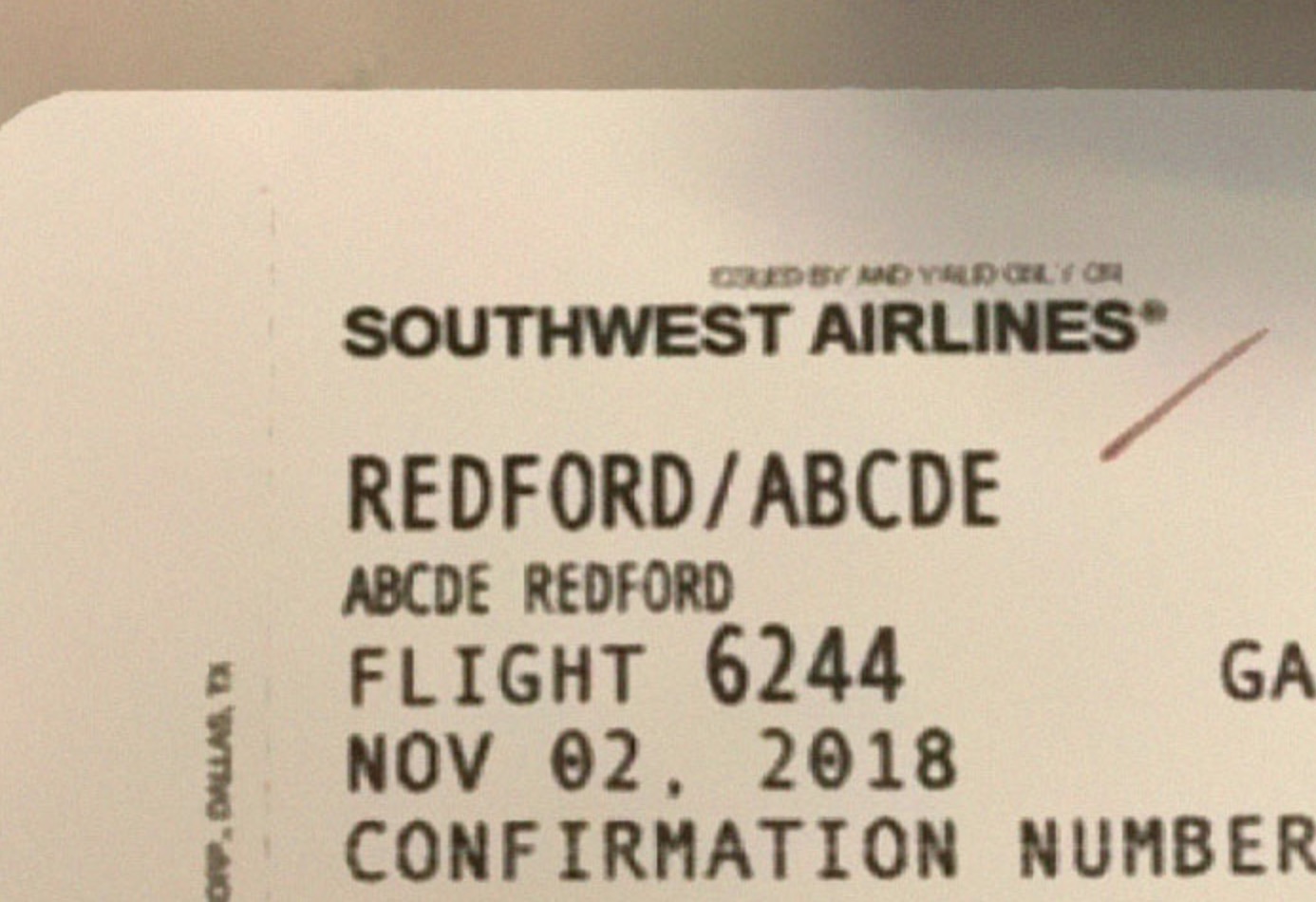 After weeks of attempting to contact Southwest Airlines for a response without success, Redford finally went to Southern California-based ABC 7 news, which reported the incident. This is what finally prompted Southwest to address the problem.

In a statement to ABC7, Southwest said:

“We extend our sincere apology to the family. We take great pride in extending our Southwest Hospitality to all of our Customers, which includes living by the Golden Rule and treating every individual with respect, in person or online. The post is not indicative of the care, respect, and civility we expect from all of our Employees. We have followed up with the Employee involved, and while we do not disclose personnel actions publicly, we are using this as an opportunity to reinforce our policies and emphasize our expectations for all Employees.” 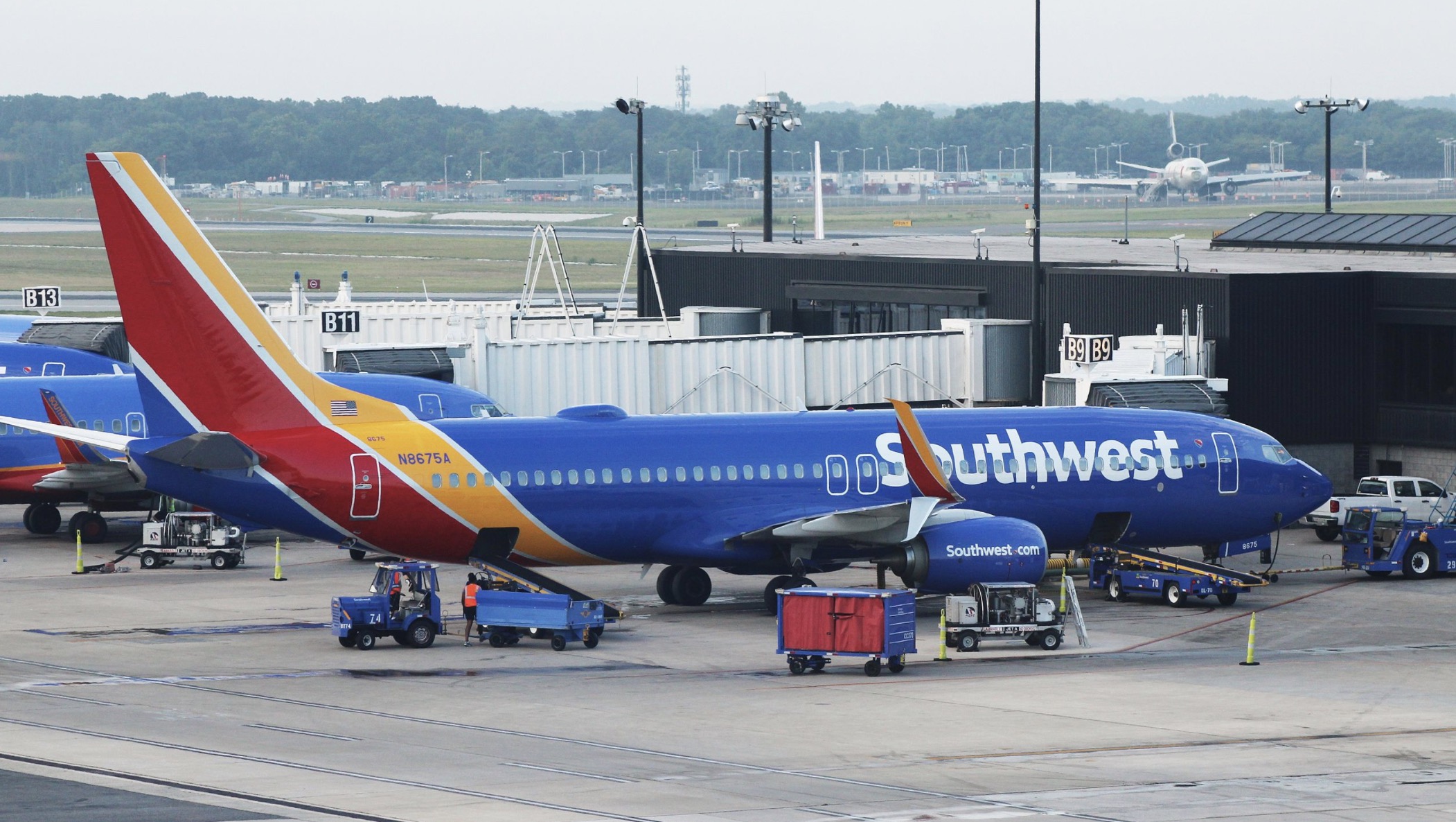 And that would appear to be the end of the story between the Redford family and Southwest–but not for the general public, because the discussion is still ongoing. Lots of people felt that even though Abcde’s name definitely is unusual, the family didn’t deserve to be made fun of. Especially not Abcde herself, who’s just five years old.

Others have pointed out that “Abcde” isn’t actually as unusual a name as you might think it is. The folks over at Vocativ did a deep dive on the history of the name Abcde. Surprisingly, there have been other people with this name before. Hundreds of them, in fact.

According to the Social Security Administration, which maintains a database of baby names in the United States, there have been 328 girls named Abcde since 1990. The phenomenon appears to have started in Hawaii, where all five of the Abcde’s born in 1990 were born. The year that saw the most Abcde’s born was 2009, when 32 baby girls were given the name.

Here’s a handy chart that should answer all the questions about “Abcde” you never knew you had.

That being said, just because a name exists doesn’t mean it’s common. By comparison, according to the Social Security Administration, the most popular girls’ name of the 1990’s was “Jessica,” with 303,086 babies receiving that name. You and I have met plenty of Jessicas. We probably haven’t met even one Abcde.

And on social media, most people just couldn’t get their heads wrapped around Abcde as a name. Lots of people saw it as just another example of a disturbing trend in too-creative names. 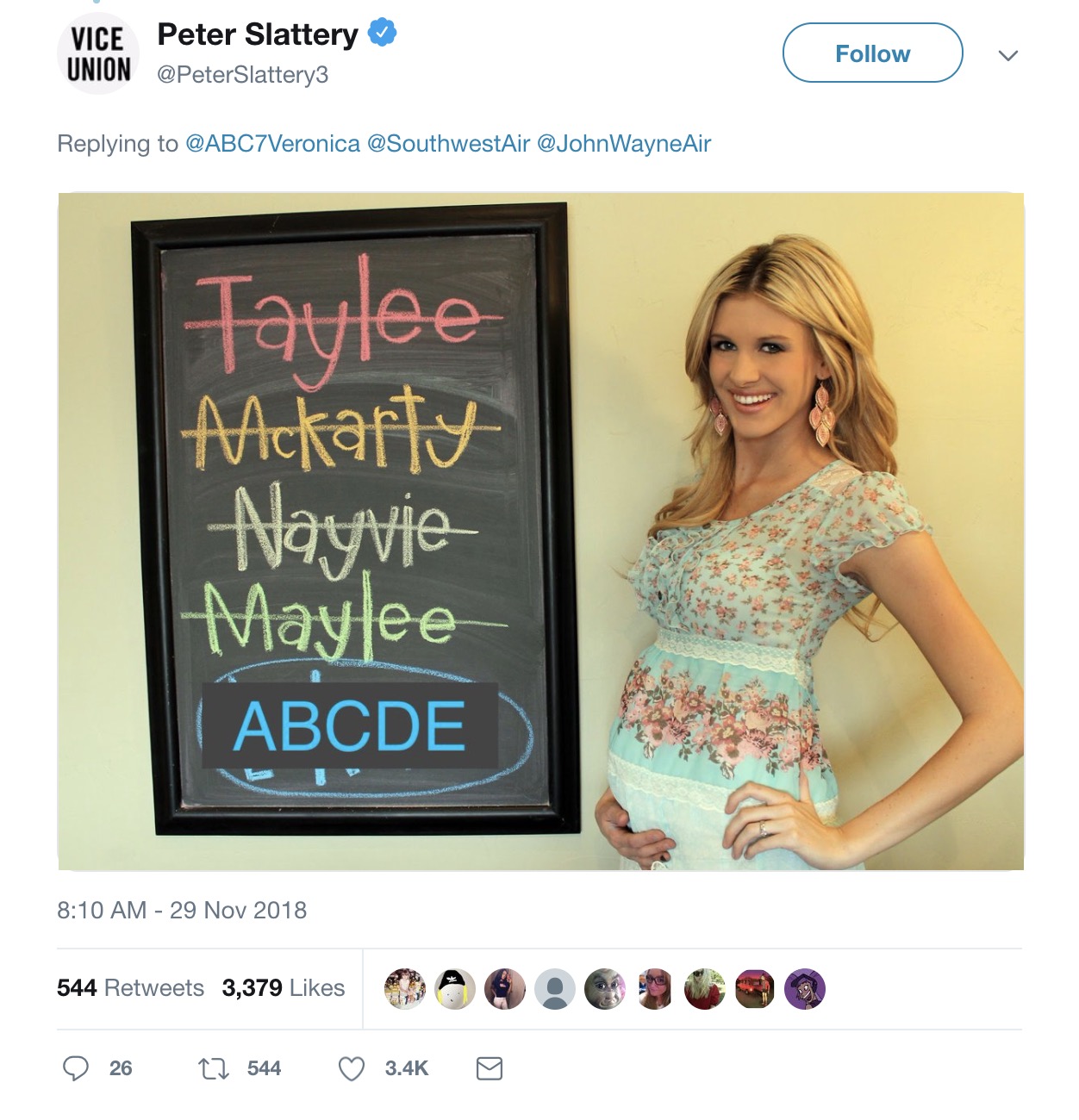 Others just had some fun with it.

On the other hand, plenty of people took issue not with the name itself, but with the mother for giving it to her child. 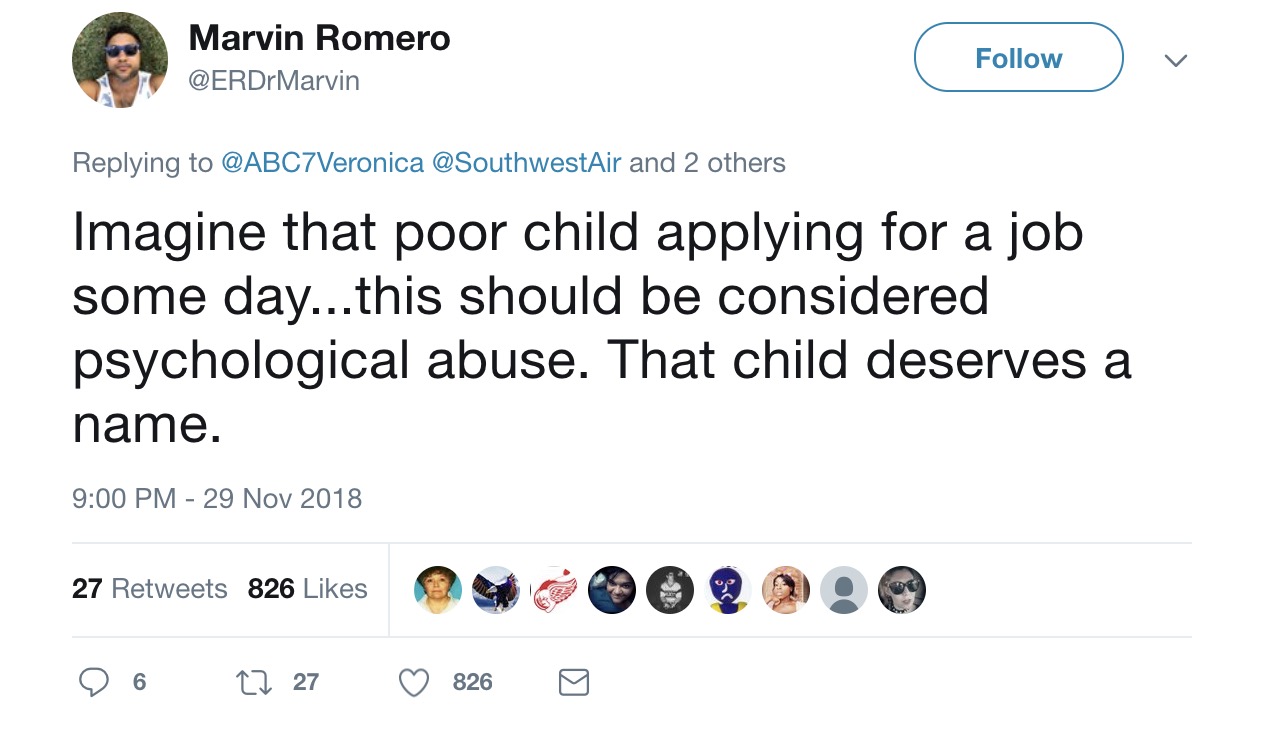 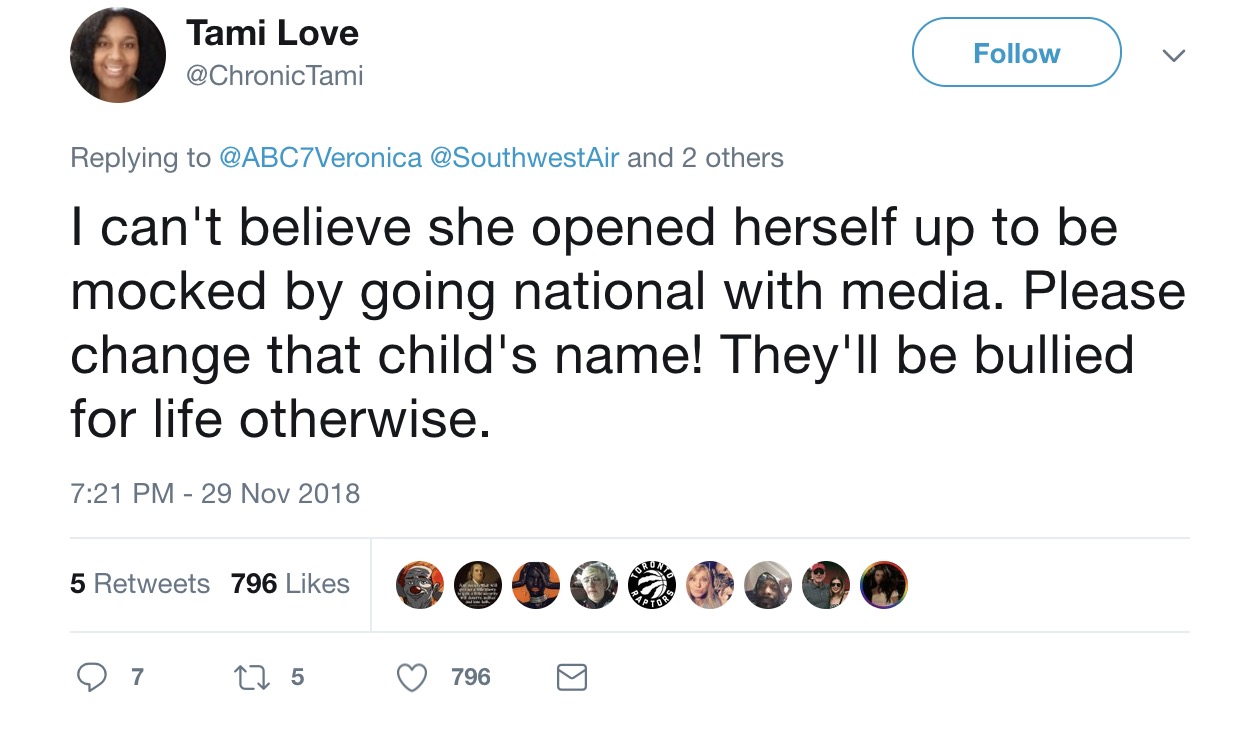 And sure, Abcde is an unusual name, and the girl will definitely face some difficulties because of it–I’d say she already has. But still, no matter how justified you think you are, an adult making fun of a five-year-old to her face isn’t a good look.

If the Redford family decides to sue Southwest Airlines, they would be wise to hire the law firm Fghij, Klmno, Pqrst, & Uvwxyz, Attorneys at Law.

15 Uncomfortable Photos
These ‘Oh You!’ Memes Will Tickle Your Funny Bone
14 Funny Jokes the People of Twitter Have Put Together for Our Viewing Pleasure
15 De-Motivational Posters To De-Inspire You
15 Internet Tough Guys to Hardcore to Mess With
These Are Some of the Weirdest Selfies Ever