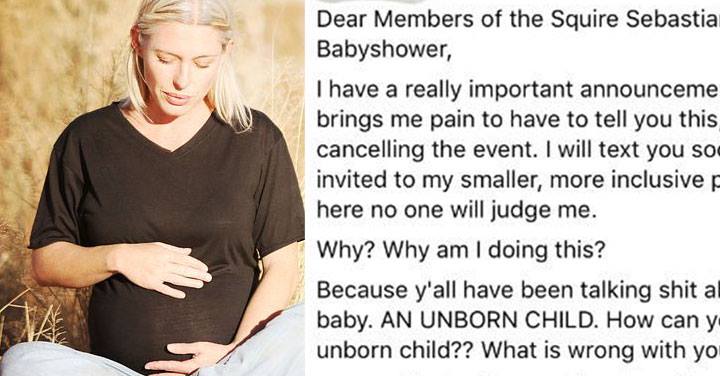 Naming children is a thorny issue. There are lots of names in the world, and lots of people sharing them. Because of that, many parents feel that calling their child “Tom” or “Sarah” is too mundane. They want their child’s name to reflect how special the child is in their eyes, and so they go with something unexpected. And that’s great! Unfortunately, many of these parents take it waaaay too far, and that’s how we end up with children named “Moxie Crimefighter.” (Looking at you, Penn Jillette!)

Look, parents-to-be, if you want to name your child a name nobody else has ever had, go for it. But don’t be surprised when your sweet little Dishwasher Rodeo Skywalker elicits some raised eyebrows. And DEFINITELY don’t be like this soon-t0-be mother, who canceled a baby shower after her friends and family mocked her son’s name.

The mother, whose identity has not been revealed, announced the cancellation in an appropriately batshit Facebook post, which was shared on Reddit to the appropriately named “Insane People Facebook” subreddit. The post is a doozy, the kind of rant that, if you or I saw it on our own Facebook page, we’d screenshot it and save it to look at on days when we need positive affirmation. 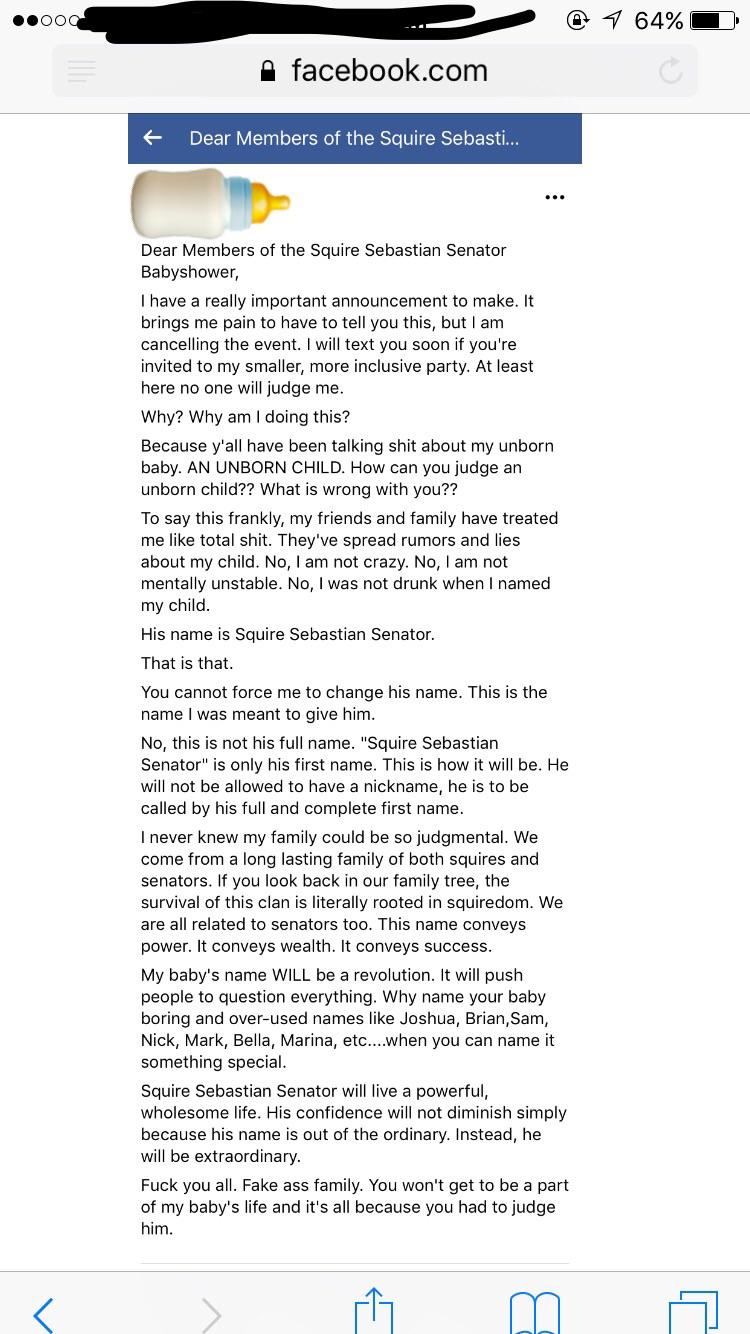 That’s lot to digest, so let’s go over it point by point.

“Dear Members of the Squire Sebastian Senator Babyshower. I have a really important announcement to make. It brings me pain to have to tell you this, but I am cancelling the event. I will text you soon if you’re invited to my smaller, more inclusive party. At least here no one will judge me.

Please keep your expired car seats and dingy hand-me-down onesies to yourself. WE NO LONGER REQUIRE THEM!

Why? Why am I doing this?

Because y’all have been talking s—t about my unborn baby. AN UNBORN CHILD. How can you judge an unborn child?? What is wrong with you??”

OK, pretty sure they weren’t making fun of the baby himself, but the name you gave him, lady. Let’s be real.

To say this frankly, my friends and family have treated me like total s—. They’ve spread rumors and lies about my child. No, I am not crazy. No, I am not mentally unstable. No, I was not drunk when I named my child.

His name is Squire Sebastian Senator.

You cannot force me to change his name.

She is right about that. We don’t know which US state she lives in, but under no state laws is “Squire Sebastian Senator” illegal. Many states ban names that include symbols. Other ban names that contain obscenities or violate copyrights. But that’s about it. You can check out this list of state naming laws if you want more information.

This is that name I was meant to give him.

How do you know that? Did Jiminy Cricket show up and tell you it was OK? Don’t accept name-based advice from someone named “Jiminy.”

“No, that is not his full name.

‘‘Squire Sebastian Senator’ is only his first name. This is how it will be. He will not be allowed to have a nickname, he is to be called by his full and complete first name.”

Yikes, what a mouthful. Imagine having to say that kid’s full name every time you address him. “Squire Sebastian Senator, can you tell us why you’ve decided to emancipate yourself from your Mom?” I’m exhausted!

I never knew this family could be so judgmental. We come from a long lasting family of both squires and senators. If you look back in our family tree, the survival of this clan is literally rooted in squiredom.

Wait, like, squires as in the guys in medieval times who helped knights get in and out of their armor? That’s what you’re going with? The guy who helps a Sir Farts-A-Lot get to the latrine in between jousts?

We are all related to senators too. This name conveys power. It conveys wealth. It conveys success.

Ah yes, nothing will garner respect like naming your child after a member of one of America’s most hated institutions. Also, why “Sebastian”? Do you just love The Little Mermaid?

My baby’s name WILL be a revolution. It will push people to question everything. Why name your baby boring and over-used names like Joshua, Brian, Sam, Nick, Mark, Bella, Marina, etc… when you can name it something special.

I wonder how she picked these specific names? I’m assuming some of the people she’s putting on blast are parents, and these are their kids’ names. DON’T TELL ME HOW TO NAME MY KID WHEN YOU GAVE YOURS A BASIC-ASS NAME!!!

Squire Sebastian Senator will live a powerful, wholesome life. His confidence will not diminish simply because his name is out of the ordinary. Instead, he will be extraordinary.

I tried to think about what kind of job you could get with a name like “Squire Sebastian Senator.” The best I could come up with was “seahorse breeder.”

F— you all, fake-ass family. You won’t get to be part of my baby’s life all because you had to judge him.

The mom-to-be’s Facebook post blew up on Reddit, receiving over 35,000 upvotes, and the story then went viral across the Internet. People had a LOT of reactions.

Lots of people imagined just how difficult Squire Sebastian Senator’s will be.

Another had a helpful tip for all parents when naming their child.

But most of all, people agreed that this kid is going to have a much more difficult life than us “normal named” people.

We don’t know yet how Squire Sebastian Senator’s life will turn out, but we already DO know that the world at large is NOT onboard with that name. So parents, if you’re picking out names for your kid, name responsibly.