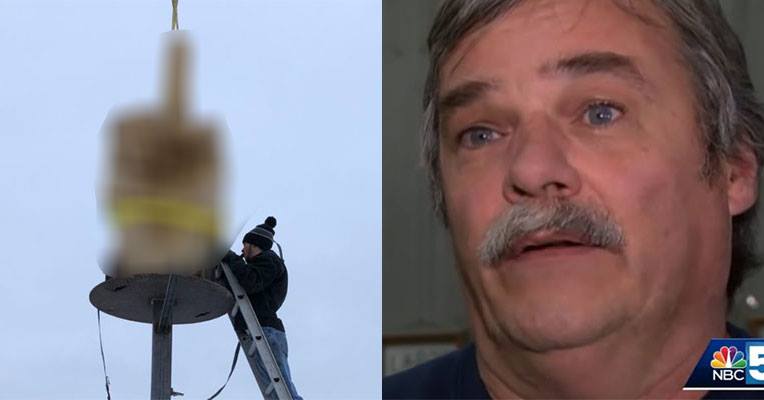 All of us have come into conflict with our town at one time or another. Maybe you received an unjust parking ticket, or maybe you got fined because apparently it isn’t “cool” to be drunk at a playground at 10 a.m. on a Wednesday. If you’re a normal person, you simply accept your punishment as a part of daily life and move on. At most, some of us might write a strongly worded letter. But haven’t you ever wanted to make a statement letting your town know that you’re NOT going to take it any more?

If you have, you have a new hero. His name is Ted Pelkey. He lives in Westford, Vermont. And he recently erected a giant middle finger statue, flipping off city hall. 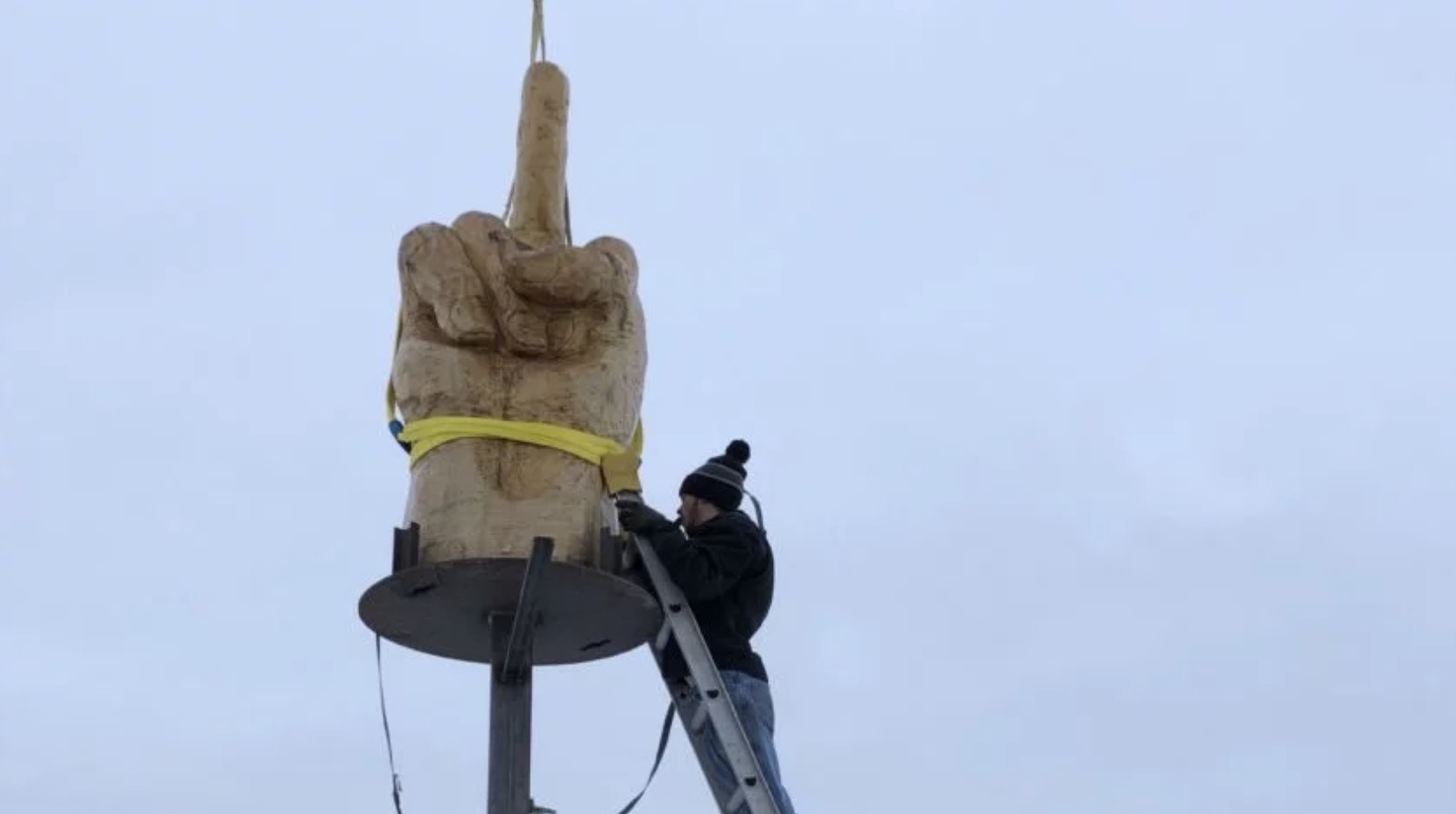 Pelkey was so mad at his town that he was willing to pay $4,000 to commission the sculpture, which was made from a 700 lb block of pine. Today, it’s proudly perched on a platform atop a 16 foot pole on his property. Pelkey even set up two floodlights so the middle finger can be viewed at all hours of the night. If you’re driving northwest on Vermont’s Route 128 past Westford, this is what you’ll see. 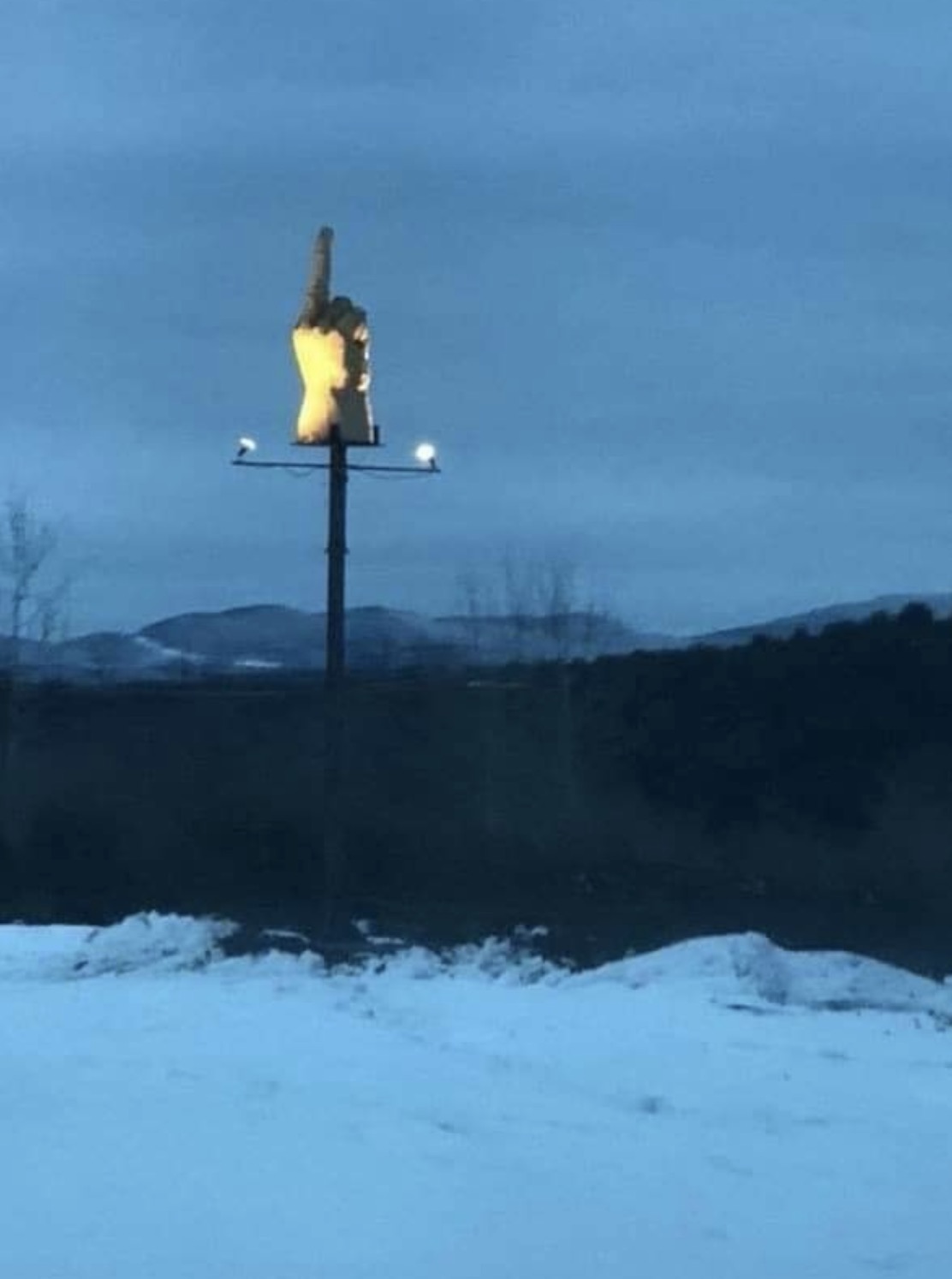 Building a giant bird isn’t a decision you make on a whim. It’s the latest escalation in a decade-long legal battle between Pelkey and the Westford Selectboard and Development Review Board. Pelkey owns a truck repair and monofilament recycling business, but it’s based in nearby Swanton. He wants to relocate the business to his property, and to do that he needs to build an 8,000 sq. ft. garage.

“I’ve been put through the wringer by these people, and it’s just not right,” Pelkey told Boston.com. “I haven’t been treated fairly at all.” 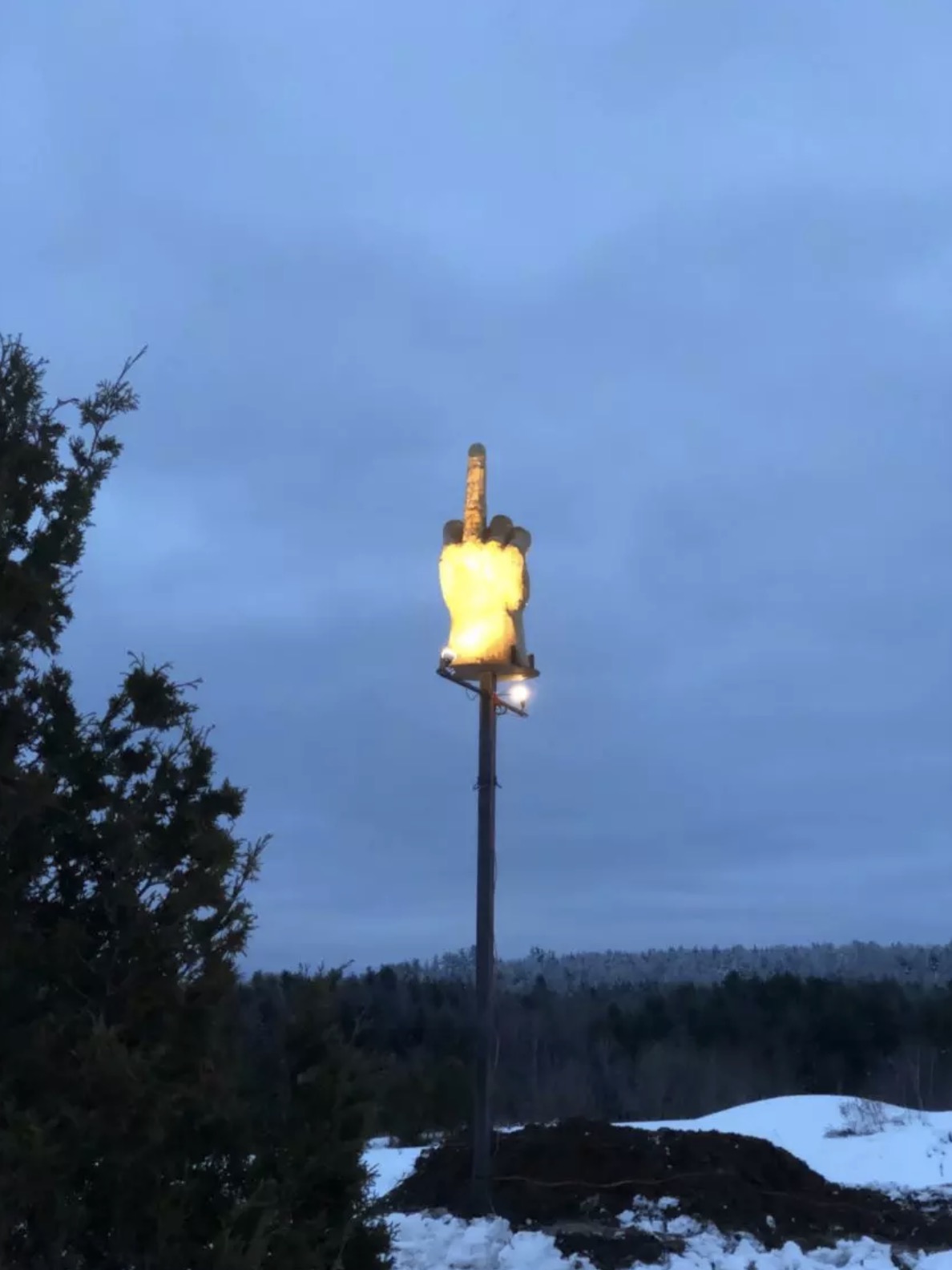 The Development Review Board says that Pekley’s property isn’t zoned for a business, but Pelkey says his plans received the necessary number of points to pass a preliminary inspection. Pelkey claims that the DRB’s decision is not based on the law, but instead comes from personal bias. Pelkey and DRB Chair Matt Wamsganz purportedly have a “fraught personal history” over a past job, though Pelkey wouldn’t elaborate on that.

DRB member Allison Hope insists that the board is impartial. “We’re all professional adults in this realm who are volunteering our time and energy for the benefit of town residents (we would hope),” she told Boston.com in an email. “Even if one person on the DRB has had somewhat less than stellar interactions with a member of the public, it doesn’t mean they can’t deal with any applications that have to do with that person in an appropriate manner.” 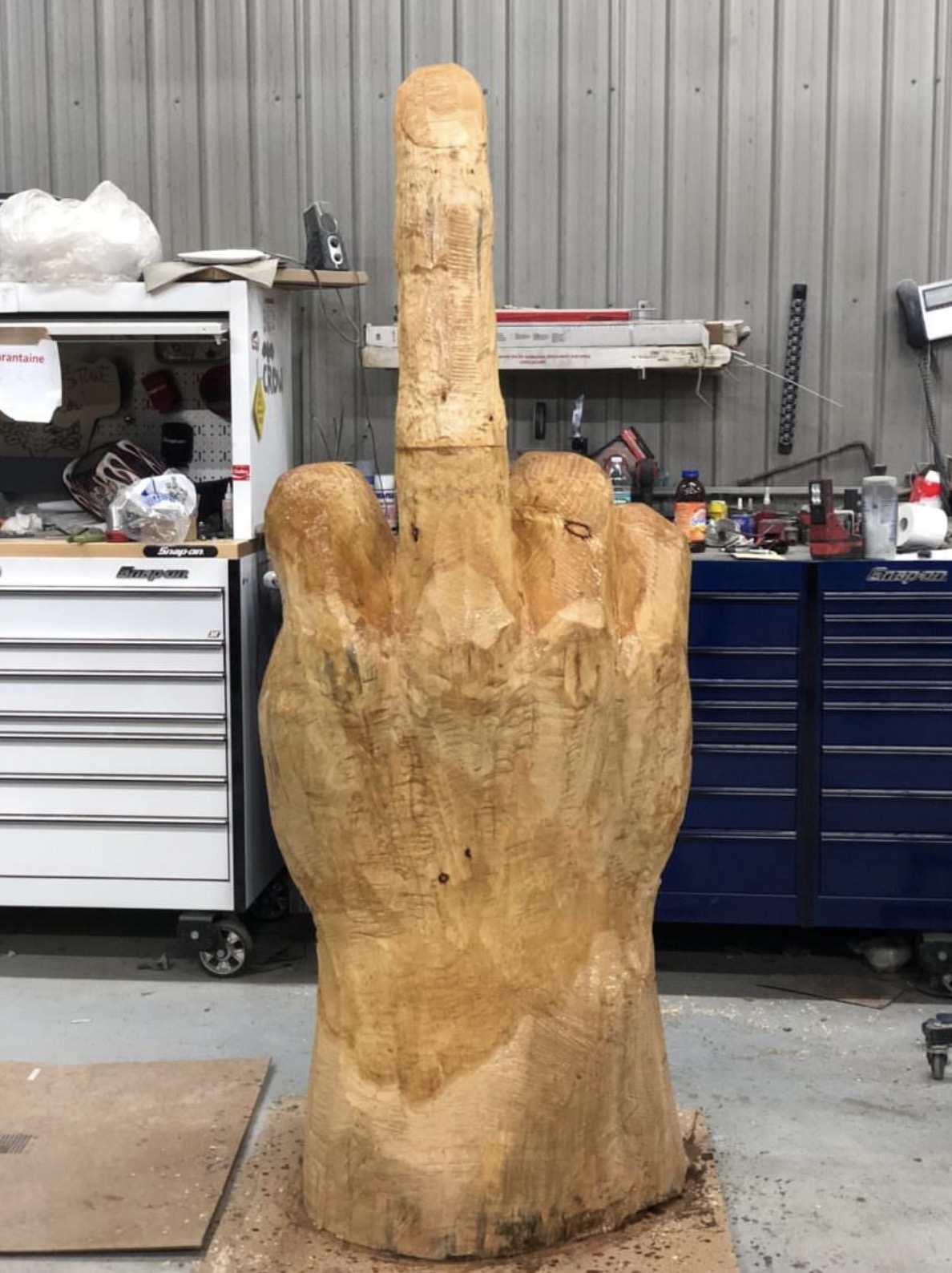 At this point you’re probably wondering how Pelkey is allowed to do this. Isn’t it illegal to mount a giant, obscene gesture for your entire town to see? Apparently not! Get ready for more than you ever wanted to know about Vermont public advertising law!

The state of Vermont does ban billboards that contain “off-premise advertising,” which is basically any message that isn’t an advertisement of some kind. But since Pelkey’s big eff you isn’t advertising his business, it’s exempt. That’s according to the Vermont Department of Transportation, which reviewed the case.

“Although the structure is visible from a state highway, it is outside of the State Right of Way and not within our jurisdiction,” said Jacqui DeMen, a spokeswoman for the agency. “The structure does not meet the statutory definition of ‘sign’ and thus can’t be regulated under the Vermont Billboard Law.”

Instead, the huge middle finger is classified as public art, and thus is protected free speech. Yay, Constitution!

And so, the middle finger will remain, until one side budges on the issue. Pelkey understands that a massive flip of the bird visible to any passersby might be upsetting to some people, but he insists the message is directed at the Development Review Board, and not the town as a whole. In an interview with local WPTZ News, he said:

“It was critical to me to make sure that my neighbors and the people who live in this town understood that I didn’t put that up there for them. It is aimed directly at the people who sit in our town office. 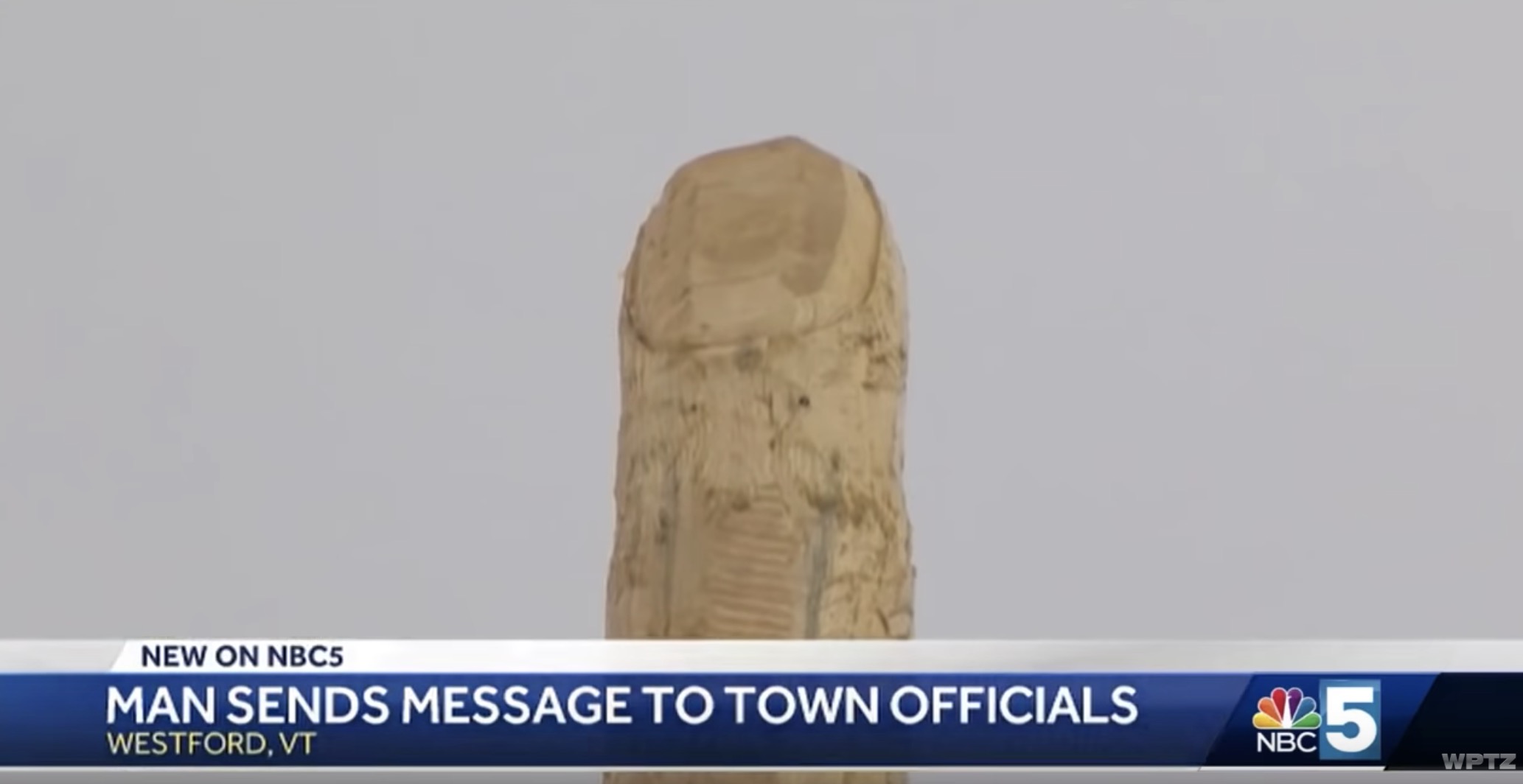 If Pelkey’s plan doesn’t work, he can always reach out to Alan Markovitz, aka the guy from Detroit who bought the house next to his ex-wife and erected another giant middle finger facing her window. I’m sure they have lots to talk about, and maybe start a support group. 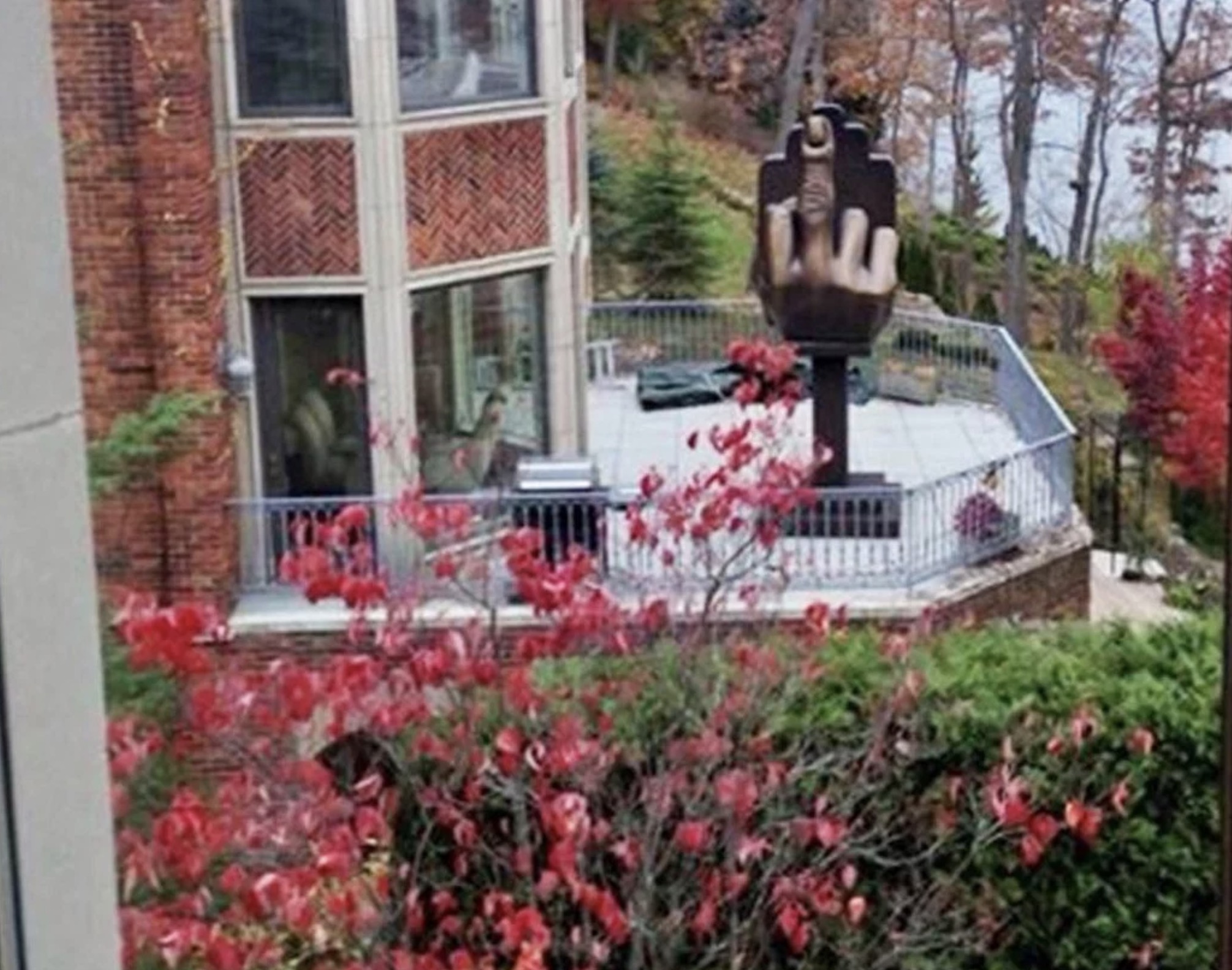