Millennials Are Skipping Wedding Rings And Embedding Diamonds In Their Fingers

Everyone knows that as much as weddings are supposed to be about love, they’re also hugely stressful. And one of the biggest pre-wedding stressors is picking out the perfect wedding rings. Not only does the ring have to symbolize your eternal love for your partner, it also has to be something you’d want to wear every day. Then there are issues like expense, finding the right size, and maybe even family pressure. 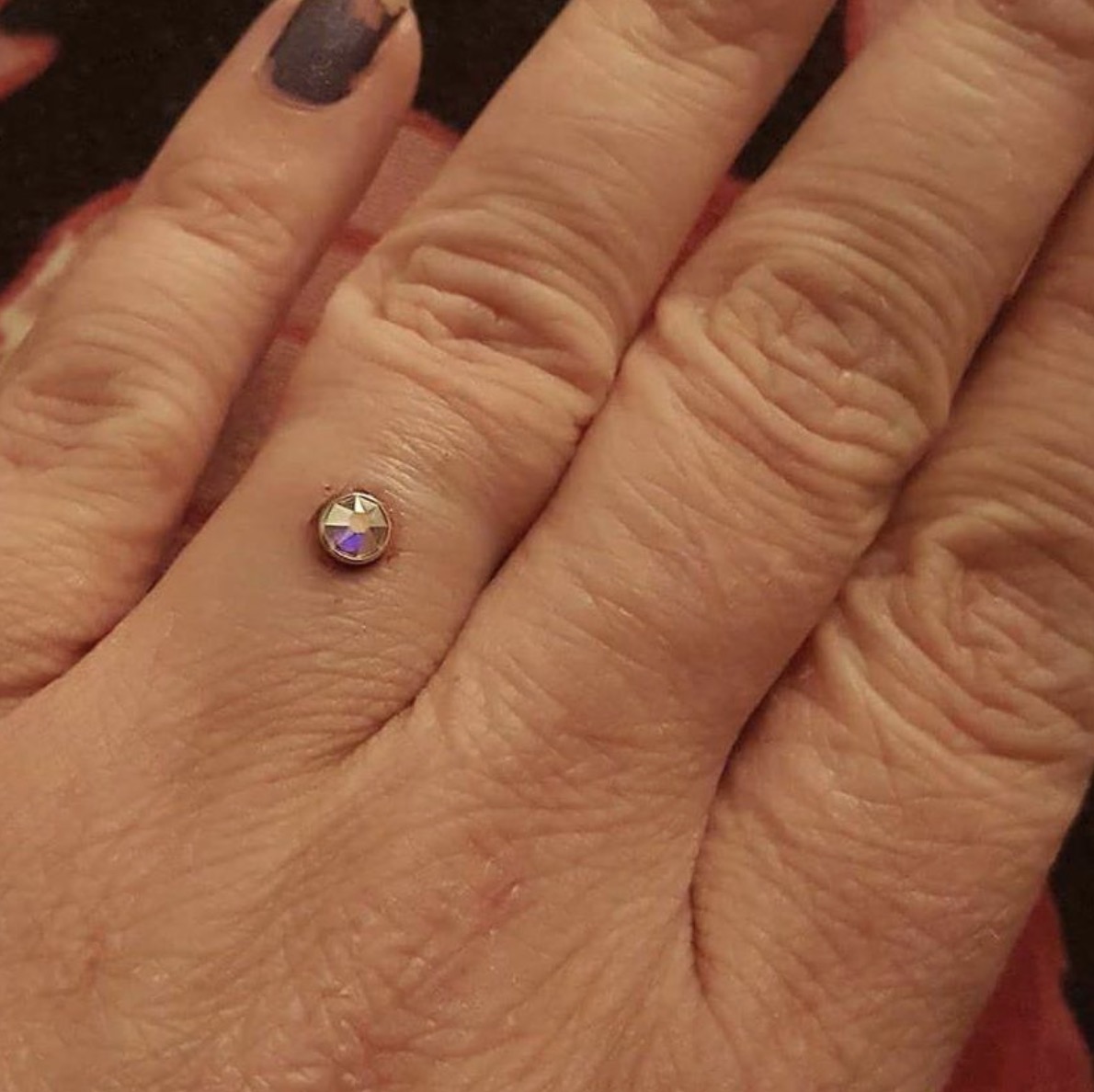 Now, the first question that comes up whenever we do stories like this is, is this really a trend, or is it just a few people on Instagram getting too much attention? Are millennials going to reject wedding bands entirely, forcing a whole generation of family heirlooms to go unused?

Probably not, but that could be changing! Florida-based body piercer Billy DeBerry says people have been asking for finger dermals for years, but they’ve recently surged in popularity thanks to social media exposure.

“Micro dermal anchors are safe and the body will hold them for years, as long as they’re in ideal places and if implant-grade titanium is used,” DeBerry told People. 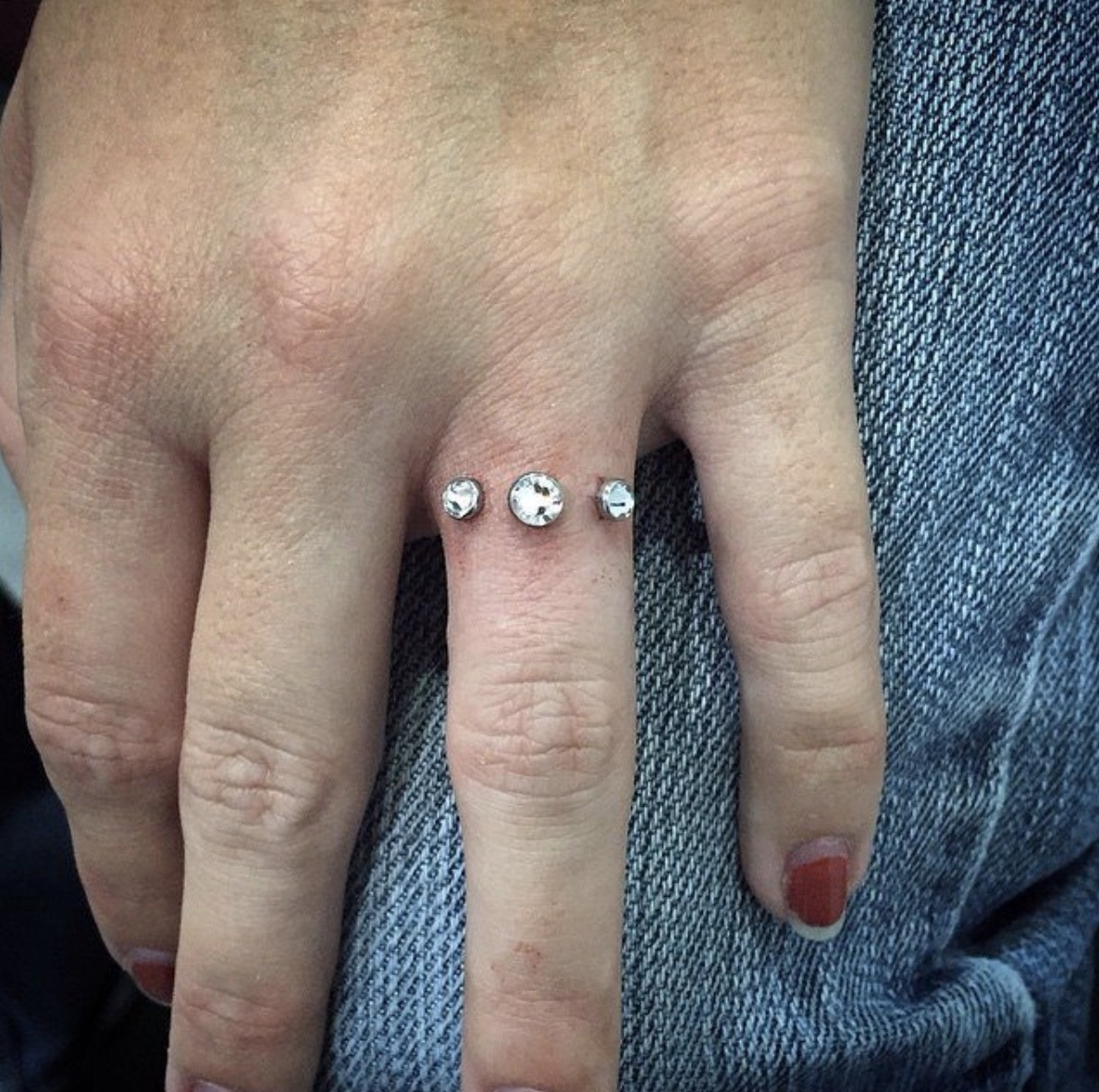 If you’re like me, all you can see with this non-trend trend are problems. One of the biggest pluses to a traditional wedding band is that you can take if off. Not so with a dermal implant. What if you need to wear latex gloves? What if you have to fit your hand into a tight space, like the gap between your fridge and the wall? What if you wanted to do some bare-knuckle boxing? A dermal implant would give you an unfair advantage. Basically, it affects every aspect of your life. 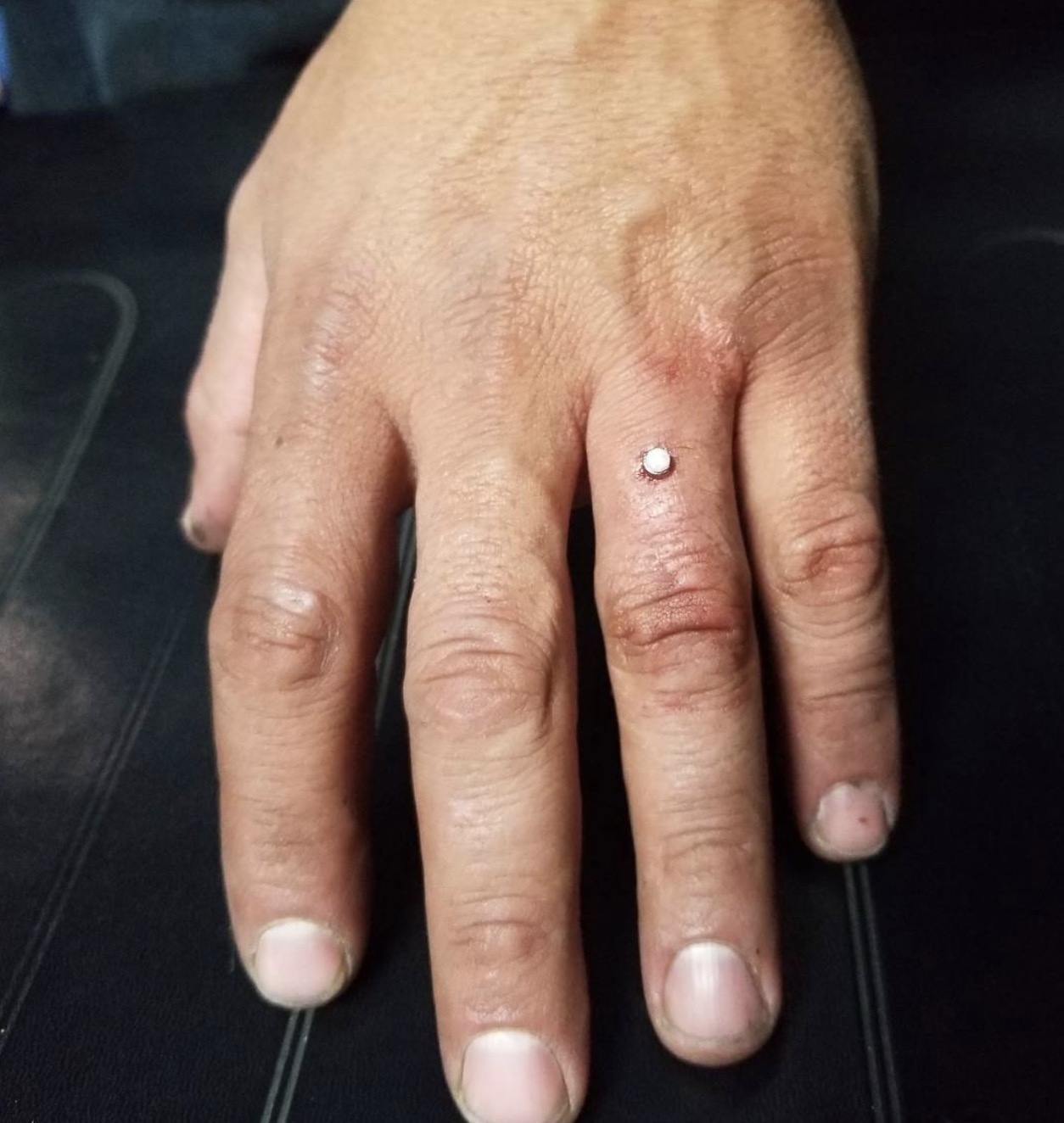 Nevertheless, DeBerry says people like finger dermals because they’re unusual. “They’re different than other piercings since it’s considered ‘surface work.’ It really lets a person get away from traditional piercings like the ear or nose,” he said.

Even better, once you’ve got the anchor implanted under your skin, you can change out the diamond for a variety of tops with different colors, sizes, and shapes. Very handy in case things go sideways with your fiancee.

Also, it needs to be said that dermal implants eliminate the dreaded “wedding ring tan line” that appears when you take off the ring. Adultery has never been easier! 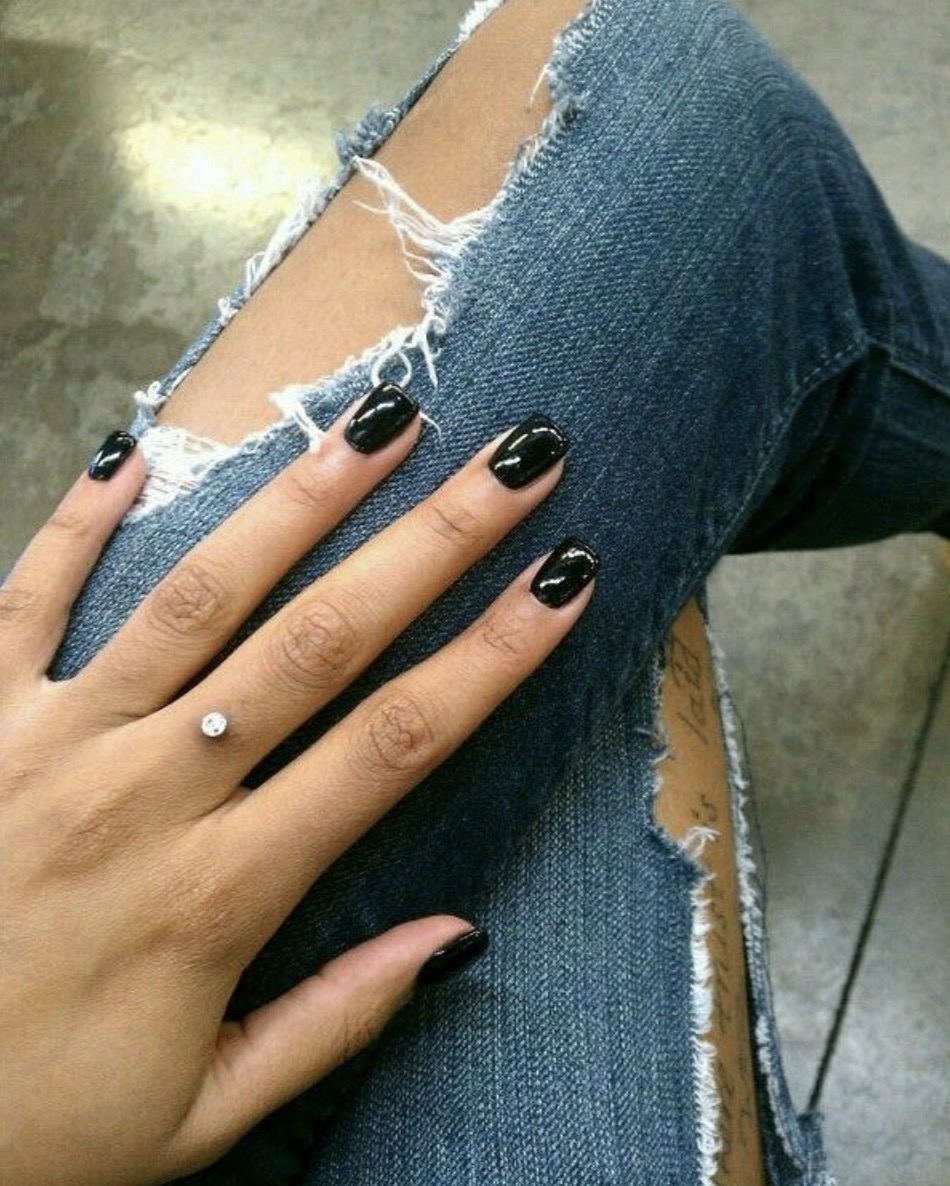 Now that you’ve decided to get a finger dermal, here’s what you’re in for. The piercer uses a “punch” to remove a small circle of skin–just like a hole punch for a piece of paper. Then the piercer inserts a metal anchor, into which the diamond can be placed. The whole procedure only takes a few minutes, and you don’t need stitches or a doctor’s visit.

But how painful is it? According to NYC Ink Studio owner Sam Abbas, it’s not very painful at all. “You’re going to feel it. You’re getting pierced. It is a little bit painful, but people do it, and I have a lot of people who say, ‘Oh, nice. It’s nothing; I expected more [pain],'” Abbas told Allure. 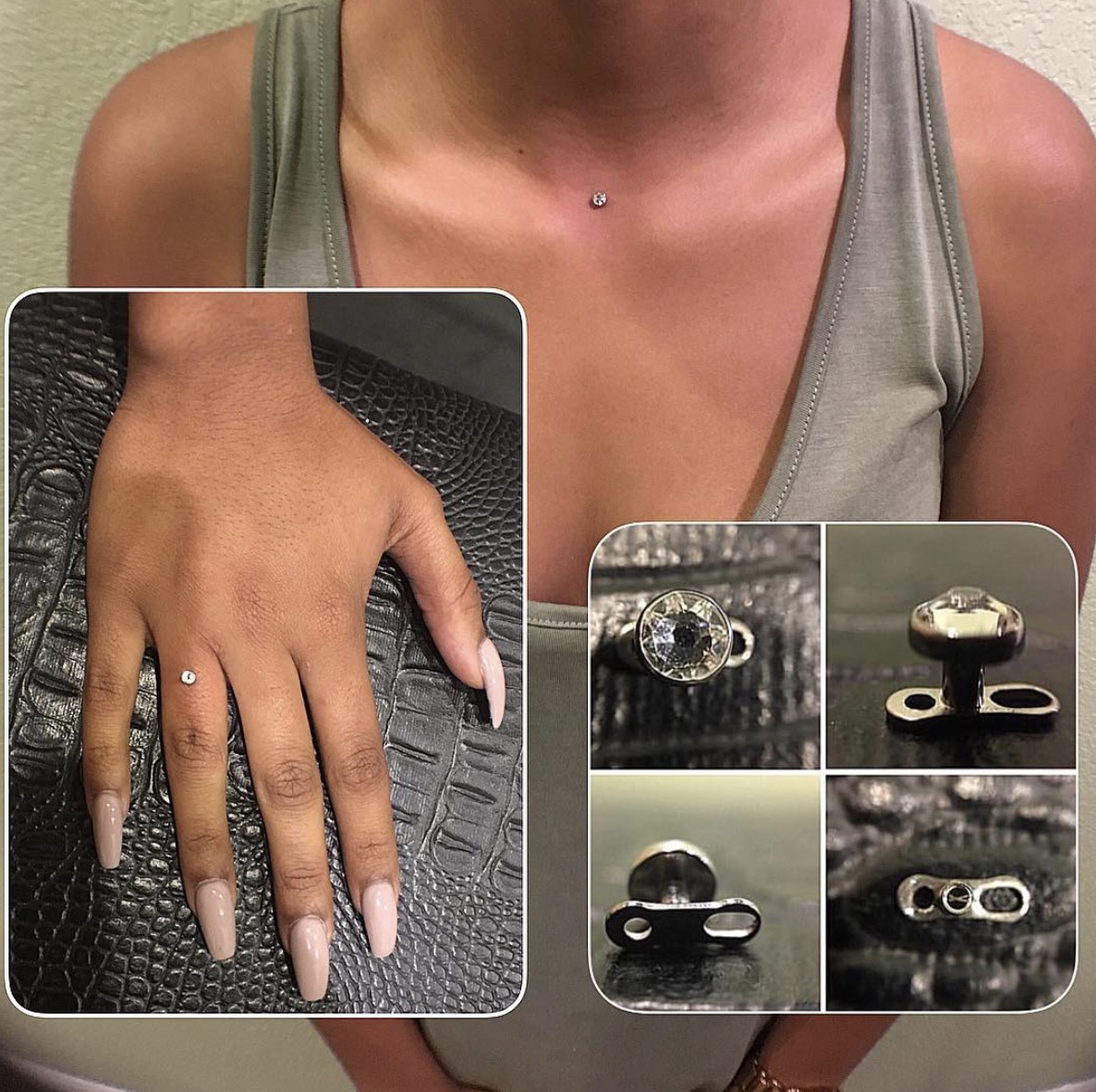 Recent finger dermal recipient Anne Cunliffe agreed. “The pain was nowhere near as bad as I had expected, and the discomfort afterwards was minimal, too,” she told Allure. “I never had an engagement ring — couldn’t afford one I liked — and I thought a finger dermal would be something different to have instead. I’d seen one online where the gems were magnetic and you could change them yourself easily, so I decided to go for it.” 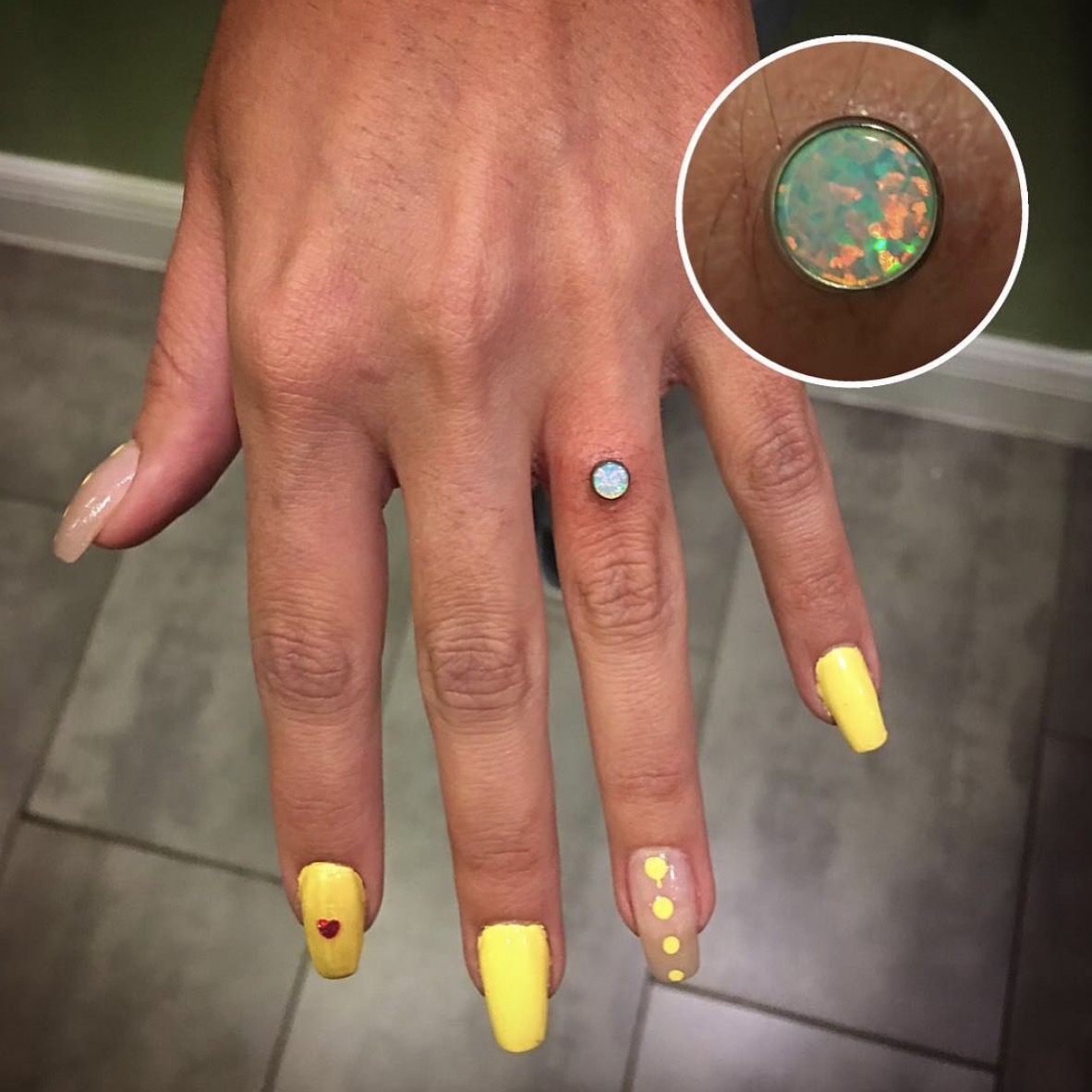 But not everyone’s convinced, particularly medical professionals. The procedure carries a risk of infection, so sterilization is paramount. Then, metal anchor itself can cause an allergic reaction if it’s not made with titanium.

But most of all, they’re just dangerous. “My concern with a dermal piercing in the finger is the location,” says Joshua Zeichner, director of cosmetic and clinical research in dermatology at Mount Sinai Hospital in New York City. “There is constant movement in the fingers, which could displace the piercing. Think about how many times we accidentally bang our hands against the side of the table or doorframe.”

Which is pretty much exactly what happened to Anne Cunliffe. “I got impatient and uncovered it too early, and within a month it got caught and pulled out while I was driving. I had it put back in and, sadly, it rejected,” she said. “I’ve got an actual engagement ring now.” 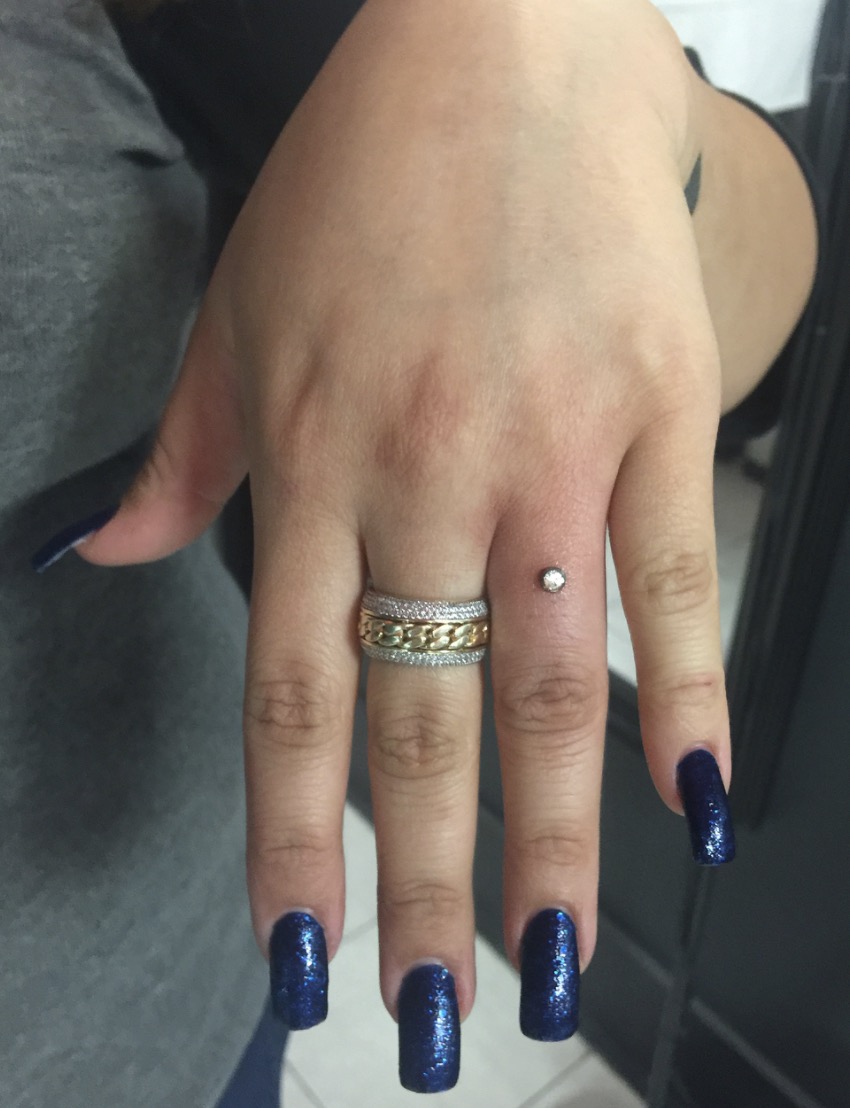 The general public was even less convinced. When finger dermals first got widespread attention, people took to social media to express their displeasure. 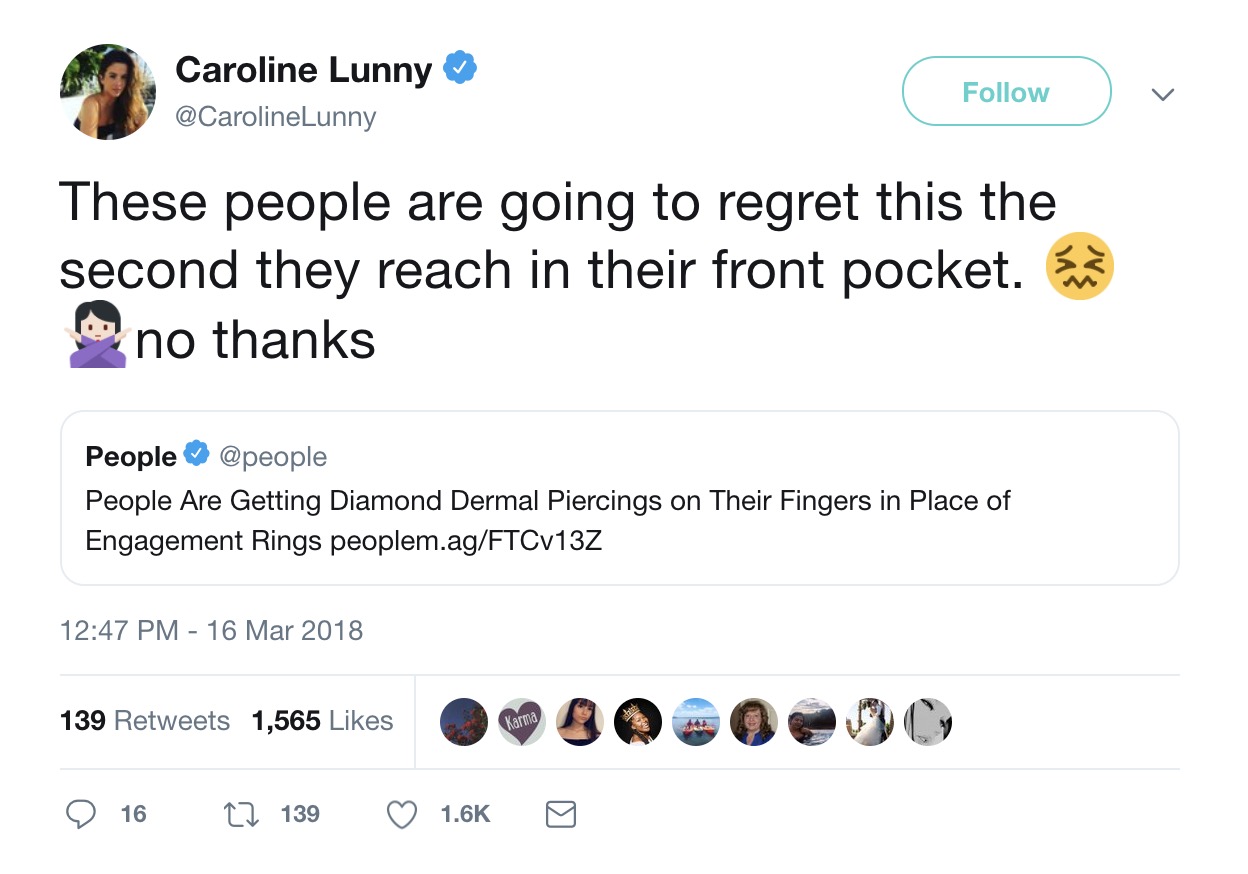 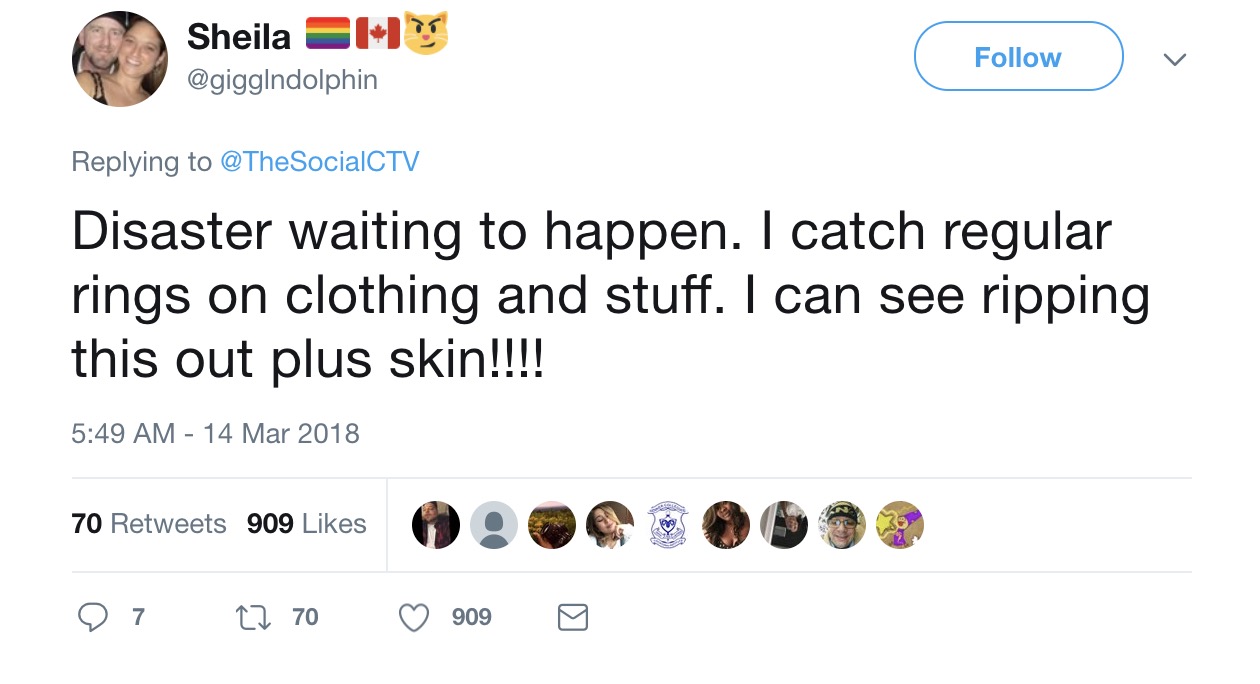 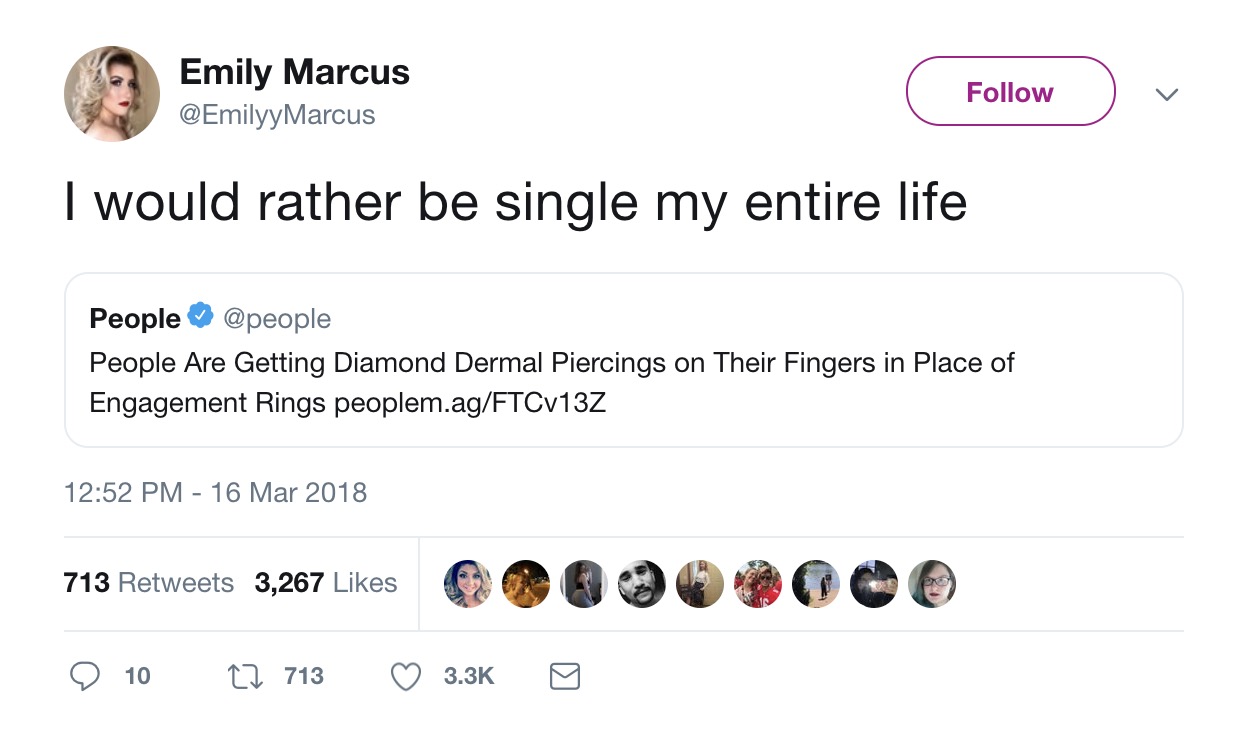 So it looks like finger dermals have a long ways to go before they achieve public acceptance. When that does happen, you can be sure Beyoncé will update the lyrics to “Single Ladies” to read: “If you liked it then you should have put a diamond on top of a metal anchor that’s preferably titanium and not nickel, on it.”