Meet Tommy Tucker, The Most Famous Squirrel Of The 1940’s

We live in a celebrity-obsessed culture. Celebrities don’t even have to be human beings to be famous. In recent years people have fallen in love with all sorts of animals, from Grumpy Cat to Uggie, the dog from the 2011 Best Picture Oscar winner, The Artist.

You might think that celebrity animals are a recent mass-media phenomenon, but actually there have been famous animals for decades. And in the 1940’s, few animals or humans were as famous as Tommy Tucker, aka the squirrel who wore clothes. 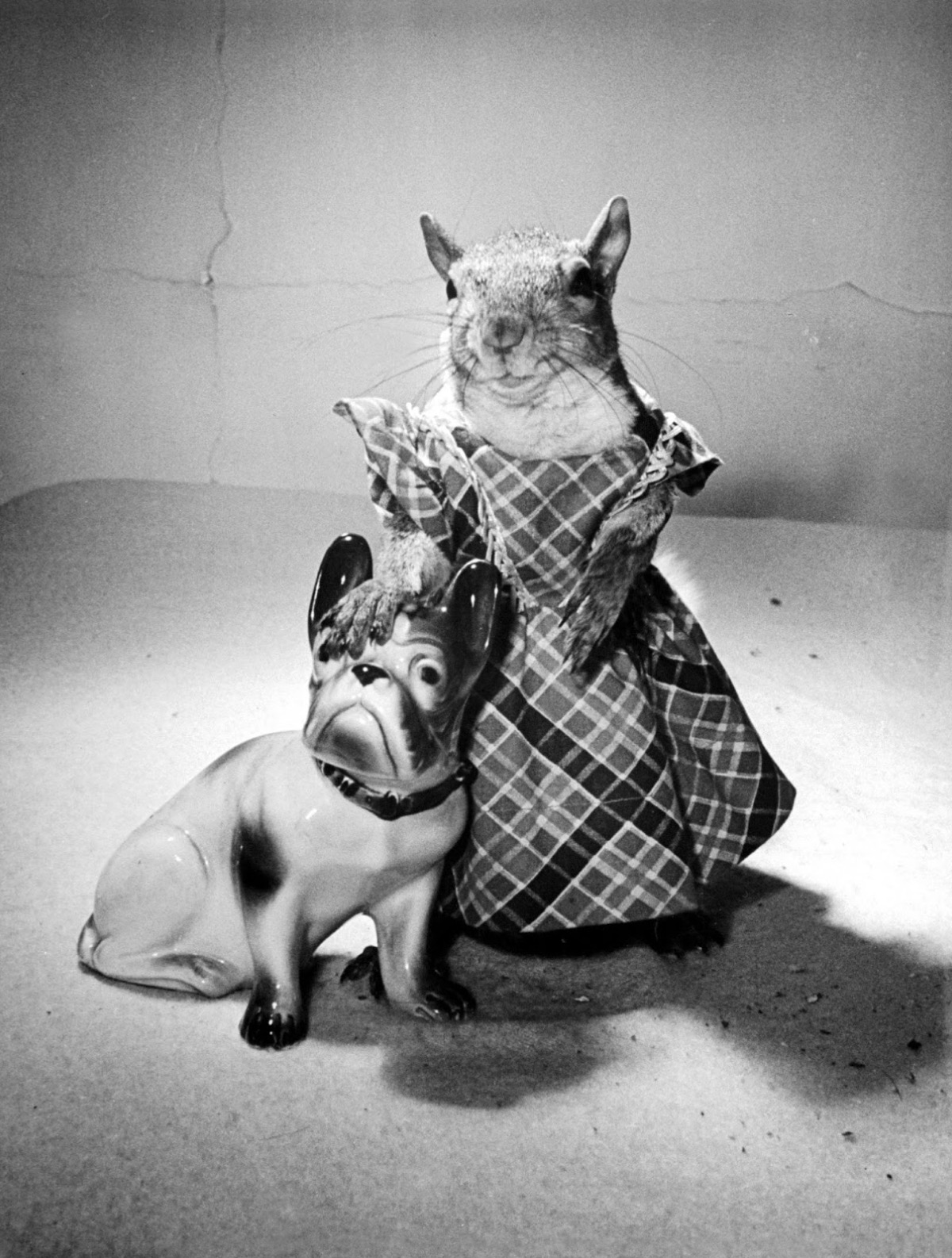 If you’re waiting for more of a reason as to why Tommy became famous, I’m sorry to say that’s all I have for you. Tommy’s entire schtick was that he was docile enough to wear clothes. That was enough to get him his own Life magazine cover spread and a fan club in the tens of thousands.

Tommy was an Eastern gray squirrel, born in the wild. In 1942, Tommy was adopted by Washington, D.C. couple Mark and Zaidee Bullis. Nobody really knows how this happened. Some say that Tommy fell out of a tree while still a blind and hairless infant. Others say his mother died, leaving him an orphan. Still others say a child found him and brought him to the Bullises. 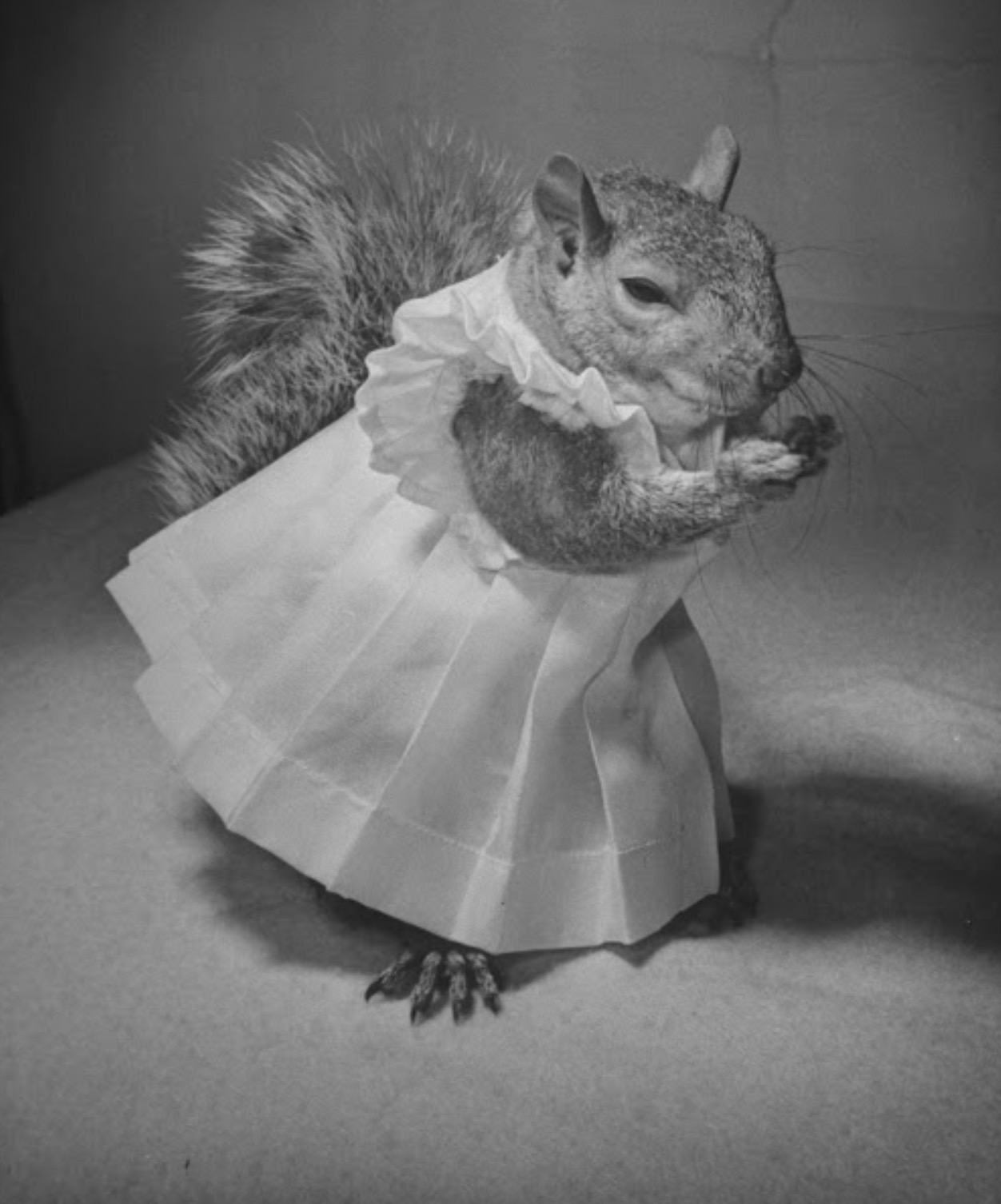 However it happened, Tommy arrived at the Bullis household weak and sickly, but quickly regained his strength. Zadie Bullis fed him a diet of milk from a spoon, walnuts, vegetables, bread, cookies, and sometimes avocados. Tommy’s appetite inspired Zadie to give him his name–“Little Tommy Tucker” is the subject of a nursery rhyme about a boy who sings for his supper. 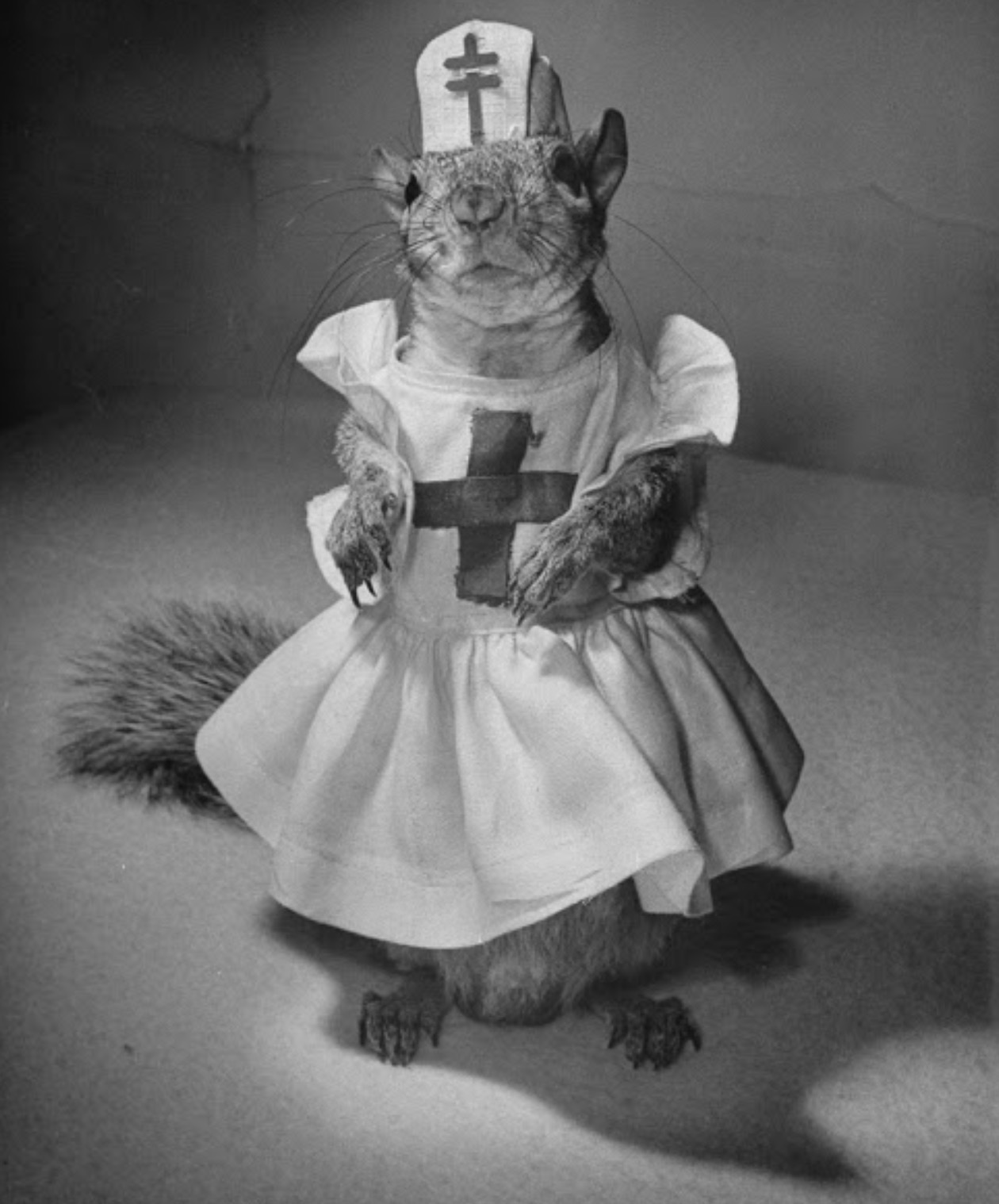 Mark Bullis was a dental surgeon, and it’s believed that one of his patients knitted Tommy’s first dress. Zadie Bullis would take her nattily dressed squirrel on trips to the grocery store, and soon Tommy had attracted a local following. He frequently visited local children’s hospitals, and at one point he performed for 500 schoolchildren at nearby Silver Spring Elementary. 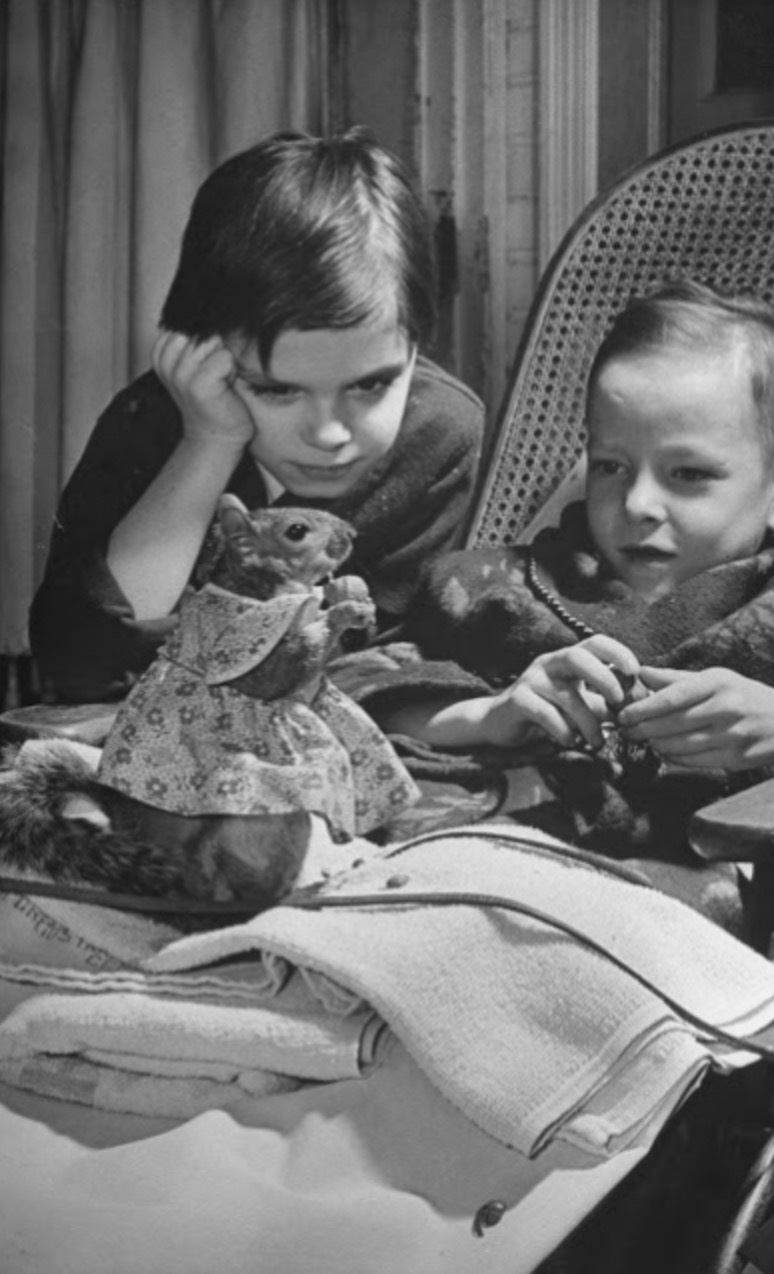 Tommy’s fame grew and grew. Observers noted his unusually calm demeanor. He would rarely nip at Mrs. Bullis, and he allowed her to bathe and dress him–the reason Mrs. Bullis gave him dresses was simply that his tail wouldn’t allow him to wear pants. In 1944, Life magazine gave him his very own photo spread, showing him in various outfits. He starred in a Paramount short film, and he even had his own fan club with 30,000 members, who all promised to be kind to animals. 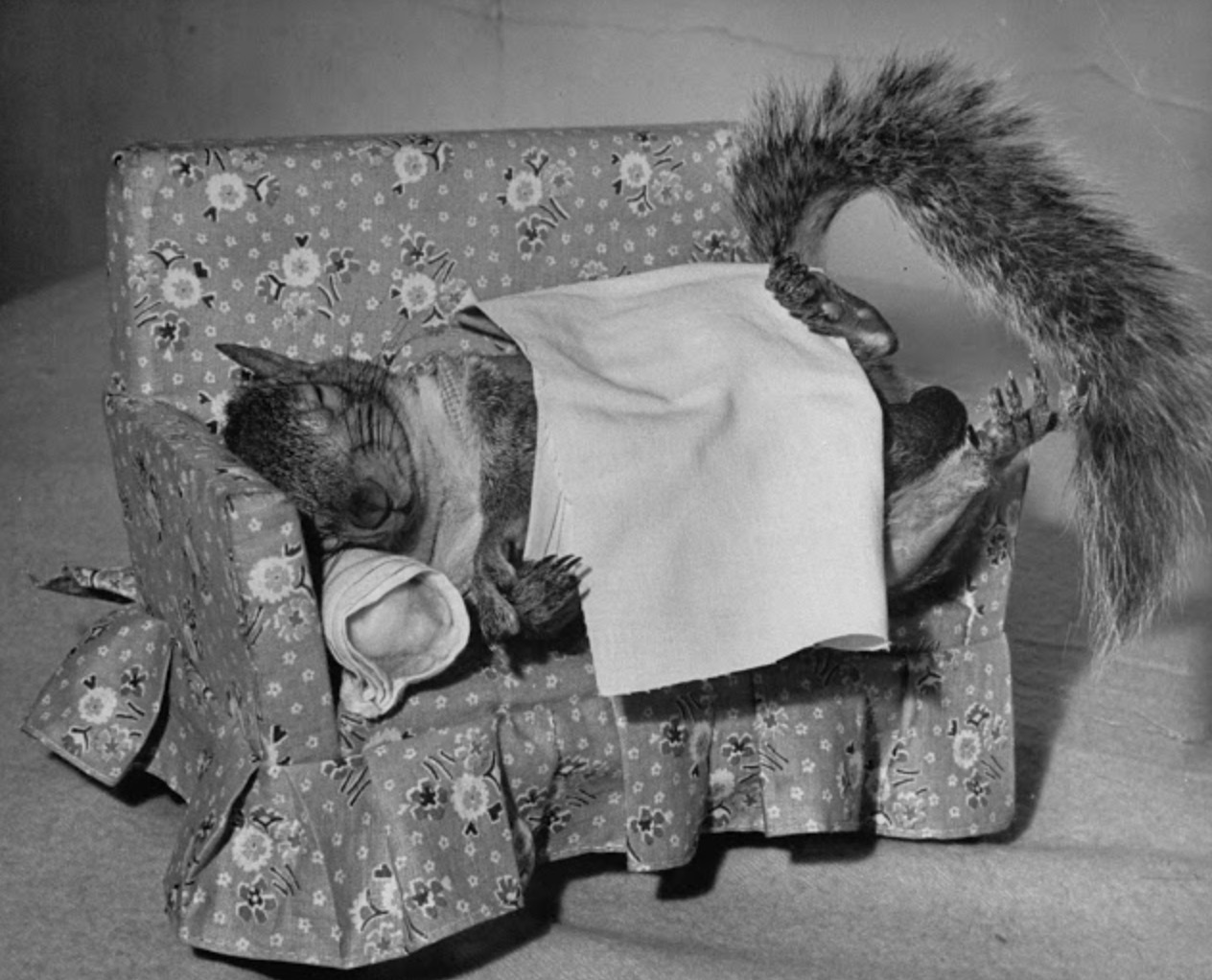 Tommy’s rise to fame coincided with World War II. Like many human celebrities of his day, Tommy’s fame was used to promote the war effort. He appeared in a national radio ad selling war bonds, alongside President Franklin Delano Roosevelt.

Did the Axis Powers have animals that dressed up? They did not. Is this why they lost the war? Who can say? 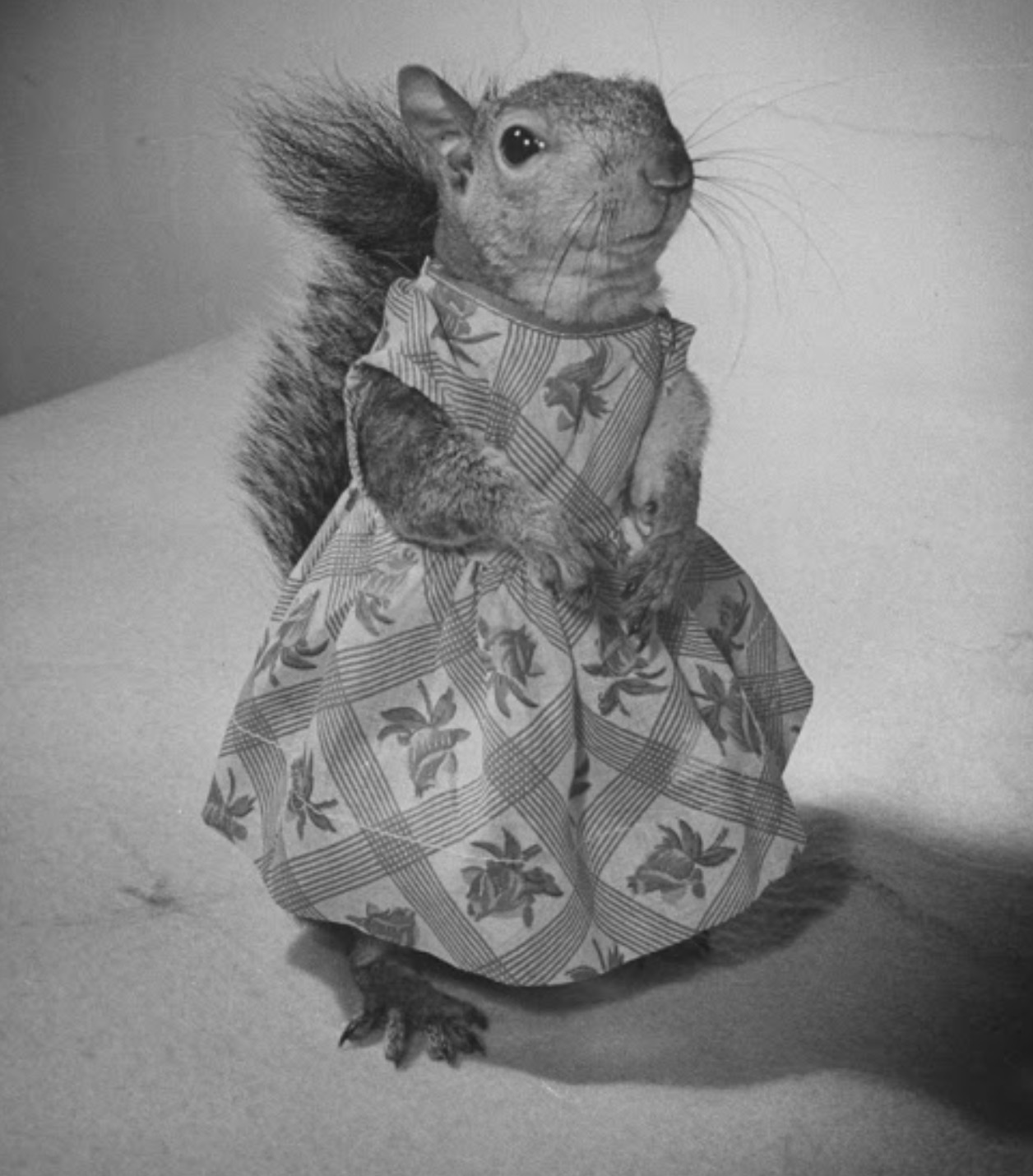 But every celebrity knows that fame can be fleeting, and Tommy was no exception. He dropped off the radar from the end of the war until 1948, when he was involved in a border dispute between Arizona and California. The Bullises were trying to take Tommy across state lines, but California agricultural officials needed to be convinced that he was a pet, and not a wild animal. The same thing happened a year later when they tried to take him into Mexico.

If Tommy could talk, you’d have to think he would have dropped a “Do you know who I am?!” 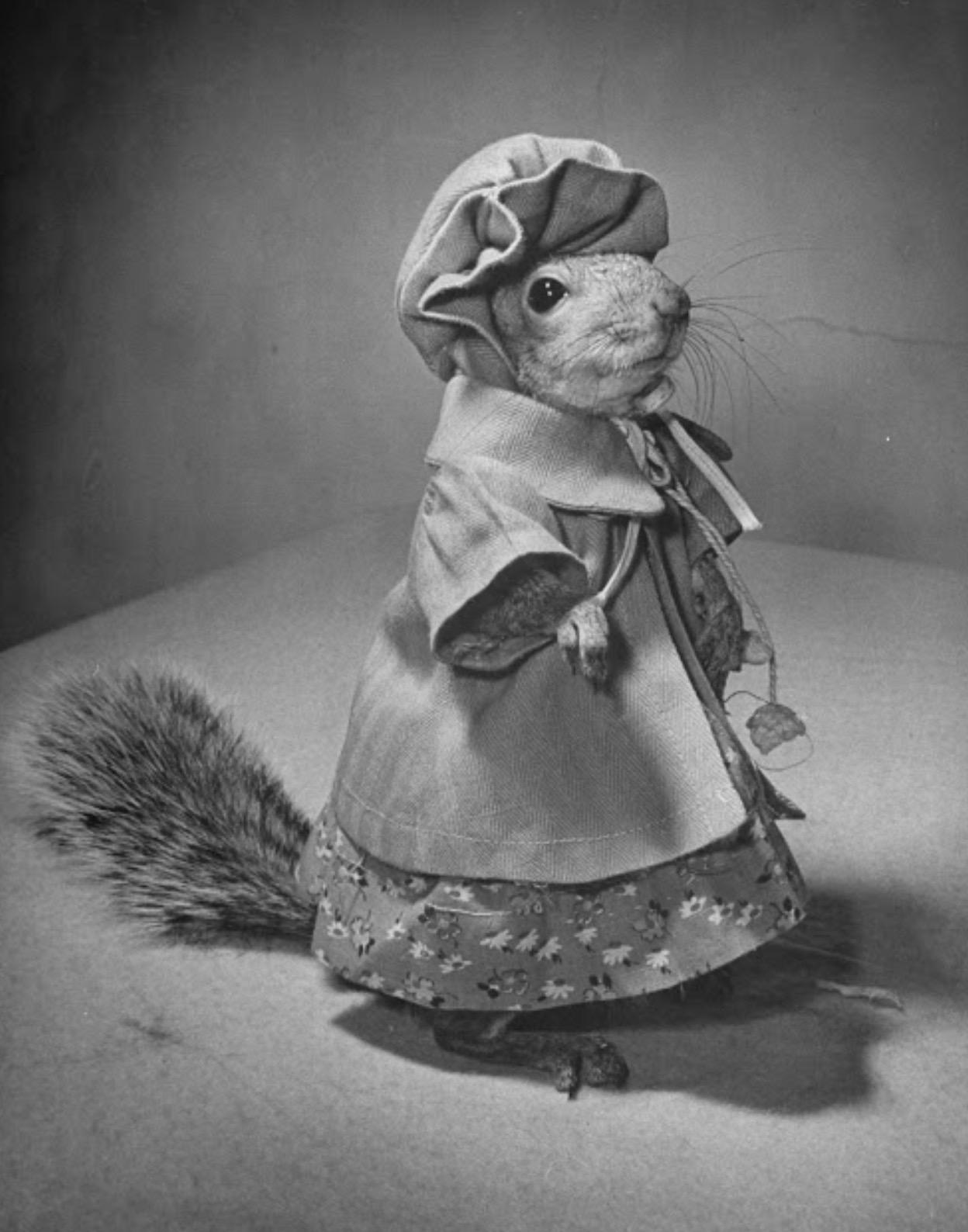 By 1949, Tommy had already surpassed the Eastern gray squirrel’s average life expectancy of six years. He was not long for this Earth. On June 25th, 1949, during a trip to the Grand Canyon, Tommy passed away. Grand Canyon superintendent Harold Bryant wrote in his monthly report that Tommy had died of a heart attack brought on by old age.

The most famous squirrel in the world was gone, but his story wasn’t quite over yet. 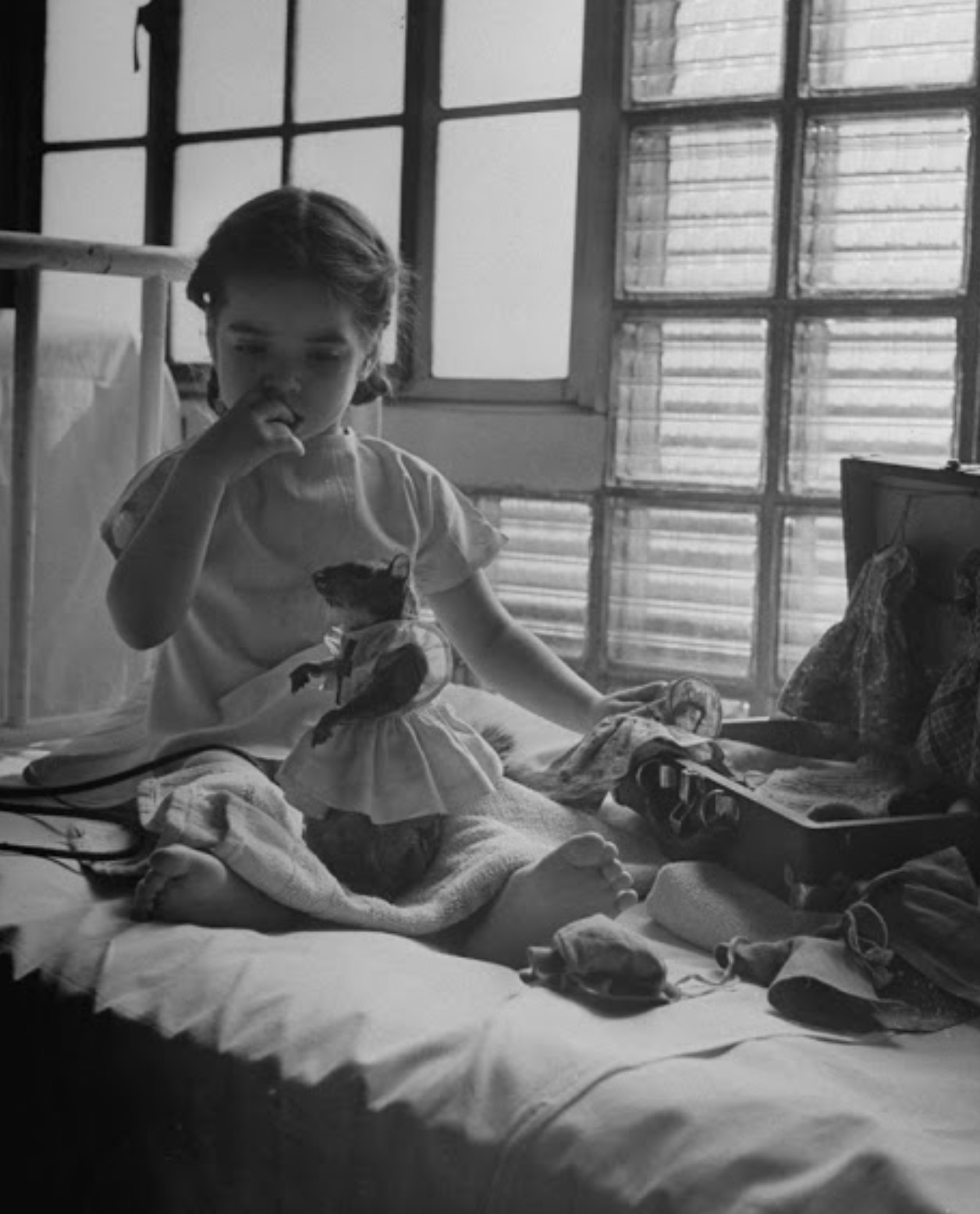 Tommy’s body was sent to Denver, Colorado, where he was taxidermied by the Jonas Brothers–not the teen pop idols, but a family of taxidermists that are still in business today. “[Tommy] was mounted with his arms out so you could pull the clothes over him,” said Jack Jonas, who was in high school at the time.

The Bullises planned to donate Tommy’s remains to a museum, but that didn’t happen. Eventually, the stuffed Tommy ended up in the possession of Maryland woman Elaine Le Martine, who’s apparently Zaidee’s great-niece. When Elaine passed away in 2005, she bequeathed Tommy to the Smithsonian Institution in D.C. They declined. 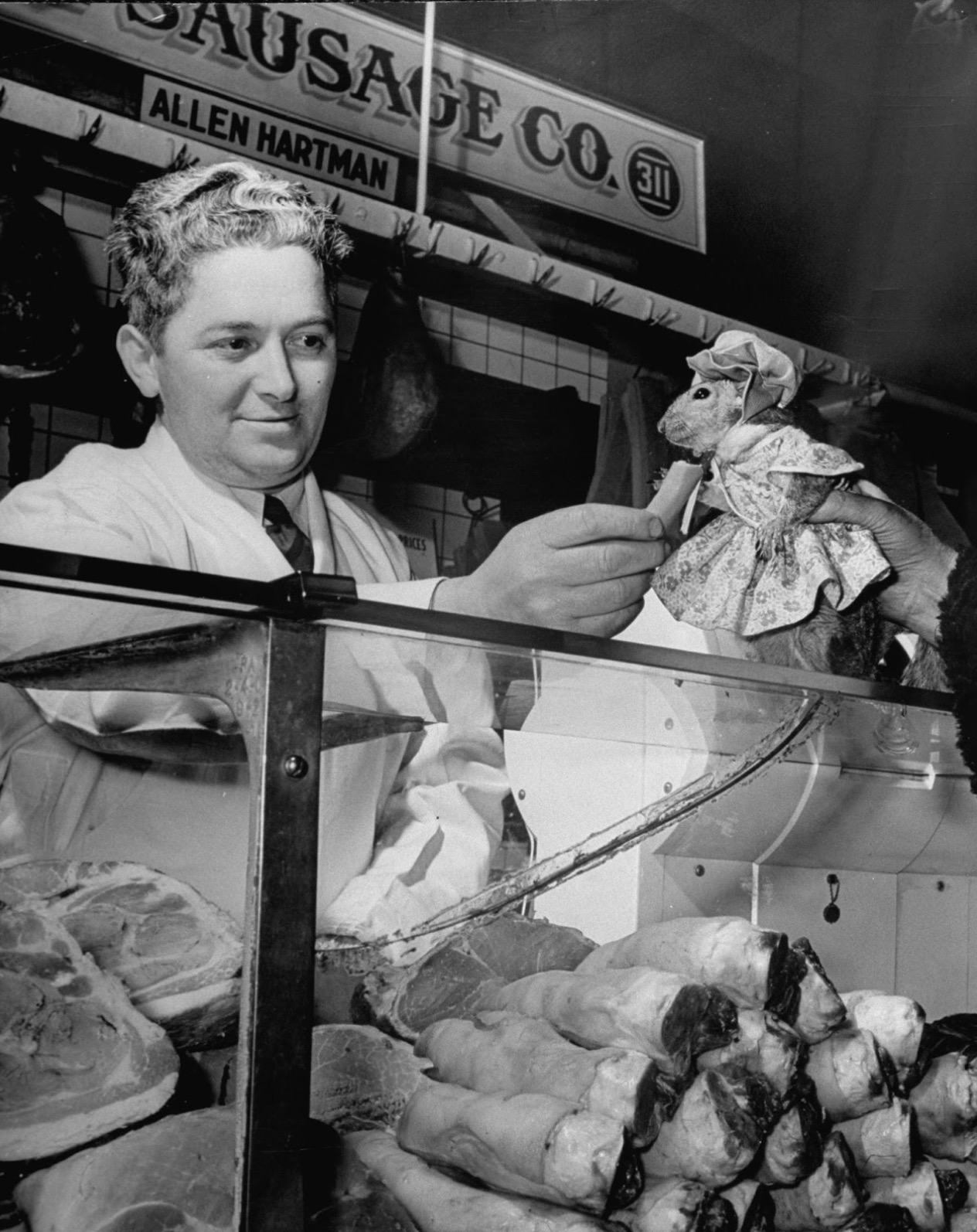 Tommy remained in Elaine’s lawyer’s possession until 2012, when a Washington Post reporter brought attention to the story. The Smithsonian finally accepted Tommy’s body, and he’s now located at the Archives Center of the Smithsonian Museum of American History. Along with his body, the collection includes many letter from Tommy’s fans and well-wishers. 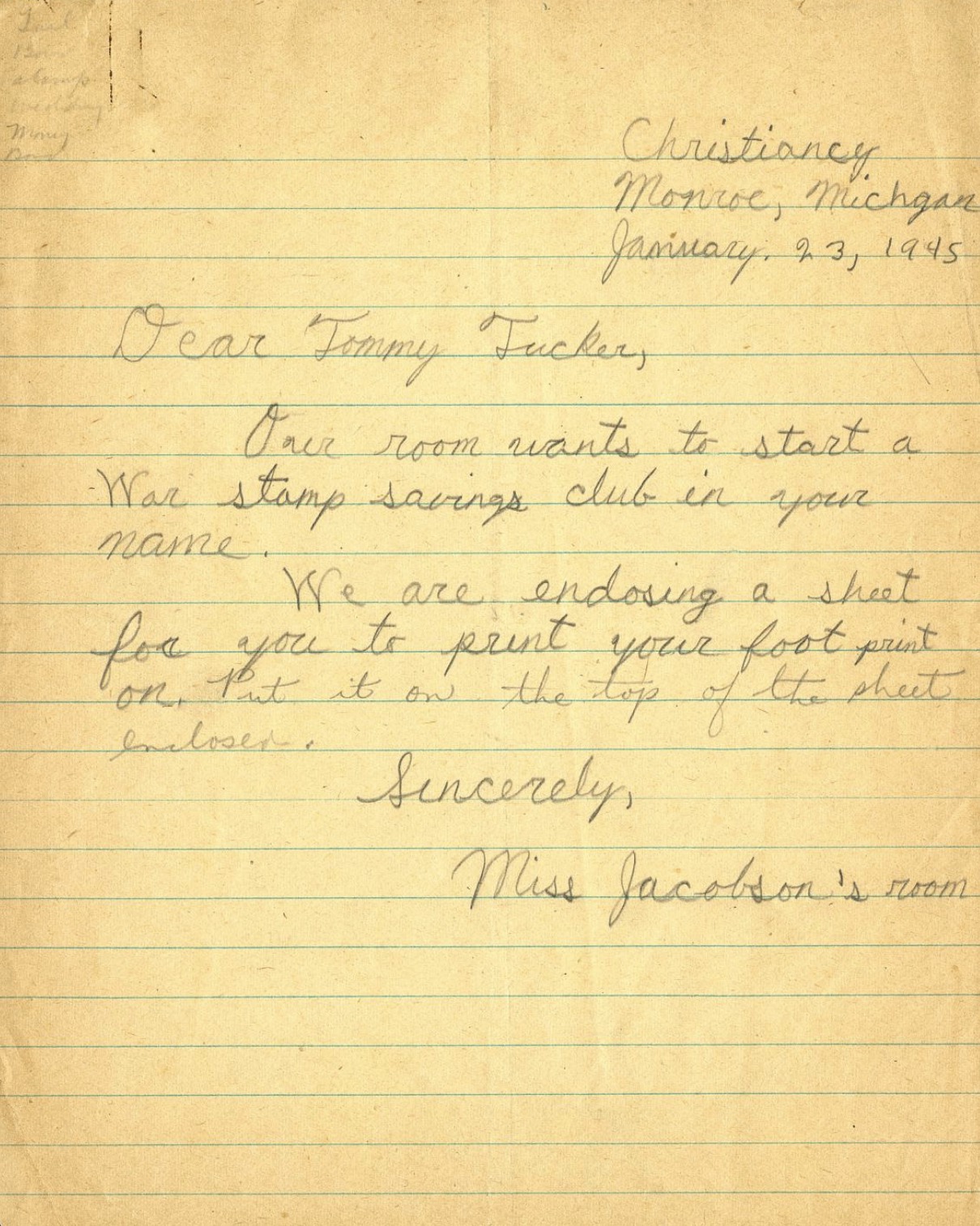 RIP, Tommy. You are gone but not forgotten. If there’s a squirrel heaven, I hope you’re up there chowing down on acorns while wearing a fashionable, tiny taffeta gown.