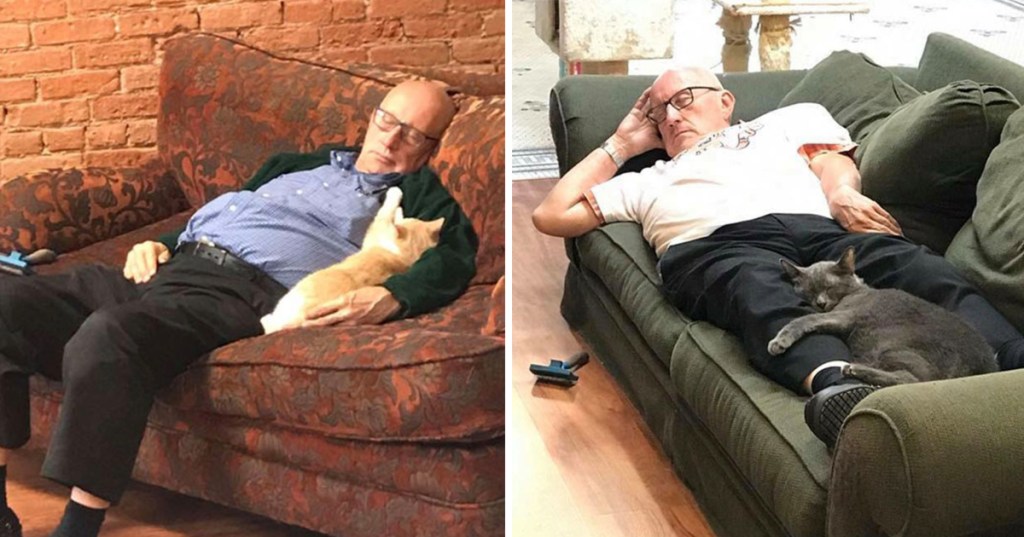 Volunteering is one of the best ways to spend your time, because it has so many benefits. It helps others. It makes you feel good about yourself. And there are even some tangible health benefits, like depression relief and improved mental clarity. And if you’re Terry Lauerman of Green Bay, Wisconsin, volunteering is also a great way catch some Z’s.

He’s a 75-year-old volunteer at the Safe Haven Pet Sanctuary, where he helps take care of the cats.  Earlier this week, the animal shelter published a Facebook post praising Terry’s dedication. Terry brushes all the cats and has gotten to know their likes and dislikes, but most of all, he naps with them. 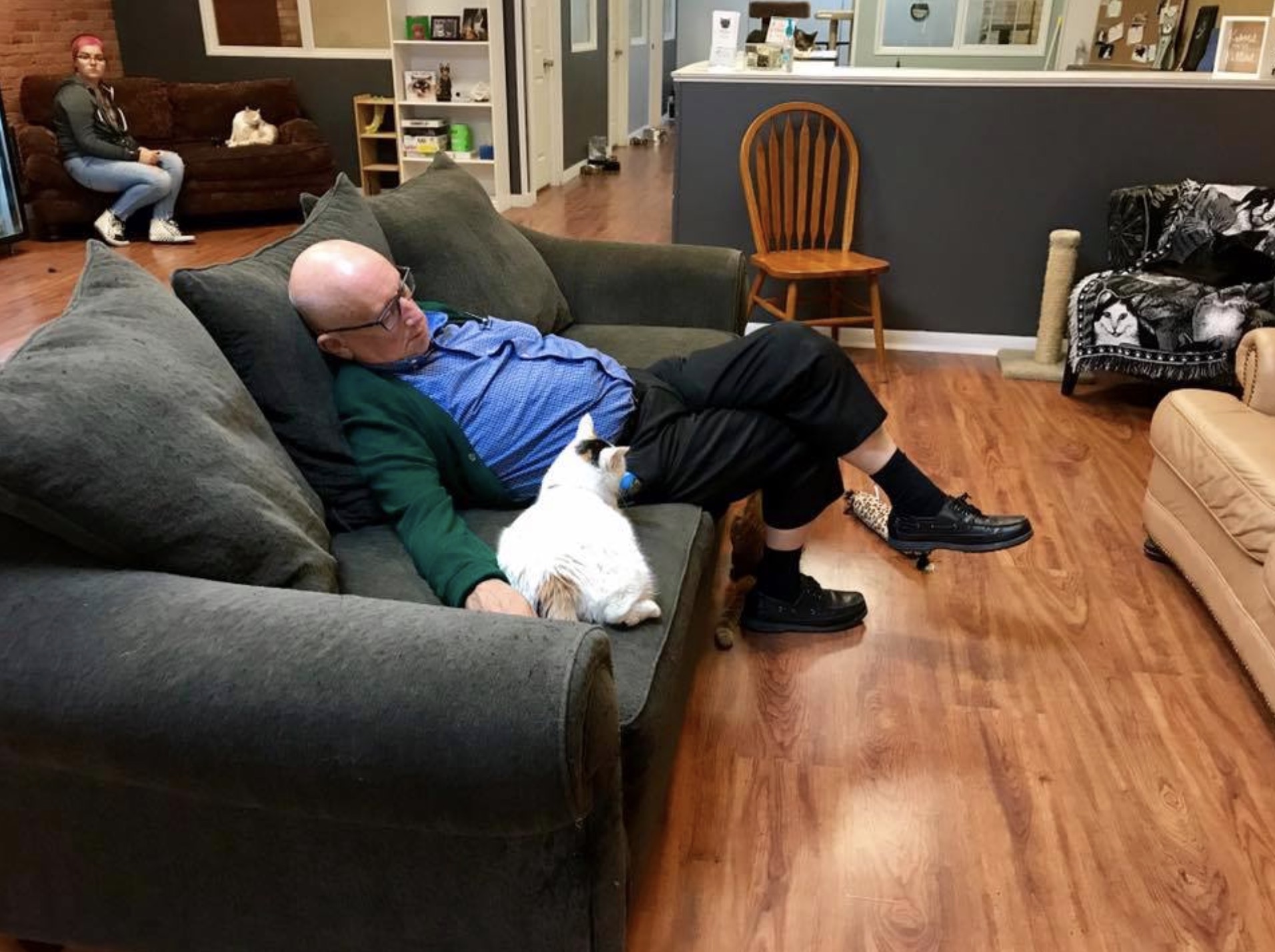 According to shelter founder Elizabeth Feldhausen, Terry, a former Spanish teacher, showed up six months ago hoping to brush the cats. “He just walked in and started brushing,” she told The Huffington Post. “So eventually we told him he was an official volunteer and had him fill out our volunteer form.” 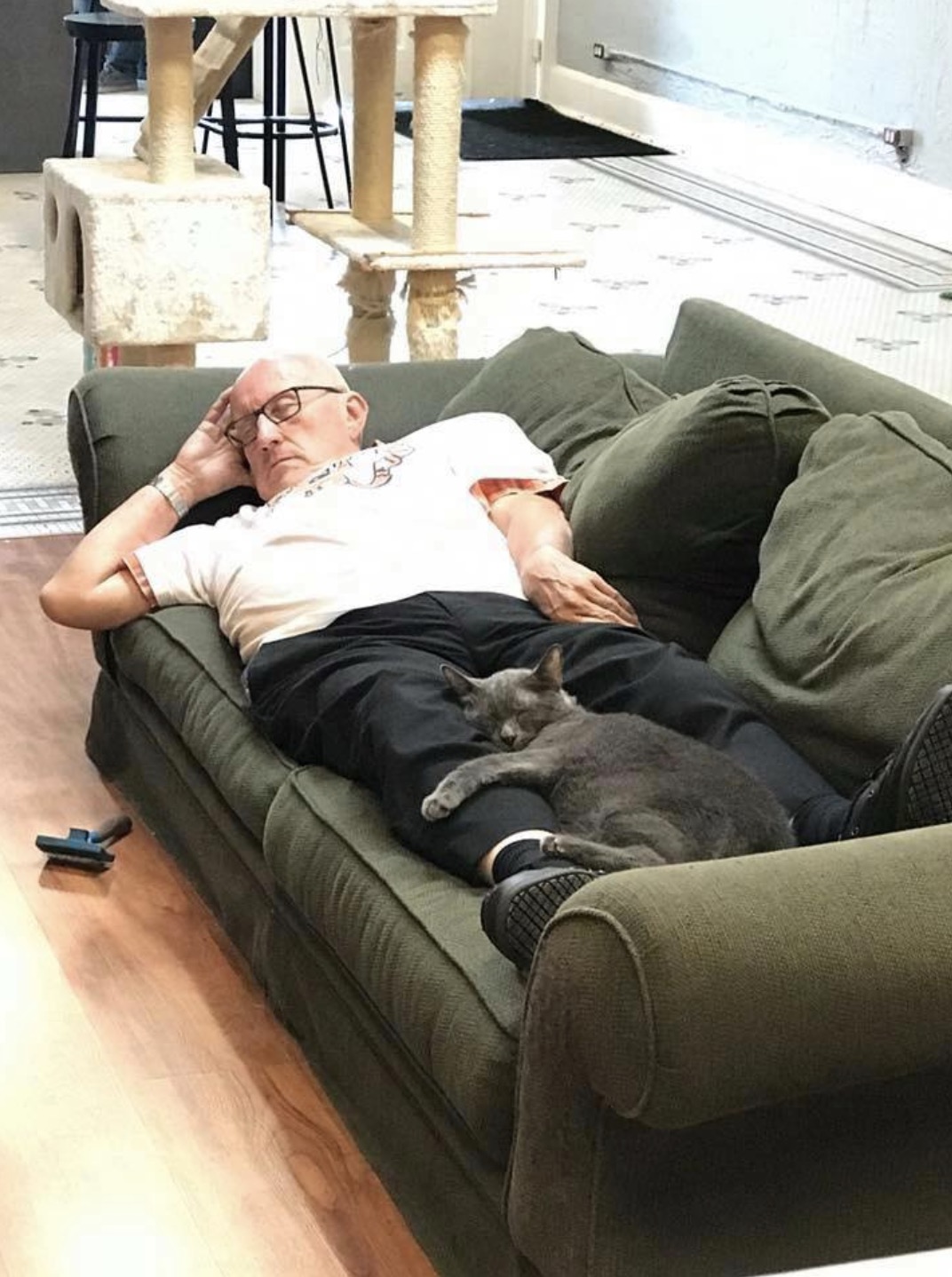 Once Terry’s paperwork was sorted, he became a fixture at Safe Haven, showing up daily to brush the cats. As anyone who’s brushed a cat knows, it’s soothing both for the cat and for the person doing the brushing. It’s easy to nod off, and soon Terry became known for his frequent accidental “cat naps.” 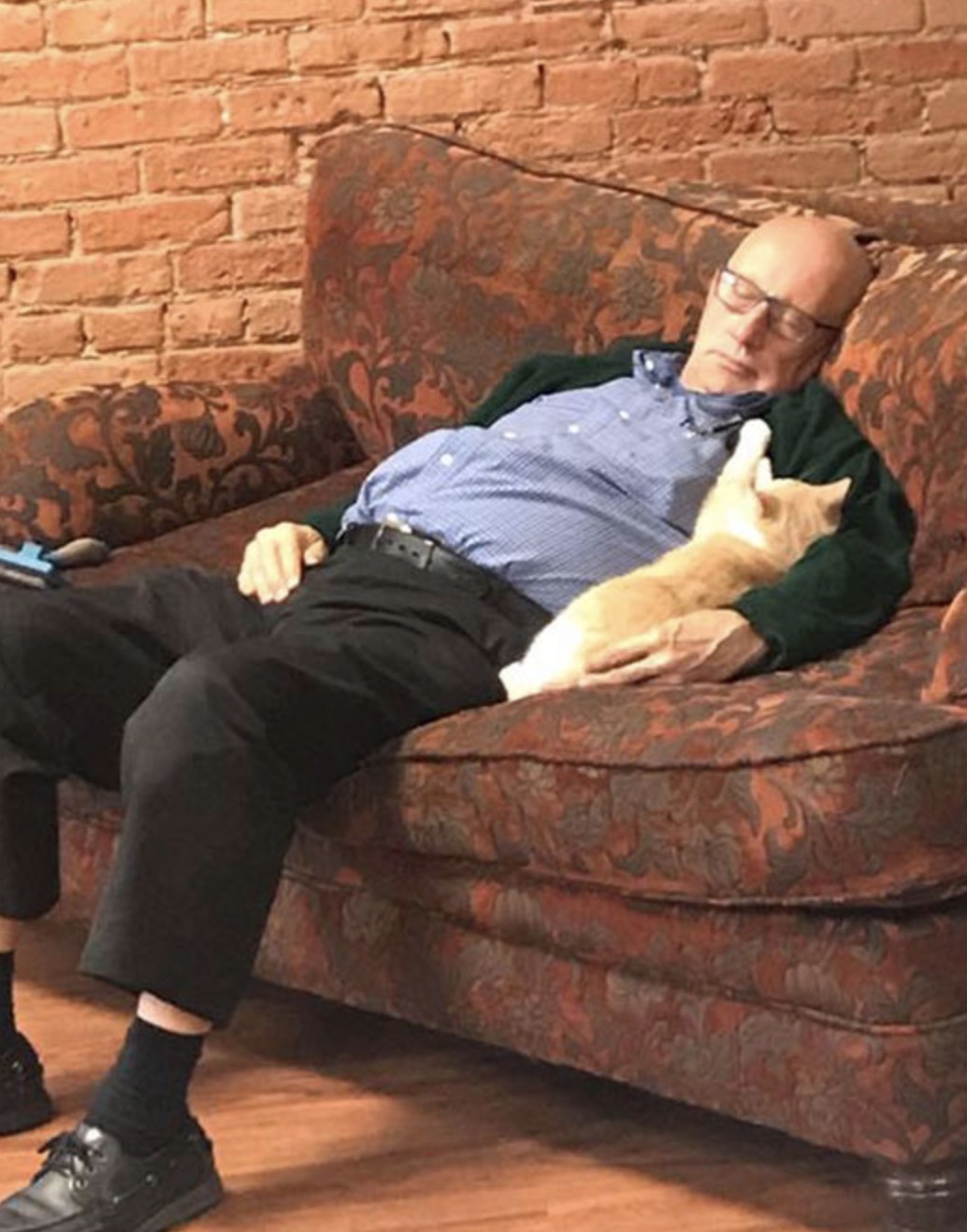 Safe Haven is a cage-free facility that rescues cats with disabilities that might otherwise be euthanized. Terry typically shows up for a three hour shift. He’ll start grooming one cat, and then he and the cat both zonk out for about an hour before he switches to another.

Here he is just two hours ago, napping with a brush still in his hand. 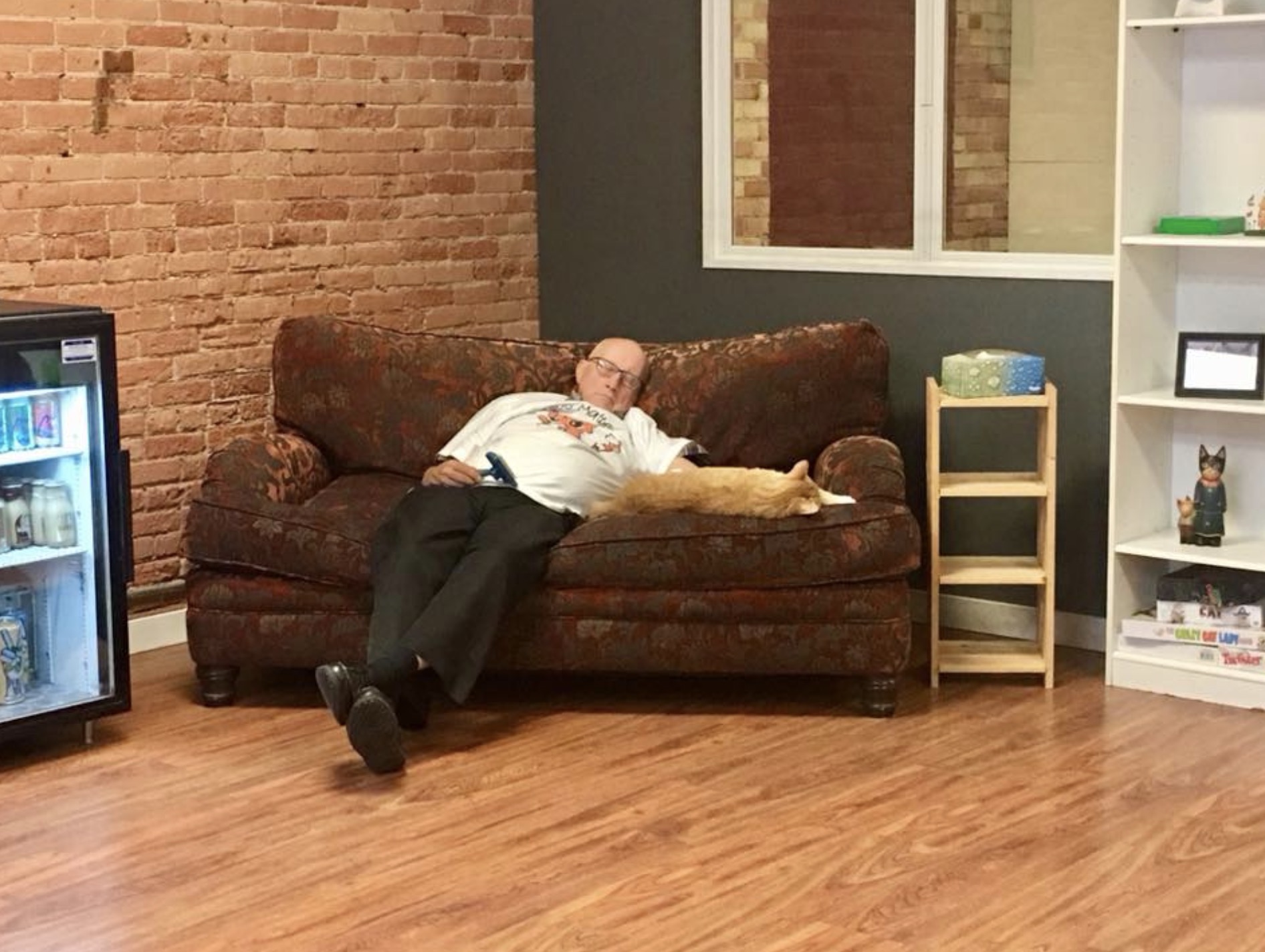 The Facebook post praising Terry went viral, for obvious reasons–have you seen anything more adorable this week? I haven’t–and it’s racked up over 72,000 likes, as well as thousands of reactions on other social media. Terry’s even got a new nickname: “Cat Grandpa.” 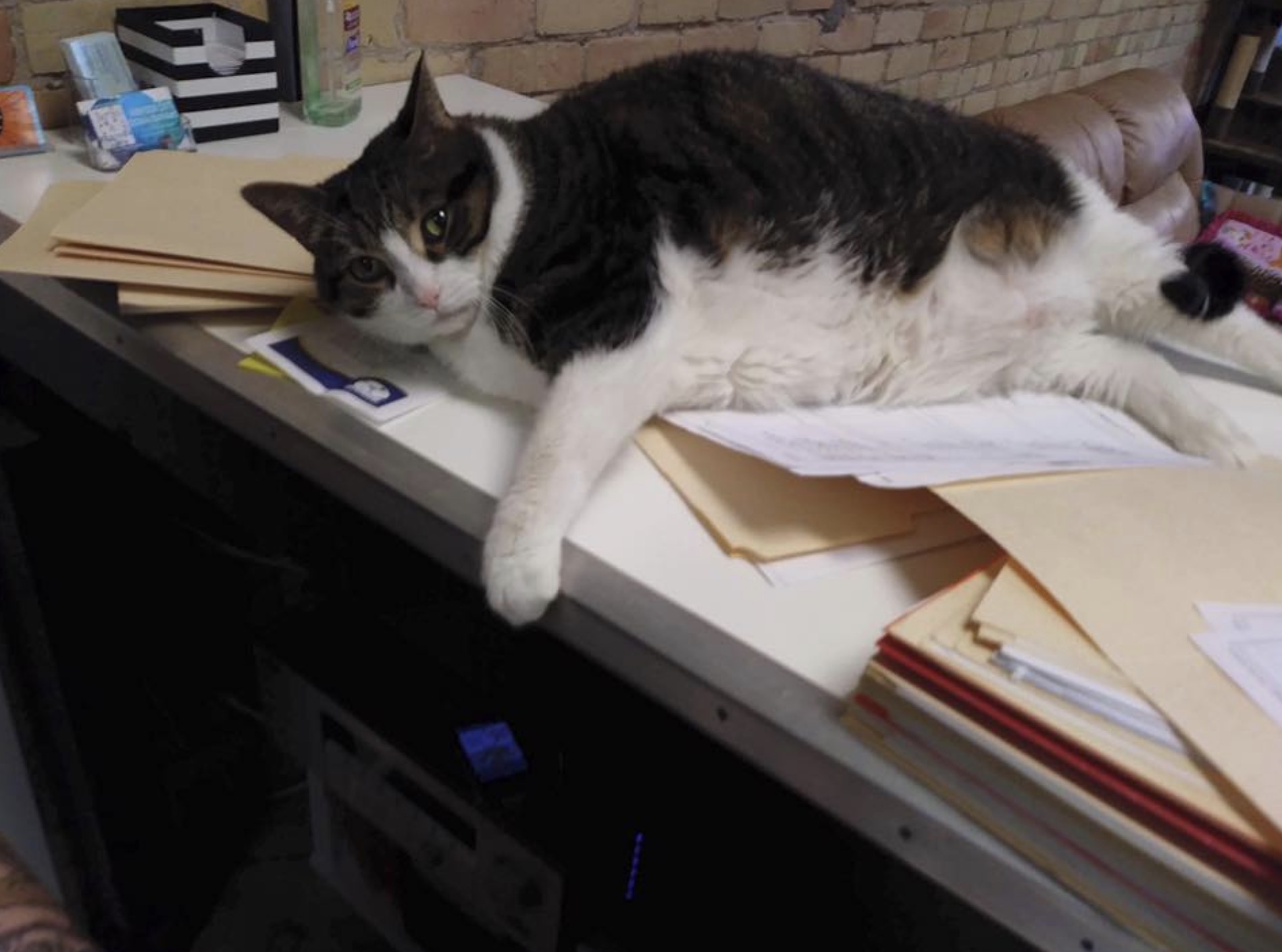 Terry doesn’t have Facebook, and he says he can “barely keep up with his emails.” When told of his newfound Internet fame,  Terry was “shocked,” but then said, “Now if all of those people would just donate $5 to help the kitties, that would make such a big difference.” 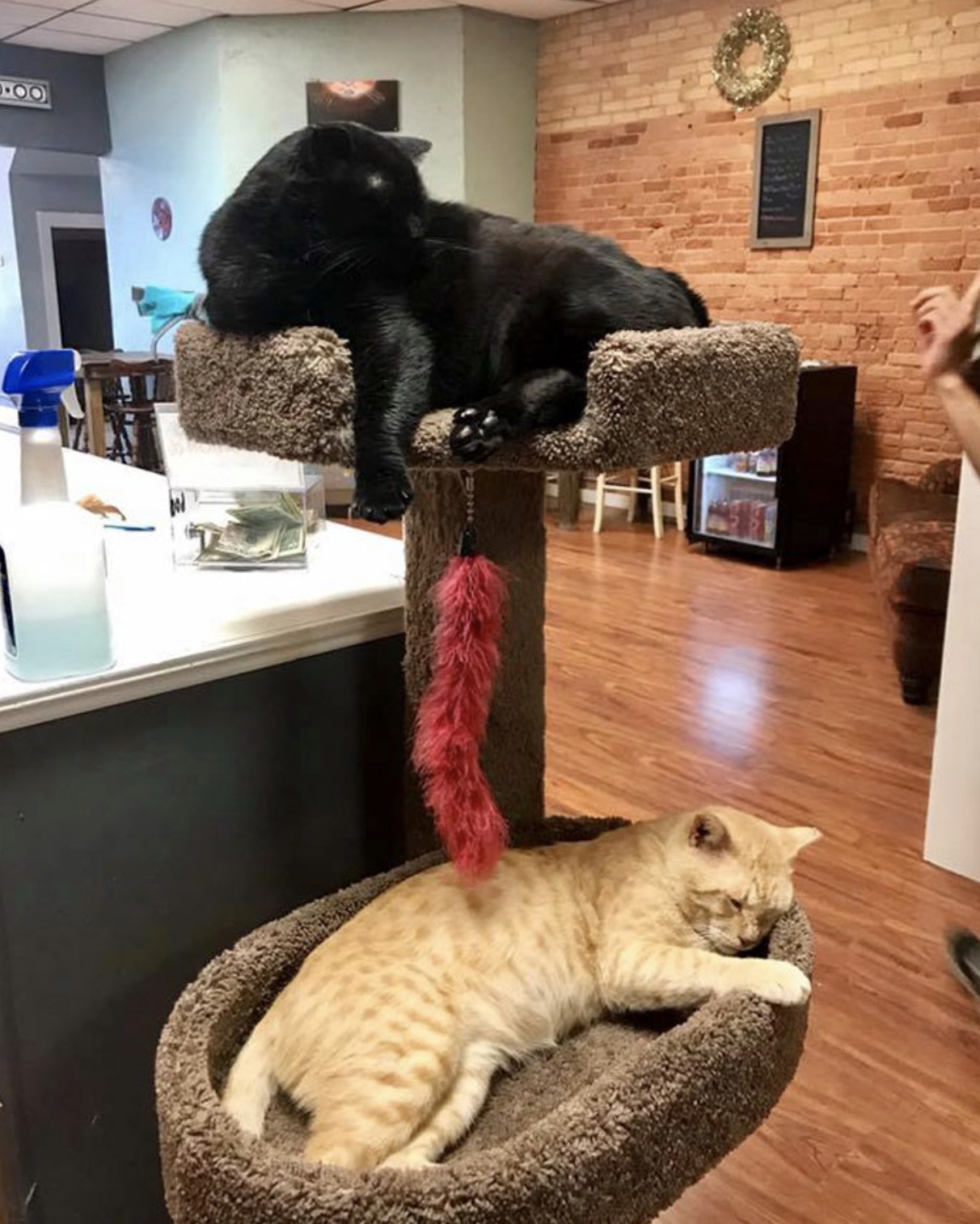 Which is pretty much what’s happened. Donations to Safe Haven have increased tenfold since the post went viral. “Normally, we’d make between $3,000-$4,000 per month,” Feldhausen told Bored Panda. “This week, we have reached $30,000! This is amazing because we do rely solely on donation!” 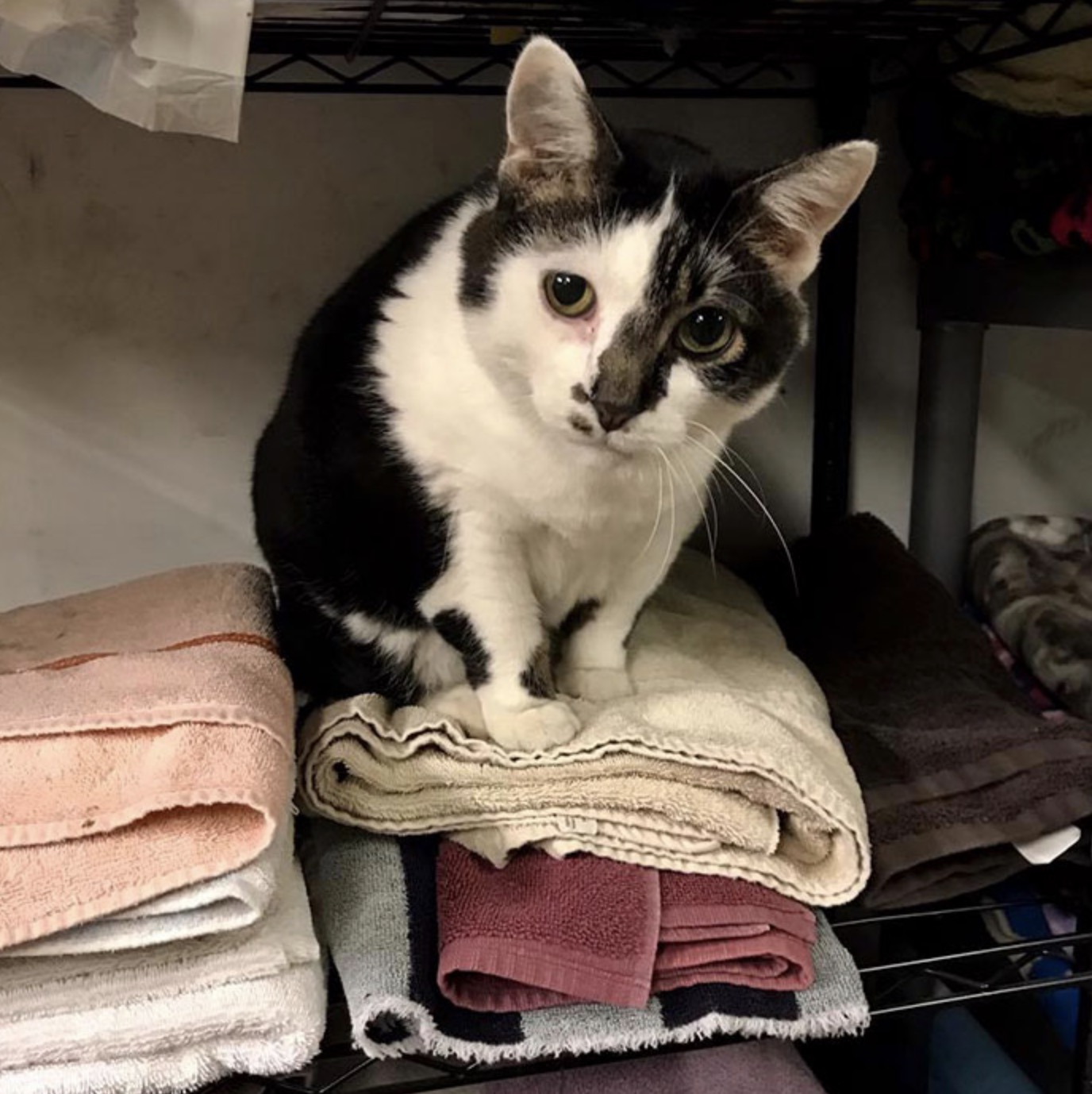 The money’s going to be used to expand and improve the shelter. “The proceeds will likely go to adding additional quarantine rooms, so that we can save more cats more quickly, vet bills, and re-insulating the building so that we are more energy efficient this winter,” Feldhausen said. “We’ll have more than enough for all of those things, so some will go to savings and be our ‘rainy day fund.’”

If you feel moved to donate, you can do so here. 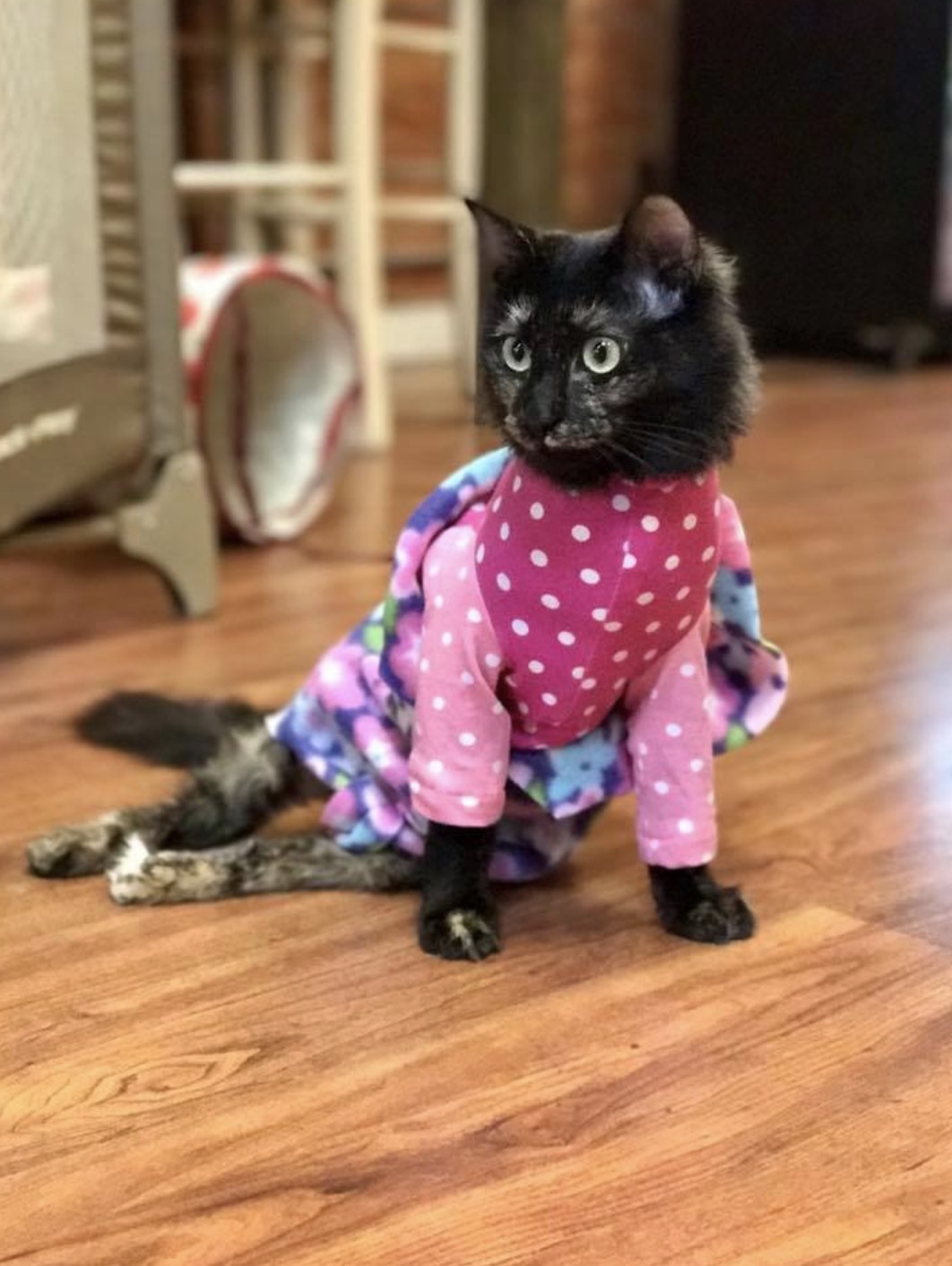 People who saw Terry’s story had lots to say about it. Lots of folks were charmed by Terry’s lifestyle. (And maybe a little jealous, too.)

Some even shared stories about meeting  Terry.

And it looks like Terry’s inspiring other people to volunteer, too.

So rock on, Terry, and everyone at Safe Haven, both human and animal alike.