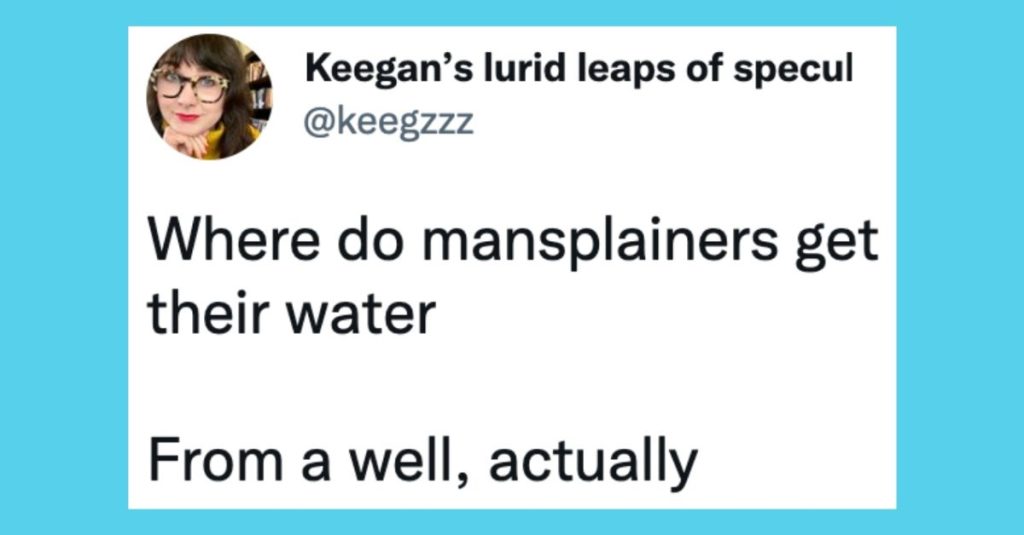 Mansplaining Tweets That Will Surely Make You Laugh

Ladies, I have a question for you: are you tired of all the mansplaining you have to put up with on a daily basis?

I bet you are!

Heck, I’m a guy and I’m sick of listening to it.

But today is the day that we’re gonna put those fellas on blast for their ridiculous behavior. Does that sound awesome, or what?

Enjoy these tweets about mansplaining and feel free to share with your friends!

1. This is all very confusing.

Okay, start again from the beginning…

2. Ouch. This person really blew it.

I wrote the f**king article!

Mansplaining winner of the day. ? pic.twitter.com/JdpVrWQx7D

3. She literally wrote the book.

This Chad fella really needs to get it together.

This is better than the time that dude tried to mansplain space to a female astronaut. pic.twitter.com/s56noeZMtY

7 tampons a cycle, 9 periods a year I am howling this man rlly tried so hard to sound smart without knowing a single (not one) thing https://t.co/DjYNbJx61H

5. The urge to mansplain is strong with this one.

Good Lord, get a life.

When the urge to mansplain is so strong you feel the need to correct a woman you’ve never met about how her late husband would have felt. pic.twitter.com/nb4t8c2RdU

6. This is hilarious and depressing at the same time.

I’m not sure which one wins out…

Look up into the sky!

Mount Rushmore is just 4 giant white dudes staring down at you. It’s like if mansplaining were a landmark.

8. I’m surprised that this hasn’t been made yet.

It would be a huge hit!

"WELL ACTUALLY": a sequel to "LOVE ACTUALLY" about why it's problematic

She really nailed this one.

Where do mansplainers get their water

From a well, actually

You’re on board with me, aren’t you?

When your impulse to mansplain is so strong you try to mansplain the Bible to the actual Pope. pic.twitter.com/Z26CUxW0CD

Ladies, have you ever had the misfortune to experience mansplaining?

If so, what happened?

Tell us your stories in the comments. We want all the juicy details!

We’d love to hear from you! Thanks in advance, my homies!