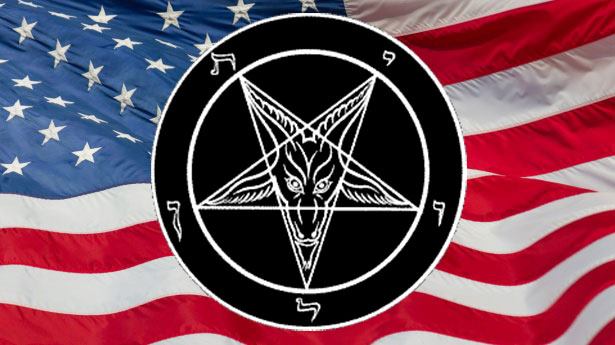 It’s Official: The United States Recognizes The Satanic Temple As A Religion

If you worship the Prince of Darkness, today’s a great day. That’s because the IRS has officially recognized the Temple of Satan as a religion, by granting it tax-exempt status. The Temple recently made the announcement on their Instagram page:

Where all my Lucifer lovers at? Can I get a “Hail, Satan!”?

As it says in the press release, getting tax exempt status isn’t just about saving money at tax time. It’s pretty much the only way an organization can legitimately call itself a religion. Since it was founded in Salem, Massachusetts in 2013, the Temple of Satan has experienced rapid growth. It now has over 20 chapters across the US, affiliate groups in Germany, Canada, the UK, and Australia, and more chapters currently seeking official approval. The Temple hopes to use its new IRS recognition to expand even further.

The road to tax exemption has been a long and winding one for the Temple. It’s not easy to be officially recognized as a religion in the US. Any organization that wants tax-exempt status cannot be for-profit, and it can’t directly intervene in political campaigns. The IRS also must determine that an organization functions like a religion–it must have a recognized set of beliefs, actual believers, and a regular place of worship, among many other qualifications.

Initially, the Temple of Satan didn’t even want tax-exempt status on principle. The Temple has always argued that all religions should be taxed. But according to co-founder Lucien Greaves, the Temple changed their minds after the signing of the “Religious Liberty” Executive Order on May 4th, 2017, which strengthened tax-exempt protections for existing religions.

Why the change of heart? Because the Temple wants to compete with other religious organizations on equal footing.

The IRS’s decision surely isn’t going to sit well with the Temple of Satan’s many opponents. By definition, atheists and religious people are opposed to each other’s views. But the Temple of Satan is one of the few subjects on which they agree. And neither side thinks it’s legit.

To Christians, worshipping Satan, aka the source of all the evil in the universe, goes against everything they stand for. And to atheists, the Temple of Satan isn’t an authentic non-religious movement. It’s just a prank designed to mess with Christians.

To be fair, the Temple of Satan was founded as a joke. And part of its mission still involves intentionally trolling the religious. But Temple of Satan co-founder Lucien Greaves insists that the Temple is very serious about its mission, which is to advocate for non-religious inclusion in theistic spaces.

Greaves is also quick to point out that the Temple of Satan meets all the qualifications of any organized religion–it has a belief system, its members meet regularly, and those members really do believe in the Temple’s teachings. According to Greaves, people join the Temple for the same reasons many join other religions: a sense of community.

And that’s good enough for the IRS.

It’s easy to picture Satanists as a bunch of goths who worship the devil, but that’s not what the Temple of Satan is all about. For starters, members of the Temple of Satan don’t actually worship Satan. Instead, they see him as a mythological and literary figure who represents rebellion against tyranny.

The Temple does not promote chaos or destructive behavior. Quite the opposite. The Temple’s seven central tenets promote a humanistic worldview that recognizes the rights of all people:

But the Temple’s main purpose is activism–or trolling, depending on your point of view. Since its founding, the Temple has filed several high profile lawsuits to fight for inclusion in spaces traditionally reserved for mainstream religions. Like when they sued the state of Arkansas to allow a 10-ft tall statue of the pagan god Baphomet to be displayed on grounds of the state capitol, alongside a monument to The 10 Commandments.

Or sometimes, they’ll just sue for headlines. Like when they sued Warner Bros. and Netflix for using a copy of the goat-headed Baphomet statue on their new Sabrina series.

Now that the Temple has secured tax-exempt status, expect more headline-grabbing lawsuits like these. And you might even start to see friends convert to Satanism. Honestly, it’s only a matter of time until you get invited to your first goat sacrifice. I’m not sure what the guest etiquette is for a goat sacrifice party, but you can’t go wrong with a nice baked dip.