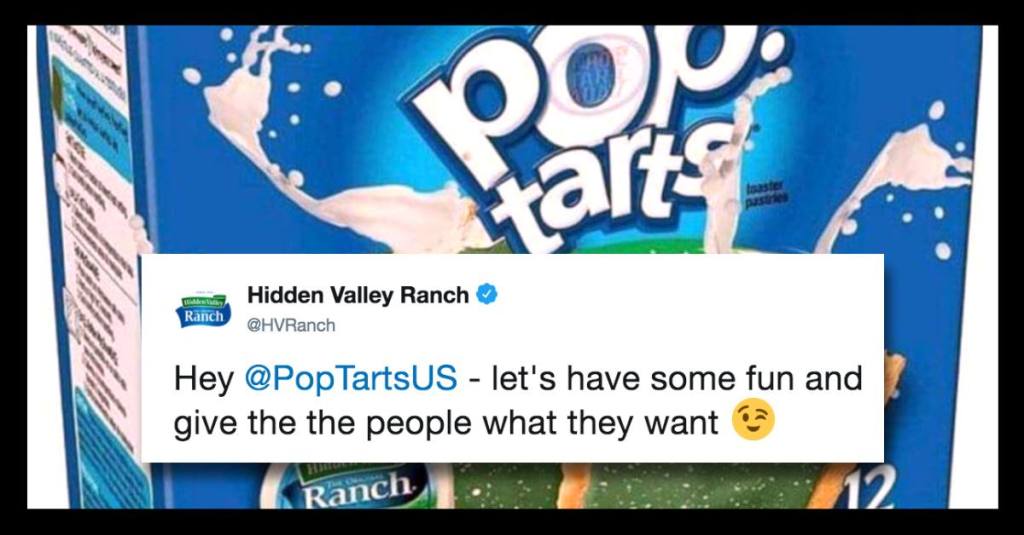 Hidden Valley Suggested A Ranch-Flavored Pop Tart, And People Have Mixed Reactions About It

Just in case you haven’t been paying attention to salad dressing news–and really, is there a better use of your time???–you might not have heard that something weird is going on over at Hidden Valley. Rather than stay in their lane and continue making the delicious ranch dressing they’re known for, the folks over at “the Valley” have been trying to sell a variety of ranch-adjacent products that barely make sense. Recently, there was the line of absurd ranch-themed beach gear, including ranch bathing suits. Because when I think “the beach,” I think “thick, cream-based dressing.” Before that, there was the Hidden Valley Ranch Fountain. You know, for all those times when you think, “Maybe this party is TOO classy.”

Every time Hidden Valley releases a new ranch-related curiosity, we wonder when it will end. But now, it looks like HV might have found the limit of the public’s tolerance for ranch tomfoolery. On Twitter, Hidden Valley reached out to Kellogg’s and suggested the two companies team up to make Ranch-flavored Pop Tarts. Behold:

Hey @PopTartsUS – let’s have some fun and give the the people what they want ? https://t.co/ULZrNEvUnG

I…just…wow. Lot to unpack here. First, the idea of a savory Pop Tart. It’s like a Hot Pocket, but worse. Then there’s the question of refrigeration. Are Ranch Pop Tarts supposed to be refrigerated, like ranch is? Or kept in the pantry with the Pop Tarts? Finally, that green icing. Is it sweet, like regular Pop Tart icing? Or is it somehow, like, celery-flavored or something, so that it goes with ranch better? I don’t know and I don’t want to know.

For their part, the Pop Tarts people weren’t interested. They did the right thing and nixed the whole idea.

Many were upset that Hidden Valley would even suggest defiling the Pop Tart in such a way.

This person had the perfect analogy for combining ranch and Pop Tarts.

Well love both individually, but much like newly divorced parents, that doesn’t mean the shouldn’t stay miles away from each other

And here’s what someone would look like immediately after eating a Ranch Pop Tart.

Lucky for us, we’ll probably never have to live in a world that has Ranch Pop Tarts, because Hidden Valley isn’t actually making them. They idea originated from @PopTartaDay, a Twitter account whose sole purpose is sharing absurd and disgusting Pop Tart flavors that are thankfully fictional. Here are several more of their offerings, in case you haven’t barfed enough yet.

Croc Tarts: made with real rubber!

Baby Food Pop Tarts. The filling is safe for babies. The rest of the Pop Tart is not.

Your baby will be crawling and crying for their new favorite pastry! ? pic.twitter.com/rHDL5xJ54p

Corn On The Cob Pop Tarts, sure to get stuck in your teeth.

And Feet Pop Tarts, for the pervert in all of us.

Ever wonder what feet pastries would taste like? Your wait is over! Grab a box and munch on all those tasty heels and toes! ?? pic.twitter.com/4CbMBt42WW

As nauseating as these are, they’re not nearly as bad as Jolly Rancher Pop Tarts, which are real, and which we still haven’t forgiven Kellogg’s for.