Everyone has something in their life that they’d like to change. And pretty much all of us have turned to a magazine or a self-help book for advice, only to end up more confused than we were already. The world is full of bad advice, and it has been for a decades. For proof, look no further than this article from a 1958 issue of McCall’s titled “129 Ways to Get a Husband: A brain-storming report on how.”

As you might have guessed, this article contains MAYBE one good way to get a husband, and 128 ways that are absolutely insane. 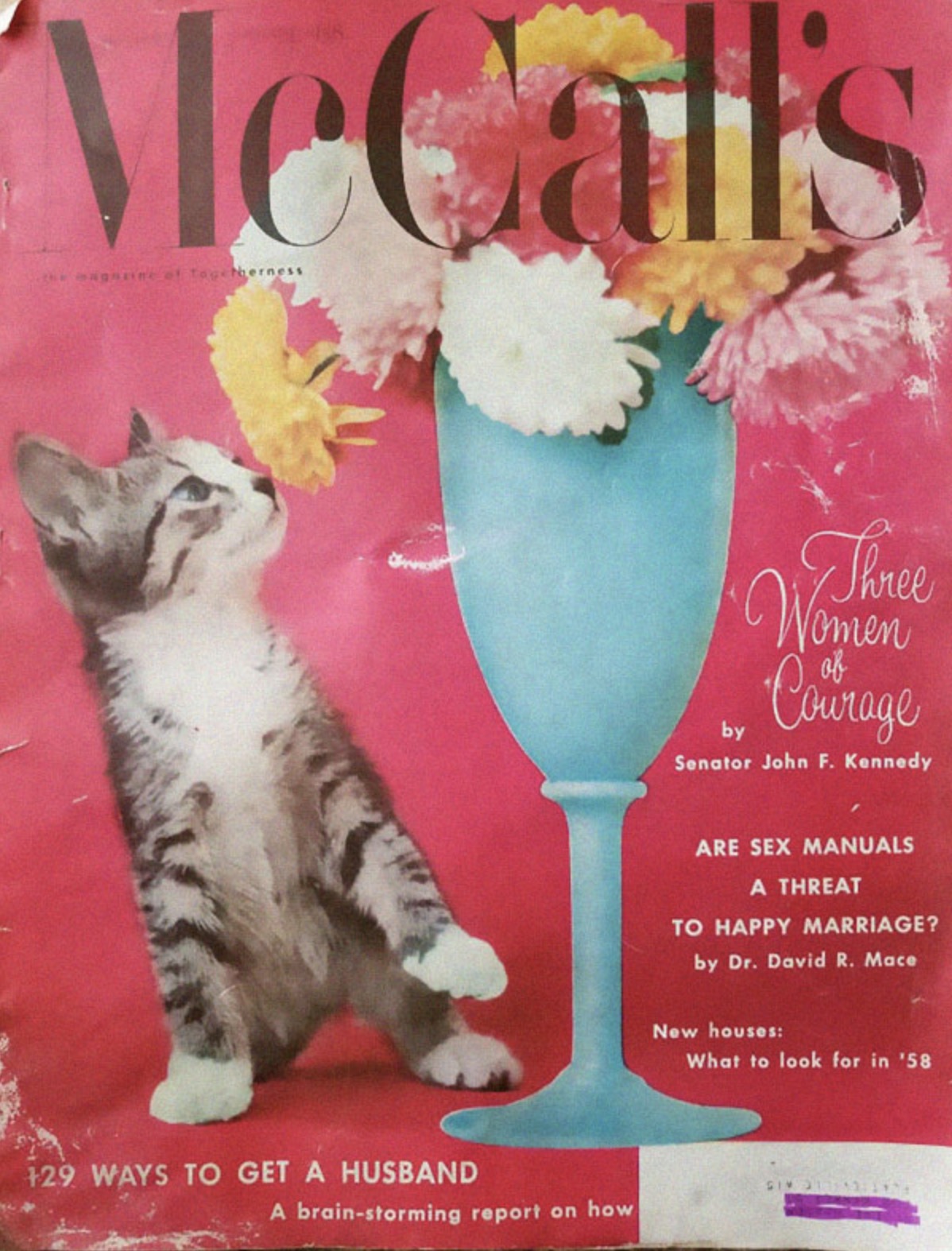 The cover gives you a pretty good idea what to expect overall when you notice another article in this issue, “Are Sex Manuals a Threat to a Happy Marriage?” by Dr. David R. Mace. Could you imagine a more 1950’s-sounding article than that? I’m so glad Dr. Mace took time out of his busy 1950’s doctor schedule of recommending cigarettes for babies.

Anyway, the reason we’re talking about a women’s magazine from the late 50’s is because a Facebook user named Kim Marx-Kuczynski recently unearthed it at a yard sale. After Kim shared choice passages from the article on social media, the article went viral.

“I think the article is reflective of the social mores of the era,” Kim told Bored Panda, “And I found the comparison between what was acceptable then and what is acceptable now fascinating. It also made me grateful that so much progress has been made.”

Below, you can check out how a 1958 McCall’s thought women should go about finding a man. What do you think is the worst piece of advice? Or, are you willing to give a few of these tips a try? Let us know in the comments!

Part 1: Where To Find A Man

The article starts with some tips on how women can physically locate an eligible bachelor. Which makes sense! The available man is one of nature’s most elusive creatures, like Sasquatch or the Loch Ness Monster.

Right off the bat, this list is all over the place. Some of these tips are perfectly reasonable, like joining a hiking club. Others range from wildly impractical–moving to NEVADA?!–to straight-up psychopathic. Pretending to have car trouble is literally what serial killers do.

And this is just within the first five tips.

How would that work? “Say, fella. We’ve never met but I heard your wife died yesterday. Coffee?”

OK, so I’m not going to have a comment for each and every one of these tips, because there are 129 of them and I would die. Also, we’re only at #13 and it feels like they’ve already run out of ideas.

But if you wanna see the whole list and are a masochist, check out the bottom of this article.

The only reason to be a good person is to manipulate people into getting what you want. So empowering!

Even better, pretend like you have amnesia! “Who am I? How did I get here? Why am I covered in blood? And why is it horse blood?” Guys love a mystery.

Was some editor like, “Hey Jerry, the sexism in your article isn’t overt enough. Can you make it even more obvious?”

Janet thought she had a date with a handsome fisherman all lined up, until she accidentally put a fishhook in his eye.

Again with the widower stuff! This article is like two minutes away from recommending murder.

Women’s magazines: trying to break your self-esteem for over 60 years!

“Ugh, Beth is such a downer with her ‘clinical depression.’ No wonder I can’t find a boyfriend.”

This is also good advice in case you’re on the run from the mob.

Now that we’re all thoroughly confused, it’s time to move on to the next section…

Part 2: How To Let Him Know You’re There

Once you’ve found a man, here are some tips on how to approach him. You will not be surprised to learn that “Walk up to him and introduce yourself” appears nowhere on this list.

Because if there’s one thing men love, it’s a slapstick comedy. If this doesn’t work, try falling down a flight of stairs, or throwing yourself in front of an oncoming bus!

“Oh, that’s a cold sore. Just found out I have herpes. Coffee?”

Part 3: How To Look Good To Him

And it wouldn’t be an advice column without plenty of messed up tips on “improving” your personal appearance.

Even if you don’t find a husband, you’ll still have your alcoholism!

Try wearing a wolf costume. Walk up to your love interest, loudly announce, “I AM THE SHE-ALPHA” and then lift your leg and douse him with your urine. And then he’s yours!

Wait, what? Was this article written secretly written by a melanoma?

So, don’t do anything you feel is wrong. But also, don’t speak up about anything. Don’t see anything contradictory there!

Husbands are for closers, ladies! Once you’ve gotten a man’s attention and piqued his interest, it’s time to seal the deal…

Have comfy chairs, ladies! Don’t invite him over to sit on your concrete floor that’s covered in broken glass.

The next issue of McCalls

Is this seriously a thing women were doing in the 1950’s? That decade was WAY different than I thought.

It helps if you point this out while casually revealing the gun in your purse.

And finally, we arrive at the 5th and final section of the article, which could also be called, “WHY DID MY EDITOR MAKE ME DO 129 OF THESE!”

You can feel the author’s desperation mounting and mounting. By #114 he’s straight-up stealing I Love Lucy storylines.

This one is just dangerous. How many plane crashes did this article cause?

A little drowning is a small price to pay for love.

That’s crazy person behavior. Why not pretend to have multiple personalities, too? There’s a good chance he’ll fall in love with one of them!

That’s how my parents met!

This is actually good advice. If you go on a bad date, you can return to his house later, steal his car, and sell it for scrap as compensation for lost time. Respect the hustle.

I…don’t…why? Why is this happening? 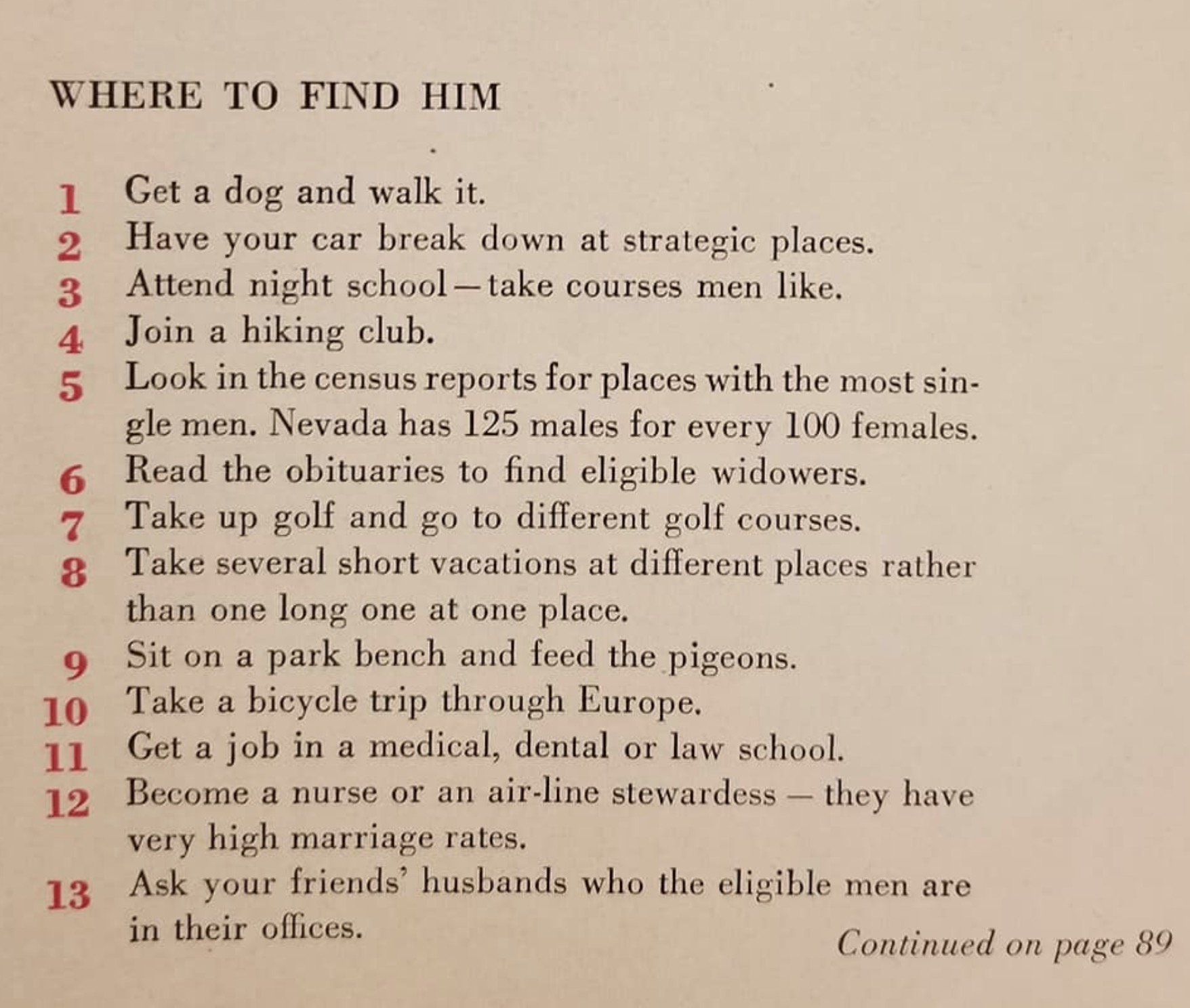 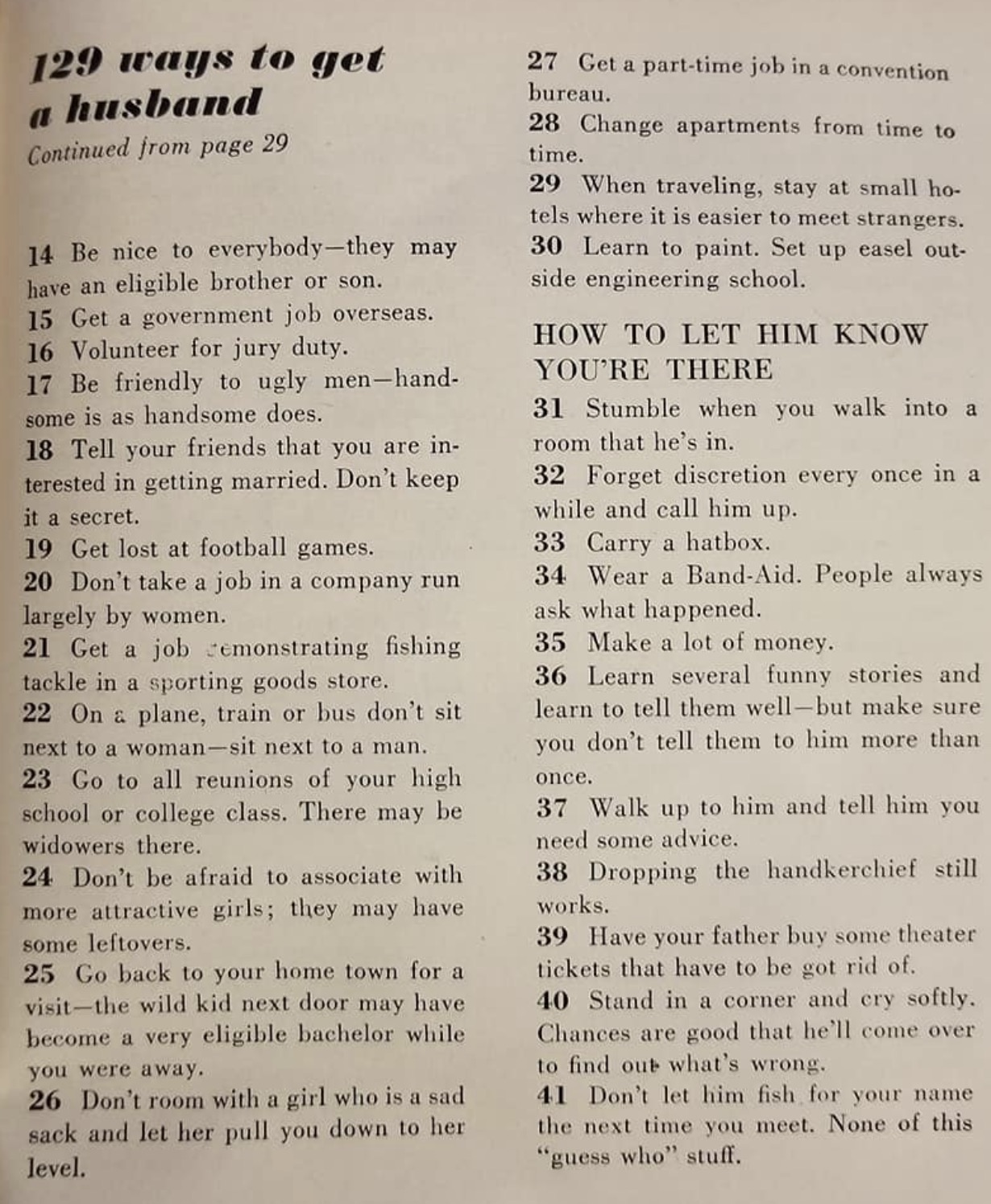 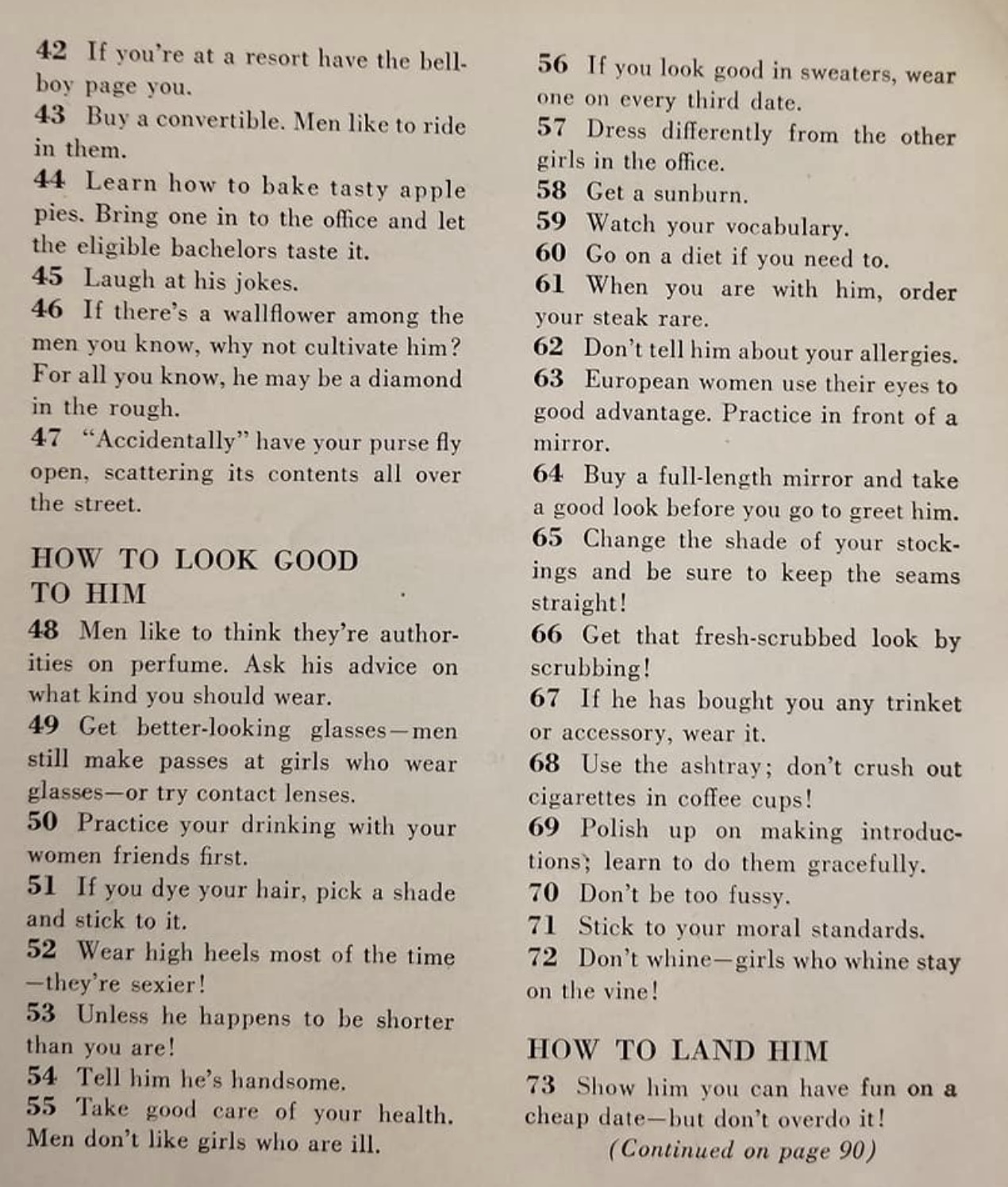 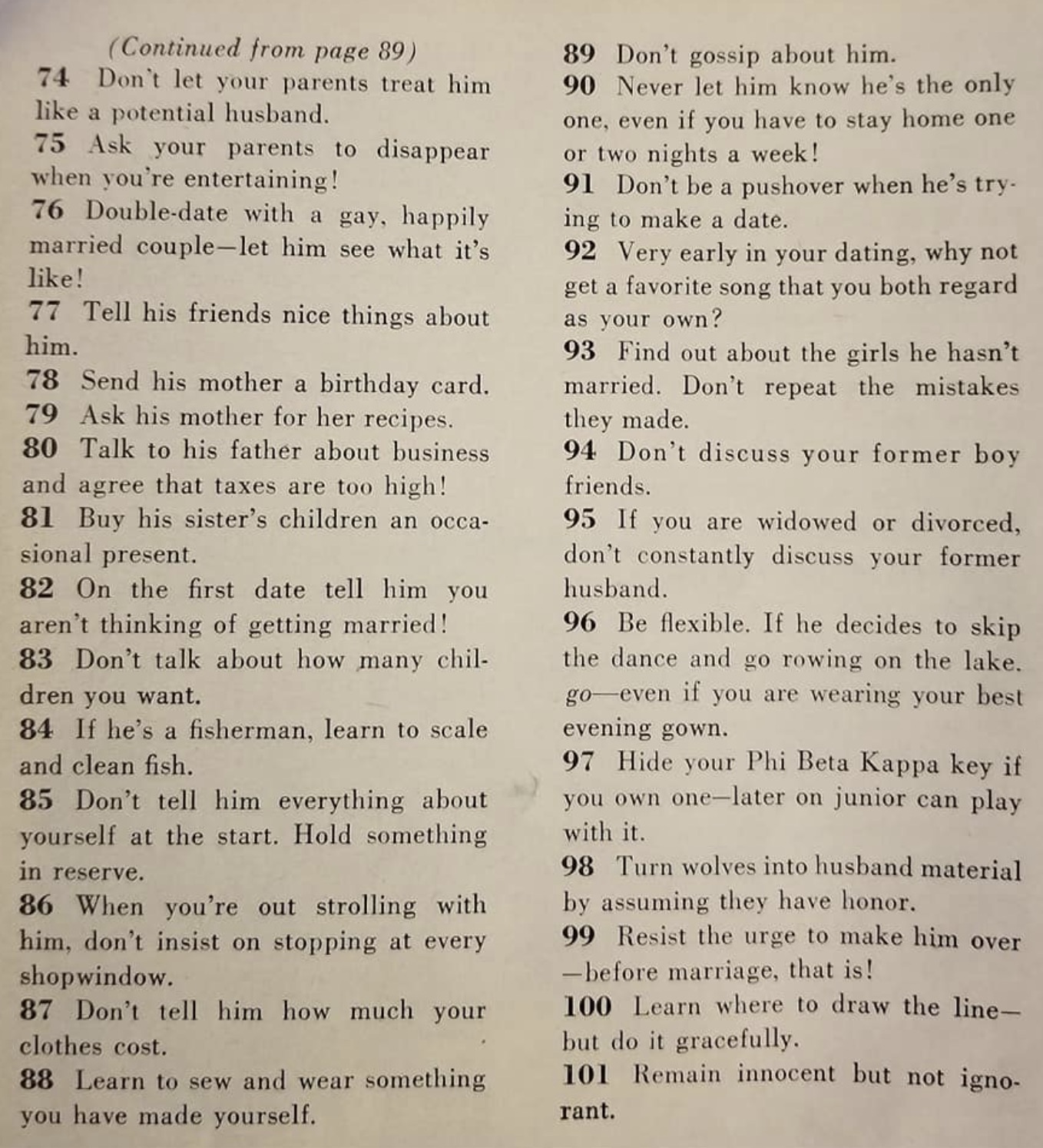 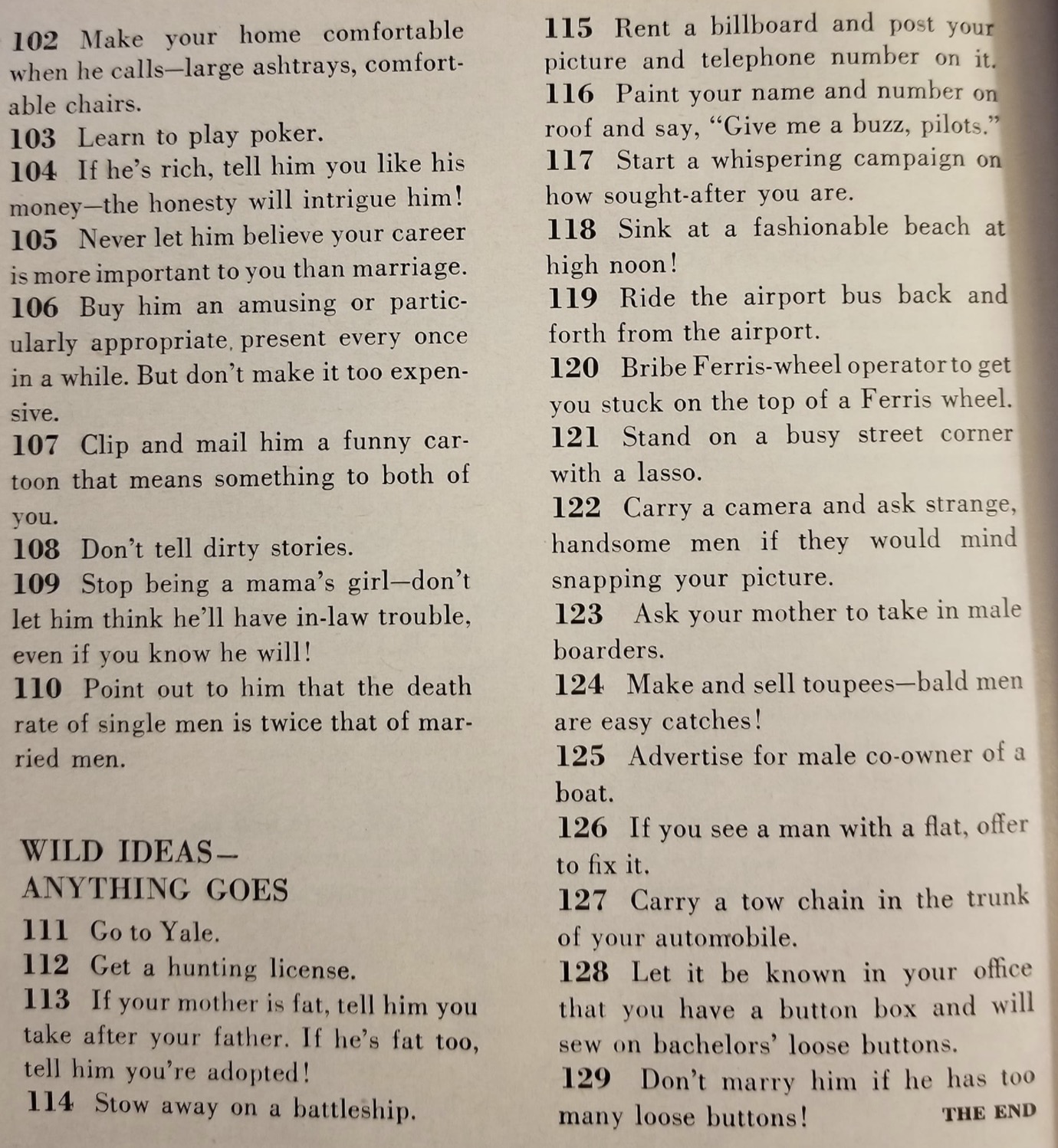 If there’s one takeaway I want you to have, it’s this: magazines used to have way fewer pictures.