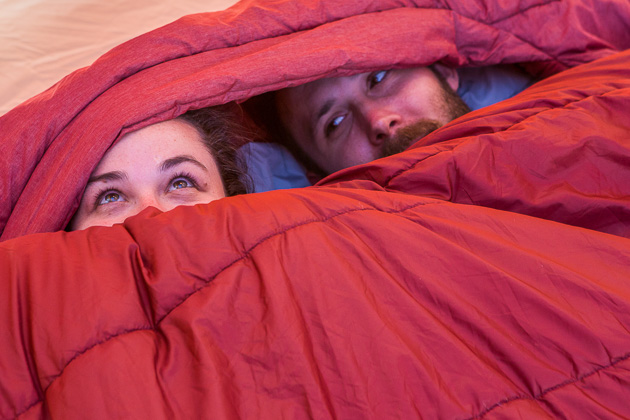 Guy Weirds out Girlfriend with His Bed Sheet Substitute

Dating has many perks, but maybe the best perk of all is getting to learn your partner’s weirdest habits. The kind of stuff they prefer to hide from everyone else in their life, for good reason. Like how they enjoy drinking freshly chilled pickle juice straight from the jar. Or how they re-enact entire Kids in the Hall sketches in the shower. (No, those aren’t based me. Why do you ask?)

The flip-side of that perk is learning that YOUR habit, the one you thought was perfectly normal, is actually completely crazy. And that’s what happened to a 23-year-old Reddit user who recently posted a question about his new girlfriend on the r/relationships thread.

Here’s his question in full:

I started seeing someone a few weeks ago. Things are going great all around. She’s really kind and funny. I couldn’t be happier.

So yesterday, for the first time, she came to my place for a few hours. It’s a new place I moved in a few months ago. Everything went well and stuff but something strange happened when she saw my bedroom.

See, quite a few years ago(when I was still at my parents’), my blanket was worn-out and we had to buy a new one. For a few nights, while waiting for a replacement, I slept in a sleeping bag we had.

I actually really got used to it and it was very comfortable all around so I decided to keep sleeping in it. It’s an amazing sleeping bag : warm, soft, fit. And I sleep VERY well in it so I saw no reason to change it. So when I left my parent’s place, I, of course, took my sleeping bag with me.

Let’s pause for a second and wonder why his parents never told him to get himself some big boy sheets. Come on, Mom and Dad!

Anyway, when my new girlfriend saw my sleeping bag, she was definitely taken aback. I explained it to her and we had a good laugh.

At this point, he thought it was over. Poor kid.

But afterwards, when we were playing video games, she kept making weird comments about my sleeping bag. Like, she wasn’t too obvious about it but I could feel her being a bit uneasy about it for some reason?

She said things like “You might want to buy new blankets. You’ll sleep better”. I assured her a few times that I slept splendidly but she kept insisting for some reason. She added “Beds are meant to have blankets, not sleeping bags!”. She even said “Yes but you aren’t camping here. You really should get new blankets. I can buy them for you if you want”. I declined of course and repeated that it was just something I’m used to by now and wasn’t really keen on changing it. Nevertheless, I did say I would think about buying new ones and she flashed me a great smile.

I really don’t know what to think though. Now, I feel like the one weirded out. I’m very clueless at her reaction to my sleeping bag.

What could possibly be her problem with my sleeping bag? I mean, I really don’t get it. Why would she care so much about what I sleep in? She’s definitely not a controlling person so this felt really out of character from her. I didn’t have tons of relationships so I’m not sure what to do.

OK! Seems like a pretty cut-and-dry issue. She’s not into the idea of sleeping in a sleeping bag on top of a bed. So, he just needs to get some sheets and he’s good, right? Well, there’s a complication…

I really don’t want to get rid of my sleeping bag. We went through a lot together. Buying a new blanket feels a bit like I’m betraying it.

I guess I could use an outside perspective from you guys. What do you think?

If you’re torn because you have to choose between a real human person and a SLEEPING bag, you MIGHT have bigger issues than the people of Reddit can help you with. But for now we’ll set that aside. r/relationships is an advice forum, after all, and Redditors had plenty of it.

This one got right to the heart of the issue:

This one suggested a compromise:

This one tried to help him understand that the sleeping bag is going to be an issue with most women:

This one brought up the always important hygiene issue:

But most people just tried to knock some sense into him:

We don’t know what happened between the young lovers, but I’m hoping they were able to work things out. Just think of the story they’d tell their grandchildren: “I knew your grandpa was the one when he chose me over a piece of camping equipment.”