When you’re in a long-term relationship, you’ll be surprised by how much your partner can surprise you. It’s impossible to know everything about another person–no matter how long you’ve known them, there’s always something new to learn. One day you might discover your girlfriend has a hidden talent for making gazpacho. Another day, you might find out your boyfriend has perfect pitch. And another day, you just might discover your girlfriend has been wiping herself with your gym socks.

Being single never looked so appealing! 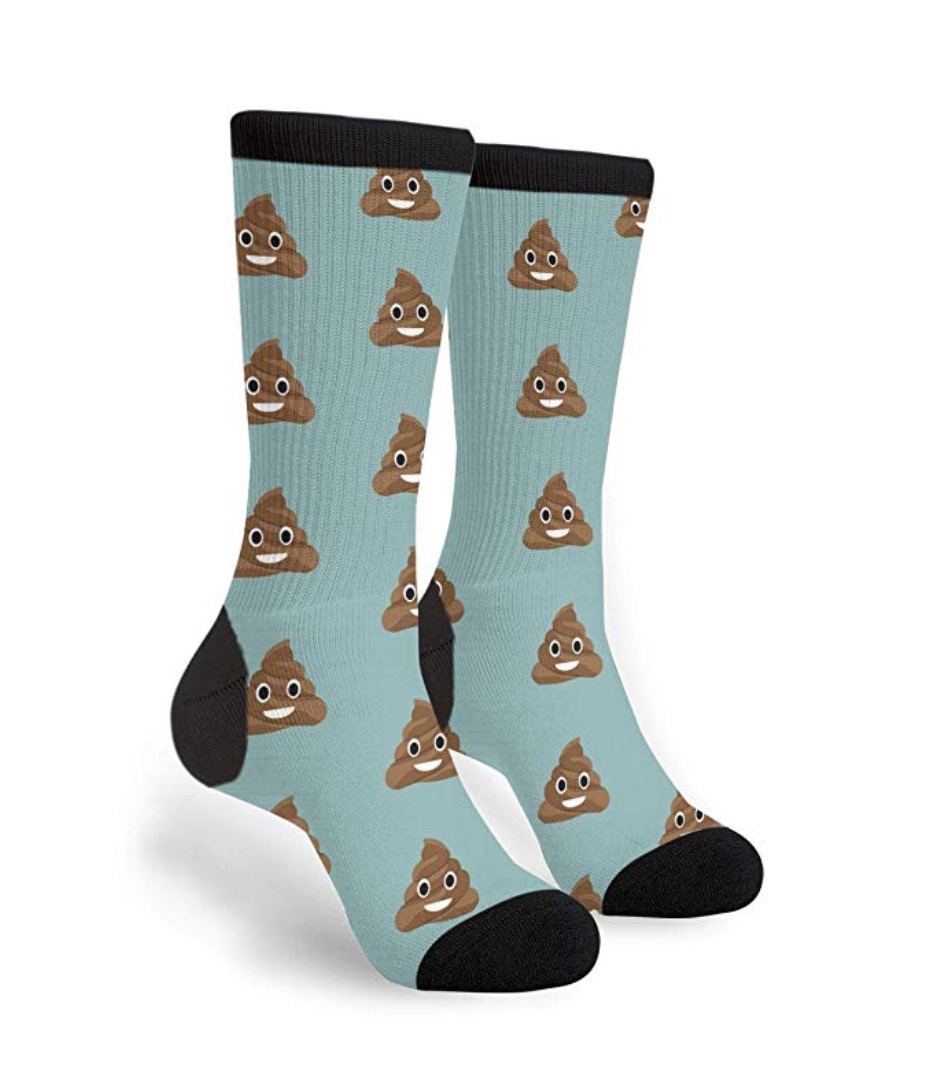 It might sound unbelievable, but apparently this really happened to Redditor u/whattodobedroom. This week, he posted a query on the r/relationship_advice subreddit that had what might be the greatest title the Internet has ever seen:

“I (28) think my girlfriend (26) has been using my gym socks to wipe after going to the bathroom.”

I mean, how do you not click on that?!

In the post, u/whattodobedroom (who I’ll now refer to as WTDB) provided a lengthy story, full of details. Recently, WTDB and his girlfriend moved in together. After the move-in, WTDB’s girlfriend began behaving a bit strangely, but at the time it didn’t seem like much to worry about…

I live a pretty normal life, and I thought so did my girlfriend. We’ve been together for a few months and after things got serious, we moved in together. We started sharing a lot of the household responsibilities, but the one thing she was adamant on doing was the laundry. She would come home and find me in the bedroom getting the laundry together and would quickly ask me to go do something else. I’d come back to finish the laundry and she would have already started it. I always thought it was sweet and never her job to do it alone, but hey, if it makes her happy to do it all the time, I wouldn’t stop her.

Endless free laundry service? Sure! Who wouldn’t want that? But one day, WTDB noticed his socks were going missing.

This is where it takes a turn for the weird. I keep all my socks and underwear in the bottom drawer of my dresser. I also go to the gym frequently, so I always keep a good supply of clean gym socks ready to go. I never kept count, but I know by just a visual glance I several pairs. This morning when I went to grab a fresh pair to pack for the gym, I noticed there were several dress socks, but no gym socks.

At this point, it still didn’t seem too weird. We all lose a sock in the laundry sometimes, right? WTDB investigated.

I went to check the laundry basket and it was empty, so I checked the washing machine and dryer. Both were empty. I couldn’t figure out where all of my gym socks had gone. So, I did the very natural thing of asking my girlfriend what had happened to them. After all, she is the one who does the laundry all the time. She went silent, turned red and ran out of the room.

Uh-oh. WTDB followed his girlfriend to get an explanation.

When I went after her to see if she was okay she wouldn’t talk to me. I told her I wasn’t mad, I was just looking for my socks. She kinda mumbled “I’ll don’t know.” I still wasn’t mad, of course, but I was super confused. Socks just don’t disappear. So I asked her again, even laughed about it and she just looked at me and got mad and said “I’ll buy you new ones!”

But the more he pressed, the worse it got.

The first thought that went through my head was she had somehow managed to destroy my socks while washing them. I thought the sight of that was actually pretty funny, so I joked with her about ruining my socks. Wrong. Thing. To. Say. She started immediately crying. Like, full on sobbing. At this point I don’t care about the socks anymore, I want to know what’s wrong with my girlfriend. I sat down next to her on the bed and put my arm around her and asked her of she was okay. She just kept saying she was sorry and that she would buy me new socks. I tried assuring her again it was okay. Even went so far as to say I would buy new socks and she didn’t have to. I sat with her for a few minutes trying to calm her down and eventually had to get ready for work.

Hmmm. Even if you did destroy all your boyfriend’s socks in the laundry, you wouldn’t get that upset about it. They’re just socks!

WTDB left for work. But outside, he made a shocking discovery.

On my way out I grabbed the garbage to take outside. When I got outside I lifted the lid off the garbage can and I noticed a small plastic bag sitting on top of the garbage already in there. I could see through the bag (kind of the semi see through ones) there were socks in the bag. Since I was sure she had somehow managed to ruin the socks washing them, I wanted to see for myself. I opened the bag and immediately regretted my choice. There, inside the bag, were several pairs of my gym socks covered in what looked like poop. As soon as the smell hit me I knew it WAS POOP.

Aha! WTDB decided he couldn’t go through with his work day with this question hanging over his head. He went back inside to squeeze out some answers from his girlfriend.

I grabbed the bag and walked back inside. As soon as my girlfriend saw the bag she flipped out and started yelling at me. She said I shouldn’t be going through the garbage and that I was disgusting for bringing it back into the house.

Nope, doesn’t sound guilty AT ALL.

I asked her to calm down and [said] that I just wanted an answer as to why there was poop on my socks. I wasn’t blaming her of anything, but she started accusing me of blaming her. That’s when it clicked. I don’t know what it was that lead me to ask this, but everything leading up to this moment had just been so crazy. I asked her “Is this your poop?” She started sobbing again and ran out of the house. I didn’t go after her this time.

Hopefully he locked up all his tube socks.

So, now I am sitting on my bed with a bag a poopy socks on the floor and a lot of questions in my head. The only conclusion is that she used them after going to the bathroom. Which that alone has its own set of questions above everything else. I sent her text asking her to come back. She hasn’t responded yet. I don’t even know what I’m going to say when (IF) she gets back.

Originally, this was the end of the story. As you can imagine, people went nuts. Did WTDB’s girlfriend just decide to bail on her life entirely? Abandon all her possessions, change her name, move to a new city, possibly to an apartment near a Hanes factory? Who could blame her?

But no! WTDB later returned to the post with an update.

I had to leave for work and am now at work. Yes, I threw away the bag of poopy socks. She texted me back and she’s clearly embarrassed, but felt she owed me an explanation. She said she didn’t want to talk about it in person and that we could discuss it over texting and to NOT bring it up in person.

Do you think Steve Jobs would’ve invented smartphones if he knew this is what they would be used for?

I flat out asked her if it was a fetish.

We were all thinking it!

It is not a fetish.

She confessed to using the socks after going to the bathroom. I found the reason she always does the laundry is because she was hiding the fact that she uses socks to wipe with, primarily her own. I had no reason to question the amount of socks she ever has because who pays attention to that kind of thing? She thought I would notice and think it was weird since she doesn’t own many socks. She admitted she has done this for a long time.

Her reasoning, as best as I can understand, is that because she is a germaphobe (her word) and she is afraid toilet paper will tear and is afraid of getting her hands messy in ANY WAY. She uses socks because it covers her entire hand. After she’s done with them, she throws them away. She used mine because she didn’t have other socks.

The truth comes out!

So, my girlfriend has a fear of getting poop on her hands so she wipes with socks, and has done so for a lone time. It could be worse, I guess. I hope we can laugh about this later. I’m trying to find the humor in it now, but I’m still weirded out.

Aw man! I feel bad for her! Don’t you? Maybe using your boyfriend’s socks as toilet paper wasn’t the best move, but germaphobia is for sure difficult to deal with. We all have a personal quirk that would be difficult to explain to another person. We don’t know WTDB’s girlfriend’s history, but if this is her first time cohabiting with a partner, the wiping issue must have been hanging over her head the entire time. She had to know the truth would eventually come out one way or another. Imagine the fear! The guilt! The stress! Normally going to the bathroom brings relief, but in her case it only upped the pressure.

It’s like being the poop-sock equivalent of Walter White. (Walter Brown?)

But if you remember the beginning of the story, this was posted on an advice forum. WTDB’s post received almost six thousand comments. Many focused on practical solutions that would let WTDB’s girlfriend could wipe without worry…

There has to be a better way.

Others focused more on the underlying causes of her toilet paper aversion, like this person claiming to be a therapist.

But this isn’t just a bathroom issue or a mental health issue, it’s also a relationship issue. People had advice for WTDB on that front, too.

Thus far, whattodobedroom has not updated his post with how he and the girlfriend are doing. We hope they’re able to move past this obviously very upsetting relationship hurdle. If they’re lucky, one day this will be a funny story they can tell their grandchildren. They can even keep the sock as a memento.

20 Memes That Will Appeal to Your Petty Side
14 Funny, Stupid Jokes That We Hope Make You Laugh
15 Of The Funniest Responses To The “Text Your Boyfriend ‘I Want A Baby'” Challenge
15+ People Who Deserve a Nobel Prize in Food…If That Exists
Memes for Those of Us Who Know Beach Bods Are Overrated
Mom Thought “Furry Convention” Was for Dogs, and Hilarity Ensues