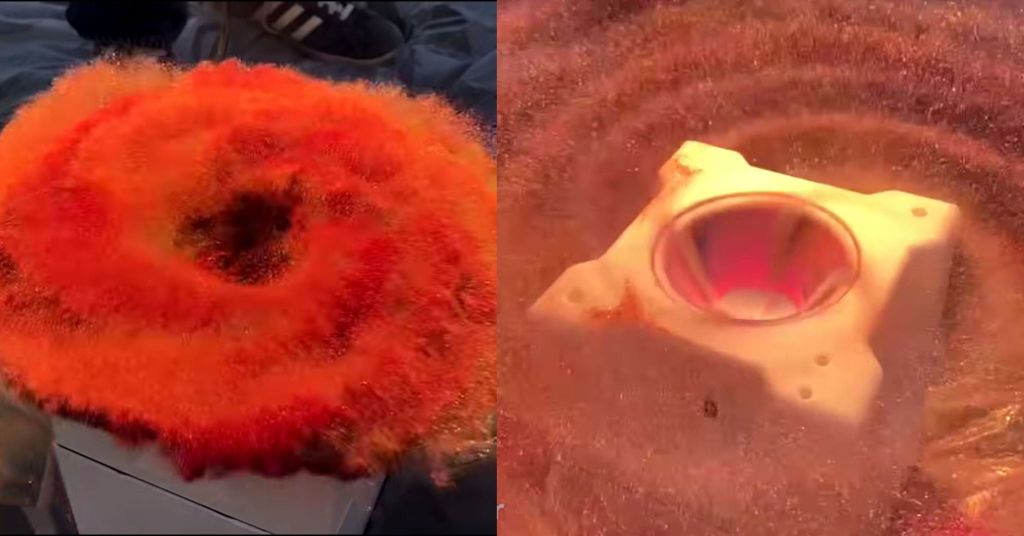 It’s an infuriatingly common aspect of modern life. You order something nice online. Maybe a new tether for your tetherball set out back. You’re all excited for some sweet teth’ action. But when the package gets delivered on your doorstep, some scofflaw swipes it for themselves. Package theft is happening even more frequently during the holidays, and worst of all there’s usually not nothing you can do about it.

But one man decided enough was enough, and took justice into his own hands. And the best part is, nobody got hurt–just really, really embarrassed. And glittery.

Mark Rober is an engineer and inventor who spent nine years working at NASA’s Jet Propulsion Laboratory. There, he helped build the Mars Rover, which is exploring the surface of the red planet right this second. Today, he runs a popular Youtube channel where he shares his inventions. One of them was a mechanical target that moves every time you throw a dart, guaranteeing you a bullseye every time. He’s a really smart guy.

Recently, Mark was a victim of front-porch package theft. For revenge, he decided to build a decoy package that would spray glitter (and fart smell) all over the next package robber.

Mark shared his project and the results in an 11-minute Youtube video, which you can watch below.

But if your Internet is slow, or you just prefer to read your stories, we’ve got a full recap as well.

The story begins sometime in the summer of 2018. One day a package arrived on Mark’s porch, but before he could collect it, it was stolen. Mark’s security cameras recorded the culprits, a couple strolling the neighborhood wearing backpacks. Most likely the bandits hit multiple houses that day. 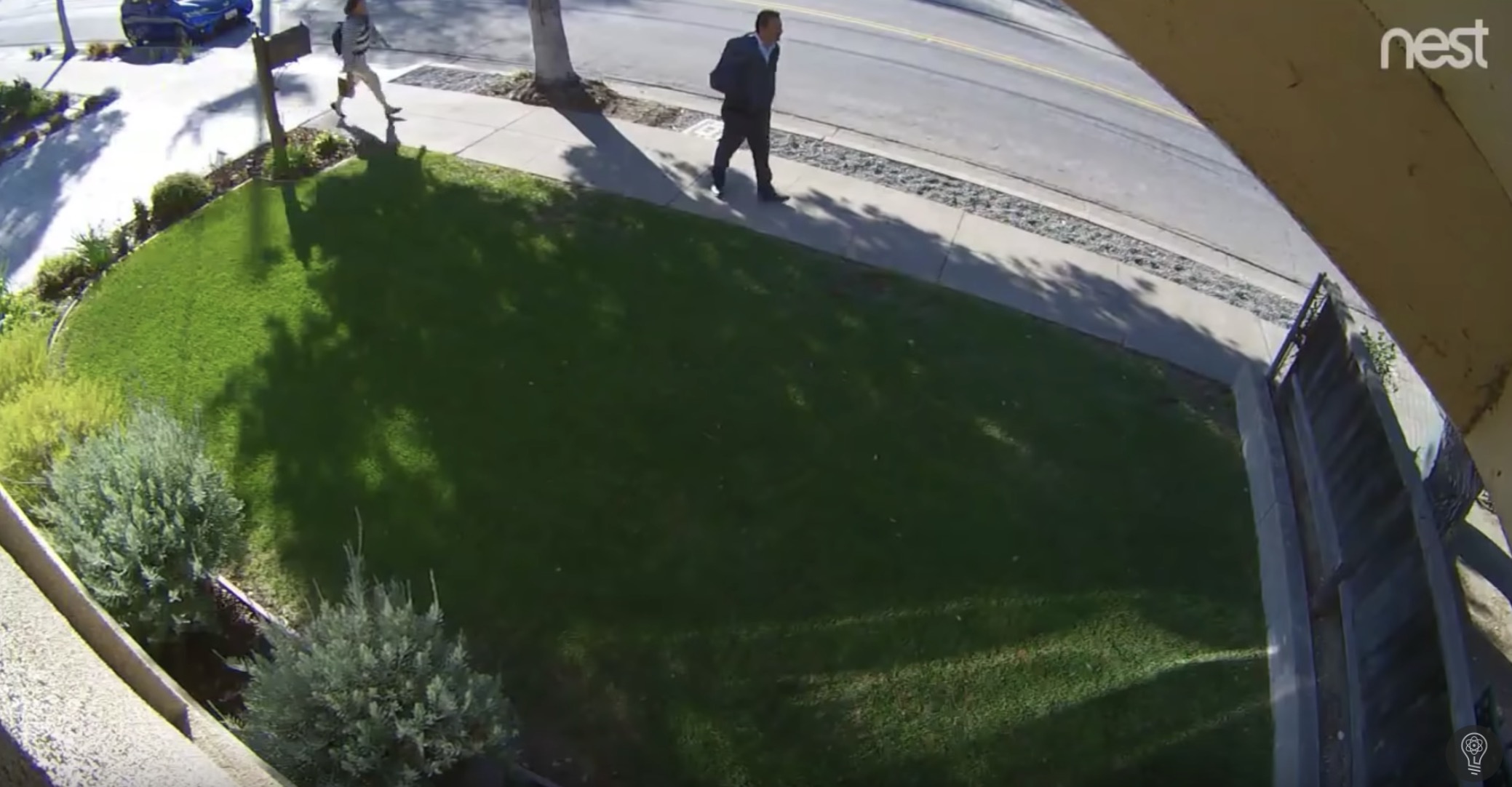 Mark took the video to police, who were uninterested in his case. Mark felt upset and powerless, but then he remembered: he’s an engineer! He can thwart package thieves…with science!

Mark decided to build a decoy package that, when opened, would spray glitter all over the culprit. Once opened, a rotating fan would shoot the glitter in all directions. This is the concept drawing for the glitter bomb. 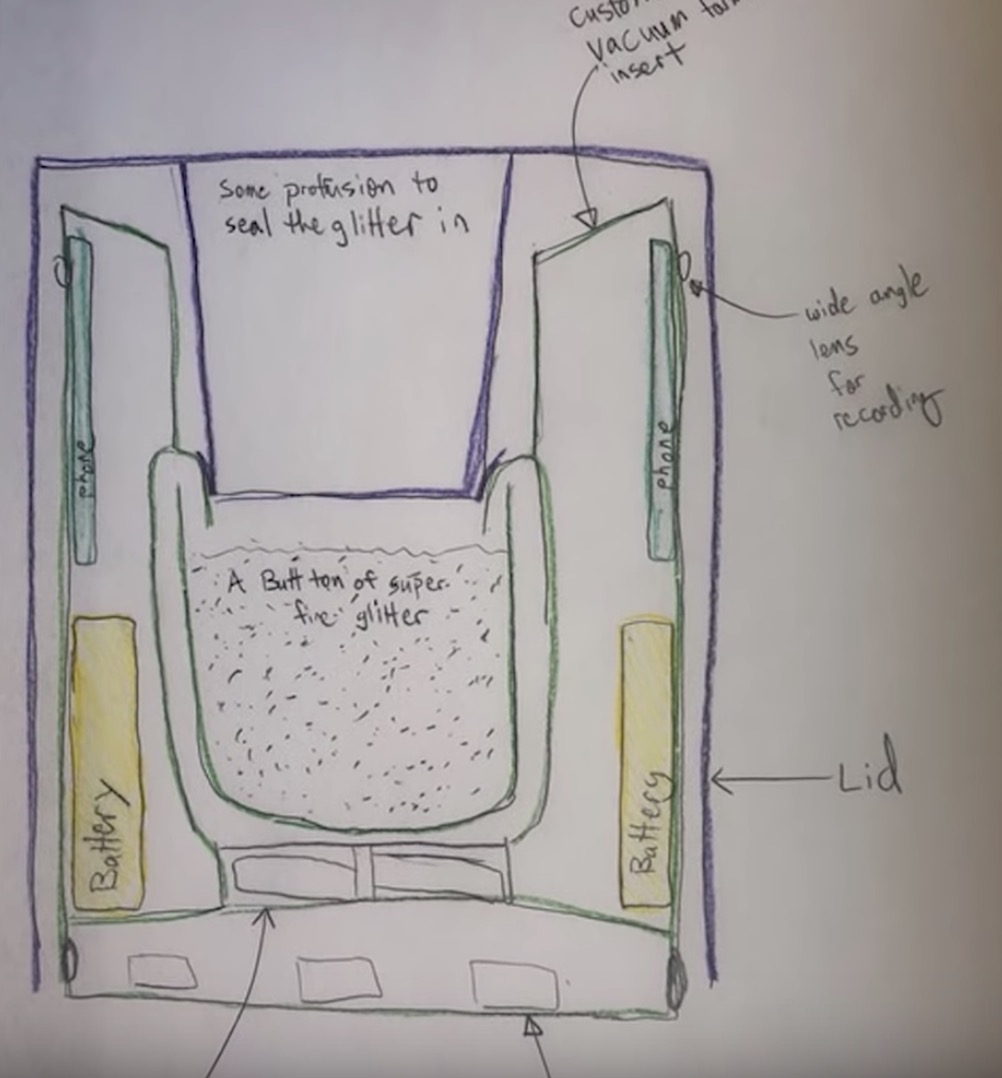 Mark also wanted to be able to record the glitter explosion and the culprit’s reaction on video, which presented several design challenges. The package would be sitting on his porch, possibly for several hours, so the recording would need its own power source, as well as a way to send the video back to Mark.

In the end, Mark decided to use smart phones to do the job. The phones’ data plan automatically uploads everything to a cloud, so even if the package is never recovered, they’ll still have the videos. 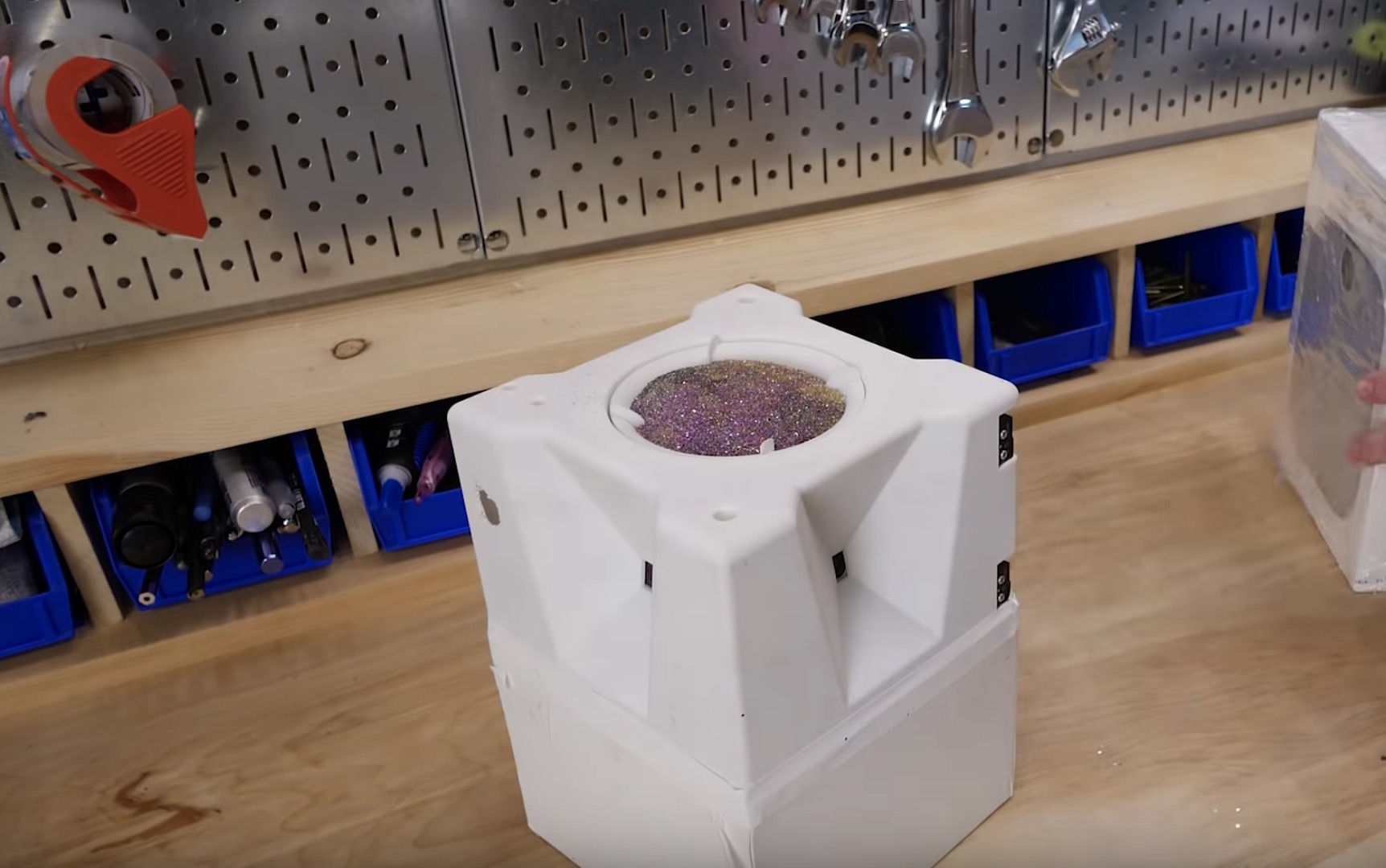 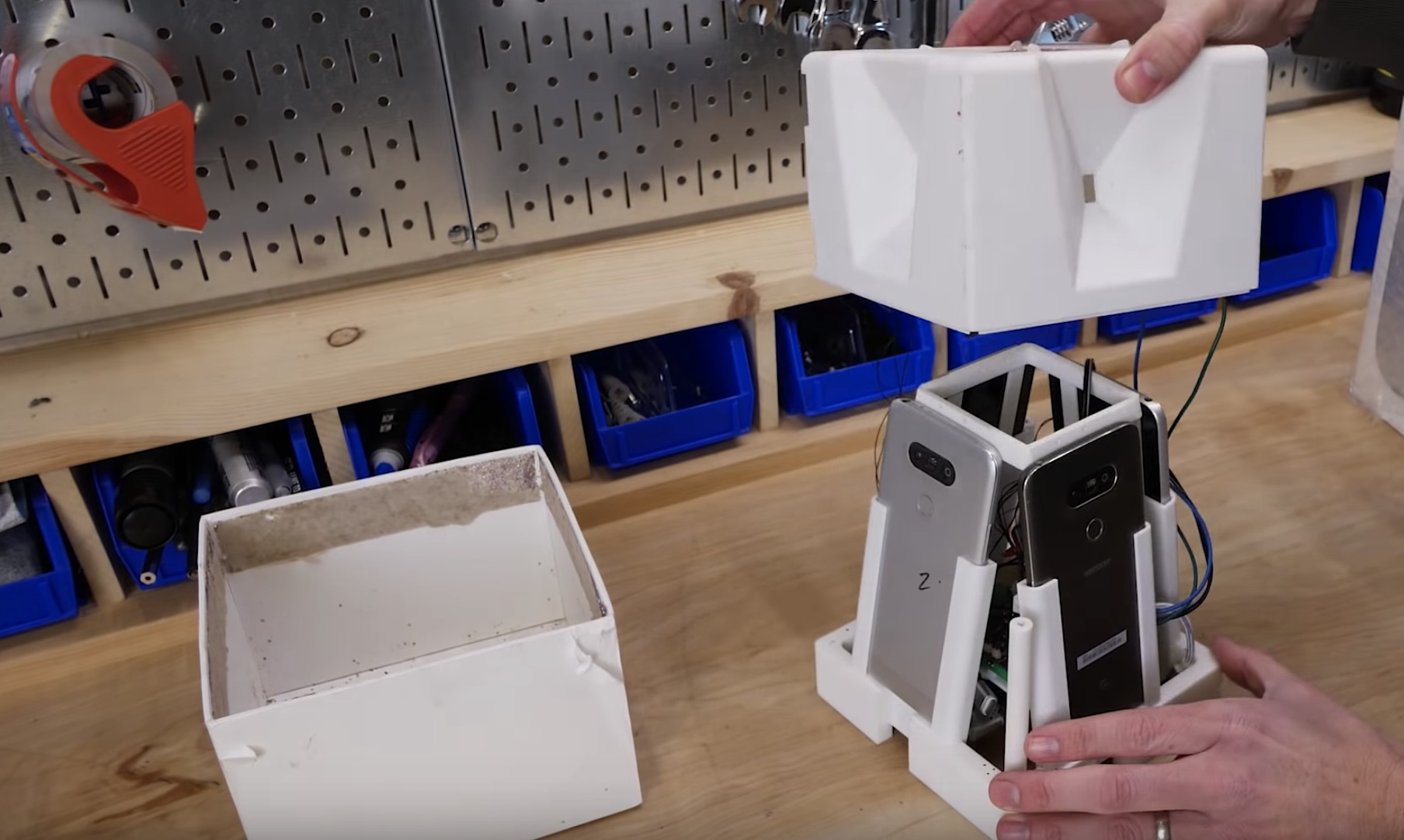 Mark used four cameras to get close to 360 degrees of coverage, and ensure that the glittersplosion would be captured on film.

To add insult to insult, Mark put a can of “fart spray” inside the package. He says that one spray is enough to clear a room, so he rigged it to spray five times every thirty seconds. 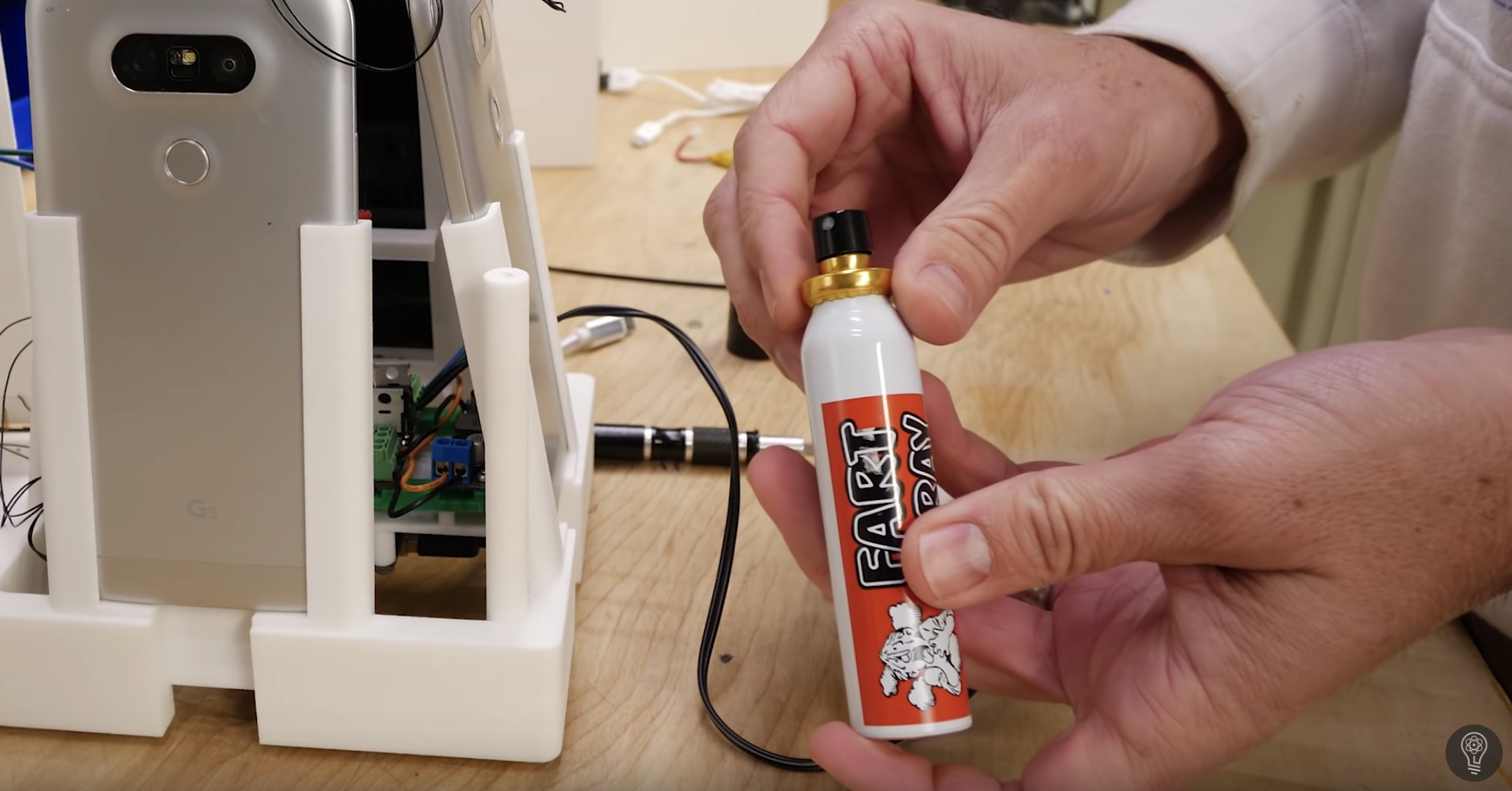 To make it look like a realistic package, Mark then put it in a box, shrink-wrapped it, and created a mailing label. As a cherry on top of this sundae, Mark used the name of his hero and inspiration for the return address: Kevin McAllister, aka Macaulay Culkin’s character in Home Alone and Home Alone 2. 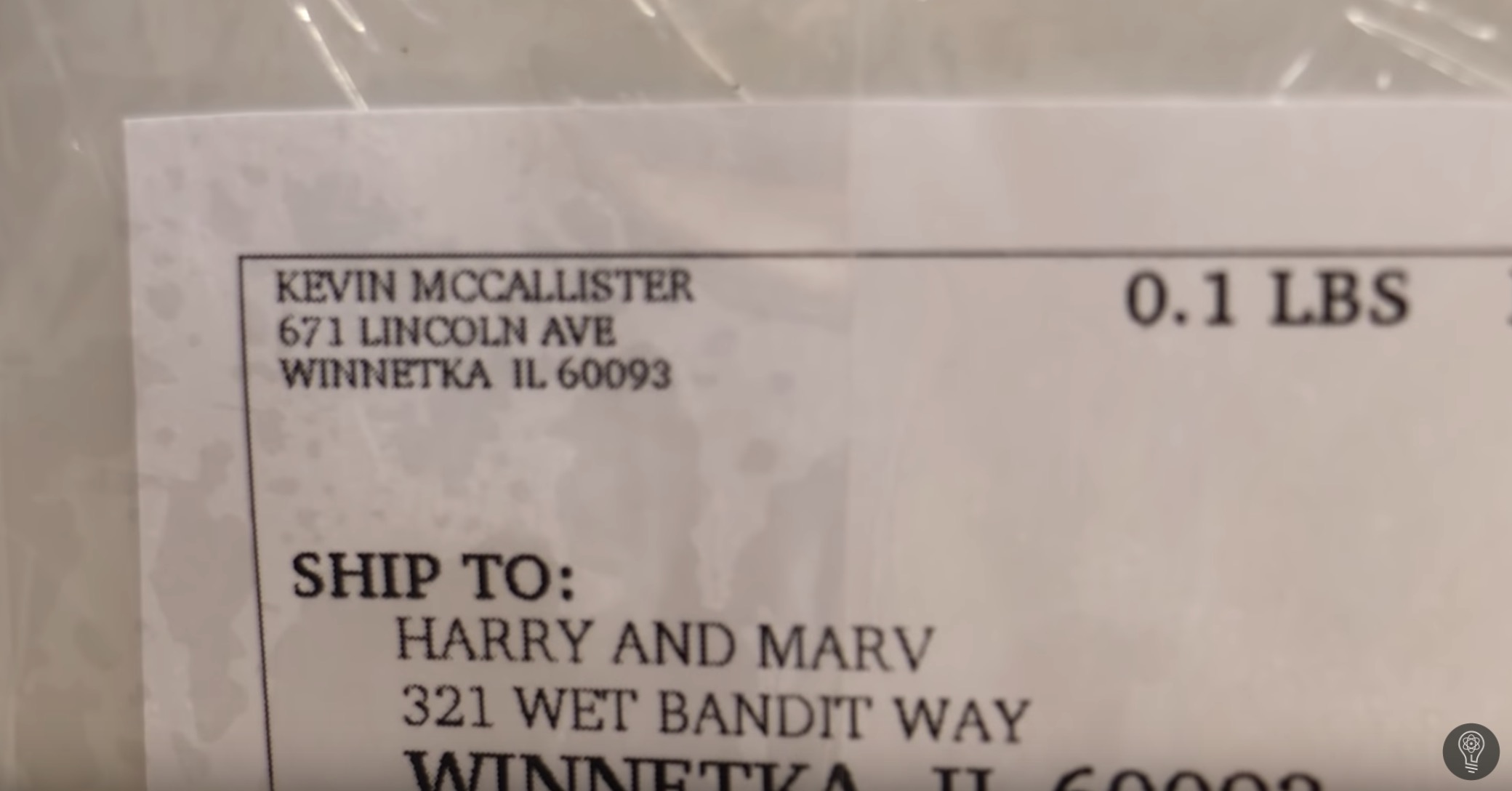 After plenty of testing, the device was ready for action. 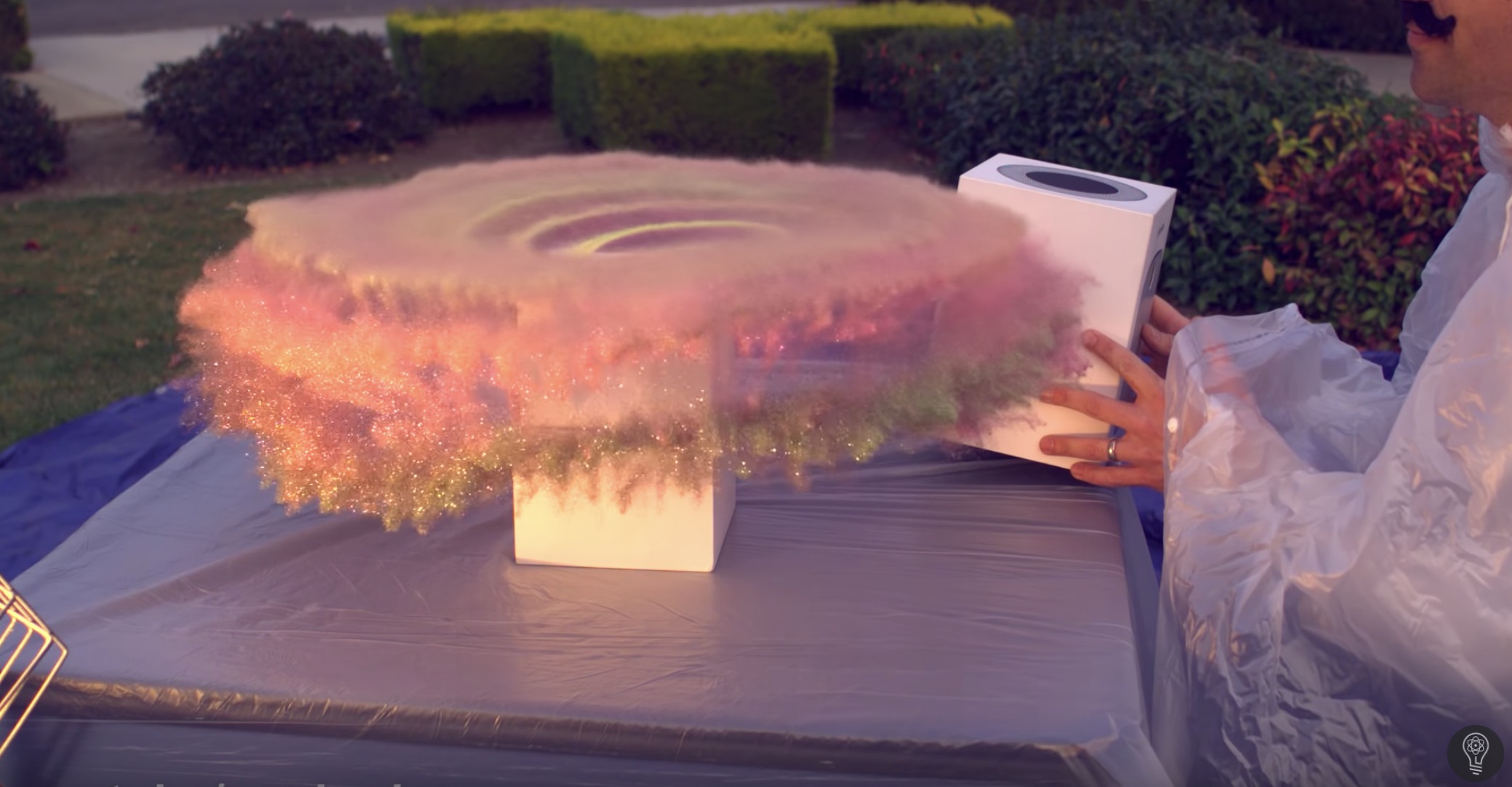 All told it took six months of work to build the device. It was time to put the device into action. Mark placed it on his porch and went to work, and sure enough, a couple hours later he got an alert telling him the package had been removed from his porch. The GPS locator tracked the package to a nearby parking garage. Mark headed straight there. 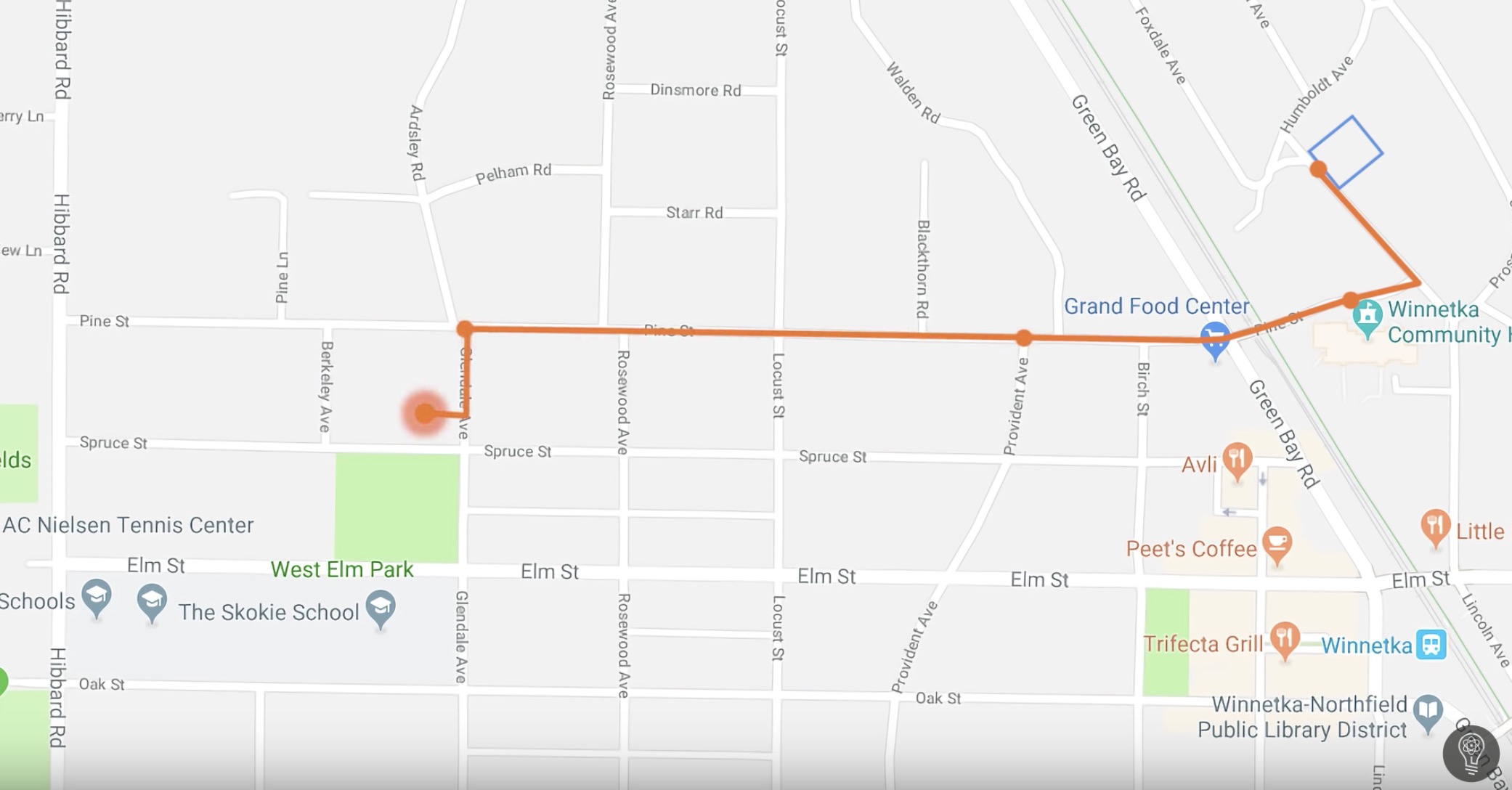 Mark arrived at the parking garage unsure what he would find. An angry, glitter-covered thief wanting blood? Nope. Just the glittery, farty remains of his work, discarded in a hurry. 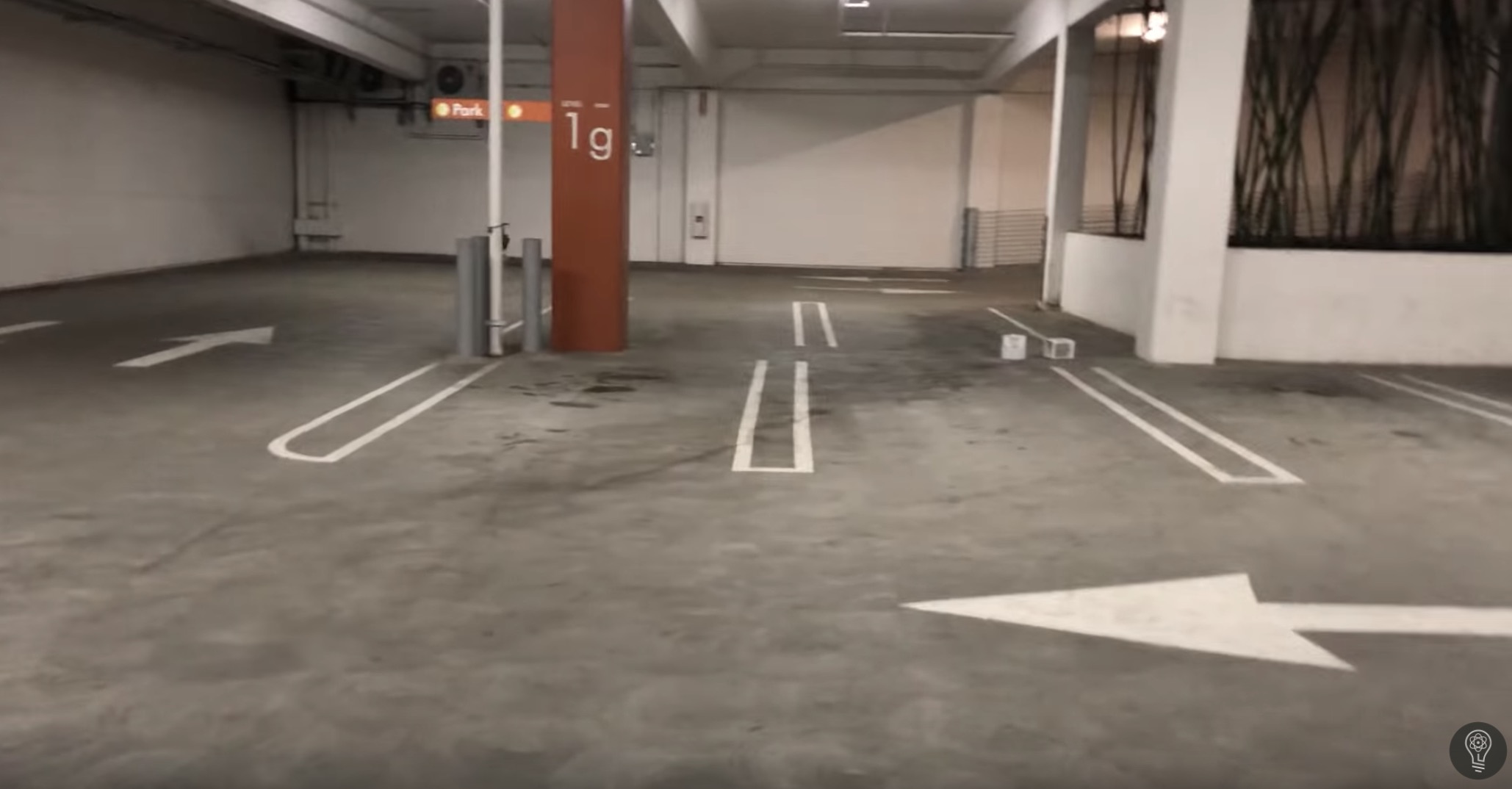 Luckily, the phones did their job and Mark recovered the video. In the video, a man walks by Mark’s house and steals his package, then gets in his car and flees the scene. At the parking garage, the man opens the package and the glitter bomb goes off. The man surveys the scene in disbelief, as his entire car interior is covered in sparkling glitter. As for the fart, it either didn’t work or the guy didn’t notice. 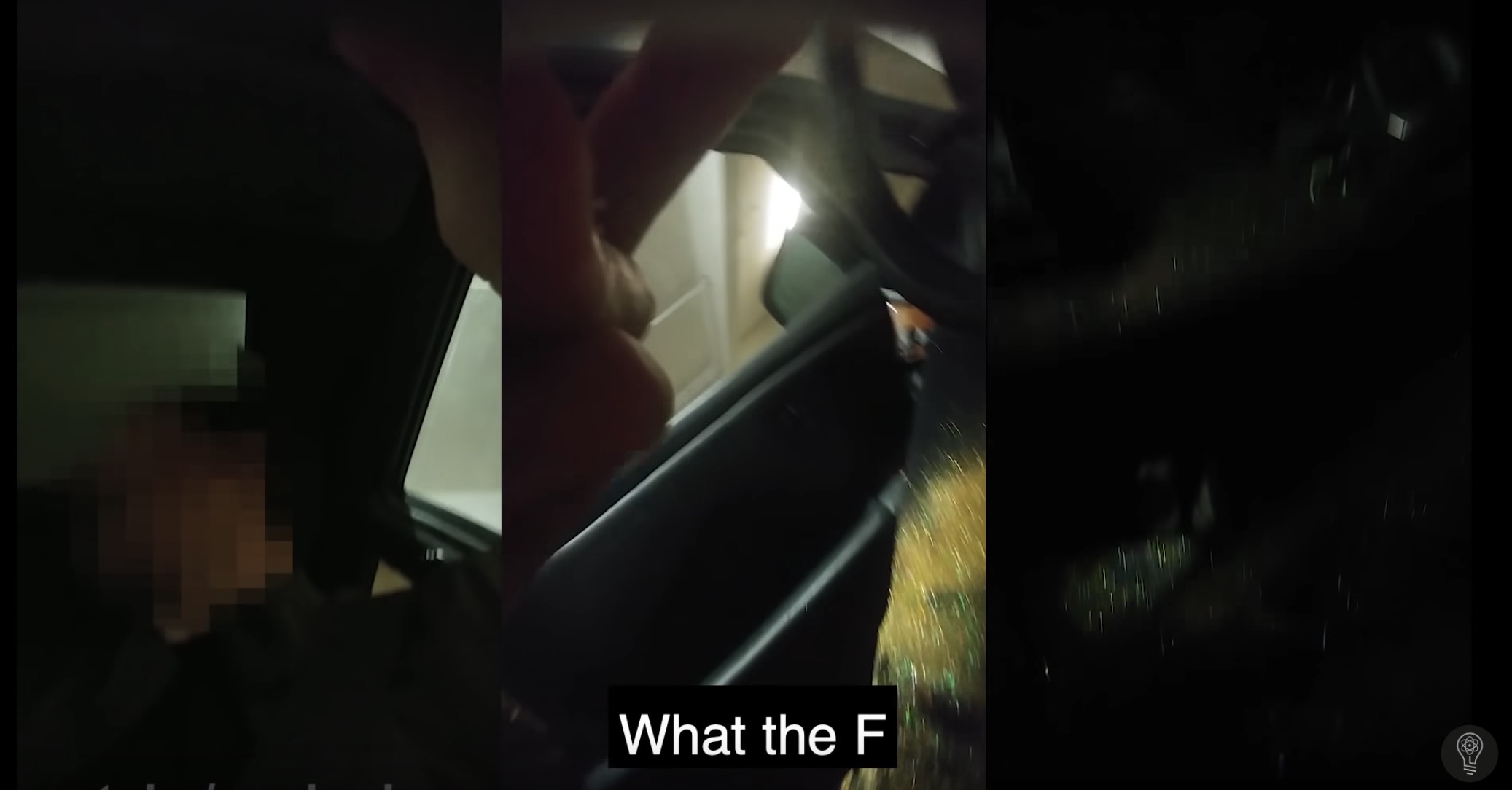 Luckily for us, Mark made sure to try his creation out several times. He lent it to a friend who also had packages stolen. The time, a passing black Sedan stops outside his friend’s house and slowly backs up. Another man gets out, saunters casually up to the porch, and takes the package back to his car.

He opened the package and the glitter flew. This time, the lighting was better and the cameras captured the glitter in all its glory.

But it was the blast of fart spray that forced him to throw the package out the window. 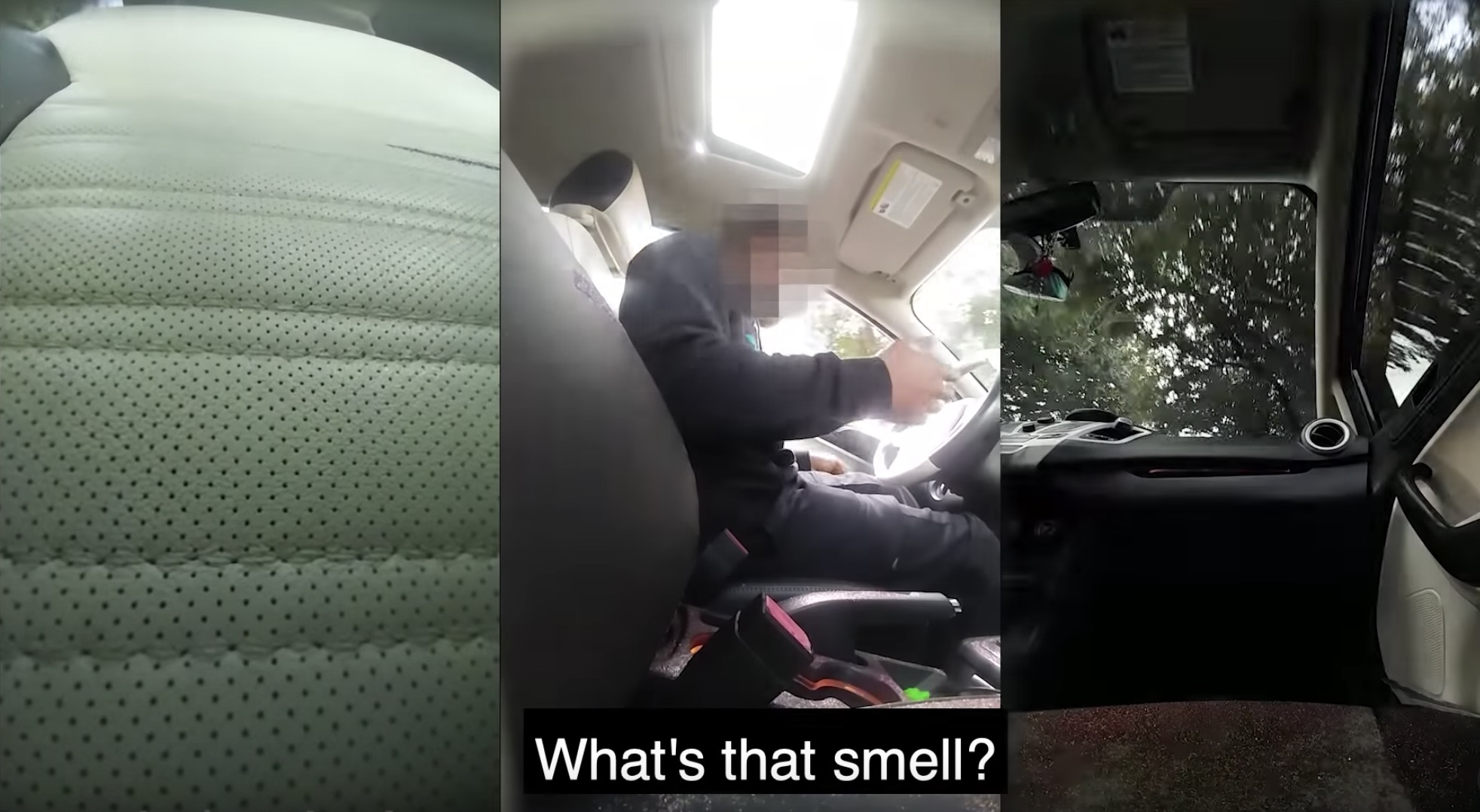 Mark and his friend would fool several more package thieves. One woman opened the package in her house, where it made a huge mess and stunk the place up. She angrily threw it in the trash.

Another time, a car of four friends swiped the package but the lid didn’t open fully, obscuring the video. After the glitter flew, the thief’s three friends laughed at him. One of them even pointed out that he got what he deserved. 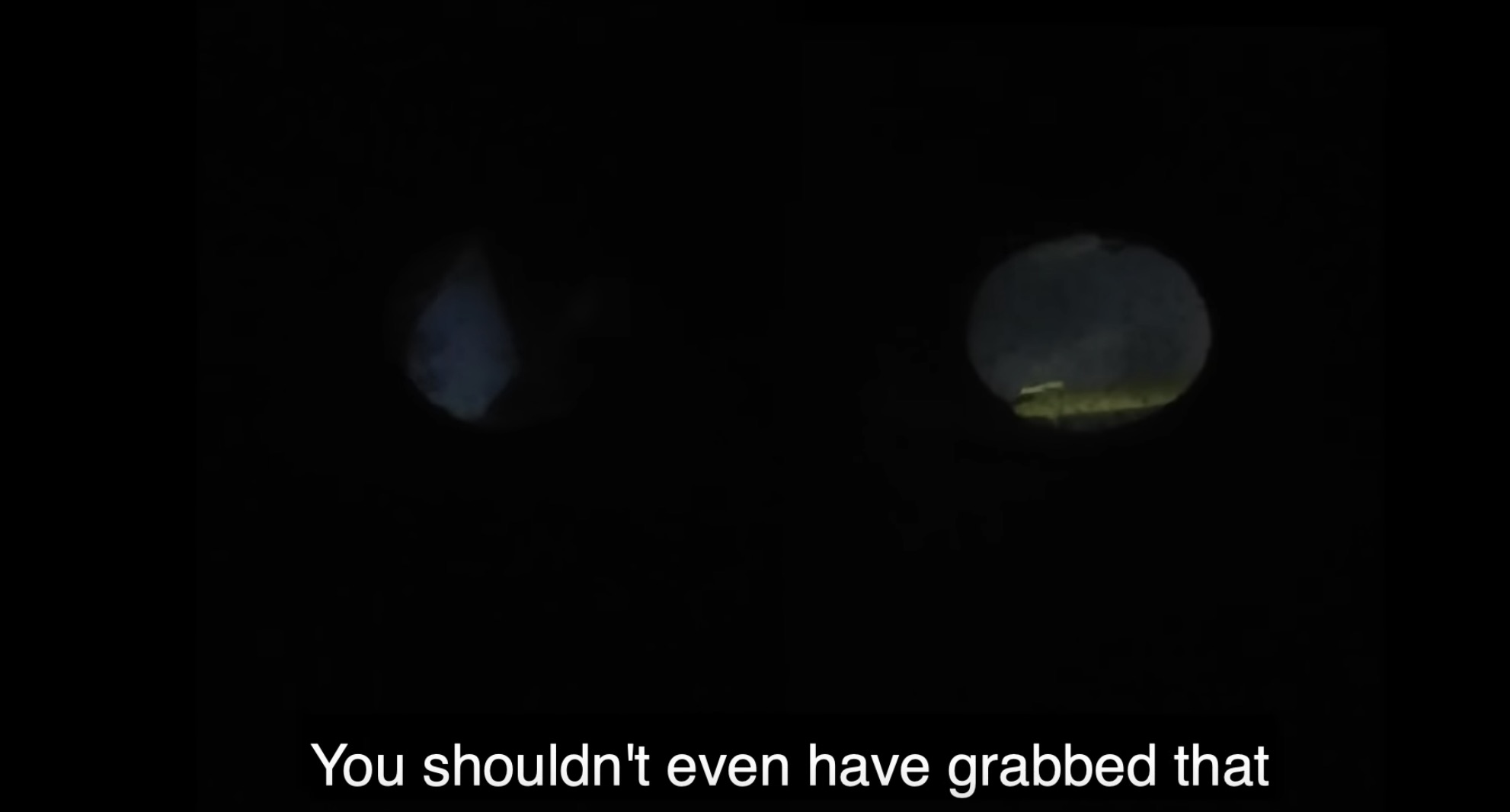 The final person to steal Mark’s device was a doofus in boater shoes. After being doused in glitter, the man stares at the package for a long moment in disbelief. The camera captures him inspecting the mechanism, and then vacuuming up the mess. 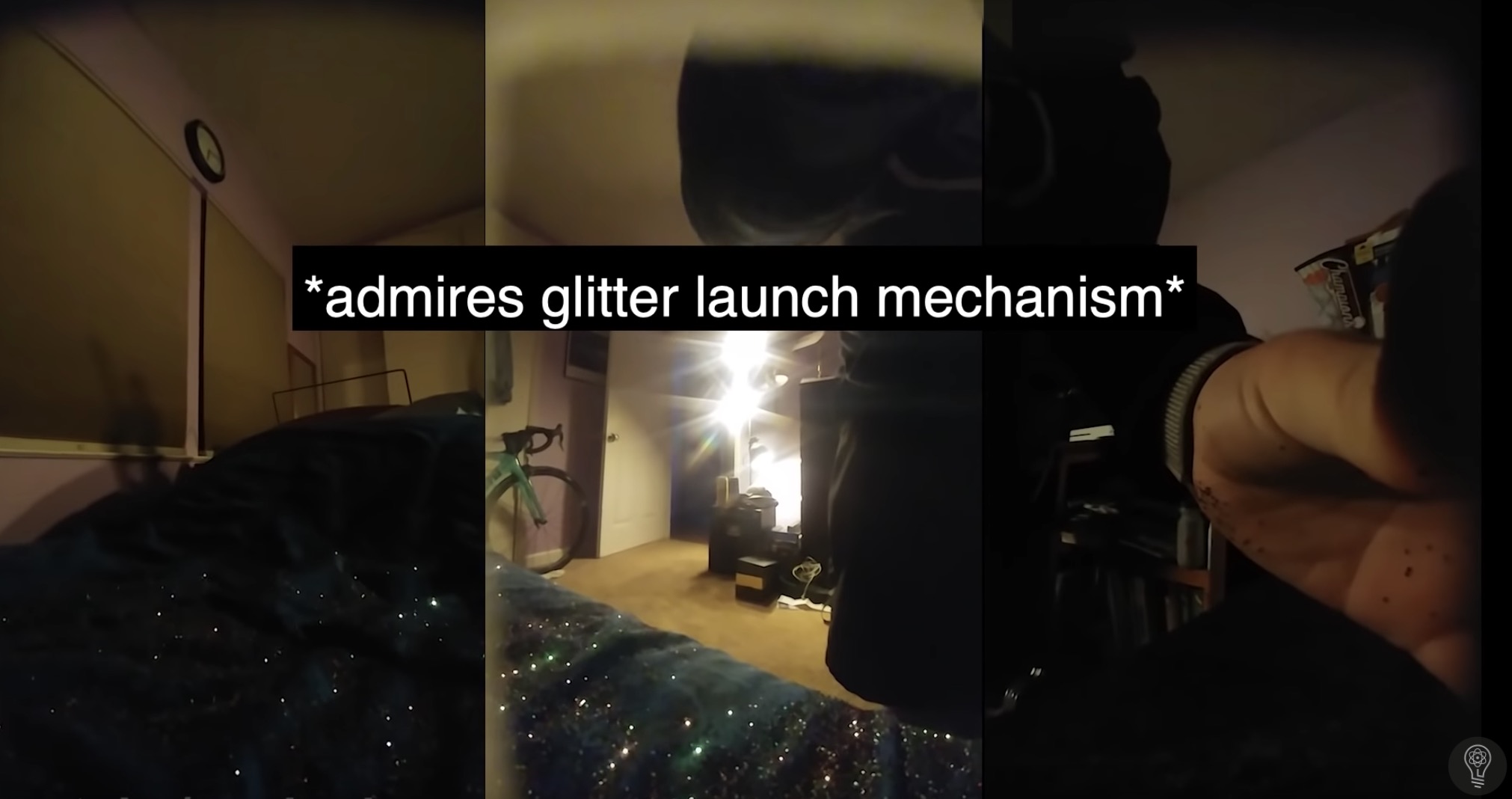 Besides the last guy, it’s never clear if any of the thieves realize that they were baited into humiliating themselves. Right now they probably think Amazon actually sells a glitter-spewing fart machine, and they’re wondering what kind of lunatic would order it.

But if there’s a moral to the story, it’s this: don’t steal packages. At the very least, you definitely won’t end up covered in glitter and farts.

And if there’s another moral to the story, here it is: don’t mess with engineers. They’re equal parts smart and crazy, and their revenge will be devastating.