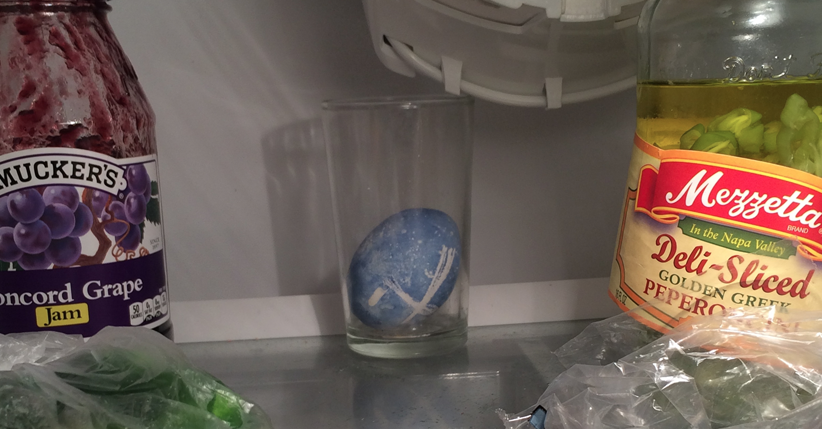 A Grandma, a Grandson, and a 25-Year-Old Easter Egg

This may be the most disgusting testament to a grandmother’s love I’ve come across.

Recently, Imgur user Anndddyyyy found a memento from his childhood that’s so old it verges on being an archaeological artifact. When he was eight, he painted an Easter Egg for his grandmother, and then presumably forgot all about it. But then, twenty-five years later, while helping Grandma move, Anndddyyyy went to clean out the refrigerator and rediscovered the egg:

Andy reached in and took out the egg to see how it’s holding up all these years later. The result? Not great, but not all that bad, either!

The paint is still mostly intact. The people at Paas must be proud.

As Anndddyyyy described in his Imgur post, Grandma is “Too old to be living on her own anymore so she’s moving in with my father. The egg is not welcome in his refrigerator.” Before throwing away the egg, Anndddyyyy showed it to his dad, gave it a little shake, and the shell cracked open, revealing the egg’s terrifying innards:

Anndddyyyy cleared away the egg’s shell to get a better look, in case you were wondering what a fossilized 25-year-old egg yolk looks like:

Apparently the ancient yolk doesn’t stink up the whole room, but rather “Has a funky smell only if you put it directly under your nose.”

When faced with a relic unexpectedly preserved from his boyhood, Anndddyyyy was left with a question. Specifically, “Why the hell am I touching this thing?”