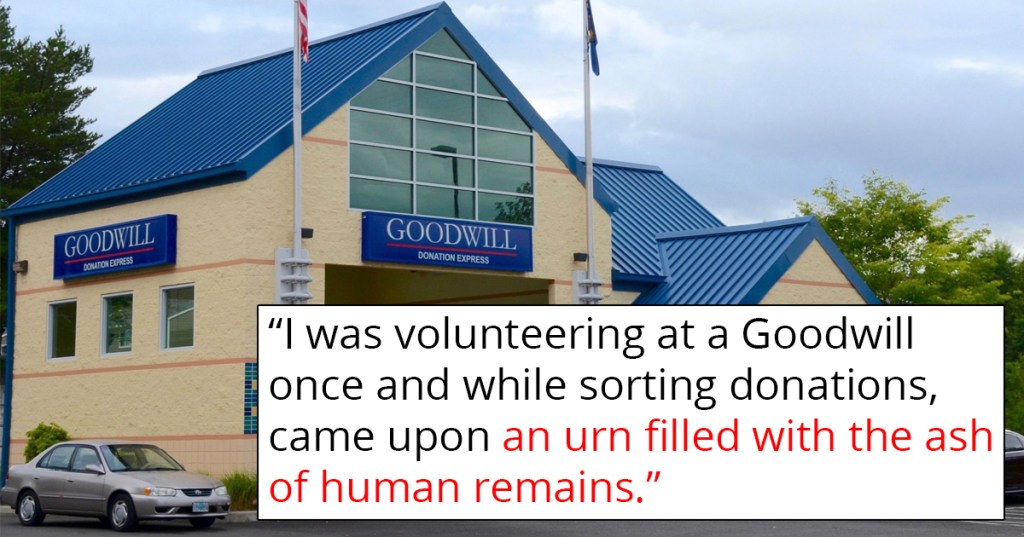 Goodwill Employees Share The Weirdest Things People Have Ever Donated

Goodwill does great work. They give all of us an easy way to get rid of our clothes and household goods without waste. They also give us an affordable shopping alternative to big chain stores. Heck, they even give people job opportunities when they would otherwise have trouble finding work. Everyone should love Goodwill!

Unfortunately, some people treat Goodwill more like a landfill. To them, Goodwill is a place to dump all your unwanted stuff, no matter whether anyone else could actually use it. Old pair of flip flops contaminated with your athlete’s foot? Throw them in the Goodwill bin! Used diaper? Goodwill bin! Worn down sex toys? Into the bin they go!

You might think I’m exaggerating with those examples, but I’m really not. Because last month, a Redditor posted a question to r/askReddit asking Goodwill employees and other thrift store workers to share the weirdest things people have ever donated. Over 5,000 comments later, we can say one thing for sure: some people are just weirdos, even when giving to charity.

1. I told you this happens.

“An S/M collection. There was a whip, a fur glove, several heavily illustrated insanely violent novels from the 70s, and other stuff I’ve forgotten. My manager let me take most of it for .99 an item. She kept the fur glove.”

“A book with ‘Bible for the Deaf’ written across the cover while the rest of it was written…in Braille.

They kinda missed the point with that one.”

“Worked there one summer at a satellite drop-off area by a bar.

Weirdest was a medical study skull made from a real human skull. It came in a legit medical study supply box. The top of the skull was cut and hinged.”

4. Dinner and a movie

6. Bruce Wayne needed to clear some stuff out of the Batcave

“A Blazer Vest with a LIVE BAT comfortably nestled inside it. Cute little guy.

Never got pictures, was before the age of smartphones I’m afraid. Got the thickest pair of gloves to carefully grab him and release him outside.”

“Haven’t worked at Goodwill (in Australia) but did volunteer in an op shop for 8 months. Most interesting thing by far was a piece of East German Propaganda from 1967 about the Berlin Wall. Included lots of info about how the West Berliners were smuggling weapons and criminals. Interesting read for sure.”

8. So THAT’S where I left those

“3-man tent. All poles, excellent condition, complete with poop-filled underwear stashed away in one of the pockets attached to said tent.”

“Hey, a question I can answer, I’ve gotten lots of stuff! The usual sex toys, lots of weed, I got a barrel of wine, used needles (one of which I found with my finger), once accidentally accepted a cat hiding in box of clothes. There were things like 14 ft Christmas tree, Nazi lantern, knit dick sock, a guy tried to give me his truck once, which apparently my store does take vehicles but those are picked up after paperwork is filled out not donated directly to the store. My lead got mad me for taking a bouncy castle once.”

“During the Austin, TX serial bombings earlier this year, someone donated an artillery simulation device that ended up going off while being sorted and led to minor injuries to an employee and mass hysteria that the bomber had started to target donation drop offs.

“We got a winter jacket with a lice comb and an extremely old hard boiled egg once. My coworker took the egg out back and chucked it, which is how we found out about it being hard boiled… Also people have accidentally donated their groceries before, that’s always interesting.”

“We got a HELLA expensive gold necklace, like, $1,500. Our price printer only went up to 999, so that small necklace in a bag had TWO price tags on it. My manager put up a sign on the front door saying it existed if someone wanted to buy it. I was in shock as to why someone would just DONATE an expensive jewelry necklace. It was insane.

Someone came in wanting to buy it and the manager had to sell it to him cause a lowly cashier might screw it up.

Except my manager screwed up and only scanned one of the price tags. She got fired by a higher up for missing out on $500.”

“I was volunteering at a Goodwill once and while sorting donations, came upon an urn that still contained the ash of human remains.”

15. And finally, a family heirloom