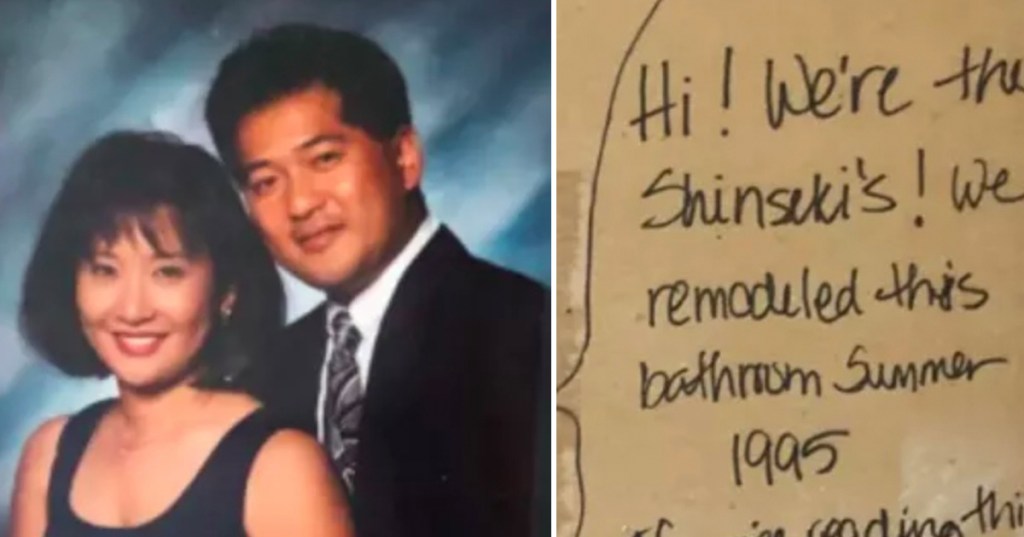 Remodeling is one of the stranger projects you can do around the home. It takes a lot of hard work to customize your home, but at the same time you’re also destroying someone else’s hard work–and you know in the back of your mind that some day, someone else will come along and destroy YOUR hard work.

The whole process is kind of absurd, but when one couple recently remodeled their bathroom, a message from the previous owners that made their home makeover a lot more fun.

Alex and Jess Monney were redoing the bathroom in their San Jose home when they got a text. Their contractor had just ripped down the walls, only to find a handwritten note and a photo from the last couple who owned the house, the Shinsekis. 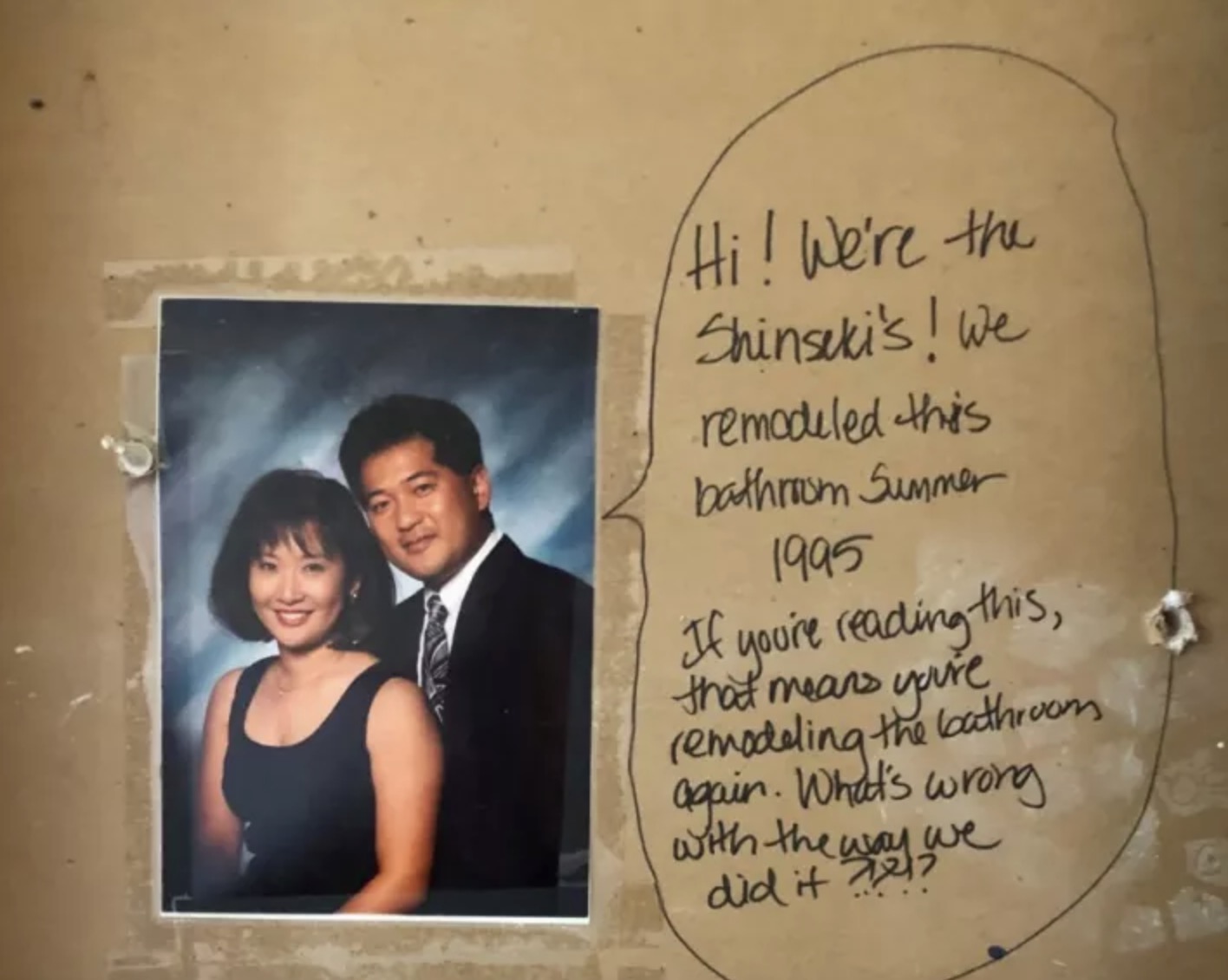 “If you’re reading this, that means you’re remodeling the bathroom again. What’s wrong with the way we did it?!?!” the note reads.

“We thought it was hilarious!” Alex told BuzzFeed. “Totally unexpected so it gave us a good laugh throughout the day.”

Even better, the Shinsekis included a note from the family bunny, Cassie. 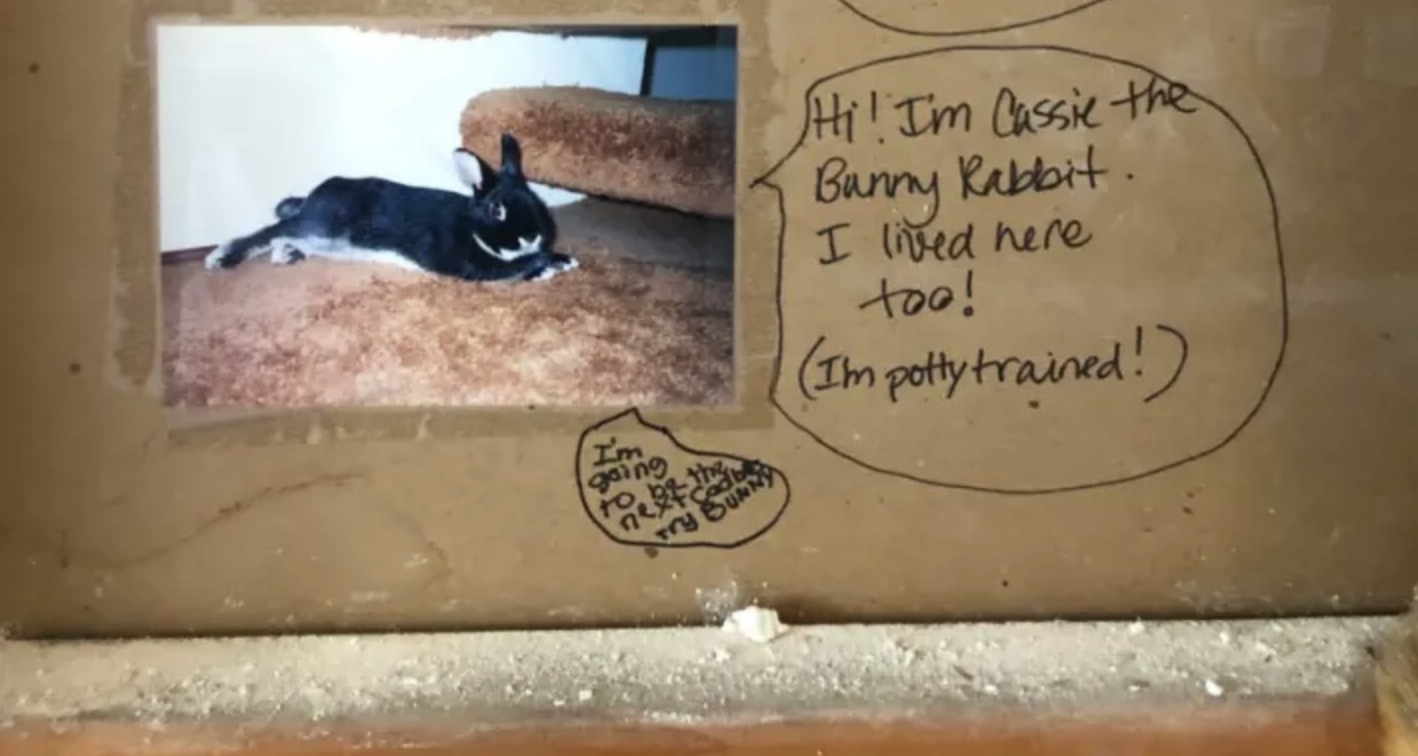 Sadly, Cassie never did become the Cadbury Bunny like she hoped. But hey, she was still potty trained, which is no small accomplishment.

Alex shared the message on Twitter, where it went massively viral, racking up over 80,000 likes in just 24 hours. People have been charmed by the Shinseki’s cheerful note, and they’ve even tried to track them down, without success.

If the Shinsekis do ever find out that their long-lost message has been found, Alex and Jess have something to say to them:

“Your bathroom, and home, is lovely. It has given us a lot of beautiful memories and we can’t wait to raise our little baby girl here. Sorry we’re changing the bathroom, but the shower is too small for me to fit in (I’m 6′ and my wife is 5′). Thank you for the amazing surprise!”

The rest of Alex and Jess’s renovation was an uneventful success. 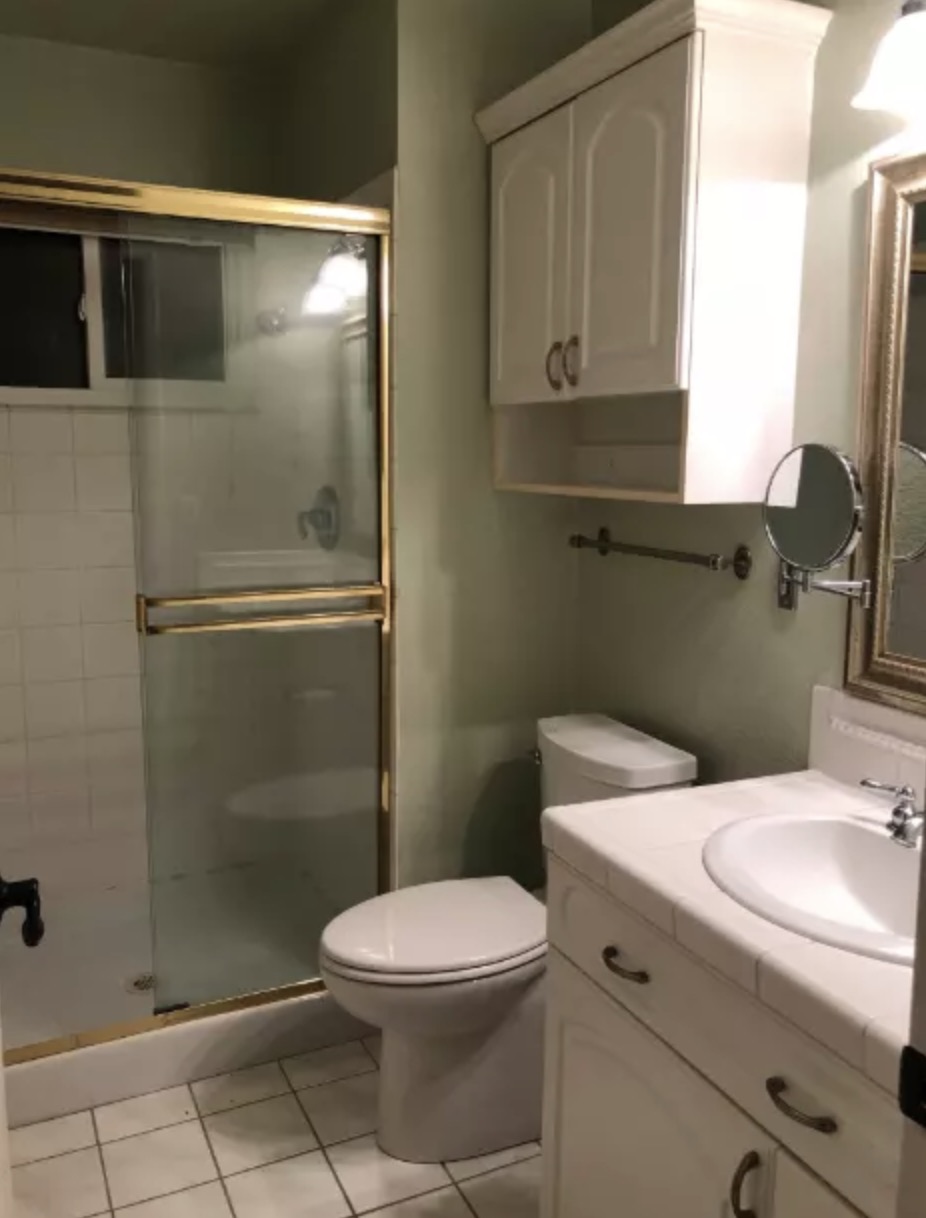 While redoing his bathroom, one man found a note from the last owners, who cheerfully let him know he was undoing two months of their hard work. 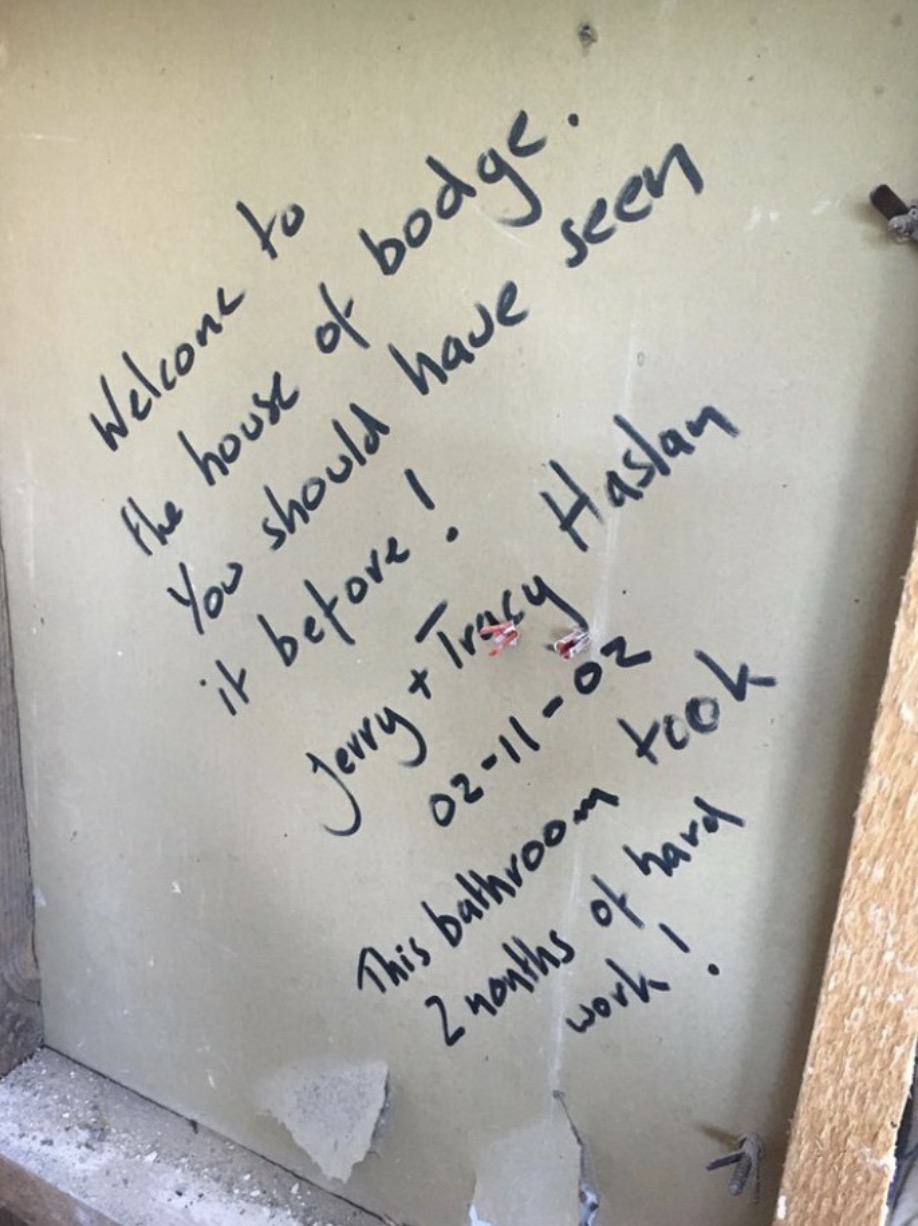 Another couple paid tribute to their wallpapering project. 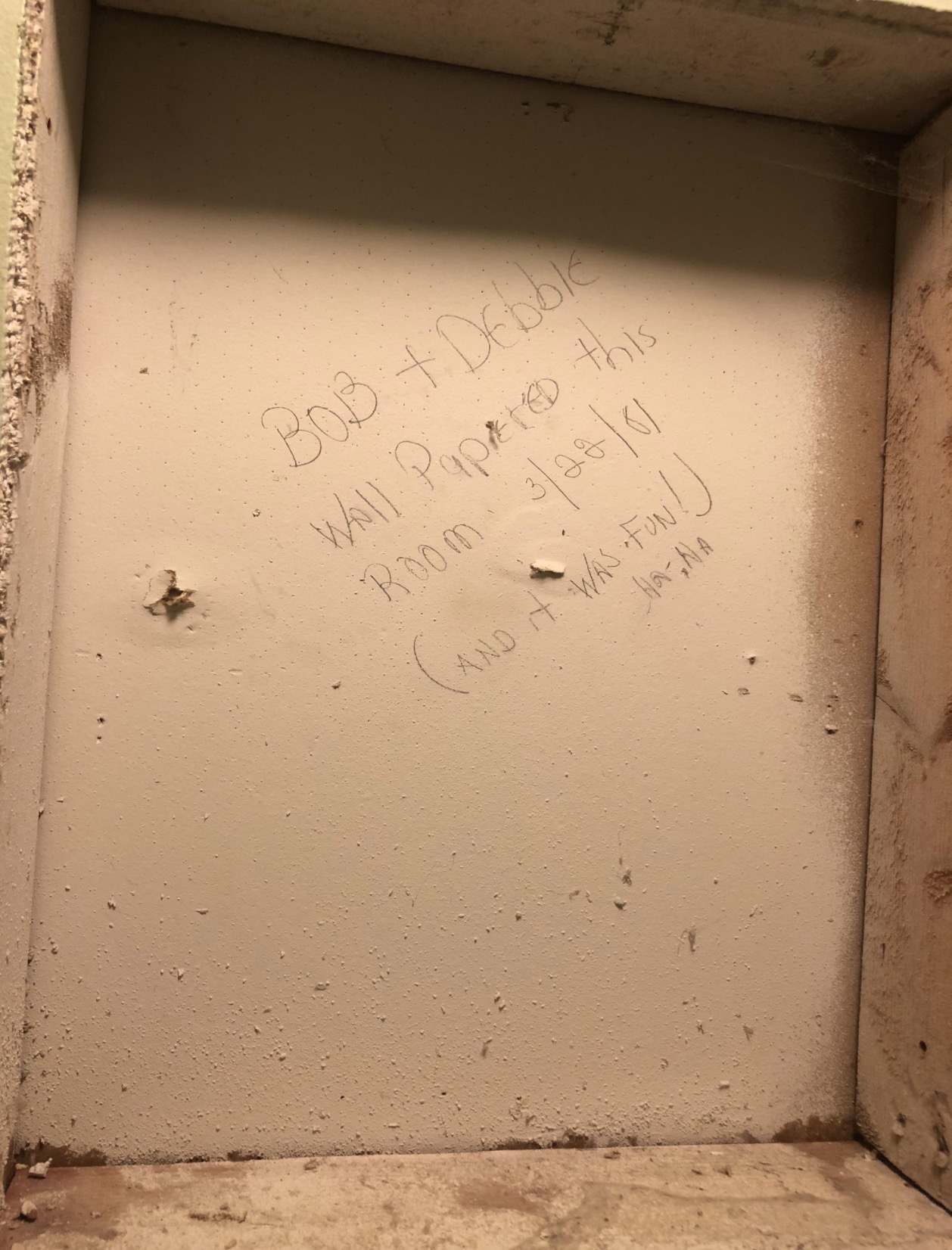 This guy found a note from his grandfather, who wasn’t quite as understanding. 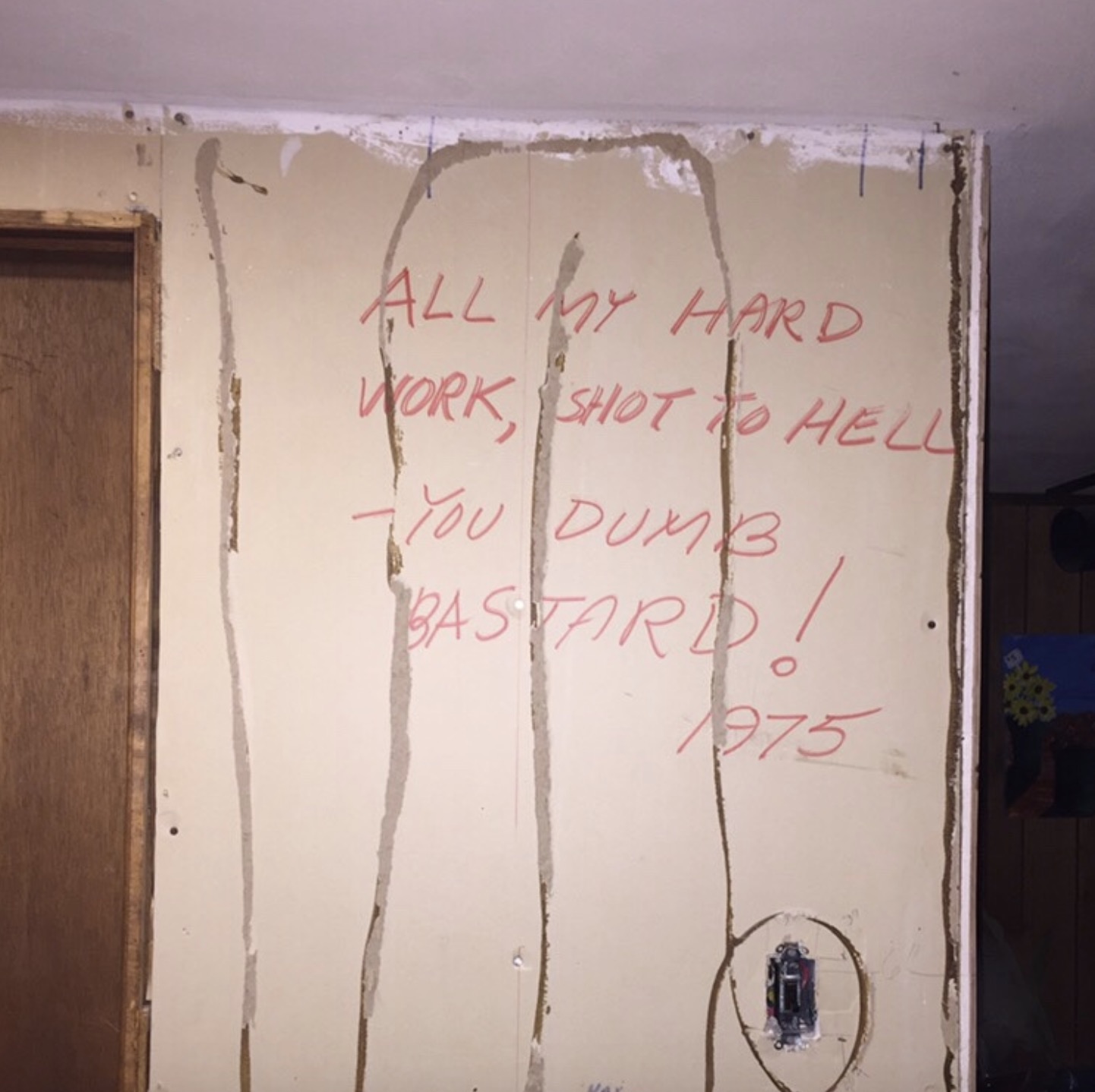 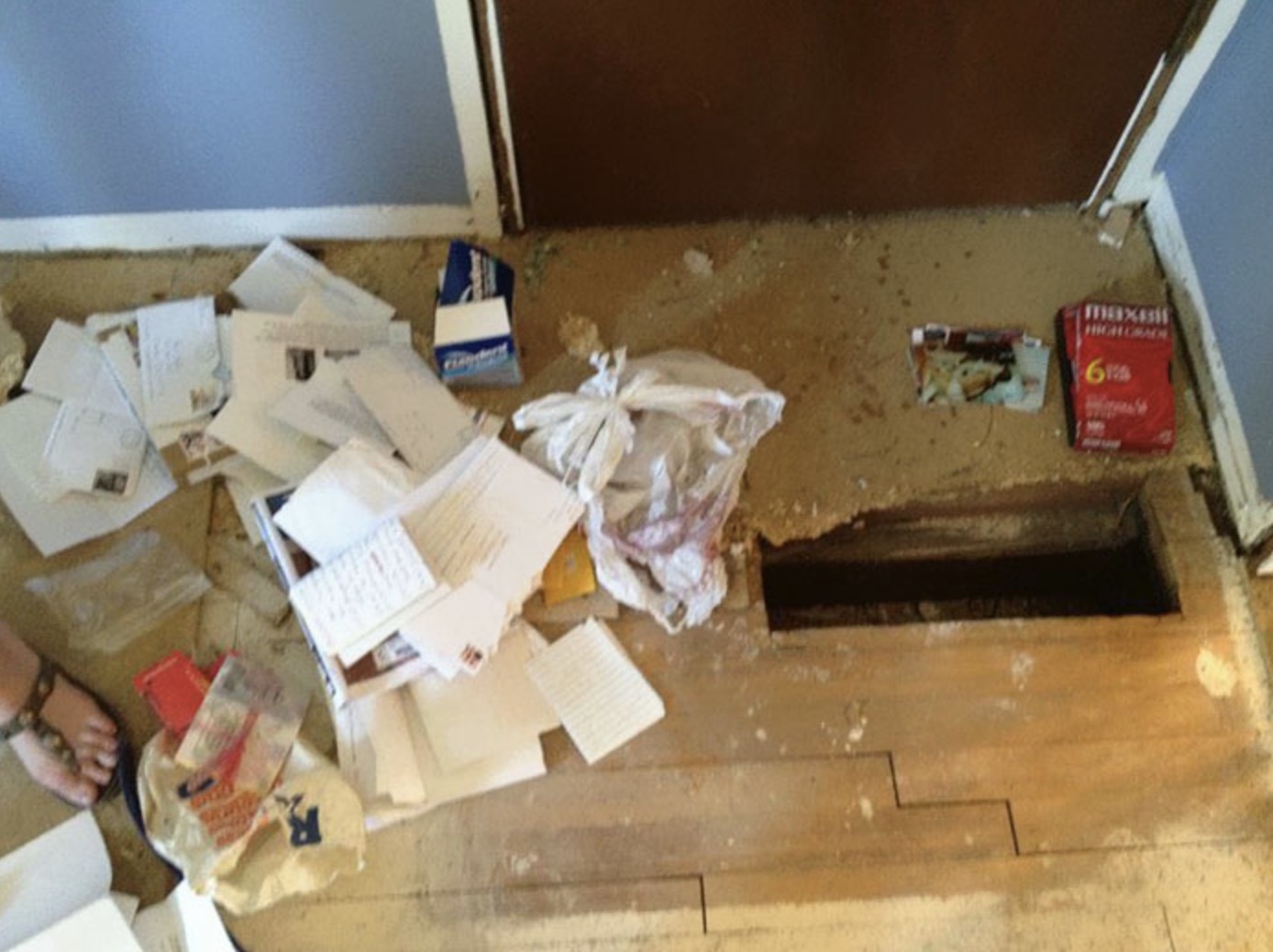 Messages are nice, but some folks use a remodeling project as an opportunity for a killer prank. Like this guy, who’s making sure the future owner of his home never sleeps again: 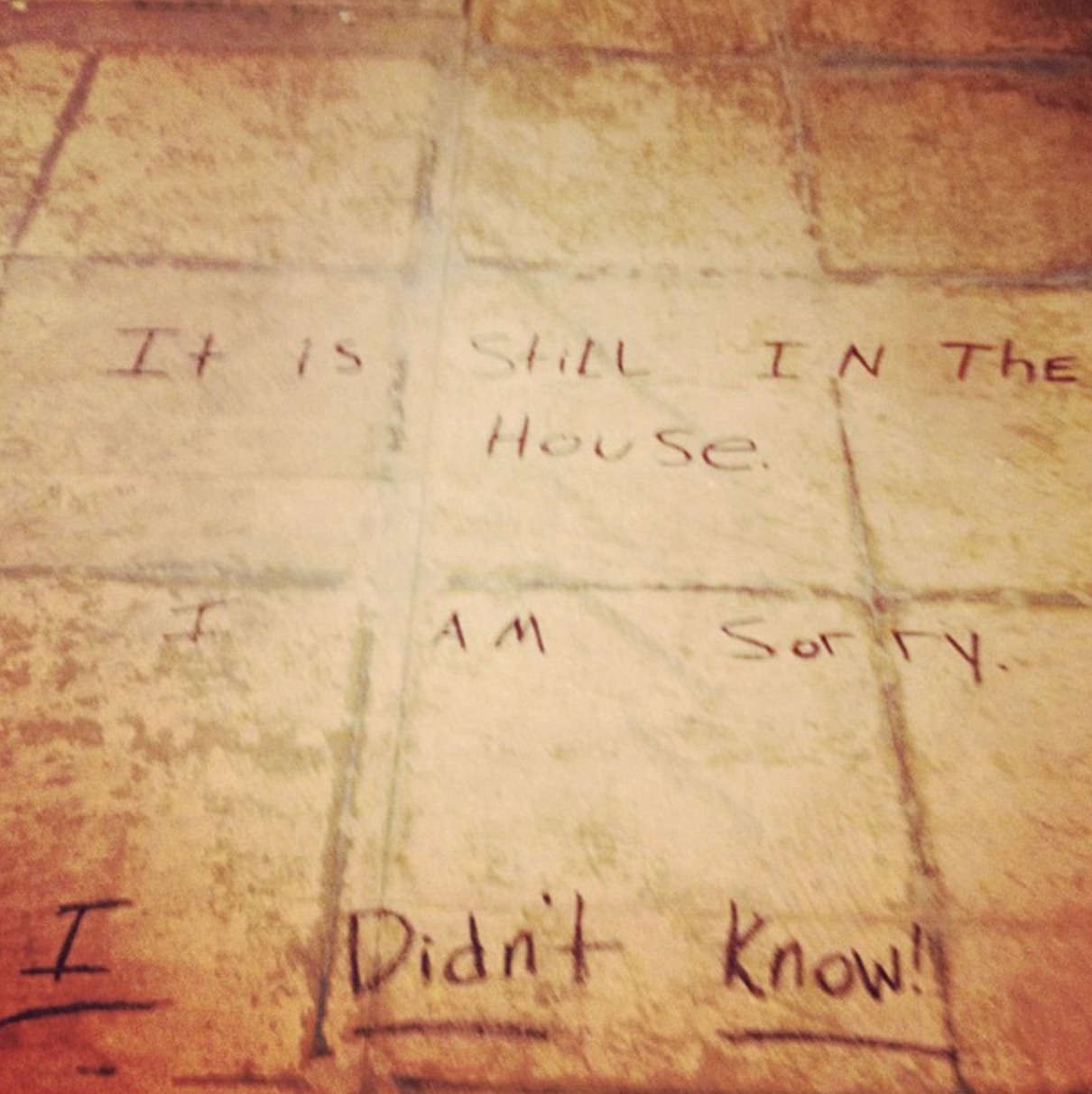 Or this woman, who left her future occupants a gift: a visit from the police. 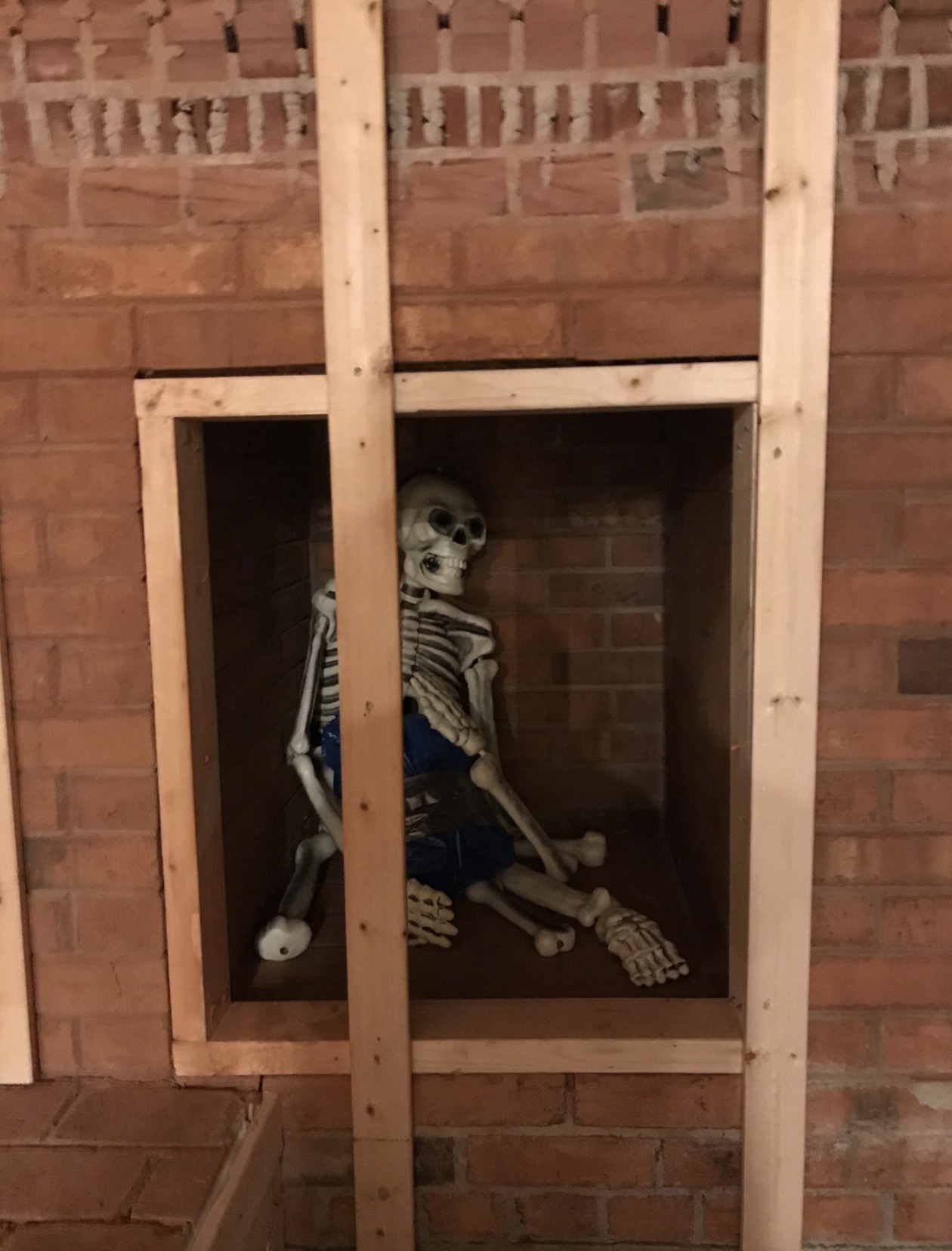 And then there’s Bob and Lori, a.k.a. the Romeo and Juliet of the 21st Century. 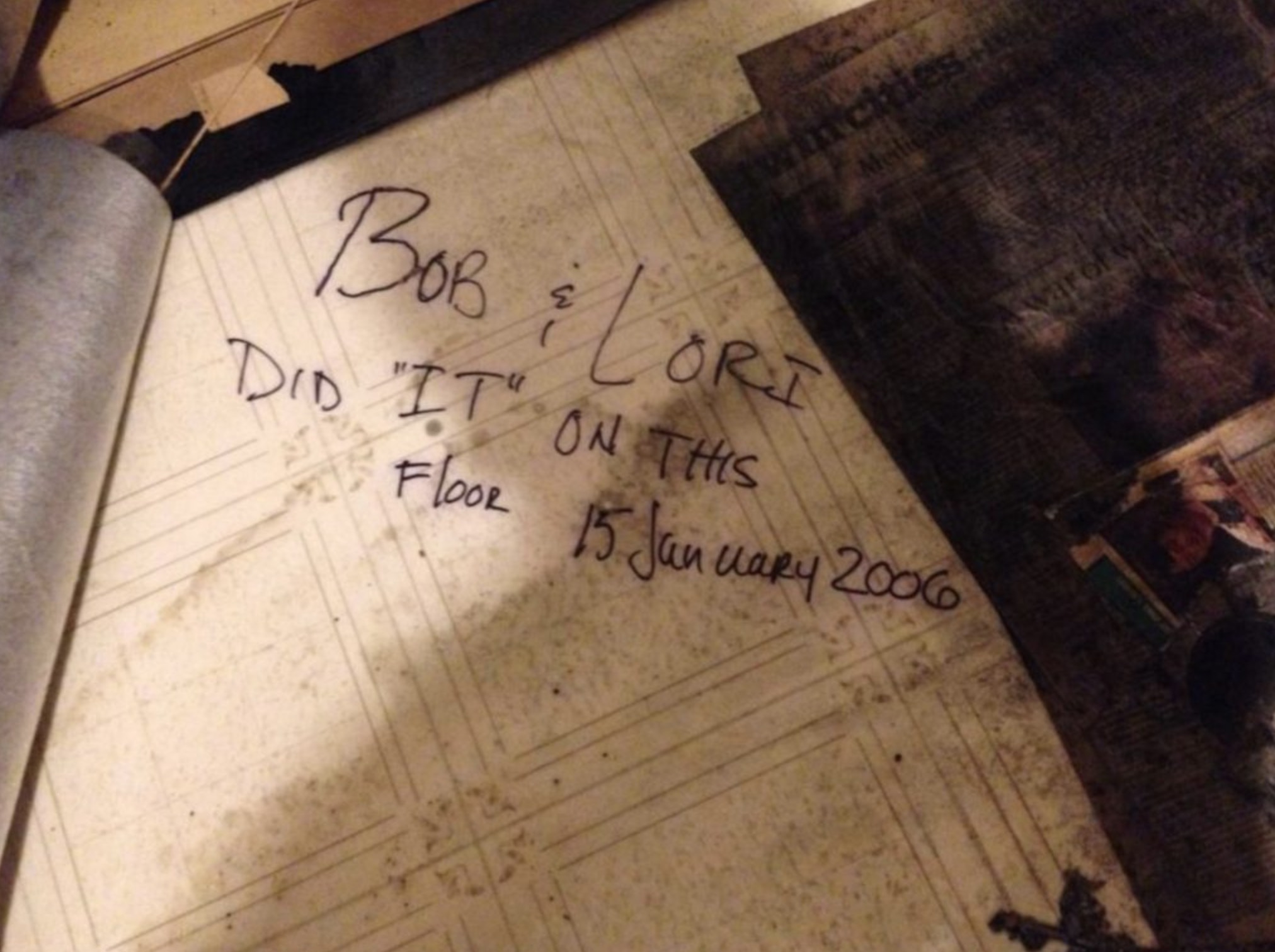 At this point, if you yank out your floorboards and DON’T find some sort of message from the past, you’d be right to feel cheated.