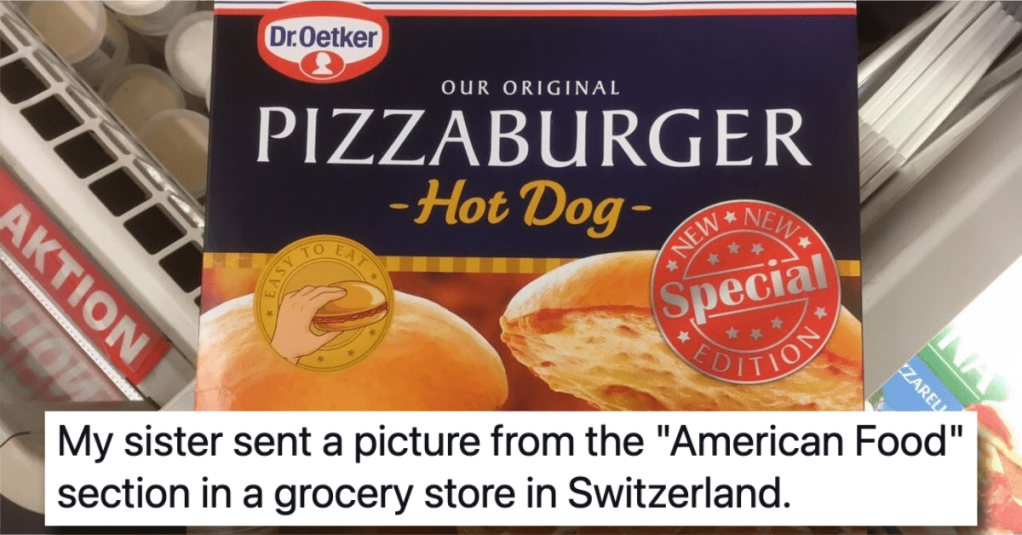 What the hell am I talking about? Well, let me tell you, ladies and gentlemen.

I’m talking about the fact that a lot of other countries out there have whole sections dedicated to American foods in their stores. This is kind of blowing my mind right now!

And, because we aren’t seen as the healthiest folks on the planet, a lot of these American sections are filled with JUNK…which I guess makes sense.

Hey, who are we to argue with these foreign folks? We love to eat stuff that isn’t good for us!

Check out these pics of American food sections overseas.

1. This needs to make its way over here.

I could see this catching on…

My sister sent a picture from the "American Food" section in a grocery store in Switzerland. pic.twitter.com/plownVPkBn

In 2019 someone in the UK posted the "American food" section of their grocery store and it was basically candy, Doritos and hot dogs in a jar. I am pleased to report on the BRITISH food section of my American grocery store (it's located next to the ASIAN foods). pic.twitter.com/FJFA02MFsB

Well, they’re not wrong about it.

Found these in the specialty section of the local marché. "A True American Tradition" pic.twitter.com/nZVRxFhuzp

Hey, don’t knock it until you try it.

Found these in the American section at the local tesco! Boom.. pic.twitter.com/N1GqkQpPQt

When you find yourself across the pond.

Shout-out to our #American customers… You will find most of the #treats you miss from the #US in our shops and online.https://t.co/PrNRj1T9CA pic.twitter.com/3ahqQW5vYj

Got middle of the night munchies and discovered my corner store has an American section holy shiiiit pic.twitter.com/UFYTCQu8GO

What American food would you miss? Lindsay Swisher @msfsinfo'19 was entertained at this USA section of the international aisle in a grocery store in Yangon, Myanmar, where she is interning @PlanGlobal. #SummerSFS pic.twitter.com/FYUMkD2H28

8. That’s quite a selection.

What I bought today in the „american“ section in our supermarket #fascinathings pic.twitter.com/rHbHaofDnd

I’m a glutton for punishment.

I always love showing my friends in the US all the “American food” in Germany so here you go. I gotta say, that snack box looks pretty legit. That’s a White Castle order. pic.twitter.com/M00Ldj5EvP

Trust me on this one…

I found an American food section.

So many marshmallows and kinds of fake cheese. pic.twitter.com/WpAVknEDsQ

Have you ever encountered “American food” when you’ve been in another country?

If so, tell us about it in the comments.

And share some pics too if you have them!