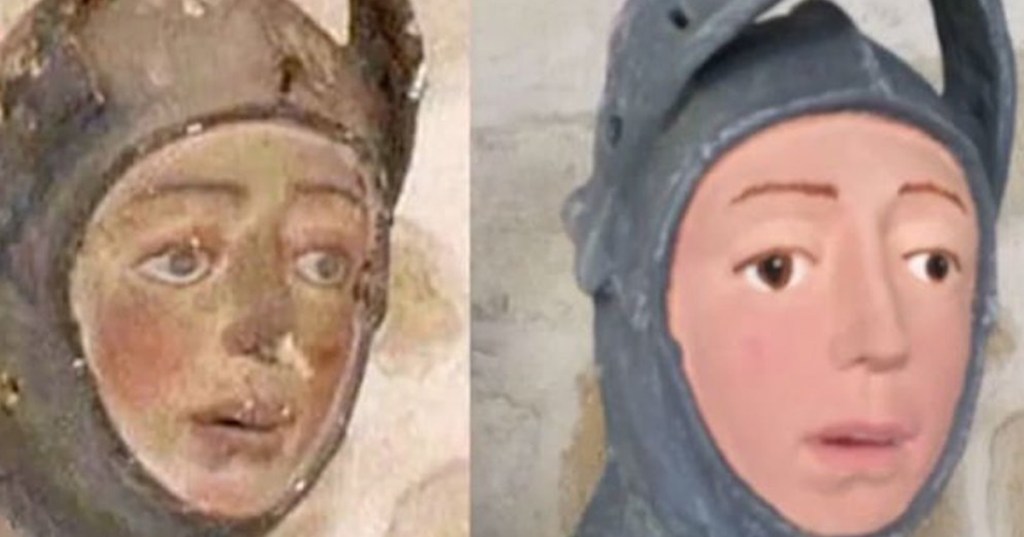 Art restoration is the act of returning a work of art to its original condition, or as close as possible. It’s an expensive, painstaking process undertaken by skilled professionals. Usually this work takes place behind the scenes at major museums.

If you’re an art restorer, there are really only two ways you can make international news: one is by completing a difficult project, like when a team of restorers at the Metropolitan Museum of Art worked for 10 months to restore Charles Le Brun’s 1660 painting of Everhard Jabach and his Family.

The other way to make the news is by screwing up so badly that a priceless work of art is ruined. Remember when Spanish grandma and amateur art restorer Cecilia Giménez attempted to restore a 19th century painting of Jesus, on her own volition? Of course you do, but we’ll take any excuse to look at it again: 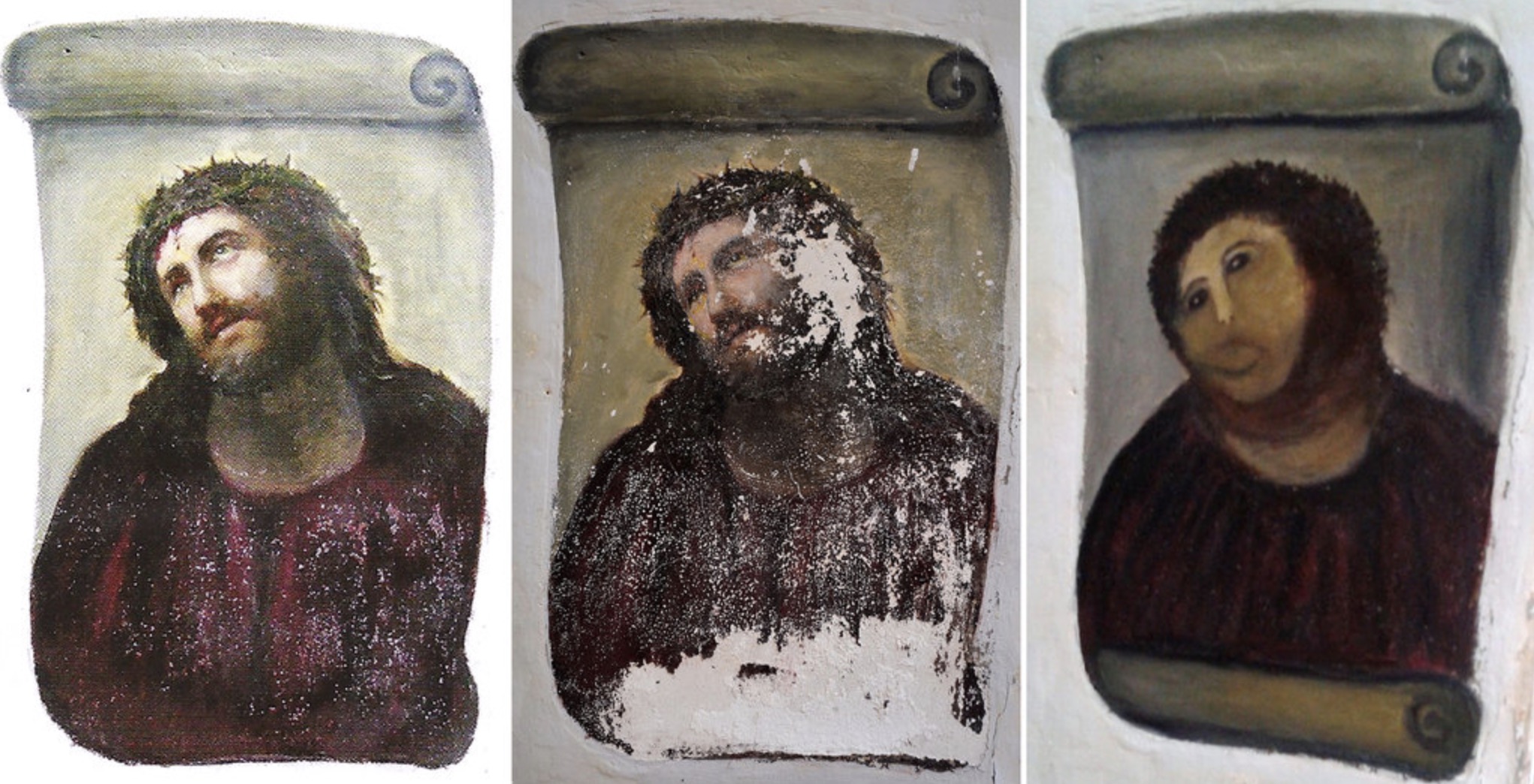 It never gets old.

Well, folks, art restoration is in the news again, and it’s not because someone did something amazing.

This story takes us back to Spain, to the northern town of Estrella, where the St. Michael’s Church is located. For the past 500 years, St. Michael’s has displayed a wooden statue of the legendary St. George. The Christian martyr is triumphantly seated atop his horse, moments after slaying the dragon. 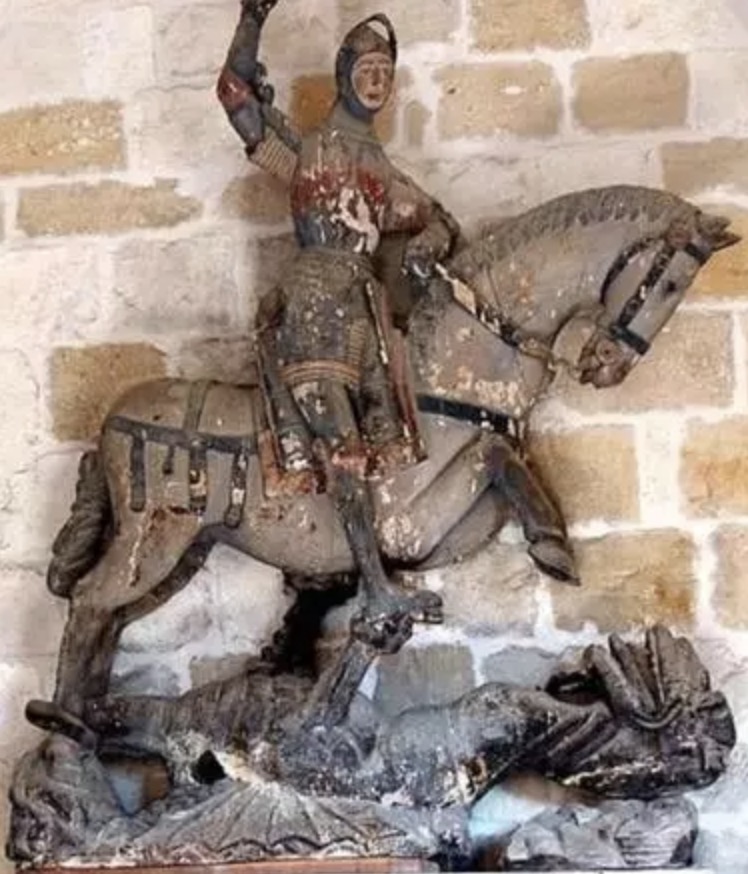 The statue is priceless, and not just because of its age and its religious significance. It’s also an example of a statue that was made with a “polychrome” painting style. That’s when a painter would use a variety of colors of paint to decorate a work of art. Polychrome statues have been around since classical times. (Fun fact: the white marble statues we know from Greek and Roman history were actually painted with vibrant colors!)

It’s rare for polychrome artwork to survive into the 21st century with its original paint intact. Most polychrome artwork was either destroyed during the Protestant Reformation or simply lost its paint to erosion. Only a few polychrome wooden sculptures from the 1500’s have been successfully restored, like The Lamentation of Christ at the Maestro San Pablo monastery in Valladolid, Spain. 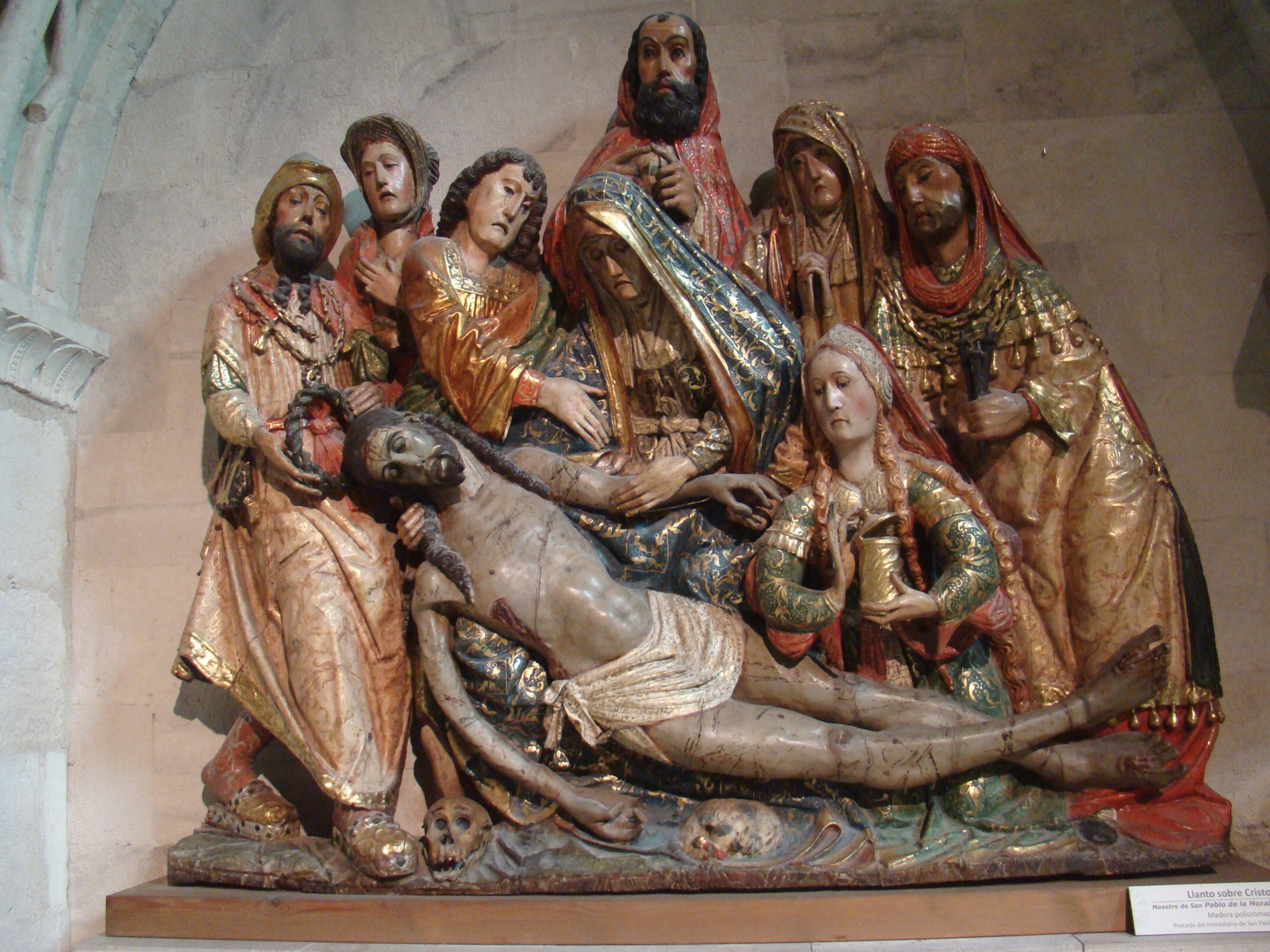 So the fact that St. Michaels has a statue from 1500s at all is remarkable, even if that paint is chipped and faded. Nevertheless, the parishioners decided he needed a facelift. 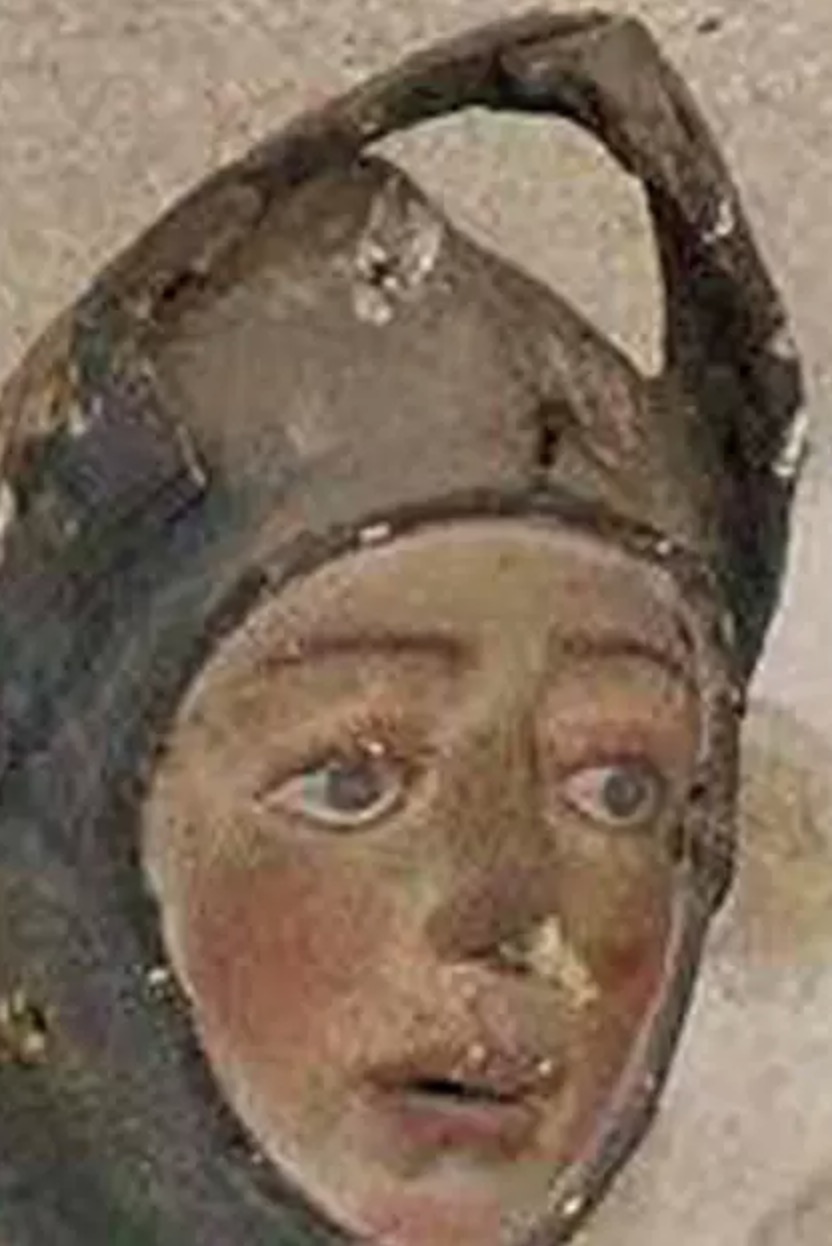 A restoration project like this requires a team of experts with advanced degrees, years of experience, and a hefty budget. Did St. Michael’s Church hire one of the region’s many accomplished art restorers? Nope! Instead, they went with a local workshop called Karmacolor that specializes in furniture repair and children’s arts and crafts.

How did Karmacolor do? Well… 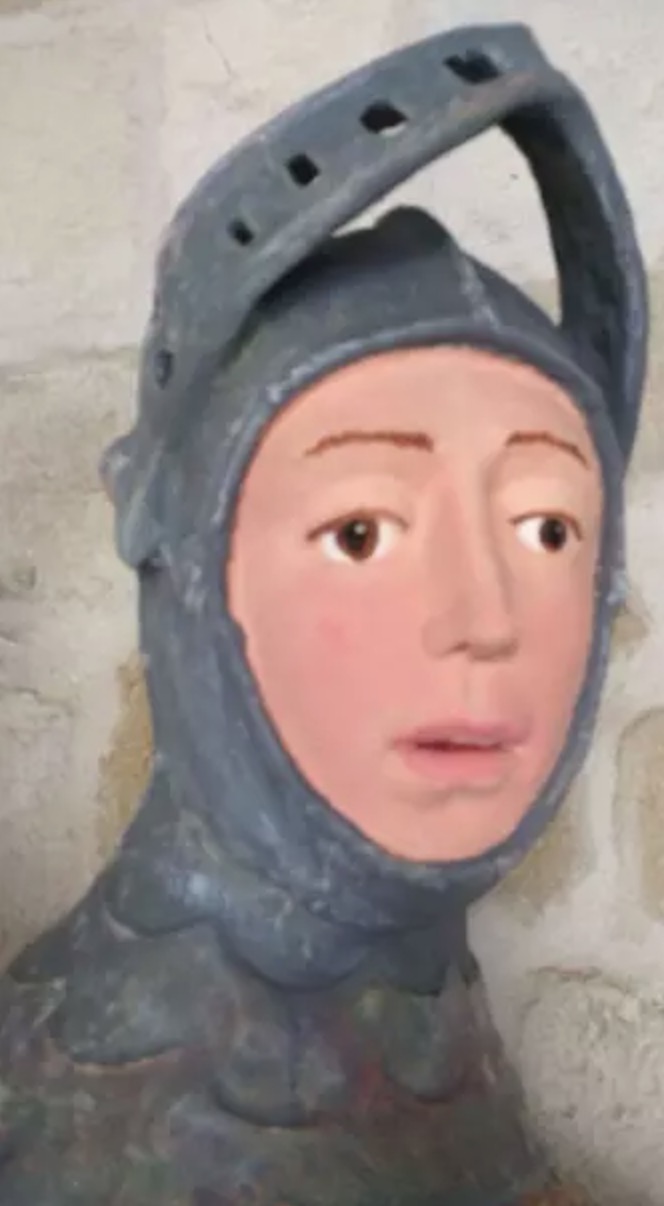 There’s some dispute over who’s really at fault here. Estrella mayor Koldo Leoz says the church hired Karmacolor without consulting the town or regional government, while St. Michael’s parish priest claims he only hired the company to clean the sculpture, not restore it.

But the damage was done, and St. George’s once impressively detailed armor is now slathered with red and gray paint. 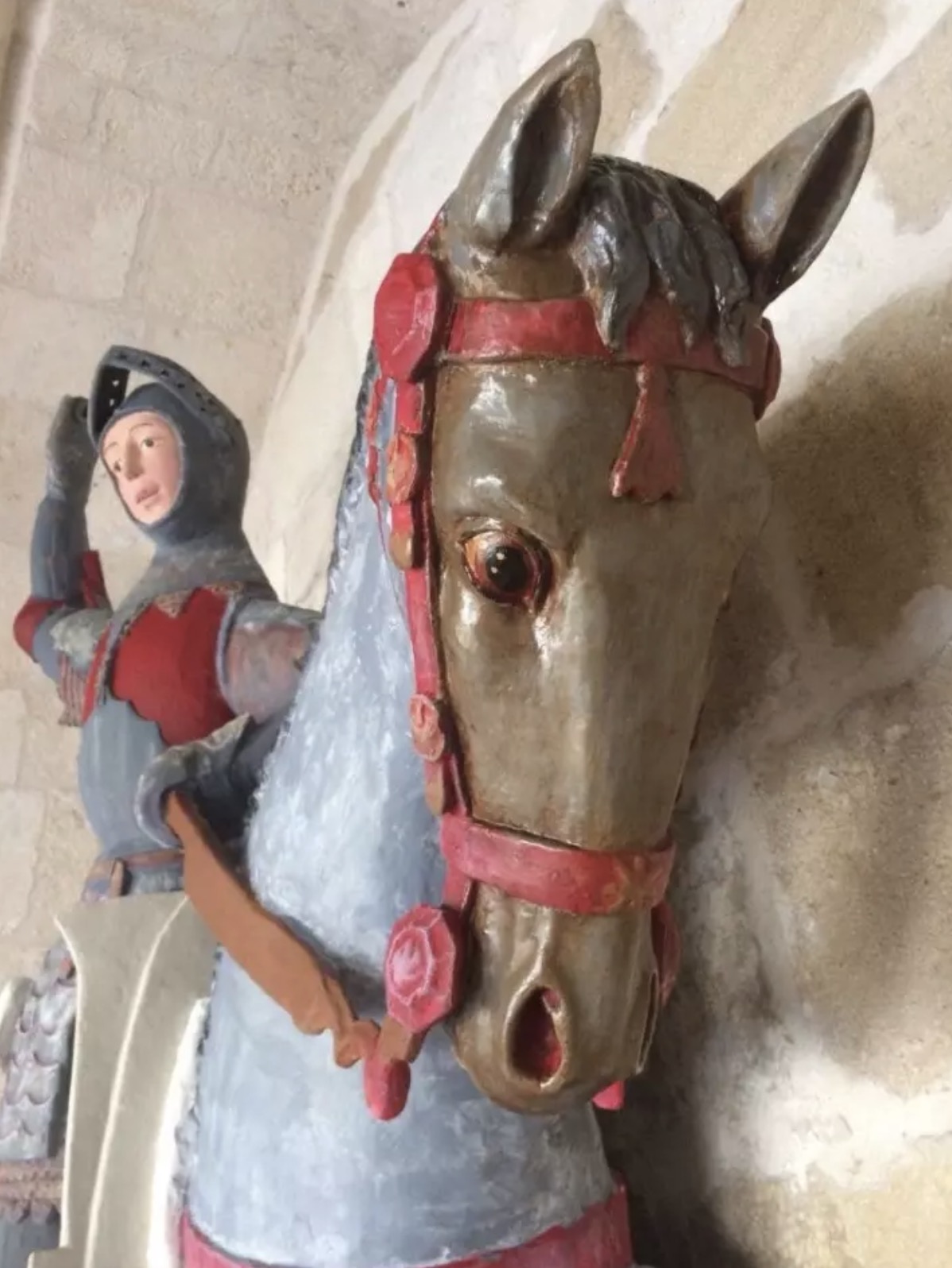 The St. George statue was a point of pride for the town, and locals are devastated. “People are disappointed and sad,” said Mayor Leoz. “Estella used to be known as a place that took care of its heritage, now we’re famous for the opposite.” Mayor Leoz is currently looking into whether the botched restoration can be fixed, including the details on St. George’s armor, but the outlook isn’t good.

Meanwhile, Carmen Usúa, who owns a regional art restoration company, couldn’t believe how amateurish it was. “I saw photographs of the atrocity they were committing,” she said. “As a professional, I feel disconcerted and very offended. It takes years to acquire the skills necessary to carry out these kind of restorations, so imagine the frustration when something like this happens.”

But on the Internet, people were mostly amused. One guy thought the restored St. George looks more like a Playmobile toy: 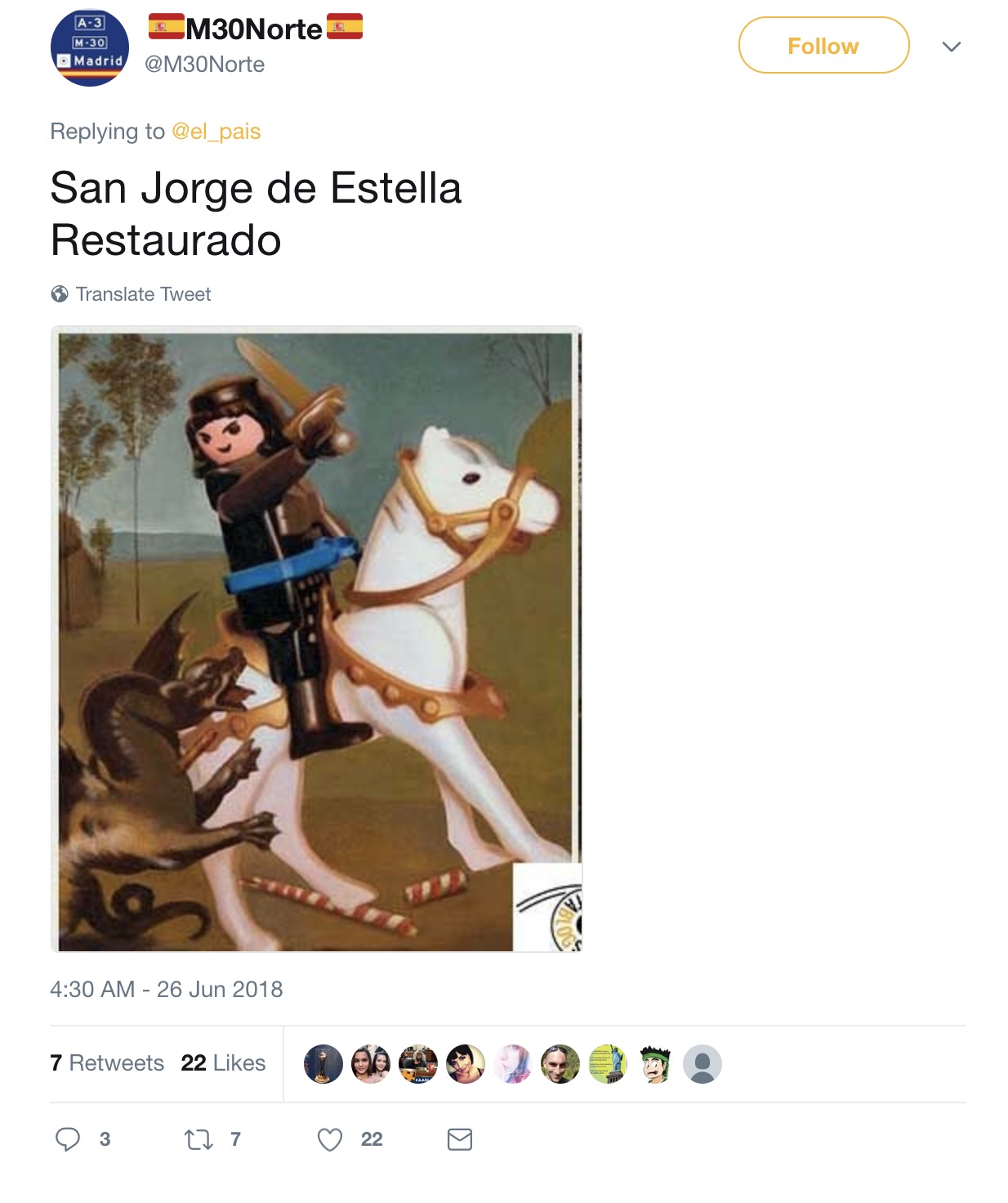 Another was reminded of Tin Tin: 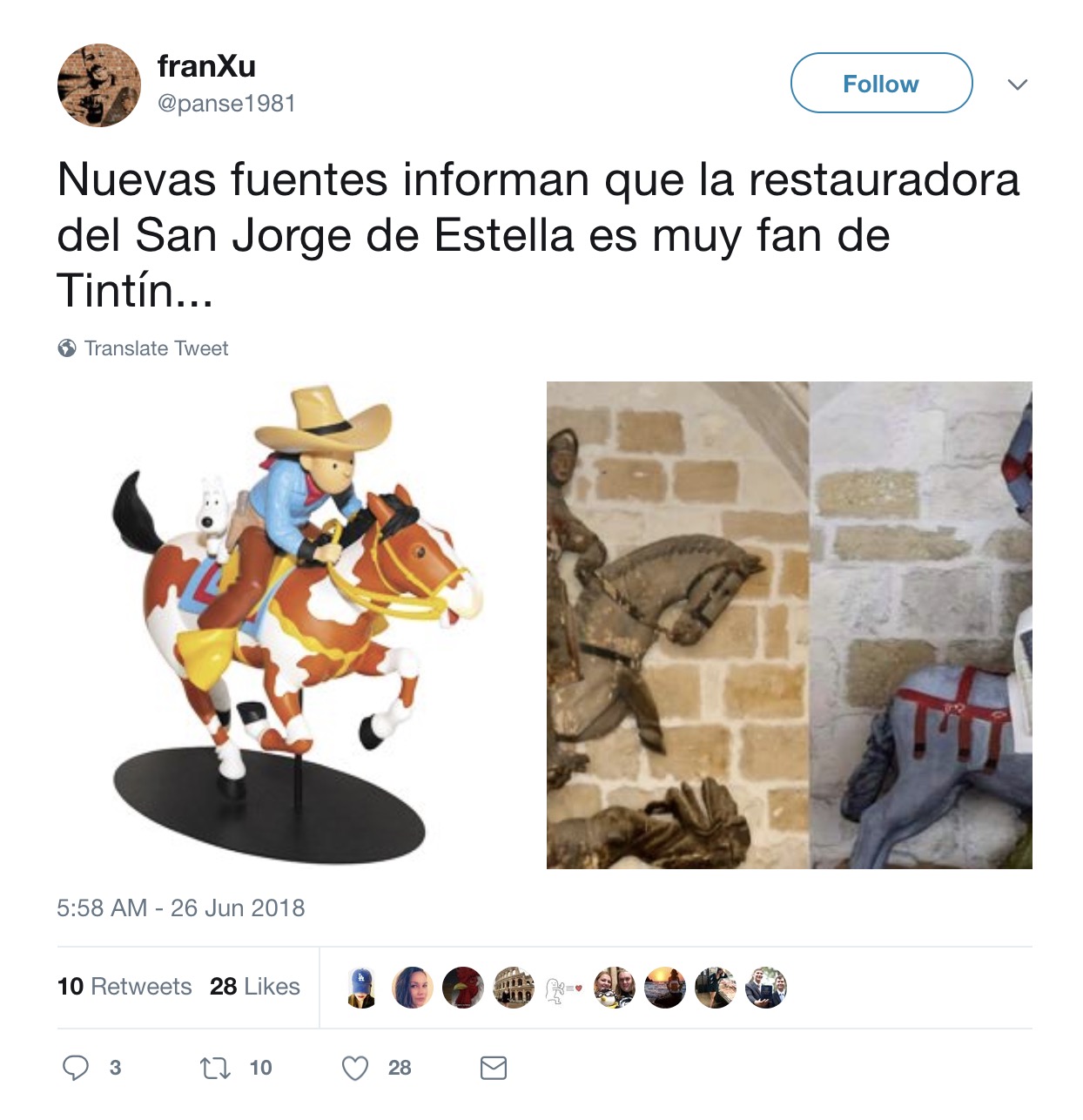 And another went with Nicholas Cage: 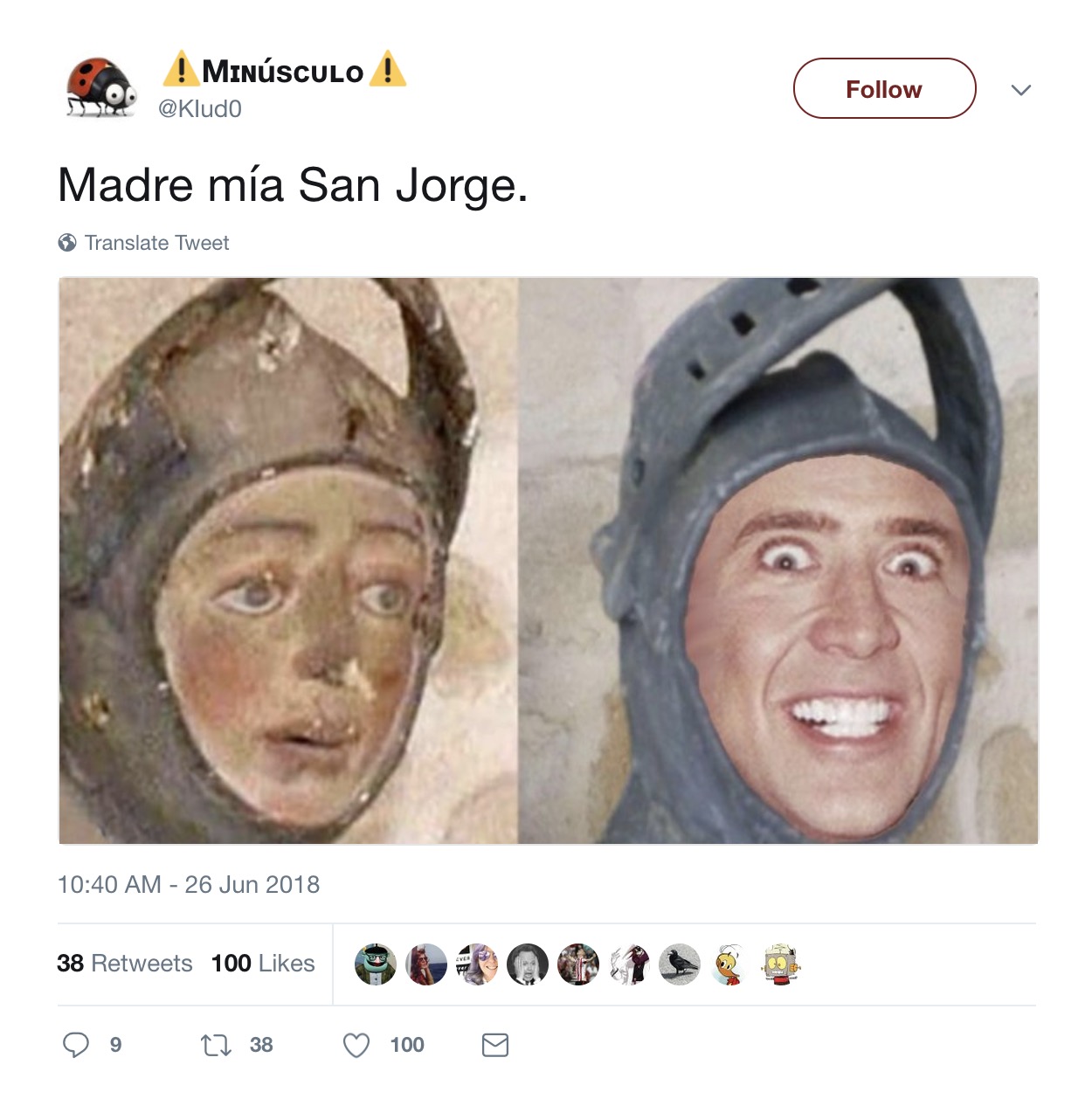 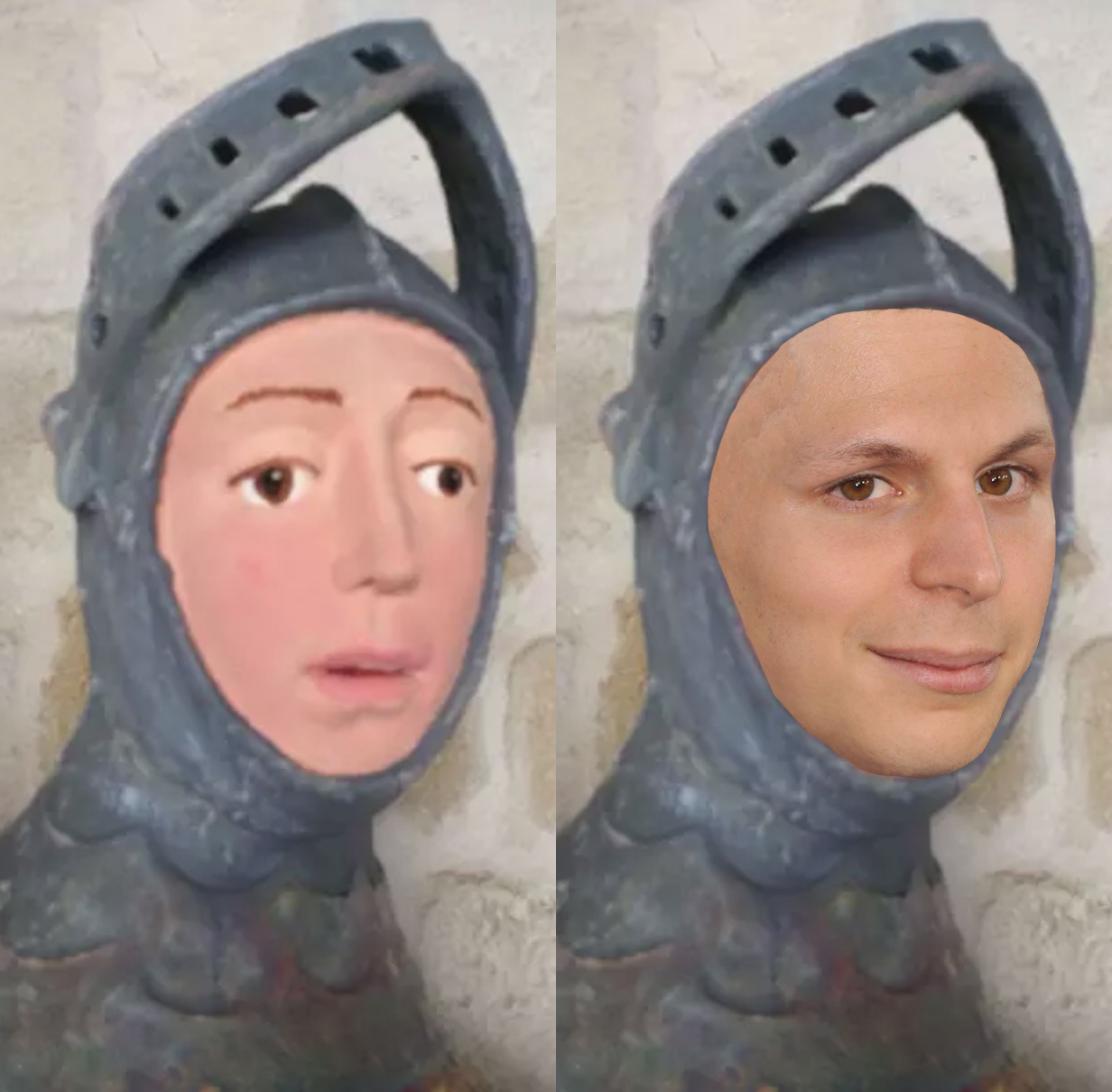 But hey, there must might be a bright side for the people of Estrella. After the Jesus fresco restoration was botched back in 2012, tourist traveled to the town of Borja just to see it, and the local economy was revitalized. Someday soon you might be able to buy a shirt that says, “I Saw Doofy St. George and All I Got Was This Lousy T-Shirt.”