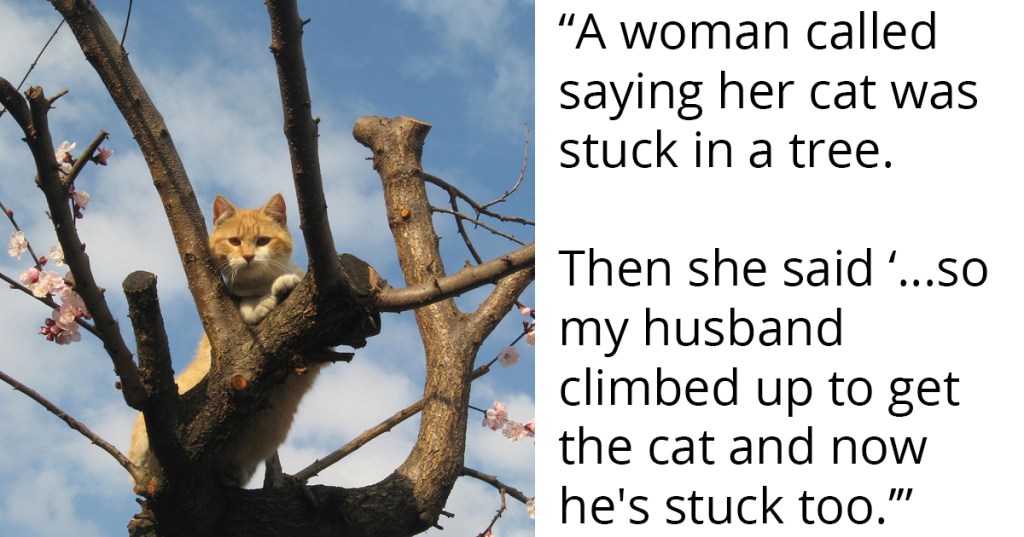 When we’re kids, we get it drilled into our heads that we’re only supposed to call 911 in the case of an actual emergency. They say this to free up the phone lines for people who truly need help, but I’m willing to be there’s another reason: because idiots are calling 911 all day long, and the folks at 911 just want it to STOP FOR THE LOVE OF GOD.

Last year, a Redditor posted a question on the r/AskReddit subreddit asking 911 operators to share the stupidest calls they’ve ever received. And the thread exploded. Thousands of people posted over 8,000 comments, sharing stories of the most idiotic reasons people have called 911, (or for international cases, 999), and we’ve got the funniest 15 of them for you reading pleasure. (via Bored Panda)

The general public is terrifying, y’all.

Breathless, panicky voice ‘How do I get the cranberry sauce out of the can without it coming out in chunks?’

‘Open the other end and slide it out on a plate.’

‘OH! THANK YOU! You are brilliant!’

I wasn’t considered so brilliant once I had to dispatch an officer over there to educate her on proper 9-1-1 usage. Merry Christmas, here’s your citation.”

“A woman dialed 999 to say there were men in her house trying to take her away. The men in question were police officers who had come to arrest her.”

“The best story I have is a guy who called about a bobcat in front of the library. He called up out of breath and said there was a wild cat intimidating people so they could not enter or exit the building.

I was fairly close so I started to run over. I asked if anyone was injured and he said no. I was expecting a group of people held up at the entrance by a huge cat hissing at everyone. I told him to keep away from it and stay on the line.

When I got there I found a tabby cat perched on a bench.

I verified the caller and the cat he called about. I went over to the cat with him and started pet him, he rolled over and let me scratch his belly.

The guy was shocked and said “oh, someone has domesticated it.”

“One guy called FRANTICALLY saying that he saw the dead body of a young woman, early 20s, wearing nothing but shorts. He gave a detailed description, hair color, skin color, body position, the whole bit and said she was by the side of the interstate (in the middle of an affluent suburban area at rush hour) so we figured this had to be a really fresh crime scene.

We started scrambling together officers to get there ASAP, a big hassle considering it’s rush hour and they’re all dealing with accidents and stuff like that. On top of that, we can’t say what the issue is on the radio is because we have too many busybodies who monitor police radio, then call us to try to get juicy details, or otherwise meddle. So we have to get these officers to their cars to read the computer, leaving other issues, etc. And these are suburban cops in the Midwest, a murder is a damn big deal.

The guy calls back a few minutes later. ‘Uh, I checked again, it’s a dead deer.’

Peeved, I announce on the radio that the trip is cancelled. An officer sarcastically calls back: ‘With shorts on?'”

‘A quite pregnant (don’t remember exactly how far along, but definitely past 30 weeks) woman calls to say that her doctor told her to refrain from having sex for the rest of the pregnancy and she didn’t understand why. I looked at her file, and saw she was having pre-term contractions, so I explained that sexual activity can cause contractions, so it was safer to abstain so the baby could stay inside as long as possible.

She tearfully exclaims, “But how will I feed the baby?!?”

The patient was convinced that her baby was living off of her boyfriend’s semen, and that it would starve if they stopped having sex. I explained about the umbilical cord, etc. but she refused to believe me until I asked her about single moms, lesbian moms, etc. and asked how she though their babies fed and grew.

After a moment of silence, she thanked me, and started to hang up the phone, but not before I heard her screaming her boyfriends name.

That man had a good thing going for a while there. I honestly wasn’t sure if I felt more sorry for him, or a baby growing up in that household.’

7. This is why you should never wear cologne

“One time, some guy called 911 because he had multiple women in his bed that he didn’t know and who refused to leave.”

“I’m not a dispatcher, but back in my EMS days I was dispatched on a call of a child being poisoned. Upon our arrival we find a 14 year old male and his mother. The mother was insisting we take them to the hospital so he could have his stomach pumped because he had swallowed chewing gum. The child was looking at us as if to say, ‘I’m sorry my mother is crazy.’

One year later, same address, same family, called for poisoning. Upon arrival we find the same kid and mother. The mother wanted to be taken to the hospital because the kid had admitted to his mother that he had taken a hit of marijuana when he was visiting friends the week before.

The kid had the same look on his face.”

Drunk guy: At the convenient store. This guy won’t sell me beer.

Me: Without an ID the clerk can not sell to you, especially if you are under age.

Drunk Guy: But other clerks let me bribe them before. I told him that and he still won’t take my bribe and sell to me. Make him take the bribe!

Me: We won’t force the clerk to accept your bribe. And definitely won’t let him sell to a minor. Do you want to wait there and I can have an officer come talk to you in person?

Drunk Guy: Yea, I will sit outside and wait for you.”

10. Well, they ARE addictive

“My uncle was a dispatcher in a suburb of Minneapolis/St.Paul, and would tell me stories whenever I saw him. My favorite goes like this:

Caller: Yes, I’d like to report two suspicious vehicles passing something back and forth in Potawatomi park.

Uncle: Ok, we’ll send an officer out to assess.

Uncle: Dispatch to car 45, two suspicious vehicles in Potawatomi park, passing items back and forth.

“Not an operator, but my boyfriend who called in.

He usually worked a late shift, walking home about 2 am. This shift he got off work a few hours late…

BF: I’d like to call and report a fire. [We live in a fire prone area and it was the season.]

BF: On the hillside just East of [City].

911: Can you be more specific? [Typing away in the background.]

BF: Yes, [gives a more detailed location]. Oh god, it’s getting bigger! The whole top of the hill is on fire now!

BF: It’s getting bigger! Doesn’t anybody else see this?! It’s lighting up the sky around it…it’s huge! Oh god! Oh…oh, wait…

BF: I am SO sorry…I’m not usually out this time of night, I just got off work late…that’s, that’s the sun…

BF: I am so, so sorry for wasting your time, there is no fire, that’s just the sun rising. Never mind. I’m really embarrassed…

EDIT: Boyfriend said I forgot a detail so I added it in.”

12. Caught in the crossfire

“One woman called because she thought her house was being shot at. Turns out she forgot about her eggs boiling on the stove and they exploded. I wanted to give her a hug though, she was just a little old lady.”

13. Is it me, or does Frosty look yellow today?

“Got a call from a man that someone vandalized his snowman.”

14. This is why we write our names on things, fellas

“Guy who called to swear out a complaint against his roommate because the guy stole his heroin. Yes, they both got a ride.”

I need an ambulance

I just, I need an ambulance

Can you tell me why?”

My dick is stuck in the wall OKAY?!

Please stay on the line for Fire/Rescue.”