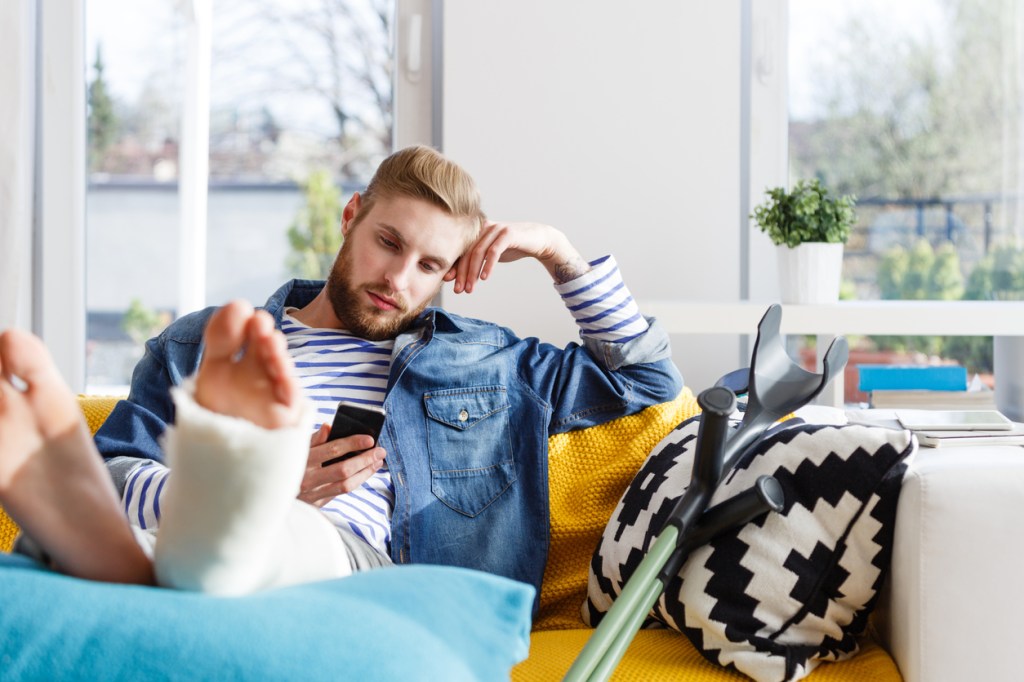 26 People Who Hurt Themselves in Really Dumb Ways

Check out these 26 AskReddit users who shared stories of injuries we all definitely would have laughed at before going to make sure they were okay.

I sat on the toilet too long and my legs fell asleep. I stood up, my leg buckled, and I went head first into the wall.

One time I tried to fart while playing online poker really late when my girlfriend was asleep. About half of the fart came out before I realized more was on its way out too. I caught that before it was too late and jumped up and started to run to the bathroom. I had headphones on, so as I yanked my head to the left, I pulled my computer tower over as I kicked a 25 lb weight on the floor, broke my toe, and then pooped all over myself.

I tried jumping over a bonfire, and I hit someone mid-air who had the same idea.

I won because I didn’t need 3 weeks in the burn unit; just a bottle of aloe vera cream.

I was laying under my sister’s bed messing around with her nail varnish. Just dipping the brush in and out if I remember right. I forgot about gravity though, and a drop of the varnish went in my eye. I can’t even describe the pain. If I had to try, I’d say it was like getting nail varnish in your eye.

My foreman was hammering some framing in place and had to knock the wood toward him. So he reached around and was swinging his hammer toward himself. It was a difficult angle and a tight fit, so he was swinging with a bit of velocity. He ended up missing and hitting himself in the forehead. He knocked himself out cold and left a big lump for everyone to see. No one has let him forget about it since. Whenever he asks the boss to do something, the boss says ‘Yeah, knock yourself out.’

The knife I was trying to cut a cucumber with wouldn’t cut, so I used my index finger to push down on the blade. I just assumed it was a blunt knife.

However, the knife was just upside-down. I cut my finger and had to get 4 stitches.

As a child, I was messing around with the cigarette lighter in the family car. I ‘knew’ that once the lighter bit stopped being orange, that meant it must have cooled off. It hadn’t.

I climbed a tree when I was about 12, fell down, and broke my left arm.

A week or so later, my friends dared me to climb the same tree with my left arm in a cast up to my elbow. I actually got a branch higher than the first time. Then I fell down and broke my right arm.

Mum wasn’t happy about having to take me back to the hospital to get the other arm put in a cast!

I had finished ironing and wanted to check if the iron was still hot before putting it away. I was in a silly mood and I decided, for reasons which are still unknown to me, to check the temperature of the iron by putting my mouth over the top of it.

I ended up burning my bottom lip and tongue pretty bad. Luckily there was no permanent damage; unluckily, there was no chance of my brother (who was also there) ever letting me forget it.

Years ago, I knew a bunch of guys that once played beach soccer with an empty green coconut. It works since, instead of kicking, you kinda use your foot to fling the ball.

Everybody was having fun until somebody did a high pass and Carlos tried to headbutt it into the goal. Carlos went to the hospital that day.

I wanted to see if I could force myself to bite a chunk out of my skin!

Spoiler alert: I could.

When I was 9, my sisters locked me outside of our house on the porch. The only problem was that I had to use the toilet really bad. I screamed and begged them to let me in, but they wouldn’t budge. So I pounded on the window until, suddenly, my hand went completely through, shattering the pane and wedging shards of glass in my hand.

I didn’t have to use the toilet after that.

13. I have this same reflex

While I was cutting a cake for a friends birthday, I accidentally dropped the knife and attempted to catch it with my foot.

My friend threw his keys at me. Instead of catching them, I leaned back like in The Matrix to avoid them. I then proceeded to fall back while turning. This resulted in my face slamming into the wall.

And of course, this was during the few minutes we had before our gym lesson started. The whole class saw it.

15. All for an invisible bruise

I woke up one morning and my thigh felt like it might be bruised. I couldn’t see any bruises, so I headed into the bathroom and propped my leg up on the bath to see if I was missing anything. I was a little too short, and when I shifted my weight onto my leg, my foot slipped and my head slammed forward into the sink, damaging my chin. So I had to walk around with a split open chin for a week or two.

I wanted to jump out of the bath two legs at once, but my feet hit the edge. I hit the floor with my face and got a concussion.

I was looking at my phone while sitting on my parents’ motorcycle in the garage. The pipes were hot and I didn’t realize it. My leg was resting up against the pipe, but it was so hot that it killed the nerve endings. When I got up, I was missing skin. I didn’t know what to do. It took months to heal, and the feeling is now back after ten years.

Quite recently I was watching Netflix while doing the dishes. I had a dirty gross knife in my hand and was watching some comedy special.

Without paying attention to what I was doing, I started flicking the knife about, spinning it with my index and middle finger. Sure enough, it leapt from my hand and stabbed me in the boob. Not deep, but it bled through my shirt.

Both my [brother] and I got stupid injuries in one day

I was running down the hallway at home, tripped over a toy, and put my head through the drywall. I got three stitches in my forehead.

Coming back home from the ER, my brother fell out of our van and cut his lip WIDE open on the gravel driveway.

My dad just yelled, “EVERYBODY BACK IN THE VAN!”

The doctor had a good belly laugh when he saw us back at the ER.

Not me, but my mate actually stuck his finger into a running electrical fan.

I was trying to be like Willow Smith. While singing “Whip my hair” I swung my head, hit a counter and knocked myself out.

I shut a car door on my face this morning, so probably that.

Hmmm… It could have been the time I broke my elbow playing nerf basketball in the fifth grade.

Or maybe the time I permanently dented my shin by tripping up the basement steps while fleeing from a “ghost” when I was in the eighth grade.

Or that time last Friday when I was walking — just walking, and got distracted by a bird, tripped over a shrub root, and ate dirt in front of my coworkers. I now have a fantastically gnarly brush burn on my arm.

When I was 4 years old, I wondered what would happen if I did a somersault down the stairs. So I tried it. I ended up crying and breaking an ankle.

25. Worms don’t have teeth, so that’s probably why it ended that way

Busted my teeth on the floor while doing the worm at a middle school dance.

So I was trying to dislodge ice that had built up in the freezer.

Thought process at the time: “I’ll use a butter knife to chip away at the ice – it’s not sharp, how can I hurt myself?”

I slipped with my left hand (holding the butter knife) and with brute force severed the little finger on my right hand.

At least my hand was cold from being in the freezer for so long, that I didn’t actually feel it to start with. Also, the finger was immediately on ice.

All good though – got it reattached that afternoon and I still have about 95% functionality. Needless to say, I am now banned from defrosting the freezer.

18 Giant Mistakes Made by the Intern

15 Of The Worst Examples Of Airplane Etiquette