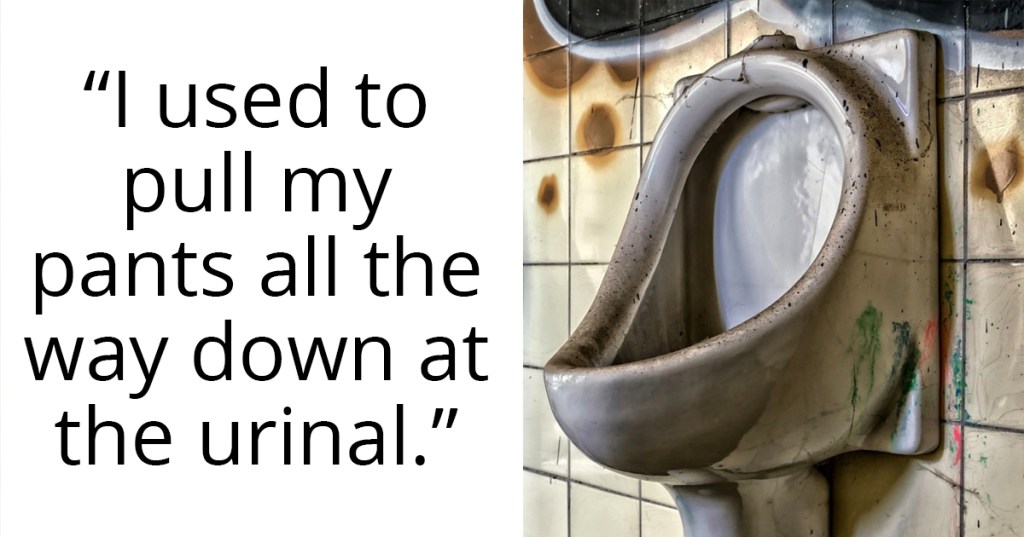 Our daily lives are made up of thousands of little activities, everything from flushing the toilet to locking the door behind us as we leave our house. We learn most of these skills when we’re young, and eventually they become automatic.

But that’s a lot of small actions, and there’s no way anyone could learn to do all of them perfectly. Instead, there are some actions that we just kind of muddle our way through. Back in kindergarten, I was never able to learn how to tie my shoes the “correct” way, and to this day I still tie them the “easy” way–i.e. the “two bunny ears” technique.

We all do a few things “wrong.” Recently on Reddit, someone posted an Ask Reddit thread asking people to share the things they realized they’ve been doing incorrectly their entire lives. Here are 15 of the best responses.

1. The idiot savant. Emphasis on “idiot.”

“I taught myself how to play clarinet. Six months later someone told me that I’d been playing with the mouthpiece upside down.” – Aleriya

2. You can never be too careful with backsplash.

“I used to pull my pants down all the way at the urinal.” – _Colonel_Mustard_

3. It’s not just a fancy keychain!

“One day I used the key fob to remotely start my dads car. It was an”oh shit” moment for him. Two years and he didn’t realize he had this handy little function.” – boymonkey0412

“When i first got a debit card and would go out to eat at restaurants with my friends, i would leave a cash tip on the table. when i got the receipt to put how much i was paying i would write down how much money i left on the table. for at least 6 months i gave double tips to every waitress i had.” – JanetJamm

“My family always had a cup next to the bathroom sink in case you needed to rinse your mouth after brushing your teeth or maybe get a quick drink of water in the middle of the night. My grandma had the same cup at her house. I used it for years whenever I was thirsty. One day she saw me doing this and said, ‘Don’t use that cup. Thats where grandma puts her teeth.'” – milwbrewsox

6. Her roommate must have been (puts on sunglasses) incensed.

“Found out I was lighting incense wrong. Boyfriend and I got a bunch to add to our collection of nice smells and we would light them and they would just start a little inferno. Convinced we were buying cheap, garbage incense we stopped using them. I proceed to buy a different brand in a hope those would work. I test light and same thing it just goes up in an inferno. Roommate informs us you are supposed to blow them out once they catch. Oops.” – gorbaby

“I used to fill the kettle by the spout… my parents have always done it this way, I thought the center part was mainly for decoration, but not functional. I don’t know why I never questioned this.

One day I bought a new tea kettle and my husband was like wtf what is inside this, and with great ease, opened the center to pull out a manual with instructions and what not.

I was drinking dirty paper water for like 2 weeks.” – supdawwwwgwife

“Well… This was a few years ago. I was the director of IT for a very large company. I was given a new cellphone and told to setup my voicemail.

I don’t know that when I recorded my name it would be played to whomever I leave a voice mail for.

Well the name I recorded was, “Dooder84 Corporate IT Godddd!!!”

I worked there for 4 years until someone in the hallway referred to me as the “corporate IT GoD!”

9. Blue is the warmest color.

“I owned a light blue colored microwave for about three years that a family member gave me for a housewarming gift. Thought it was cool; never saw a blue microwave before. One night, a buddy asked why I never took the blue plastic wrap off my microwave, then proceeded to peel it off for me. Damn; that bitch is silver. Still miss my blue microwave sometimes though.” – Id_Rather_B_Lurking

“I didn’t realise I had to brush the BACK of my teeth as well as the front (I was a dumb kid – I blame toothpaste adverts) unto I was 15. Had 9 filings and a root canal.” – matthewmcorry

I was always wondering who the hell adam was, thought it was a stupid phrase.” – MaxisDidNothingWrong

“After moving to a new city I went to the laundromat and the Korean lady working was yelling at me about something I couldn’t understand. After some pantomime it became clear that she was upset I was putting in the wrong detergent but it was the same kind I have been using for 8 years (since moving away to college and behind). Turns out I’ve been washing my clothes with only fabric softener for nearly a decade. They always smelled good so I never really thought about it. Not my proudest moment.” – KyloWrench

“No one really ever told me you don’t need to buy shoes with the ‘two-fingers’ space in front of the toes after your feet stop growing.

I had been buying an entire size too big until about age 23.

One day in college I decided to try a pair of Merrell barefoot type shoes and after reading the sizing guide, BAM. Mind blown.

It’s terribly obvious mistake I (29F) like to blame on being an only child. But really I’m just a moron.” – tiffblan

“Not mine, but my dad has been spelling his name wrong his whole life (he’s 51). His name is Jeffrey, and he’s been spelling it like that since he learned how to spell his name. A few months ago my mom pulled out his birth certificate, and we all learned it’s actually spelled Jeffery. Not sure if he spells it correctly now, but it was definitely an ‘oh shit’ moment for him.” – daniwthekilo

“My girlfriend recently explained that a pony is, in fact, NOT a baby horse.

Edit: For those asking, I’ve always used foal and pony interchangeably. She and I were driving and saw some small horses and I used the wrong term. She said “honey bunny”, patted me on the head, and has been giving me periodic crap ever since.” – Fit_Official