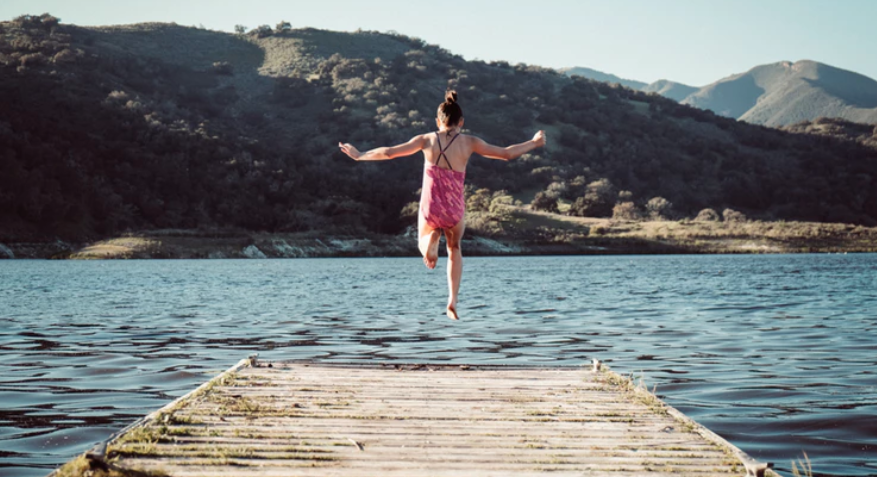 Sometimes you just have to take a leap, right? As the great Wayne Gretzky once said, “You miss 100% of the shots you don’t take.”

These people on AskReddit shared their personal stories of how taking a leap of faith led them to pretty serious success.

“Two years ago, I applied to a super competitive master’s program. I didn’t have the grades or anything, but took a chance. Ended up getting in after being placed in the waitlist. I graduated and I’m now preparing for my boards… anything is possible.”

“My biggest (not most recent) was when I got rejected from the nursing program at my local university. Wasn’t good enough for nursing, which is very competitive to get into, but they offered me a spot in the faculty of science. I was going to decline.

My husband encouraged me to use the opportunity to work towards my lifelong dream. So we scrounged up the deposit to secure my spot and despite having a couple of very young kids at home, I threw myself into full time studies and earned really good grades from the get-go.

This spring I graduated from medical school and am currently having an absolute blast in residency.

Wasn’t good enough for nursing, but I’m a pretty decent doctor so far. :)”

“Worked up the guts to let my employer know I need more time off work to take care of a family member. I’m really non confrontational so I was really worried about it.

Currently watching baseball with my dad at home.”

“My biggest was when I saw this cute girl at a resort bar in the Florida Keys, I wedged myself in next to her to order a drink and started a conversation.

We’re married 26 years as of earlier this month.

5. Banana bread for the win

“There was this girl that I kind of fancied for a while from high school (A few years ago), and then one day just decided to talk to her and whatnot; got into a great rolling conversation that lasted days, and I did end up bragging about my Banana Bread. That lead to her wanting to come over to see if it was that good, and we just hit it off even better in person and she liked my Banana Bread and we’ve been dating for almost 9 months now.”

“On a school trip to the local community college for their “Business Leadership” day, I signed up for every single test (they had prizes) and ended up winning a full-ride scholarship despite only having 1/2 a year of Accounting I under my belt.”

“During my 2L year of law school I went to a lunch meeting in a classroom with probably 120 seats available and only 10 occupied. There was a really beautiful brunette sitting in the very back row alone. While it would have potentially seemed really weird to sit right next to her I decided to give it a shot in the off-chance she might end up interested in me. We started talking, introduced each other, and ended up grabbing lunch. Two years later I’m looking at engagement rings for that same beautiful brunette.”

“Called an old buddy of mine in LA about a job, unhappy with where I currently am. Ask and you shall receive, I suppose. I am moving 3,000 miles away for an excellent job with an excellent company.”

“Not recent, but my best case of taking a shot. When I was in 6th grade I was a chubby little need that wore Marvin the marcian shirts. My first day at my new school I saw this cute emo girl but was too scared to talk to her. One day in the computer class I had with her we got an assignment to make a PowerPoint on sh-t we like, pretty much telling everyone about you.

I was scared to talk to her so I just put some metal music my brother showed me in my PowerPoint. It worked though, she came over and started talking to me about the music. We’ve been best friends for 6 years now, even through all our moves we still text a lot, not as often as we used too, but that’s to be expected considering we have a lot more responsibilities now.”

“Found an old crush from middle school on IG months ago. Always thought she was out of my league, I hit her with a smooth DM and now shes my gf =) “

“I really wanted a tattoo from a well-known tattoo artist in Copenhagen, but figured it would never happen in a million years. A friend told me to cut the sh-t. I reached out to the artist and it looks like I’ll be tattooed by him in 2020 (my year choice, he’s not booked that far yet).”

“Lady came into my store and tells me she’s the new bank manager in the area. We talk and I eventually reveal I also do real estate. She tells me she has three houses for sale for about 160k. I tell her I will drive by and look at them, they looked ok and I told her I could make an offer in six months or so when I had some money freed up. She comes in a week later with her phone in her hand saying she actually has a total of ten houses she’s trying to sell. She thinks they are all in terrible condition, I do flips and can tell they need about 10k in cosmetic work.

She just wants to get rid of them so she says she’s about to send an email to a guy to sell them all for 250k total. I tell her I will buy them cash by the end of the week for that amount. I call my dad as I know he’s on the market, he freaks out and gets some money together. He signs and purchases them by the end of the week, then surprises me by giving me a 10% stake as a finder’s fee.

After a disheartening meeting with HR about my pay, I angrily went back up to my office and applied for school. I literally went to the local colleges website, pulled up its report on new grads, and picked something that looked promising. Applied because I realized I was never going to be properly financially rewarded working for a non profit in social services. The non profit I work for is generally good and while I was upset with the meeting, I realized no one else was going to pay me what I was worth.

The program I applied for was competitive and I didn’t think I’d get in and if I did get in I probably wouldn’t go… well sh-t, I got in. Even then I waffled on paying my deposit because I thought I’d never have the courage to quit my job and go back to school. Thought about it and figured I needed to take a shot. I’m not happy with my career and if I’m going to do this, now is the time.

Anyways I quit my underpaid job last week. I go back to school in the fall.”

“I’ve loved drawing for pretty much all of my life, but was discouraged from pursuing it as a career due to my parents and other things. I went to college, became a programmer for a few years, and then realized that I wasn’t very happy. Eventually, I quit my job and I’m now a freelance artist. I figured, why not, I’m young and I’m allowed to make mistakes. I’d rather think “Oh well, at least I tried!” if I failed than to wonder what my life could’ve been. After I told people about it, I was really surprised at the amount of support I got from my friends and from people online!

It’s scary, but at least I have savings to stay afloat for a while and I’m a lot happier with my life now.”

“Met the girl of my dreams while backpacking almost exactly 7 years ago. We were both broke and in college, not to mention from different companies. We spoke every night at the hostel and went for a midnight walk with each other almost every night. The day she’s leaving we joke about how the only way we’d manage to end up together would be marriage – “you’d only need to get me a ring pop” she says.

A lot of Facebook messages, Skype calls, postcards and even the odd fight later, I finally bought that ring pop.

We are submitting our visa paperwork in 6 weeks and I’m preparing to move across the Atlantic.”