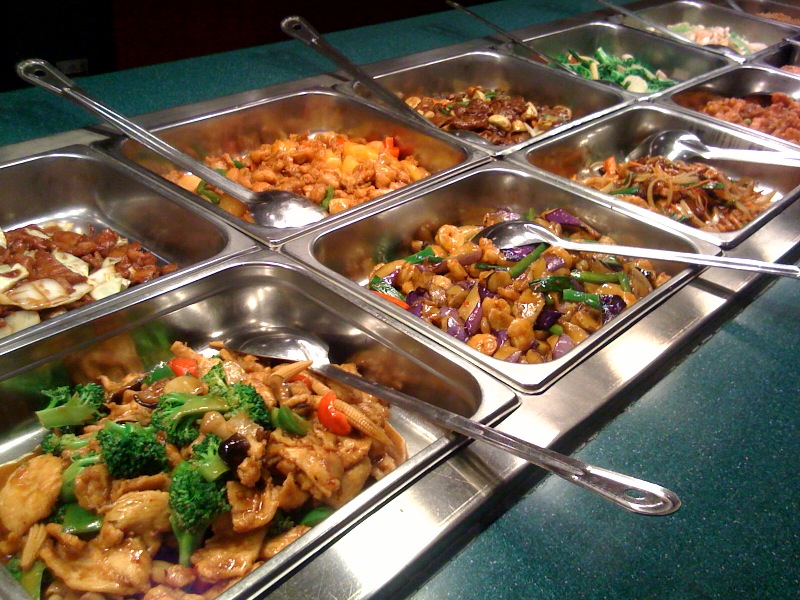 Let’s cut the crap: Buffets are disgusting. I’m not saying I don’t enjoy them, but they are pretty gross. Certain types of foods seem to get about 1,000% more revolting when offered buffet-style (Chinese, pizza, etc.).

Sometimes, what’s even more disgusting than the food itself is the folks who descend on these buffets to do the unthinkable. Take a look at these tales of gluttony from AskReddit, and maybe you’ll think twice the next time you plan on heading to Chop Suey #1 Family Buffet.

A few years back when Golden Corral first got the chocolate fountains, I went there and was going to try it out. As I was walking up to the fountain and I started to contemplate what I was going to have, a toddler takes his drink and just pours that motherfucker into the fountain and ruins it. So anyways, the manager comes over and is going ballistic because they had just set it up for the day and now they would completely have to replace the chocolate. Shortly after, this man comes up and decides he wants some chocolate brownies, but he can’t as the machine is being purged in the back of the place, so what does he do? The guy just puts his tray down and leaves the restaurant, goes to the toddler’s family’s car and slashes their tires. He was never caught after that.

That man was a different kind of devoted that the world needs.

7 years of pizza buffet experience. I’ve seen salad bowls full of ranch. I’ve seen huge gluttonous Southern Baptist preachers with a stack of pizza because they’re too fat and lazy to make that many trips. We had a regular who came in 2 times a week. We called him “belly shirt guy” who would stack a whole pizza on each plate per trip on top of unlimited pasta. His gut hung down below his shirt. Great turn around for him though because he started eating salads every trip. By the time I left the man has lost a good 75 lbs and actually looked healthy.

I don’t work at a buffet, but I was that guy.

I’d been backpacking on the Appalachian Trail for a couple months (it’s a 2,100 mile hiking trail that runs from Georgia to Maine, along the US Appalachian Mountain range). Been eating nothing but ramen & instant oatmeal since Gatlinburg. I was getting hungry, OK? I was having dreams about meat.

So my friend and I hiked down from the trail to this tiny town, Catawba, Virginia, that only has one restaurant, the Homeplace—All You Can Eat Fried Chicken.

We walk in. We sit down. A waitress brings us a platter of fried chicken and a basket of homemade biscuits. And whenever we start running low, she brings another platter.

It’s not like most buffets, where the food’s crappy and watery and sugary but at least it’s unlimited. No. It’s the best damn fried chicken I’ve ever tasted. Crisp and juicy and greasy and just perfect.

Me and my pal gorge on fried chicken. Eat at least 5lbs each. I’m starting to feel very uncomfortable, so when the waitress shows up with the next platter, I wave her off. She clears the table.

And then she comes back carrying a motherfucking blackberry cobbler.

So we polish off the cobbler (it would have been impolite not to), pay our bill, grab our backpacks from the foyer & stand on the porch, contemplating the 1,500′ climb back up to the trail. And it becomes obvious that there is no conceivable way we are climbing back up to the trail tonight.

So I go back inside and ask the hostess if there’s anywhere to camp here in town, and she tells me, “you’re welcome to sleep in the gazebo out back.” Apparently, this happens all the time.

EDIT: we were not the only hikers in the gazebo that evening. These two other dudes came in later and ate harder and had to sleep it off with us.

I watched a fight break out between a customer and a manager at an all you can stack restaurant.(You pay for a plate, and you can take as much as you can stack on a single plate) Anyway this guy had his plate stacked about 12+inches high with food. As he was reaching for a serving spoon he dropped his plate. He demanded another and the manager got pissed and told him he shouldn’t have stacked it so high. He refused to give the man a refund, he pointed to a sign that said something about paying for dropped food. Apparently wasn’t the first time this had happened.

My little brother nearly got kicked out of a Ryans steakhouse. When he was like 12 he had a crazy high metabolism and put away like 5 steaks from their buffet at once. Went to get a 6th one and the guy grilling them up forbid him from getting another one. Manager was called, my dad got pissed, brother got his 6th and 7th steak. Was a good night

Once witnessed a man eat 4 plates of food piled high (I’m talking southern food, so it was all fried foods) claim he was having a heart attack and clutch his chest, then let the biggest, most foul smelling fart I have ever experienced.

After he laughed about it, he continued to go back and eat two more plates of entrees, and a plate of desserts.

Not an employee, but still relevant.. when I was a kid, my mom, dad and I would go to a Chinese buffet quite often. My dad would put a mountain of food on his plate then never finish it. He’d then proceed to lay down in the restaurant floor and take a nap.

He also did the mountain of food thing at other places like Golden Corral, but he only laid down in the floor at the Chinese place.

Watched a woman come in, go right to the dessert section, and pick up 4 plates of pumpkin pie. Then, as soon as more plates of pie are set out, she gets up before shes even finished eating the four slices she’s already grabbed, cuts right in front of a kid about to grab a slice, and picks up 4 more plates.

I should mention she didn’t even finish them all. There were like 2 and 3/4 slices of pie on her table when she left.

Not an employee, but I know someone. Let’s say she may or may not be my mom. Goes in the cupboard before the trip to the buffet and grabs a handful of the big freezer bags and shoves them in her massive purse. Flash forward, we’re leaving, in the parking lot, on the way out to the car, and the freaking strap on her purse broke from weight. It was closed, so nothing fell out, but jeez. It’s not like [this family] had to worry about where the next meal was coming from or something. It was more about the thrill of “the hunt”.

Lady came in with two small kids. Said she wouldn’t pay for two kids because they wouldn’t be eating. We were curious where the kids went at one point and found she was feeding them under the table like dogs.

Not an employee but:

I once saw a really fat dude at a Chinese Buffett smear ranch dressing from his wrist to elbow then as he ate he brushed the food along the dressing before putting into his mouth.

Dude came in for lunch buffet and ate a pretty good amount. Fell asleep in his booth for a few hours then ate buffet again for dinner.

I’m not an employee, nor do I frequent buffets, but my senior lunch in high school was a trip to Golden Corral. As soon as I walk in, I see a large, obese woman hunched over a table close to the buffet, eating fried chicken, placing the near bare bones onto her plate, and stroking her hair back with chicken grease caked fingers. She had a few plates stacked on top of each other with the remnants of chicken bones poking out between the plates.

There was a guy we called six pan man. He would go to the pizza buffet slide an entire pizza on his plate, and sit down and eat it. Then get up and do it again until he ate 6 whole pizzas.

15. Ingenuity at its most disgusting

Not an employee but at a golden coral once I saw a family come in. Mom, dad, one kid and one baby. The mom got a high chair on wheels for the kid, and the left the kid in a car seat at the table. She pushed the high chair to the buffer and proceeded to stack plates on it like her own personal table on wheels.

She never put the kid in the high chair.